The above information is positive. Let's see how it tracks with the ISM index: 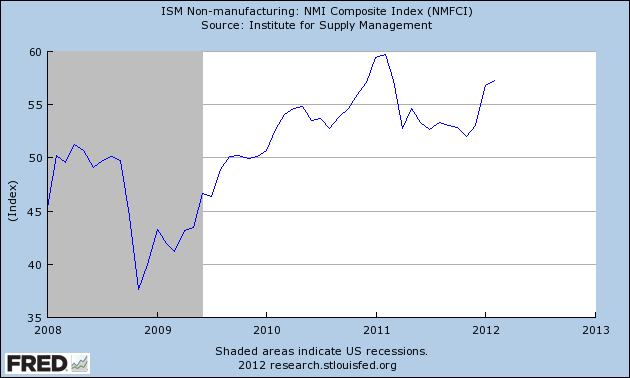 The overall ISM services index is currently at its highest level in a year.  Also note that even when the economy slowed down last fall, we don't see signs of a contraction in the ISM index 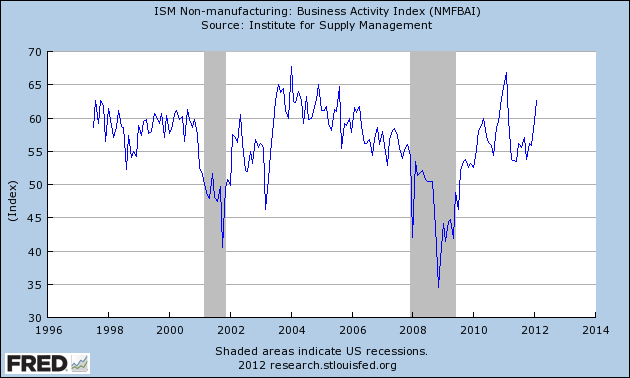 Let's go to the latest report:

The report was issued today by Anthony Nieves, C.P.M., CFPM, chair of the Institute for Supply Management™ Non-Manufacturing Business Survey Committee. "The NMI registered 57.3 percent in February, 0.5 percentage point higher than the 56.8 percent registered in January, and indicating continued growth at a faster rate in the non-manufacturing sector. The Non-Manufacturing Business Activity Index registered 62.6 percent, which is 3.1 percentage points higher than the 59.5 percent reported in January, reflecting growth for the 31st consecutive month. The New Orders Index increased by 1.8 percentage points to 61.2 percent, and the Employment Index decreased by 1.7 percentage points to 55.7 percent, indicating continued growth in employment, but at a slower rate. The Prices Index increased 4.9 percentage points to 68.4 percent, indicating prices increased at a faster rate in February when compared to January. According to the NMI, 14 non-manufacturing industries reported growth in February. The majority of comments from the respondents reflect a growing level of optimism about business conditions and the overall economy. There is a concern about inflation, rising fuel prices and petroleum-based product costs."