We are continuing to see breakout strength in a number of  short leading indicators, as well as housing. The continued elevated reading in new jobless claims is the one contrary signal.

As usual, clicking over and reading helps put a little $$ in my wallet, and brings you up to the virtual minute in how the economy is doing.

Strength in housing and cars, oh my!

The two consumer goods which turn down before recessions, and up before recoveries, are houses and motor vehicles, in that order.

Since January housing permits and starts came out yesterday, let’s take a look at both.
First, while housing starts retreated slightly from their December levels, the more leading and less volatile permits, and the even less volatile single family permits, both made new 14 year highs. The below graph normalizes all three series to 100 as of yesterday’s report, better to show the long term context:

Starts were not so high as in prior booms, but permits were higher than at virtually all past periods except for the early 1970s and the early 2000s bubble.

That’s really strong, and as I’ve said many times over the past half a year, bodes really well for the broader economy in 2021 once the pandemic is brought under control.
Second, it’s a similar story when we turn to motor vehicles. The below graphs normalize both cars and light trucks (blue) and heavy trucks (red) to 100 as of their most recent January data:

Both are closing in on, but not yet at, their prior peaks.
The below is the same information zoomed in on the past 18 months:

Heavy trucks are back about 3/4’s from their worst pandemic levels, and cars and light trucks about 90%.
In short, both of the most important household purchases have returned to close to or have even exceeded their pre-pandemic levels. I am confident this strength is going to expand into the broader economy over the next 3 to 6 months unless there is an unexpected setback in the abatement of the pandemic.

Jobless claims: huge upward revisions for the second week in a row

The “relatively good” news is that, despite the upward revisions, the recent increases seem to have plateaued. At the same time, both adjusted and unadjusted claims remain above their worst levels at the depths of the Great Recession.

Meanwhile continuing claims, which historically lag initial claims typically by a few weeks to several months, made new pandemic lows yet again this week. Seasonally adjusted continuing claims declined by 64,000 to 4,494,000, while the unadjusted number declined by 93,576 to 4,945,014:

I had suspected that we would see an upward reversal, but obviously that hasn’t happened. Continued claims remain at a level last seen in autumn 2009, only about 6 months after their worst levels of the Great Recession.
Although I am concerned by the huge upward revisions in the past several weeks, I remain hopeful that the disciplined approach to the pandemic by the Biden Administration, together with the onset of better weather in spring (fewer indoor activities), and more vaccinations, will mean that we either have, or are about to have, put the worst of the job losses behind us.
Posted by New Deal democrat at 8:04:00 AM

If real retail sales (reported on in the prior post) is the best proxy for the health of the consumer, Industrial production, the King of Coincident Indicators, is the same for production.
And the news there was also very good. Overall production rose 0.9% in December, and the manufacturing component rose 1.0%. As a result, overall production is only -1.9% below its level just before the pandemic hit last February, while manufacturing is only down -0.8% since then:

At the current pace, manufacturing should be *up* YoY in one month, and overall production in two.
Manufacturing, along with housing, has been the very best sector of the economy since the bottom of the pandemic recession last April, and it continues on a very good trajectory now. As I said with retail sales earlier this morning, this is yet more evidence of an economy primed to soar once the pandemic is brought under control.
Posted by New Deal democrat at 8:31:00 AM

This is simply very good news, and adds to the evidence that, once the pandemic is under control, the economy is going to accelerate.
I also use retail sales as a very good short leading indicator for employment. Because the series is somewhat noisy, I use the YoY% change (which was up 6.0% in real terms)  to anticipate what is likely to happen with the jobs numbers several months down the road. And once again, the news is good, both for overall jobs (red) and for the more granular number of aggregate hours of employment (gold):

The YoY growth in sales in the past 5 months has been equivalent to that during most of 2010. While neither jobs nor hours growth matched the growth rate quickly thereafter, the comparisons consistently got better and better.
Because temporary help jobs lead overall employment, the below graph again compares sales (blue), jobs (red), and temporary help jobs (green) YoY:

Because of this month’s good news is retail sales, I expect to see further gains in temporary help in next month’s jobs report (perhaps turning positive YoY), which is already presaged by the weekly Temporary Staffing Index having turned positive in the past several weeks.

For the past 2 months I have written that “I continue to expect employment to continue to rise - with a lag, and quite possibly a pause during this winter as the pandemic continues to rage - to match the level of sales.” Last month I added that “we certainly got the ‘pause’ in December’s employment report, and if we get more initial jobless claims reports like yesterday’s, a further downturn. But I still expect employment to rise to meet sales once the winter surge in cases and shutdowns of outdoor activities including dining both abate.” That is still my opinion, reinforced by this morning’s retail sales report.

My long leading forecast for all of 2021

I have a new post up at Seeking Alpha. Usually after Q4 GDP is posted at the end of January, I update my long leading indicators for the next 12 month outlook.

I’m about 3 weeks late this year, mainly because the pandemic remains in control of the economy. But with vaccinations picking up steam, and the prospect of many people resuming more normal kinda-sorta activity in the next few months, it’s worthwhile to take a more comprehensive look at what is likely to happen once the logjam breaks.

As usual, clicking over and reading should be informative for you, and puts a penny or so in my pocket as well.

On the effects of COVID vaccination, Israel is the bellwether

I’m beginning to see some clickbait reports of COVID diagnoses after two doses of the vaccine, together with breathless reporting by some RW’ers and LW’ers that the vaccines are not very effective. I’m here to tell you to beware these headlines and reports.
For example, here is a report out of Oregon that 4 people were diagnosed with COVID after their second doses of vaccine. Sounds scary, right? But if you read carefully, you see that while the *diagnosis* was made more than 14 days after the 2nd dose of the vaccine. That doesn’t mean that the *infection* occurred more than 14 days after administration of the 2nd dose, which would be more significant. In other words, it is perfectly likely that the infection started before the 2nd dose took full effect.
Further, of the 4 cases reported, two were mild - and two were completely asymptomatic. None of them were hospitalized, let alone died.
Fortunately, within the next 30 to 60 days the world is going to get some excellent data on the real effects of vaccination. That’s because Israel is on track to have its entire adult population fully vaccinated by that time.
The population of Israel (including children) is roughly 9 million. So far, 6.5 million doses of the Pfizer vaccine (which requires 2 doses) have been administered. At the current rate, in about 8 weeks close about 14 million doses will have been administered, meaning the entire adult population will be vaccinated. In 10 weeks the vaccines should have taken full effect.
Here is where things stand in terms of new infections, deaths, and total vaccines administered in Israel: 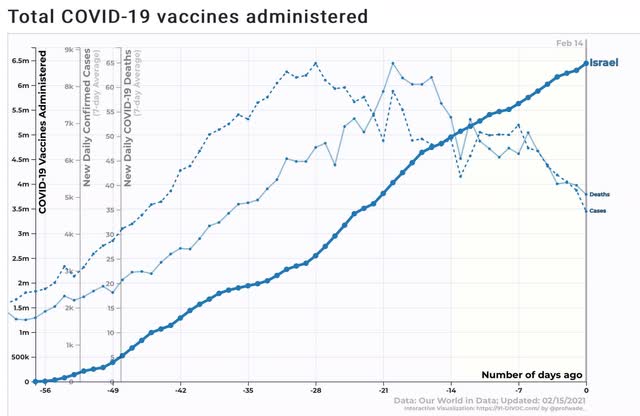 If all goes well, new deaths should continue to trend down, and be close to zero in about 10 weeks. That would be a spectacular result. If it doesn’t happen, then we will have to see where there might be problems.
By the way, don’t assume that the recent decline in new infections has to do with vaccination, because there have been similar declines pretty much everywhere in the northern hemisphere: 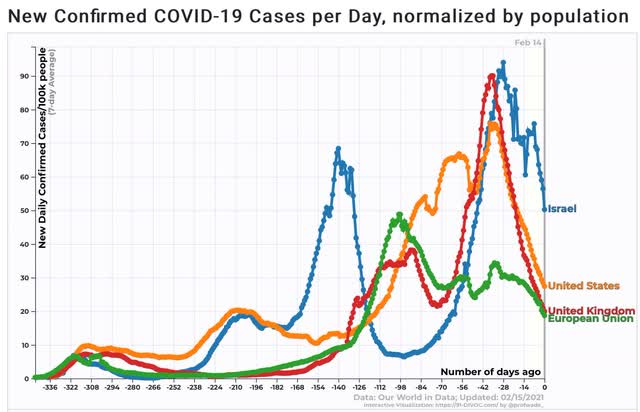 It very much looks like there was a spike caused by get-together over the winter holidays, which has now (relatively speaking!) ebbed. Note that the US is the only country with a secondary spike that just happens to exactly coincide with 2 weeks after Thanksgiving.
To return to my main point, in the meantime, Israel has performed a study of 1.5 million people, half of which were vaccinated. Here is the spreadsheet of infections, hospitalizations, and deaths for those vaccinated:

After 14 days after the 2nd dose, there were ZERO deaths among those under 60, and 4 deaths among those over 60. Again, it’s not clear if *any* of the *infections* actually took place that far out.
All of the available evidence so far is that these are *excellent* vaccines, but they don’t make the recipients, especially those over 60, “bulletproof.” Until there is herd immunity, older people in particular should continue to wear masks, and avoid indoor dining (where the new very infectious mutations can be very efficiently spread by younger people who are not yet vaccinated and are not wearing masks).
Posted by New Deal democrat at 9:07:00 AM