Weekly Indicators for November 25-29 at XE.com

This week's Weekly Indicator piece is up at XE.com .  This was another very positive week, but with consumer spending turning more cautious.

As always, if the link doesn't take you directly to the piece, click on "Forum" at the far right of the top toolbar, then click on "Market Analysis" and it should be the first or second item on the list.
Posted by New Deal democrat at 9:20:00 AM

Since July, I have been using the change in the price of a gallon of gas as a simple method to forecast that month's CPI in advance. My point has been, that all you really need to know about inflation is the price of gasoline. So far each prediction has turned out to be within 0.1% of the actual number.

For October I predicted a decline of -0.1%, which was the actual reported result, making the YoY inflation rate +0.9%, also exactly as predicted:

On Monday the E.I.A. reported gas prices for the final week of November, so we can estimate November's inflation rate now. My method is to take the change in the price of a gallon of gas and divide by ten, then add 0.1% to 0.2% to account for core inflation, or else divide by 16 to be more conservative, to arrive at the non-seasonally adjusted inflation rate.

The seasonal adjustment for November last year was +0.3%. This gives us a final seasonally adjusted inflation rate that rounds to +0.3%.

This inflation rate remains subdued enough to suggest that real YoY wages have probably increased again in November, although the monthly change is likely to be slightly negative:

Note, graph above is though October.
Posted by New Deal democrat at 11:19:00 AM

By the President of the United States of America

God’s help to us has been great in this year of march towards world-wide liberty. In brotherhood with warriors of other United Nations our gallant men have won victories, have freed our homes from fear, have made tyranny tremble, and have laid the foundation for freedom of life in a world which will be free.

Our forges and hearths and mills have wrought well; and our weapons have not failed. Our farmers, victory gardeners, and crop volunteers have gathered and stored a heavy harvest in the barns and bins and cellars. Our total food production for the year is the greatest in the annals of our country.

For all these things we are devoutly thankful, knowing also that so great mercies exact from us the greatest measure of sacrifice and service.

Now, Therefore, I, Franklin D. Roosevelt, President of the United States of America, do hereby designate Thursday, November 25, 1943, as a day for expressing our thanks to God for His blessings. November having been set aside as "Food Fights for Freedom" month, it is fitting that Thanksgiving Day be made the culmination of the observance of the month by a high resolve on the part of all to produce and save food and to "share and play square" with food.

May we on Thanksgiving Day and on every day express our gratitude and zealously devote ourselves to our duties as individuals and as a nation. May each of us dedicate his utmost efforts to speeding the victory which will bring new opportunities for peace and brotherhood among men.

In Witness Whereof, I have hereunto set my hand and caused the seal of the United States of America to be affixed.

DONE at the City of Washington this 11th day of November, in the year of our Lord nineteen hundred and forty-three, and of the Independence of the United States of America the one hundred and sixty-eighth.

I have a new post up a XE.com . October's housing permits report was the single best piece of US economic data since interest rates started backing up in April.

As usual, if for some reason the link doesn't take you directly there, click on "forum" at the right end of the toolbar, then click on "Market Analysis" and it should be the first or second topic in the list.
Posted by New Deal democrat at 10:30:00 AM 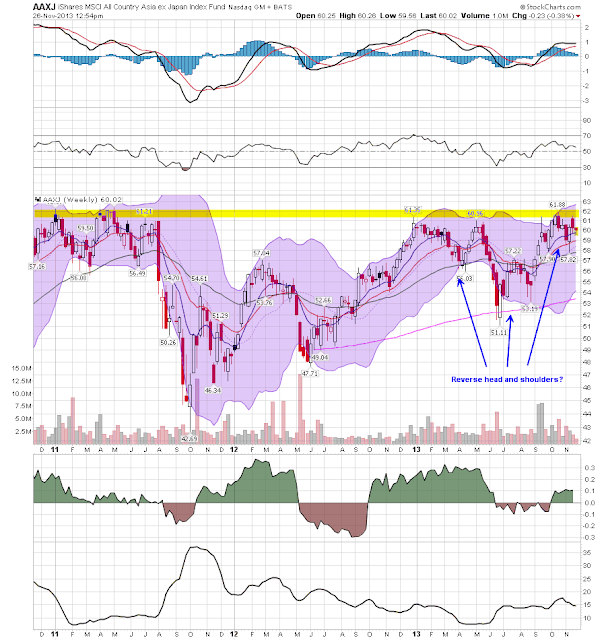 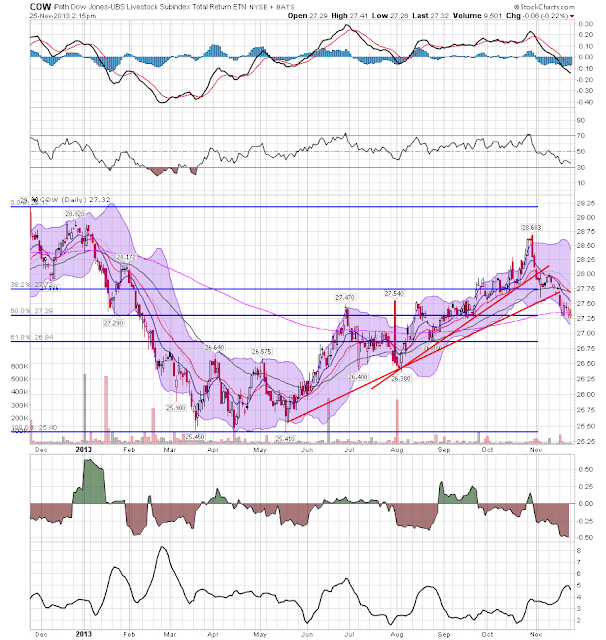 Over the last two weeks, prices have broken both trend lines.  This has been accompanied by a decline in momentum and a clear drop in volume inflow.

After I posted "A Plan to Keep Social Security solvent forever" last week, Bruce Webb, one of the authors of the "Northwest Plan" that keeps Social Security solvent exclusively by gradually increasing payroll withholding taxes, informed me that I had misconstrued their math.  Their plan does indeed call for withholding taxes to rise 2%, but it is 2% including both the employer's and employee's share.  In other words, the employee's share does not rise from 6.2% to 8.2%, but only to 7.2%.  The employer's share also rises to 7.2%, so the total tax withheld increases from 12.4% to 14.4%.

To reiterate the essence of what I wrote last week, I wanted to see what would be necessary if we made "baby steps" extremely small and gradual changes in each of the proposed fixes for Social Security.  Once the present issue of Boomer retirements is dealt with, the plan relies upon using the Social Security Trustees' Report projecting the condition of the fund 20 years out, and automatically making small adjustments each year in the direction needed to balance the Fund over that time frame -- including rebating withholding taxes paid if the Trust Fund is overfunded.

Specifically, in every year where the Trustees report that the Fund will be underfunded by at least 5% 20 years out, the following measures (none of which would apply to current recipients) are taken:

The process would get repeated every year until the Trustees report that the Fund is not projected to have any shortfall 20 years out.  Raising the amount of income captured to 90% of all income in 1% annual steps should be done regardless of the status of the other steps, since that is the level of income that in earlier times was subject to withholding.

Based on my understanding of the revenue that would be generated by a gradual increase in withholding taxes, I estimated that it would require about 5 years of such baby steps to bring the current shortfall in the Trust Fund to zero.

But now we know that increases in the withholding tax rate would bring in double the revenue I originally estimated.  Based on this, under the above formula it appears that only 3 years of "baby steps" would be needed.  If the plan were to take effect in 2014, then by 2017, tax withholding by employees would be increased from 6.2% to 6.5%, the retirement age far full benefits would be raised by 3 additional months, and only a 3% cut in benefits implemented over 13 years to new retirees would be necessary.

Suppose an actual cut in benefits, even of 3%, is a bridge too far.  We can still overcome the current anticipated shortfall by increasing withholding taxes by 0.4% to 6.6%, implemented over as long as a 20 year period, and gradually increase the retirement age for full benefits by an additional 4 months, so that by 20 years from now, the retirement age for full benefits would be 67 years and 4 months.

This is a far cry from the fiscal Armageddon that is constantly trumpeted in the mainstream media, and far more generous than the "death by 1000 cuts" permanent change to a chain-weighted CPI which has been touted by President Obama.

Now that we've put the Trust Fund in permanent actuarial solvency, we still have to deal with how the general fund should pay back the Trust Fund for its borrowing over the last 30 years - a borrowing that, in one form or another, was inevitable and broadly legitimate.  As we'll see, that isn't as difficult as Doomers make it out to be, either.

Investors are pouring more money into stock mutual funds in the U.S. than they have in 13 years, attracted by a market near record highs and stung by bond losses that would deepen if interest rates keep rising.

Stock funds won $172 billion in the year’s first 10 months, the largest amount since they got $272 billion in all of 2000, according to Morningstar Inc. (MORN) estimates. Even with most of the cash going to international funds, domestic equity deposits are the highest since 2004.

The real tell for the rally will be in the IWMs and QQQs.  Consider the following charts: 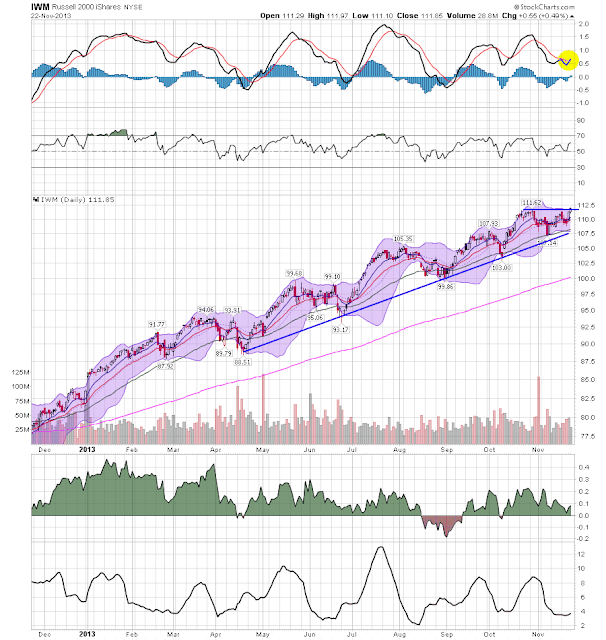 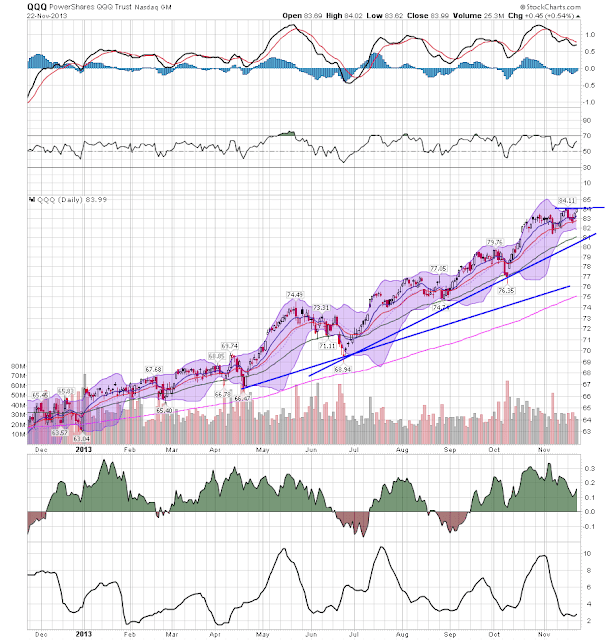 Both the IWMs (top chart) and QQQs (bottom chart) have been rallying since mid-Spring.  All the EMAs are moving higher indicating a short, intermediate and long term rising trend.  Both also have MACDs with have decreased but with both also printing or just about to print by signals.
Posted by Unknown at 6:00:00 AM