More on money supply - could both fall into negative territory shortly?

I have a follow-up post at XE.com about real M1 and M2.  Since last August both have really gone flat.
Posted by New Deal democrat at 8:35:00 AM

How serious is the deceleration in real money supply?

Last week in my weekly column I noted that real M2 has decelerated close to the point where it would stop being a positive for the economy.  Why?  I explain that in a lot more detail over at XE.com.
Posted by New Deal democrat at 9:46:00 AM

The Atlanta Fed's Macroblog has an interesting article today on whether a "high pressure" low unemployment economy leads to more capital investment. At least based on surveys, they answer in the negative, with companies pulling out the old chestnut of being unable to find qualified help "(at the wage we want to pay").

But the article reports on one survey only, and does not delve into any long term historical data. So of cuorse I did.

Here's what I found.  Annual data on real private fixed nonresidential data, and U-3 unemployment, can both be found back to 1948.

There is a high correlation, but there is no apparent leading relationship. In fact they look coincident. At best it appears that investment continues to expand even as the unemployment rate holds steady in mature expansions.

This is just a preliminary look. If I can find quarterly data going back a long enough time, obviously that would be better than annual data.

No, commercial and industrial loans are not a leading indicator

There are a number of Doomer sites I typically read, among other reasons because a few of them do link to interesting data series that turn out to be useful.  One such site is Wolf Street, where this morning I read the following:

C&I loans are a sign of what businesses of all sizes are doing – from the small company that is borrowing to buy a piece of equipment to the largest behemoth that is funding its inventories. These loans show whether companies in aggregate are expanding their investments or pulling in their horns.
....
This chart covers C&I loans going back to 1988, covering the last three recessions. The turning points are circled in red: 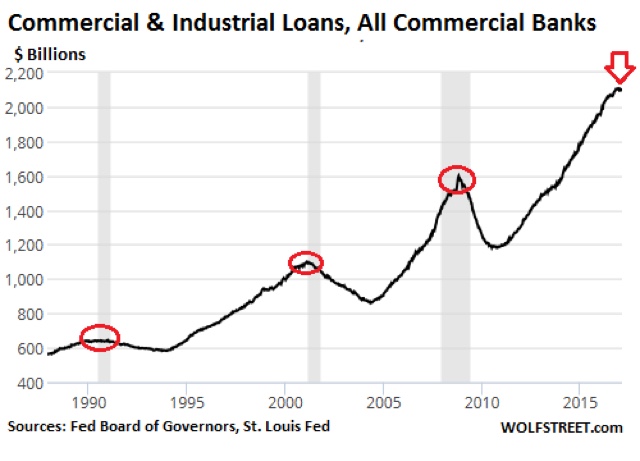 The turning point during the Financial Crisis was unique – a sudden deep collapse in credit, when the banking system began to seize, rather than a classic turning point that evolved over time, as the prior two turning points exemplified.

The timing of a turning point may not be perfectly aligned with the beginning of a recession, but it’s close.

Now, I was pretty sure that what happened during the Great Recession was actually pretty typical, but I had to go back and check.

Now we have expanded the number of recessions from 3 to 11.  And what do we find?  That in addition to 1991 and 2001, loans only turned down one other time in advance of a recession: in 1948. They turned down concurrent with the outset in 1972. The other 7 times, they only turned down after the recession started, if at all!

So much for a leading or concurrent indicator.

But, wait a minute, isn't the fact that they recently turned down still noteworthy?

When we look at the complete record, we see sporadic small down months in the midst of nearly all expansions.

Here for the umpteenth time is the lesson: beware any claim that only covers the last few cycles, especially when the data series has a much longer history.

But just to show you how these data expeditions can be useful, look what I found when I decided to include the rate of delinquencies on C&I loans (red):

That, my friends, just like the unemployment rate, is a leading indicator for downturns in addition to being a lagging one for upturns.  Only 3 cycles, so caution is warranted. After rising during the energy-led shallow industrial recession, delinquencies are now going sideways.


One of my recurring themes is how macroeconomic theory, no matter how elegant mathematically, consistently errs because it fails to take into account basic psychology -- i.e., how the human animal actually works.

A big component of this failure is that humans, like other primates and apparently like just about every other social species, are hard-wired to inflict punishment on "winners" from inequitable distributions, even at cost to themselves. For a hilarious example of this, see what happens when an experimenter rewards one monkey with a cucumber while feeding another a delicious grape.

One such failure to take into account elementary psychology was on display in an article a few days ago, wherein Larry Summers, in the course of lambasting the rubes for trying to undermine global trade, concluded:


A strategy of returning to the protectionism of the past and seeking to thwart the growth of other nations is untenable and would likely lead to a downward spiral in the global economy. The right approach is to maintain openness while finding ways to help workers at home who are displaced by technical progress, trade or other challenges.

To which the appropriate response is something like: "Well, you f*****g genius, how many decades have you had to study the problem??? What have you ever proposed?"

Since the real answer to that question is "nothing," we know that you actually don't care.  And there, the genius economist runs headlong into freshman level psychology.

Because, even if his defense of globalization is accurate, what the suffering middle/working classes have done is to serve notice that Summers' cherished economic progress will be destroyed until the benefits are equitably shared. There will be no "maintaining openness" until "help[ing] workers at home" is accomplished first.

In other words, the masses are saying, "Do we have your attention now?!?" Reading Summers in this article and Brad DeLong in virtually every article in the last several months, I would say, "yes, we do."

My Weekly Columns Are Up At XE.com