My Weekly Indicators post is up at Seeking Alpha. The old vaudeville sketch comes to mind: "Niagara Falls.  Slowly I turn. Step by step ...."

Not only are these weekly posts intellectually edifying, but since clicking over and reading it puts a penny in my pocket, it is the epitome of polite etiquette.


HEADLINES:
Here are the headlines on wages and the broader measures of underemployment:

The more leading numbers in the report tell us about where the economy is likely to be a few months from now. These were positive.
Other important coincident indicators help  us paint a more complete picture of the present:

The bottom line from this report is that employment is booming; wages still aren't.

Although the headline number was average, the revisions to the last two months made them even more positive than the original great numbers. Meanwhile the prime age employment to population ratio, involuntary part time employment, and the underemployment rate all reached their best levels of this expansion. Based on the U6 number, we are probably only about 0.5% away from "full employment."

Meanwhile, that big wage growth that was supposed to come because of that big tax cut for the wealthy and corporations last December?  Still hasn't happened. Don't hold your breath.

As I've written a number of times in the past year, an outsized jump in the rate of people entering the workforce -- which was very much in evidence in the numbers this month, and YoY is up almost 1% -- appears to be acting to depress wage growth in the short term.


As promised, here is a pithy rundown on the monthly data for July that was released earlier this week. As usual, let's take it in order of how it leads the overall economy.

This is the least volatile of any housing data, although it lags permits and starts by one to two quarters. The monthly number was down, but for now the positive trend is continuing, albeit not as strongly as in the past several years (blue is construction spending, red is single family permits):

As interest rates have ticked higher in the last several months, I expect permits to continue to be flat, and residential construction should follow in a few months.

Manufacturing began to pick up over two years ago, and has been very strong over the last 18 months (h/t Briefing.com): 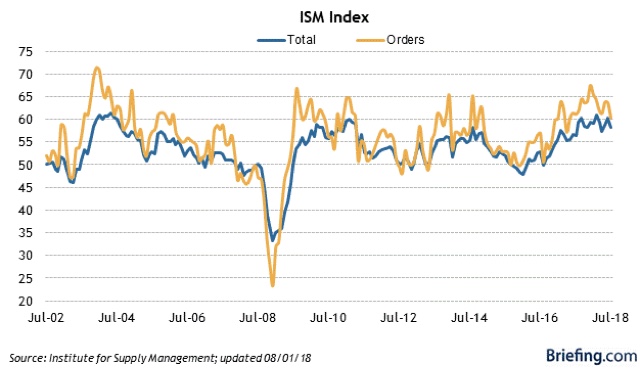 This month the leading new orders index cooled slightly -- from white hot to red hot. It's within the range of reasonable possibility that the "less hot" trend of the last few months is the beginning of the weakness in the long leading indicators beginning to bleed over into the short leading indicators -- something I expect to happen sooner or later -- so this is something to keep an eye on.

These tend to plateau during expansions, and meaningfully decline in the 6 to 12 months before a recession. This month wasn't so hot (h/t Bill McBride): 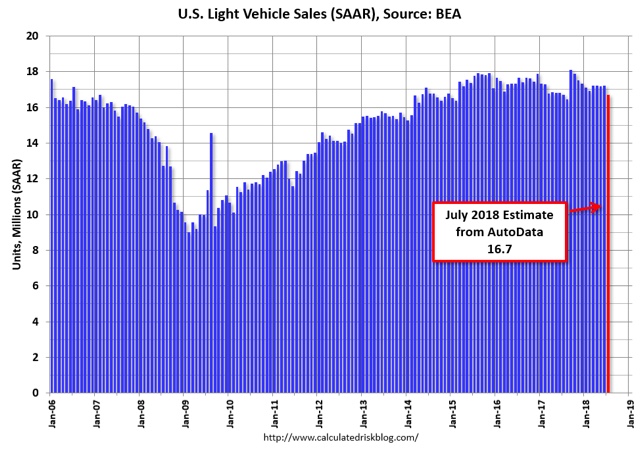 As I've said before, it would take a reading under 16 million units annualized for me to become concerned. Also, because GM is no longer reporting monthly, this metric has become much less reliable, so take with lots of grains of salt.

Everything I -- and every other -- observer has said about income over the last several years got thrown out the window last week courtesy of the GDP revisions. Ugh! *Nominal* GDP values for the last 5 years did not change significantly, but BEA decided that there was significantly less inflation than they had previously reported:

This is a classic coincident indicator, and confirms that the expansion is continuing.

As a result, "real" spending improved, and the decline in personal savings completely evaporated.

I hesitate to comment further, lest further revisions make those obsolete as well.

This is a quarterly report on *median* wages and benefits. As such it isn't subject to the "Bill Gates walks into a bar" type of distortion. BUT, it holds the distribution of jobs constant. In other words, it measures pay for, e.g., a constant percentage of engineers, or retail clerks, now vs. pay for engineers, or retail clerks, one quarter ago, and so on (h/t Briefing.com): 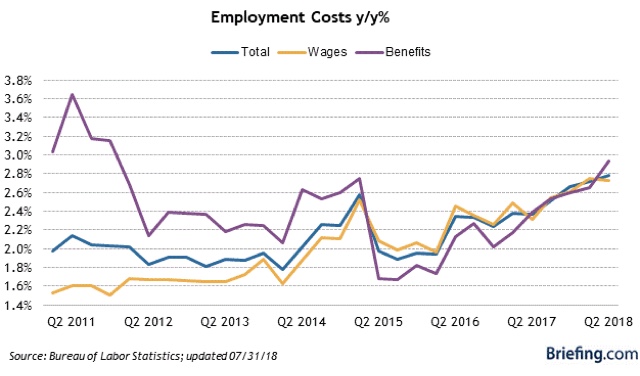 It is the one measure of wages that has consistently shown YoY improvements over the last few years, and continued to do so in the 2nd Quarter. Where it may be inadequate is to the extent that there are job distinctions based on seniority. Thus it may not be picking up on the very large demographic trend of Boomers retiring and being replaced by Millennials (old folks being replaced by young folks is a constant, but almost certainly has been happening disproportionately in the last decade).

Putting the data this week together, although several series declined month over month, all of them were indicative of an expansion that is continuing, and will continue in the next several quarters. And maybe even a little more spare change will be tossed in the direction of ordinary workers, which we'll find out more about in tomorrow's monthly jobs report.

My midyear update of the 8 long leading indicators, taking the forecast all the way through the middle of next year, is up at Seeking Alpha.

Btw, I don't have a lot to add to whatever you've read elsewhere on the data releases so far this week. So tomorrow I'll do a potpourri with pithy comments on each, OK?
Posted by New Deal democrat at 7:30:00 AM


I've pointed out many times that, generally speaking, mortgage rates lead home sales. It's not the only thing -- demographics certainly plays an important role -- but over the long term interest rates have been very important.

I have run the graph comparing mortgage rates to housing permits many times. In the graph below, I'm using a slightly different housing metric -- private residential fixed investment as a share of GDP, both nominal (blue) and real (green), current through last Friday's report on Q2 GDP. Here's the long term view:

We can see the leading relationship over the large majority of time frames in the last 50 years, with a few notable exceptions: the late 1960s and 1970s *huge* demographic tailwind of Baby Boomers reaching home-buying age, the 2000s housing bubble and bust, and 2014 (mainly due to the Millennial generation tailwind).

Here's a close-up of this same graph beginning in 2015:

The increase in mortgage rates since late 2016 (blue in the graph bleow) has had a larger effect on private residential investment than the 2013-14 episode, probably because house prices are higher in real terms, as shown in the below comparison with wages (red):

House prices were near their 2012 housing bust bottom the first time mortgage rates went up. Now they are about 20% higher in real terms.

Finally, here is a more granular view of Treasury and mortgage interest rates over the past 18 months:

The decline in mortgage rates back below 4% in the middle of last year is probably what sparked the big increase in housing permits, starts, and sales last autumn and winter.

But because mortgage interest rates have actually increased a little bit over the last six months, I'm not expecting a similar rebound in housing this autumn.


When my article on the yield curve was posted at Seeking Alpha last week, I got feedback that I ought to look at commercial bond yields as well, with some specific suggestions.

I did that, and I thought I would share the results.

One series that goes all the way back before the Civil War is the yield on commercial paper in New York. After 1971, it was discontinued, but AA-rated commercial paper rates took its place. Meanwhile AAA-rated corporate bonds (lower-yielding and less volatile than other grades) have been tracked since 1919.  That means that we can put together the relationship between short term and longer term corporate bond yields going back just one year short of a century.

In the below two graphs, AAA corporate bonds are shown in blue, the three sequential commercial paper rates shown in shades of red. I have overlapped those series as much as possible to show that the changeover makes no material difference.

This gives us a result very similar to that of the Fed Discount and Funds rates vs. long term Treasuries.  An inversion is always bad (except for 1966), but inversions don't always occur. Most importantly, note that commercial bond yield spread never did quite invert before the Great Recession.

It's noteworthy that even in those cases, a tightening by 1/2 of the highest term spread between long and short term yields always signals a recession within 2 years, with the very notable exceptions of the mid-1960s and the late 1990s. But again, there was no appreciable tightening before the 1938, 1945, and 1950 recessions.

Note, by the way, that this year corporate term spreads have decreased by more than 1/2 from their expansion high, indicating heightened risk (but not a certainty) of a recession within 2 years.

The bottom line I hope you take away from all of my writing about the yield curve is that, while it is a very useful metric, it is not foolproof, and ought to be used in conjunction with other reliable metrics emanating from other sectors of the economy.
Posted by New Deal democrat at 7:30:00 AM