My Weekly Indicators piece is up at XE.com.  Some of the bad news appears to be abating, while there a new, both positive and negative, crosscurrents.
Posted by New Deal democrat at 9:23:00 AM

The Fed vs. Millenials: inflation and the apartment boom

Just as with Boomers 50 years ago, the Millennials have reached the age where they are moving into their first residences.  This has created a boom in multi-unit dwellings: 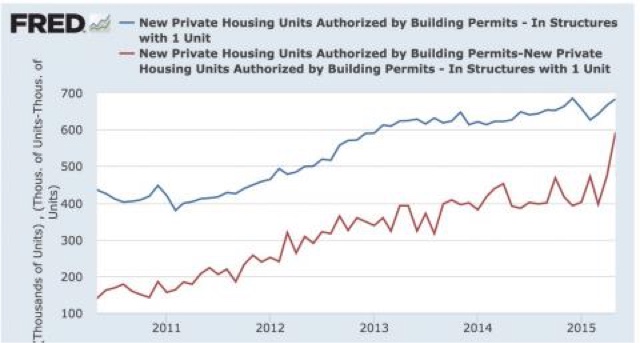 and has driven median asking rents to record inflation-adjusted highs.

At the same time, the CPI less shelter is the most negative it has been in 60 years (-1.3%) excluding the bottoms of the 1950 and 2009 recessions.  In other words, the only important driver of inflation right now is Owner's Equivalent Rent, as shown in this graph comparing CPI for housing (red) with CPI for everything else (blue): 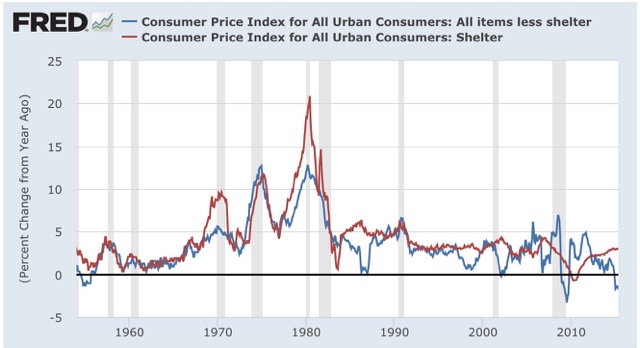 Notice what happened from the late 1960s through the early 1980s as the Boomer generation reached initial apartment/home buying age. The same contrast is appearing now.

Last I checked, shelter is a necessity.  So we have this huge demographic creating an increasing demand for shelter, which is driving up prices and construction, to alleviate the shortage.

If the Fed raises rates, all they are doing is making the shortage more acute (because shelter is a necessity and ultimately the demand must be filled), and hurting Millennials in the process.  Further, all that does is set the stage for even more inflation for shelter later on in the next recovery, just as it did in the 1970s.

In my opinion the Fed should relax its inflation target, specifically as to shelter, to accommodate this secular demographic need. As to everything else, at the moment inflation is a dead as the fabled parrot in the Monty Python sketch.

The shallow industrial recession continues - but no signal for general growth

Several days ago May industrial production showed another decline.  The consensus in the commentary was that this was due to continued weakness in the Oil patch and strength in the dollar.  I agree.   James Picerno also had a nice, lengthy article explaining why this ongoing decline isn't enough to be a recessionary red flag.  I agree with that too.

But it is worthwhile to show why Picerno, and the consensus, are correct, by comparing the various sectors of production, and comparing the current weakness in production with past episodes of weakness.

First, let's look at the sectors that make up the industrial production report.  In the graphs below they are manufacturing (red), mining (blue), and electricity (green).  Here's the overall look on the Q/Q% change for the last 20 years: 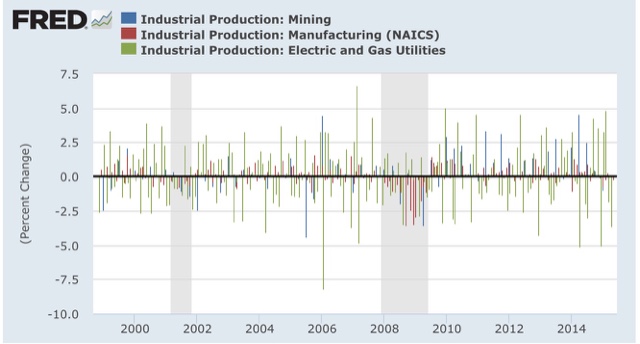 What I mainly want you to  notice in the above is how erratic the electricity sector is.  Current readings are no more erratic.  So let's take that out and just focus on mining and manufacturing: 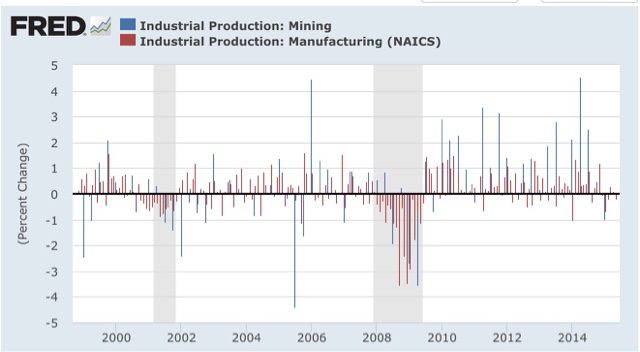 While manufacturing has shown a little weakness, the biggest difference by far is in mining -- and that's where the Oil patch weakness shows up, as well as coal and metals production for export (recall how awful rail and steel have been in the Weekly Indicators for the last 4 months).

Now let's compare the present weakness with past episodes.

Here is the Q/Q% change in overall industrial production in the period from 2000 to the present, ending with Q1:.i 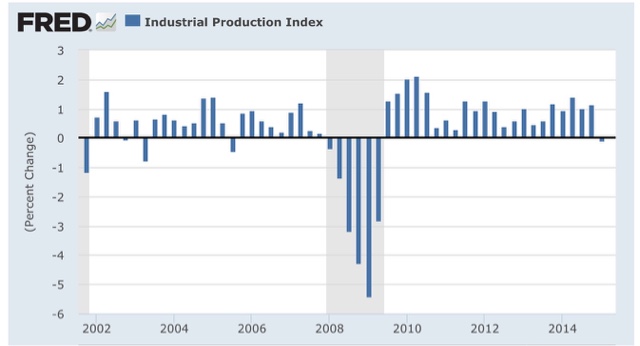 Note the decline in Q1 was less than -0.2%.  That's considerably less not only than prior declines associated with recessions, but even with declines where no recession occurred. 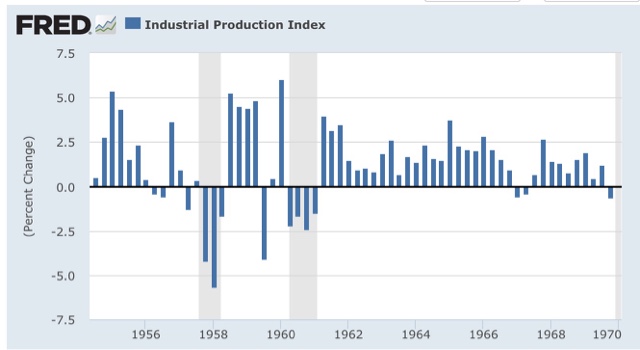 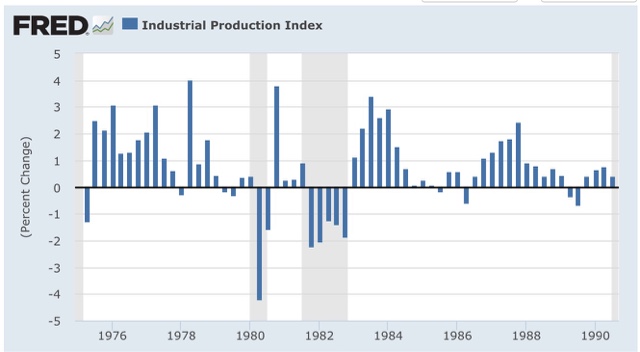 Again, note that the Q1 decline in industrial production was almost trivial compared with other declines whether or not associated with prior recessions.

Finally, let's look at the recent m/m% change, to include April and May: 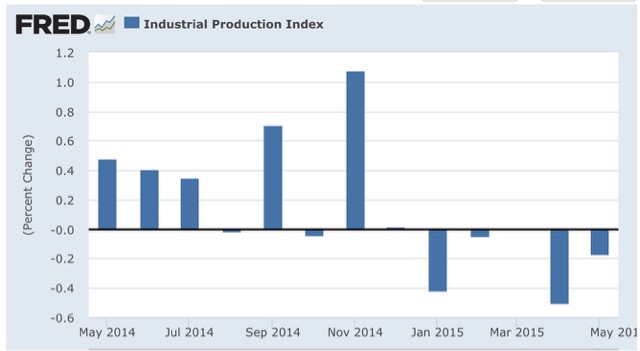 So far the decline in Q2 is a little bigger than that in Q1.  But still not enough to compare with past episodes of weakness that were associated with recessions.  In short, this shallow industrial recession is not derailing the robust overall economy.

I have a new post up at XE.com about his morning's housing report, which was a blowout!  But don't get too excited.
Posted by New Deal democrat at 11:37:00 AM

US Equity and Economic Review For the Week of June 8-12; Yes, the Rally Is Getting Long In the Tooth, Edition