Trends in real per capita income

In the last several weeks, I have done extensive research on trends in real, inflation adjusted Income per capita over the last 20 years, starting with 1993,  Translated from economics into regular english, what I have been looking at is how well each individual American, and also each individual *working* American fared in terms of income over that period.

Real personal income minus transfer payments (Social Security, etc.) is one of the 4 generally accepted markers for whether the economy is in a recession vs. an expansion.  Calculating per capita real personal income is easy, courtesy of the St. Louis FRED, and here it is (blue), and I've additionally shown personal income divided per capita only by the civilian labor force rather than by the population as a whole (red): 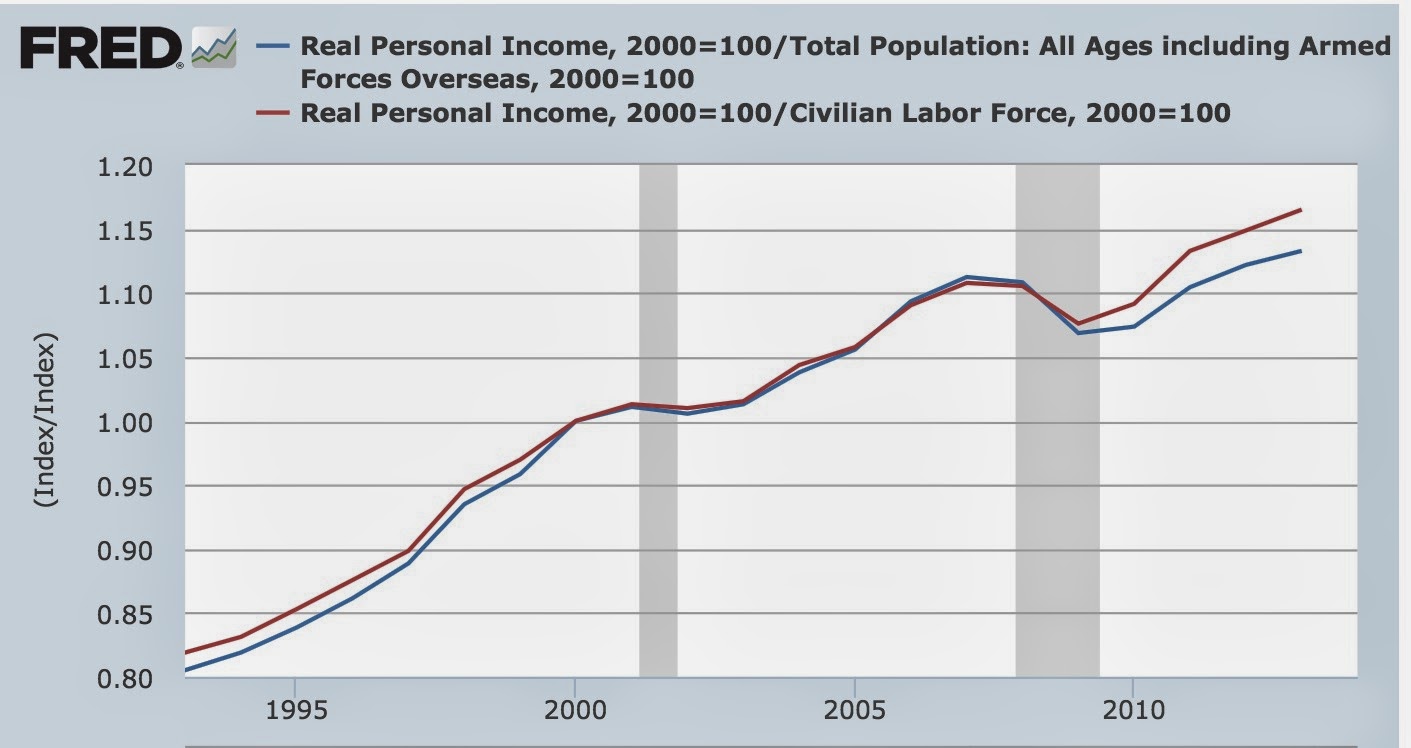 In general, the civilian labor force tracked population growth until 2008, and since then has grown much more slowly than population as a whole, chiefly because of the onslaught of Boomers retiring.

In any event, whether we adjust by population as a whole, or by just the labor force, per capita real personal income has generally grown throughout the last 20 years.

Still, by virtually any measure, incomes since 2000 have generally been below that year.  That is partly because of demographics, since labor force participation starts to decline slightly after age 55 and more significantly after age 60, as shown in this graph (h/t Doug Short): 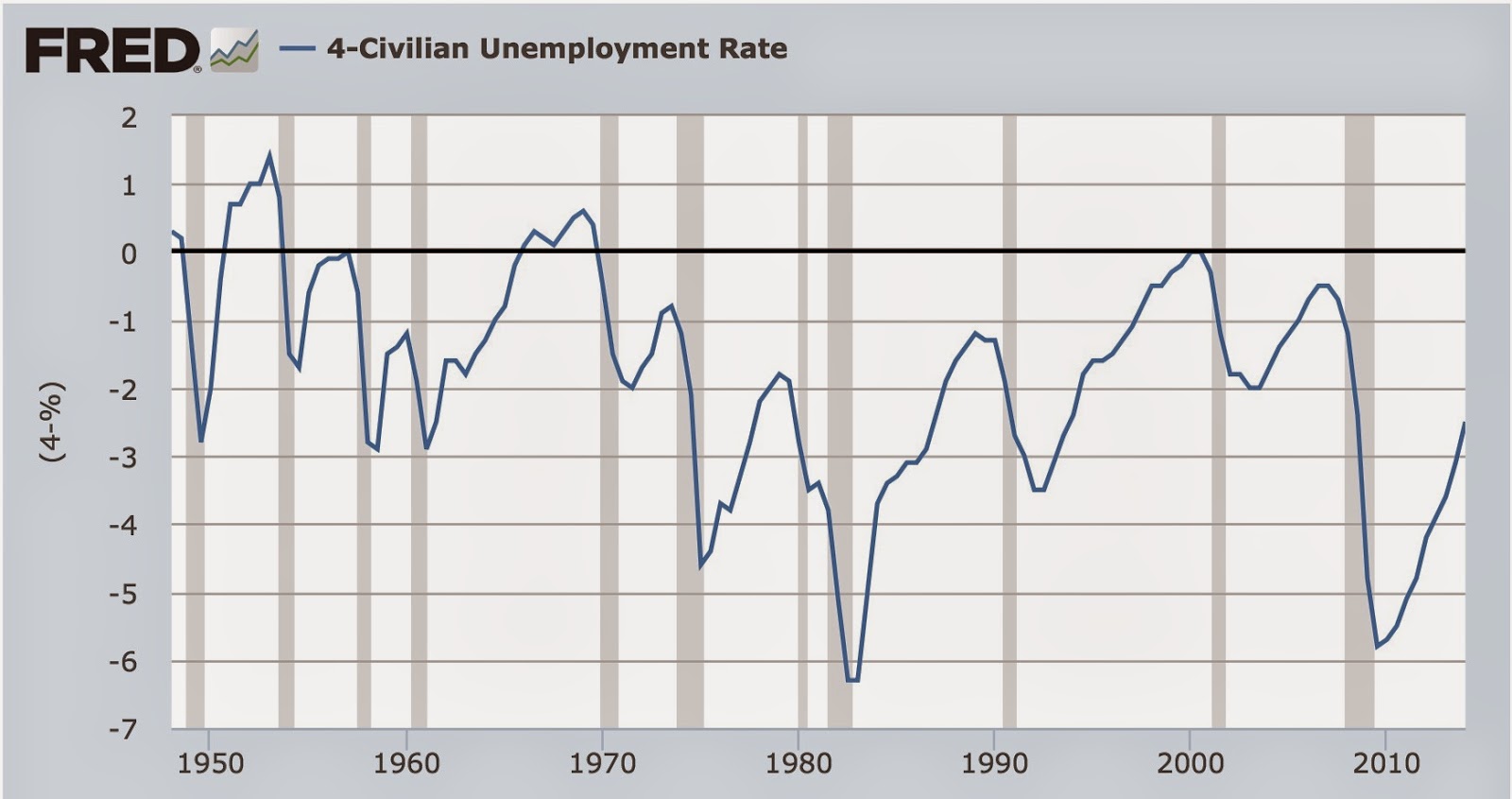 A smaller percentage of the population has been earning wages and salaries since the turn of the Millennium, and so median and average income has suffered.

Several weeks ago, David Cay Johnston wrote a column in which he used 2000 as a benchmark, and cumulated average and aggregate per capita adjusted gross income since then through 2012.  I criticized the column, and he objected to the criticisms.

As I read the column originally, the main point of the article appeared to be that Americans are having a tough time because wages have stagnated, and the discussion of income and the Bush tax cuts in the second part of the article were evidence offered in support.

I have subsequently been advised, if I understand correctly, that the first part of the article (including the discussion of wages) was only introductory, and the main point of the article was:
1.  Bush promised that his tax cuts would deliver prosperity for all.
2.  Bush promised that the prosperity for all would include rising incomes, even including demographic changes that were well known.
3. Therefore it is appropriate to measure Bush's promise by using the measure of income, and declines in reported income due to demographic changes do not matter, since Bush promised they would not matter, (and possibly agreed that the appropriate yardstick was a comparison with 2000).
4. Looking at income as reported to the IRS, not only was there not prosperity for all, but the average taxpayer LOST income.
5. Therefore, by Bush's own yardstick, his tax cuts were a failure and different policy choices should be made.

If this is all true, then my criticism of the article as to conflating wages with income, and not adjusting for demographics, is moot, as they are not relevant to that yardstick.   Thus, while the writer did not adjust for Boomer retirements, had he done so, the outcome, as indicated above, is the same.

Viewing the matter not by any unique Bush yardstick, but as a matter of general economic trends, it seems clear upon my reading that most readers did in fact confuse wages and income. In such discussions, a clarifying statement that to the effect that wages have stagnated, but partly due to demographics (retiring Boomers) and partly due to increased unemployment, income as reported by taxpayers has declined, would be easy to include.  I think it is a reasonable contemplation that the confusion evident among the comments I read, was a probable result of the omission of such a clarifying statement. Regardless, if the purpose of the article is as I have described it in 5 points above, then the issue of wages and demographics are simply not applicable in terms of an examination of what is said to be Bush's own yardstick.

But to summarize in terms of economic data vs. a particular political yardstick:

1. The trend in real per capita personal income has been rising over the last 20 years, including since 2000.
2. The trend in real per capita adjusted gross income reported to the IRS has also risen generally in the last 20 years, but in much more variable fashion, with extended periods between old and new peaks.
3. The year 2000 marked the peak of the 1990s tech boom.  Only as measured by that specific year, or to a much smaller degree, using 1999 as the benchmark, does a subsequent cumulative decline appear.  As a matter of general economic discussion, whether measuring subsequent multi-year periods by reference to that specific year is appropriate or not, I leave to the reader.

This is over at XE.com's Currency Blog

http://community.xe.com/blog/xe-market-analysis/international-week-review-us-housing-market-continus-stall-edition
Posted by Unknown at 10:18:00 AM

This week's installment is up at XE.com.

Bon-Ton Stores Are Shortable Below the 9-10 Price Range 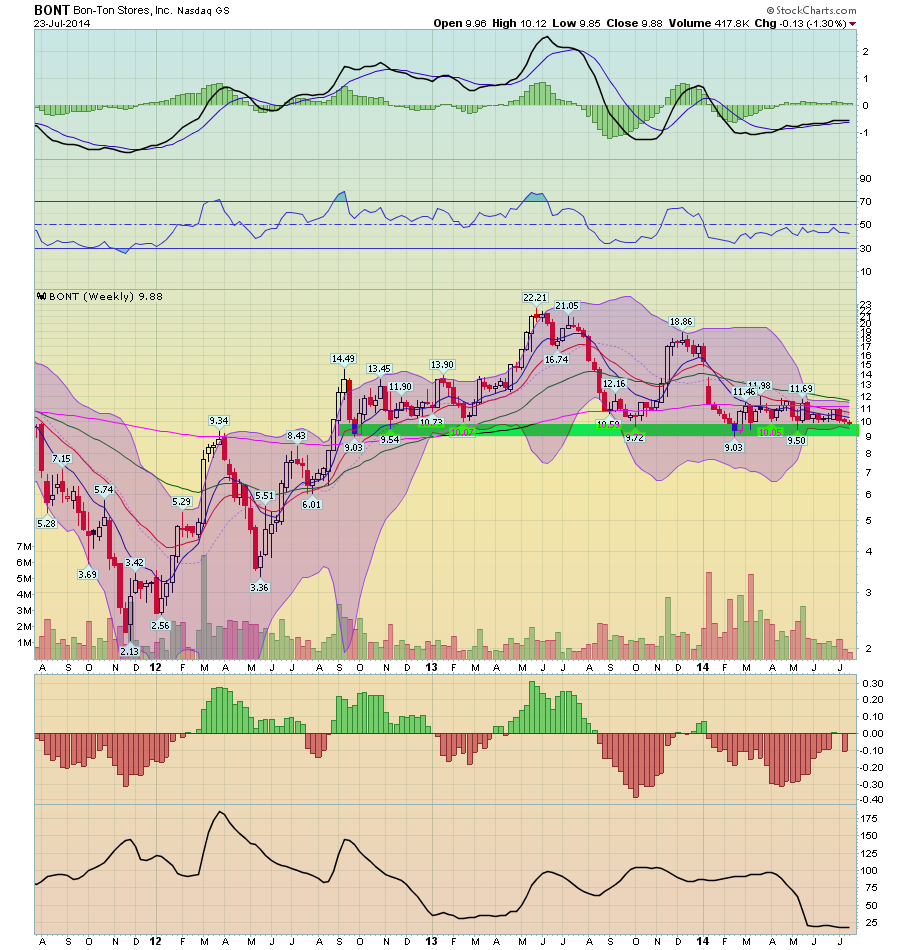 The chart above is a weekly chart of the Bon-Ton stores.  Going back about a year and a half, the 9-10 dollar price range has provided tremendous support for the stock.  The stock has also had trouble developing any upward momentum.    It's only had two meaningful rallies in the last two years, and both fizzled out.

The chart tells us that if prices move below the 9 price range there is downside opportunity.  Let's look at the reasons why.  First, BONT is a department store, as explained in their latest 10-K:

The Company, a Pennsylvania corporation, was founded in 1898 and is one of the largest regional department store operators in the United States, offering a broad assortment of brand-name fashion apparel and accessories for women, men and children. Our merchandise offerings also include cosmetics, home furnishings and other goods. We currently operate 271 stores in 25 states in the Northeast, Midwest and upper Great Plains under the Bon-Ton, Bergner's, Boston Store, Carson's, Elder-Beerman, Herberger's and Younkers nameplates, encompassing a total of approximately 25 million square feet.

I really dislike retail for a number of basic reasons: margins are very low (meaning fixed costs are very high), competition is intense and the US consumer is still luke-worm on spending, especially on non-durables (BONT's bread and butter): 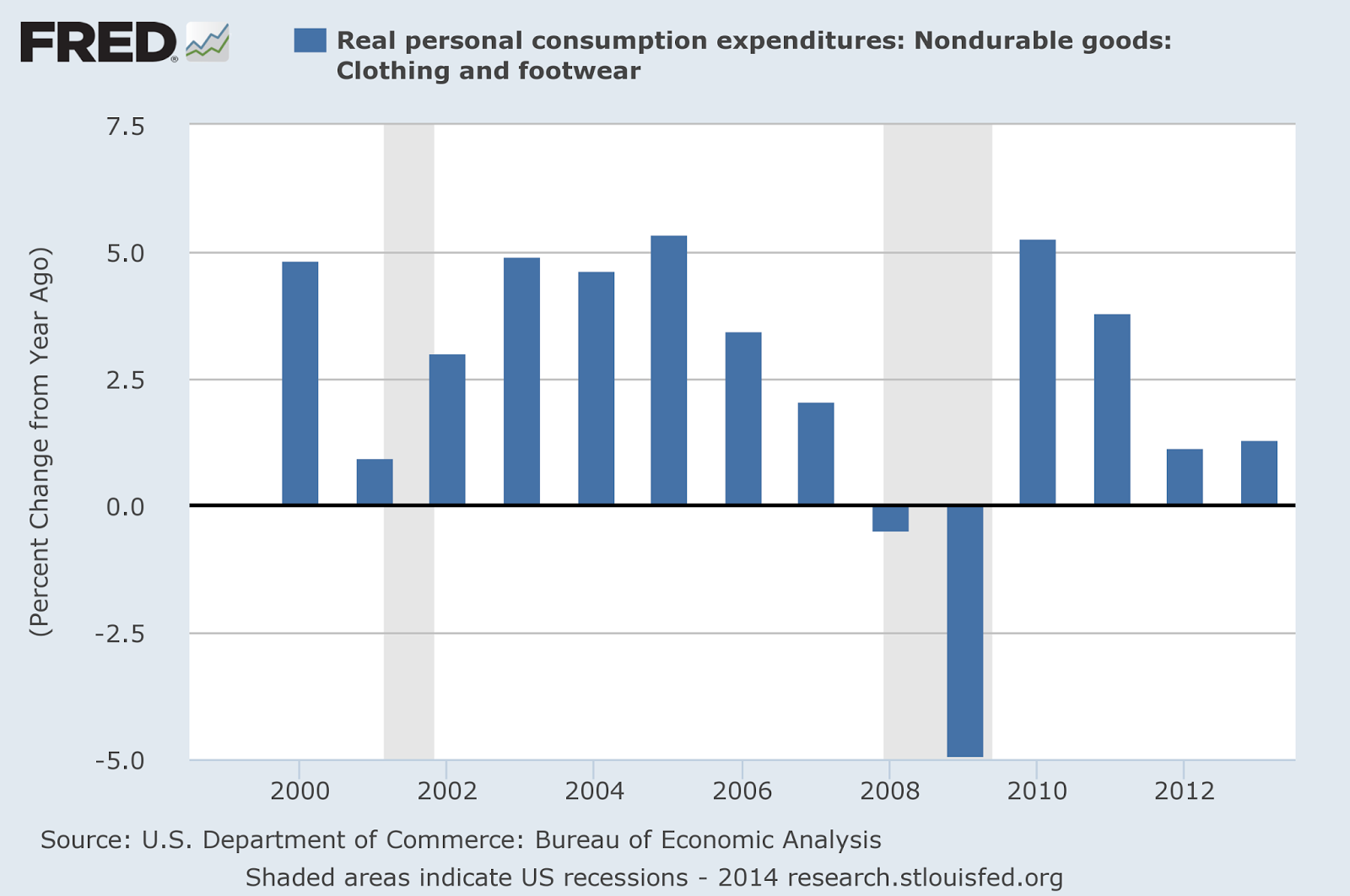 And then, like all retailers, there is the 200-pound gorilla in the room: AMAZON, which is hitting everybody in the industry hard.

The company's balance sheet is actually in OK shape.  The Current ratio has been fluctuating between 1.7 and 1.92 over the last five years.   While the quick and cash ratios are much thinner, this is to be expected from a retailer where inventory is over 80% if current assets.

The real story here is stagnating sales and lack of profitability. 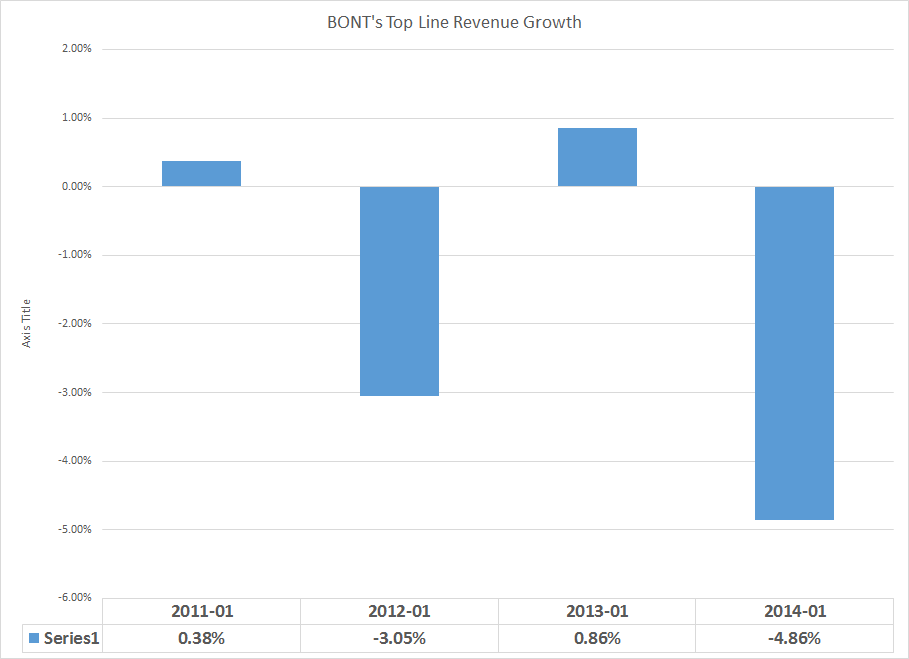 As the chart above shows, the best pace of growth over the last 4 years was .86%.  And the margins aren't much better: 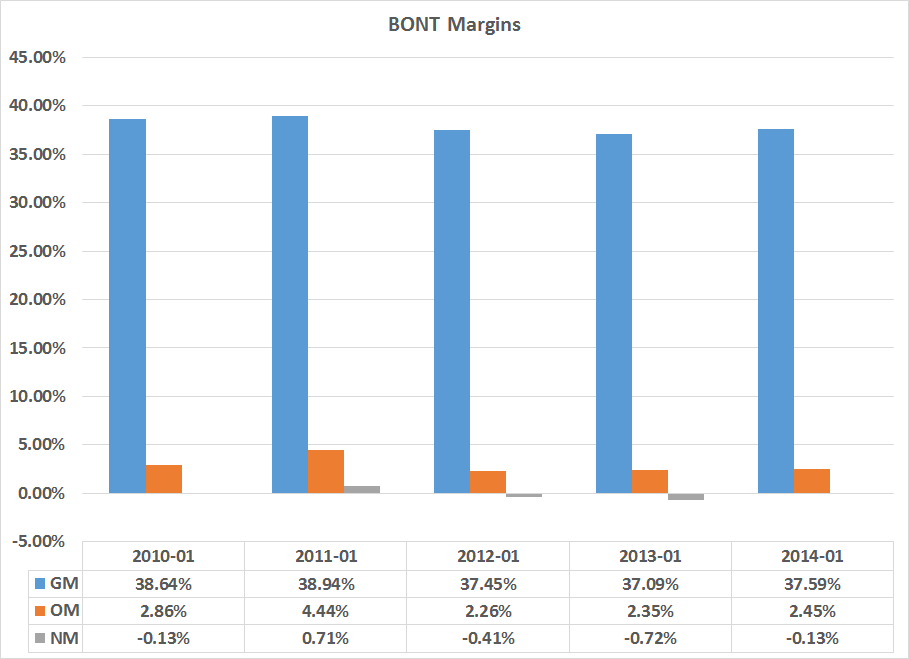 While the gross margin (in blue) has been printing at consistent levels over 35%, the best the operating margin has been over the last five years is 4.44%.  But the average margin for the same time period is 2.87% while the median is 2.45%.  Then there's the net margin level, where the best reading over the same time period is .71%.  And for the other four years, the company has lost money, which is slowly bleeding the company's cash: 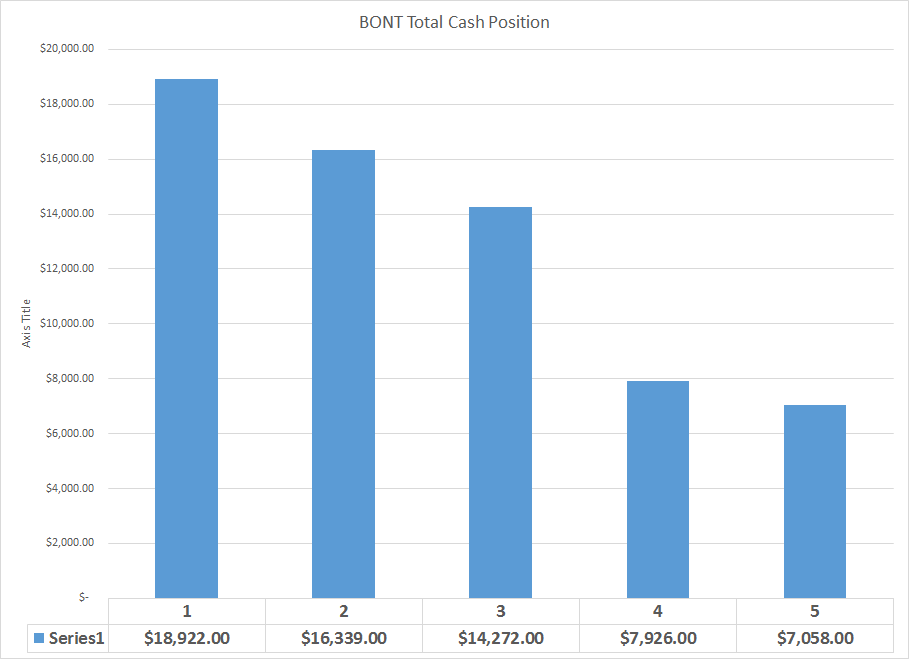 Total cash has consistently dropped from $18.9 million to $7 million over the last five years.

And finally, there is the book value situation: 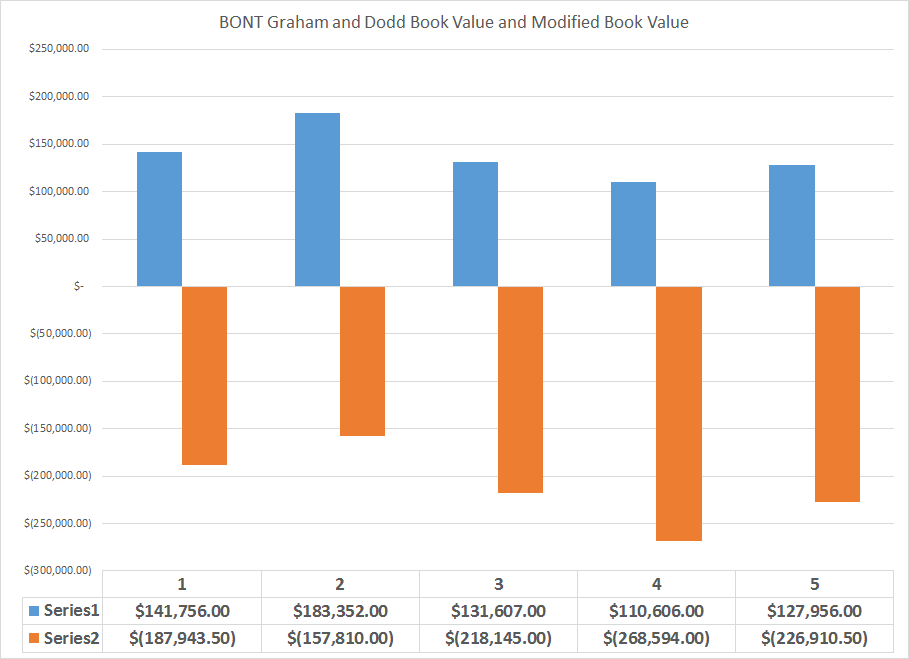 Using the standard assets-liabilities book value calculation, we see a drop from $141.7 million to $127.9 million over the last five years.  However, that calculation assumes inventory is valued at 100% -- which would never happen in the a fire sale.  So, valuing inventory at 50% (which is part of the G&D analysis) we get a negative book value.  Now, a store of this prominence would never sell for nothing.  The point, however, is this company's overall value is at best declining.

Between the intense competition in the industry, a deteriorating revenue and margin situation and the declining overall value, this stock is a sell.  A technical move below $9 would indicate the market has re-evaluated the company's overall prospects negatively, meaning it would be time to short.

The information contained herein has been obtained from sources or data that we believe to be reliable, but we do not offer any guarantees as to its accuracy or completeness. Market information is subject to change without notice and past performance is no guarantee of future results. Neither the information nor any opinion expressed constitutes a solicitation for the purchase or sale of any security or other instrument.

The Weak EU Monetary Base And Investment Situation

http://community.xe.com/forum/xe-market-analysis/weak-eu-monetary-base-and-investment-situation
Posted by Unknown at 7:57:00 AM