The regional Fed indexes, which presaged real strength in the industrial sector over the last year, are faltering (while still positive).

Meanwhile housing, as exmplified by purchase mortgage applications, refuses to be held down.
Posted by New Deal democrat at 8:06:00 AM

Do interest rates still matter for the housing market?

In the past few years, the strength of the housing market has seemed to defy the impact of interest rates.

Do they still affect housing?  I take a detailed look over at XE.com.
Posted by New Deal democrat at 7:30:00 AM 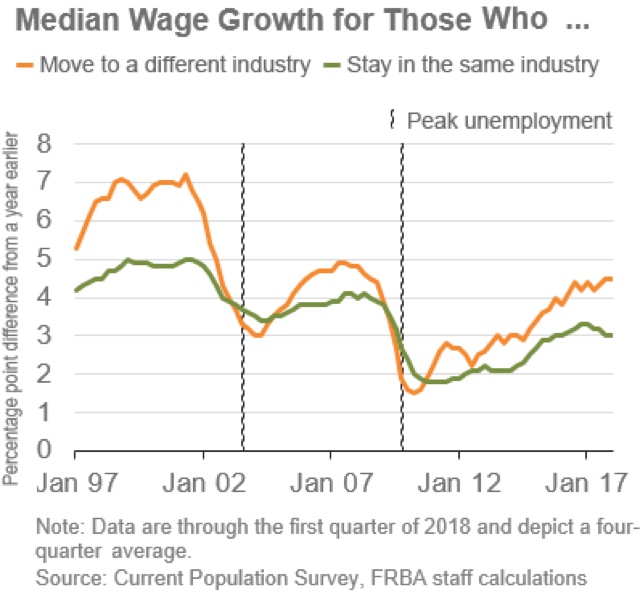 Is the US economy booming? April 2018 update

Back in January, I asked if the economy was "booming." There's no official definition, but based on my recollection of the two periods I have lived through that felt like booms, the1960s and late 1990s, I answered in the negative. I considered a number of indicators of well-being, to see what stood out in those two periods, and concluded that

the five markers of an economic Boom are the following:

In January, only the first and last markers were present. Let's update now that the first quarter iv over.

Due to the big surge of 1% in February alone, this is now over 4% YoY:

This is only a little over 2%  and has been decelerating.

Inflation was increasing in January, and has continued to increase since.

The bottom line is that, while the economy might feel like it is booming on the production side, it isn't booming at all on the worker/consumer side.

Notes on housing permits and industrial production for March 2018


First, a quick note on housing permits and starts: obviously the overall numbers were very good. The overall uptrend remains intact, and March was lower than only January for the peak of this expansion for permits. The three month average of the more volatile starts number was the highest so far during this expansion.

There is at least one issue which may indicate some stress building in the market -- or might just be noise.  Single family permits declined to the lowest level in half a year. Since multiunit housing (condos and apartments) is something of a substitute good, not infrequently that part of the market continues to rise after single family housing has peaked.

I plan on a more detailed look tomorrow. Stay tuned.

Second, industrial production was also nicely positive, although the lion's share of that was mining and utilities. Manufacturing increased only +0.1:

Still, the meme that the "hard" manufacturing numbers haven't followed the "soft" ISM and regional Fed reports (ironically now that the regional Fed numbers are softening) ought to be dead. Since production is the ultimate "nowcast" number, this argues that in Q1 the economy turned in a decent performance.
Posted by New Deal democrat at 9:21:00 AM

Real retail sales very positive. What to watch for next

This morning's retail sales report for March was certainly very positive. Nevertheless, there is one aspect of the trend which is a little concerning.

First, the obvious good news. Real retail sales were up +0.7%:

This is in line with the general upward trend. Note that I am discounting somewhat the spike last autumn that was probably related to extraordinary hurricane and wildfire repairs.

The YoY comparisons are healthy as well:

But, in line with the overarching story that we are late in the expansion, is there anything to look out for? Yes.

In general, large durable purchases wane first. So let's break out real retail sales into motor vehicles and parts (blue) vs. everything else (red), shown quarterly to reduce noise:

Real spending on vehicles declines below zero YoY well before a recession, while real spending on other things (including necessities like food) may not necessarily turn negative at all, although growth certainly declines.

Here is a close-up of the last two years:

Even with today's good reading, retail sales of motor vehicles and parts was only +0.5% YoY during the first quarter. Since part of Q4 2017's spike was related to flooding in the Houston area, the trend in growth certainly looks to be declining. Although the remaining part of retail spending looks very healthy, should motor vehicle related spending turn negative YoY, that would at least be a cautionary "yellow" flag.

A thought for Sunday: The Abyss always looks back, Presidential polling edition


A point I have made about economic forecasting a number of times is that one can be an excellent forecaster, so long as one is a bug on the wall. Once a significant number of people begin to follow *and act upon* the forecast, to that extent it must necessarily lose validity.

Take for example the yield curve, much in the news this year. So long as everyone ignores or excuses a yield curve inversion, it is an excellent indicator for the period of 12-24 months ahead. But if everyone *acted* on a yield curve inversion, by, e.g., canceling investments or increasing savings, it would turn into a botched "nowcast" instead. That which people might have started doing a year later, they would be doing now, when the conditions don't yet necessitate it.

This past week's publication of former FBI Director James Comey's book shows how the same principle applies to Presidential election polling.  Here's the passage that has been getting a lot of scrutiny:

It is entirely possible that, because I was making decisions in an environment where Hillary Clinton was sure to be the next president, my concern about making her an illegitimate president by concealing the restarted investigation bore greater weight than it would have it the election appeared closer or if Donald Trump were ahead in all polls.

Leave aside for now that it was not for Comey to decide whether or not Clinton would be "an illegitimate president" -- that's what we have criminal juries and Impeachment for --  or that he simultaneously withheld from voters that Trump's campaign was *also* under investigation at the time. The fact is that he was led by polling and poll aggregators who claimed that a Clinton victory was a near certainty to take an action that he probably would not otherwise have done.  And that action caused a near-immediate decline in Clinton's poll numbers by about 4%, while early voting was actually going on in many states. All because Comey knew that Clinton's election was "in the bag."

In a similar vein, why was Barack Obama so passive in the face of the intelligence community telling him that Russia was trying to intervene in the election by, e.g., planting "fake news" stories? He was President. He did not need Mitch McConnell's permission to address the nation in as non-partisan a fashion as possible. He didn't act because he knew that Clinton's election was "in the bag." Isn't that what Biden was sent to Europe to reassure all of our allies about?

There's also been some detailed analysis indicating that there were enough Sanders to Jill Stein voters in Michigan, Wisconsin, and Pennsylvania to swing the outcomes in those States and thereby alter the election outcome. I think it's a near certainty that these people felt comfortable casting such protest votes because they knew that Clinton's election was "in the bag."

To paraphrase the title of this post: when you look into the Future, the Future always looks back.
Posted by New Deal democrat at 7:30:00 AM