My Weekly Indicators post is up at Seeking Alpha. Conditions among the long leading indicators continue to slowly deteriorate.

As usual, clicking over and reading not only is educational as to the current and future state of the economy, but helps reward me with a few $$$ for my efforts.
Posted by New Deal democrat at 7:18:00 AM

The past few days have been spent entertaining and gorging on turkey et al., so I haven't been posting, but there wasn't much in the way of economic data, so really nothing has been missed.  I hope you, your family, and your loved ones had a happy Thanksgiving!

One item that did get reported on Wednesday worth a quick mention was the Conference Board's Index of Leading Indicators, up +0.1%.  Here's what the monthly readings look like over the last two years since the last Presidential election (h/t Briefing.com): 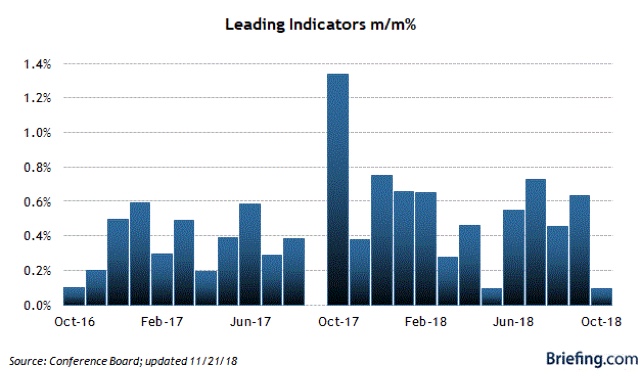 Note the huge spike in October of last year, that was just replaced YoY, and the continued readings above +0.6% through February with the exception of one month. Sine the LEI forecast about 6 to 8 months ahead, that is consistent with the strong growth we've had generally throughout this year.

While the readings are certainly still positive, they have decelerated since then, and are more on the order of what we saw earlier in 2016. In short, they're forecasting somewhat slower growth in the first half of next year. They're not quite at the point of validating - or not - my forecast of a significant slowdown about next summer.
Posted by New Deal democrat at 10:54:00 AM

This morning's report on housing permits and starts will do nothing to stop the now-received wisdom that higher interest rates, higher prices, (and the impact of the cap on the mortgage tax deduction) has caused this most important cyclical market to cool. On the other hand, they aren't evidence of any intensifying downturn.

While we wait for FRED, here's the Census Bureau's graphic representation of permits, starts, and completions: 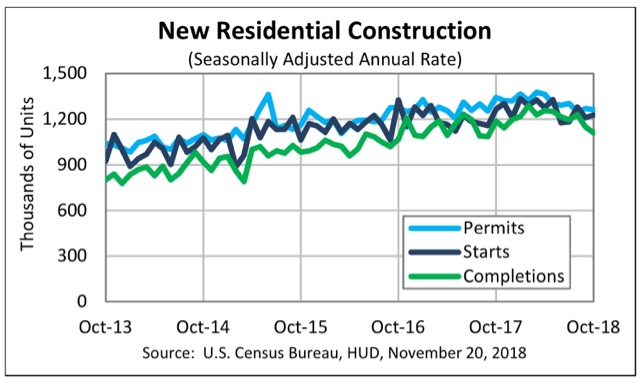 Here are the basic important numbers:
As usual, let's start with single family permits, which are the least volatile of all the leading housing indicators. These last made a new high 8 months ago, and for the first time since April 2014 they are down YoY. Before that, the last time they were down YoY was in 2011 after the expiration of the stimulus tax credit. They are also down about -4.1% from their peak. While negative, this is not a decline that is consistent with a recession.

Total permits are off -7.6% from their peak, in March .This isn't recession watch territory either.

The 3 month average of housing starts smooths out this much more volatile series. They are down -6.1% from their March peak. The single month peak, due to revisions, is now back in January.

Two months ago I wrote that the poor data had gone on long enough and was deep enough enough to turn this important long leading indicator negative. In the last two months, more data series, such as purchase mortgage applications, have also turned down. This remains true, but the *relatively* good news is that both single family permits and the three month average of housing starts have improved from their August lows of 827k and 1214k, respectively. In other words, there's been a decline from peak, but the trend - for now - is sideways since then.

Since interest rates have risen further in the last several months, I do not expect housing to improve over the next 3-6 months. To the contrary, it will probably worsen at least slightly. In short, this morning's data only reinforces my call that, absent a change of course by the Fed, housing has peaked for this cycle.
Posted by New Deal democrat at 8:10:00 AM

Good payroll reports will probably coninue until next spring


One of my continuing mantras over the years has been that spending leads hiring. It is simply demonstrable fact that, going back over 50 years, upward or downward changes in trend in consumer spending as revealed by retail sales, happen before similar changes in trend by jobs.

It turns out that there's an even close correlation when we substitute aggregate payrolls (jobs x hours x pay) for the number of jobs alone. Here's what that looks like over the past 50+ years. Real retail sales are in red, real aggregate payrolls in blue, YoY, and averaged quarterly to cut down on noise:

The only exceptions to the rule are the two oil shocks in the 1970s, the Fed-induced recession immediately thereafter in 1981, and the laste 1990s tech boom. Even in two of cases, there is a very slight lead time when we look monthly:

So now let's zoom in on the last 5 years, measured monthly:

The surge in retail spending that started at the time of the hurricanes last year and lasted through this past spring has not completely worked its way through the system. Thus I anticipate that total payrolls in real terms will continue to increase at a good clip for the next several months at least. If I am right that the last couple of months show the beginning of a slowdown in sales, that should become apparent in payrolls by about next spring.
Posted by New Deal democrat at 8:01:00 AM