The disastrous German Emperor who was a doppelganger to Donald Trump: Kaiser Wilhelm

You know the drill. It's Sunday, so I write about whatever else is on my mind.


I am presently reading Miranda Carter's "George, Nicholas, and Wilhelm," her 2009 biography of the three grandchildren of Queen Victoria who were respectively, the King of England, Tsar of Russia, and Kaiser of Germany at the time of the outbreak of World War 1.

I was gobsmacked by her portrait of of Kaiser Wilhelm's character, for it is a virtually identical doppelganger to that of Donald Trump.

The best way to show that is via a few excerpts, presented with no embellishment.

First, a look at his "stable genius":

"[Wilhelm] liked to think of himself as another Frederick the Great: politician, soldier, strategist, philosopher, cultural arbiter .... [But s]ome of those who had known him as a prince, however, worried a little about what kind of king he would make.... "He thinks he understands _everything_, even shipbuilding." Bismarck [ ] muttered about Wilhelm's inflated opinion of his own abilities ... and his minuscule attention span: he would "take a little peek ... learn nothing thoroughly and end up believing he knew everything." "

"Wilhelm considered himself an expert on many things and was not shy about saying so. In later years, he would personally inform the Norwegian composer Edward Grieg that he was conducting Peer Gynt all wrong; tell Richard Strauss that modern composition was "detestable" and he was "one of the worst"; and, against the wishes of its judges, withdraw the Schiller Prize from the Nobel Prize-winning German dramatist Gerhart Hauptmann, whose downbeat Ibsen-esque social realism he didn't like.

"[After, In 1889 in an attempt to smooth over some family difficulties, Queen Victoria had awarded Wilhelm an honorary admiralty of the Royal Navy,] Wilhelm fell upon his new title as if nothing had ever given him so much pleasure in his whole life..... Even Phillip zu Eulenburg noted disappointedly that he was "like a child over it [the British naval uniform]." Wilhelm told Herbert von Bismarck that his British naval title meant that "he would have the right as admiral of the Fleet, to have a say in English naval affairs and to give the Queen his expert advice... [He] was perfectly serious in what he said."
"...[Later that year,] Wilhelm put on his admiral's uniform, flew the pennant of a British navy admiral, and invited himself -- as a real admiral would -- to inspect the British squadron anchored [off the Greek coast].... In December, he sent [Victoria] a plan for the reorganization of the Royal Navy.... In 1891 he sent more "humble suggestions...." "

On his complete inability to maintain atttention, and wild vacillations:

"Wilhelm appeared unable to distinguish the trivial from the important -- he'd spend hours looking at photographs of warships or moving the position of the smoke stacks on a new cruiser, rather than read government reports.... Worse, he was an appalling vacillator, changing his mind -- he was often influenced by the last person he'd talked to, and constantly in quest of popularity -- with such frequency that it drove his ministers mad and made the government look irresolute and confused. Chancellor Captivi  ... observed wearily that "he often contradicted his official announcements and misunderstandings arose in consequence." His  colleague Marschall, the foreign minister, was more forthright: "It is unendurable. Today one thing and tomorrow the next and after a few days something completely different."

"Then there was his habit of making sudden rogue interventions, getting overexcited during speeches and announcing a new law that completely contradicted agreed government policy, or writing to foreign monarchs without telling the Foreign Office, or appointing someone completely inappropriate to a government position.... He was quick to resent anyone he felt wasn't sufficiently supportive."

On his existing in a completely different mental universe:

"...[T]he young kaiser [ ] showed not only an ability to flatly deny something that everyone else knew to be true, but a determination to see the world rather too much the way he wanted it to be...."

On his praeternatural ability to detect personal vulnerabilities:

"[Wilhelm] had an odd ability to home in on people's preoccupations and vulnerabilities.... There were moments when Wilhelm's probings hit a nerve ...."
(p. 151)

On his residing in a media bubble:

".... The truth was that, having laid claim to being Germany's savior and the most brilliant man in Europe, Wilhelm had proved quite unable to live up to his promise .... Although he'd told Captivi that the chancellor's job was just a temporary role until he himself was ready to take the reins of government, he had no staying power at all.  "Distractions," Waldersee had observed increasingly bitterly, " ... are everything to him ... He reads very little apart from newspaper cuttings, hardly writes anything himself ... and considers those talks best which are quickly over and done with." Wilhelm was all front. He'd filled his first years as kaiser with a round of pageants, processions, parades and elaborate memorials .... "

Carter's summary is that:

"Wilhelm manifested many symptoms of "narcissistic personality disorder": arrogance, grandiose self-importance, a mammoth sense of entitlement, fantasies about unlimited success and power; a belief in  his own uniqueness and brilliance; a need for endless admiration and reinforcement and a hatred of criticism; proneness to envy; a tendency to regard other people as purely instrumental -- in terms of what they could do for him, along with a dispiriting lack of empathy."

That the personalities of Kaiser Wilhelm and Donald Trump are so nearly identical is shocking.

As it turns out, moreover, I'm not the only one who has noticed this identity.
In March of last year, David E. Banks wrote in The Independent the two's similarities. Last October, the magazine Foreign Policy noted that "The Donald Trump - Kaiser Wilhelm Parallels are Getting Scary."  Also last October, the Irish Times published .the following:

One of the foremost historians on the first World War war has compared US President Donald Trump to Kaiser Wilhelm II.

Professor Margaret MacMillan, the author of the bestselling book The War That Ended Peace, said Mr Trump shares many of the character traits of the Kaiser who led Germany into the first World War.

She describe those traits as giving the impression of being “reckless, inconsistent  and belligerent”

Trump, rather like Kaiser Wilhelm II of Germany, is vain and has to be the centre of  atte ntion. They both admire the military tremendously. There are a lot of parallels.

And finally, just this past week, Miranda Carter herself, excerpting some of the same quotes from her book that I have above, wrote in the New Yorker  "What Happens when a Bad-Tempered Distractible Doofus runs an Empire?"

Perhaps the two most depressing takeaways from these comparisons is how Carter notes that other countries found it very easy to manipulate the Kaiser to their own advantage; and Prof. MacMillan's opinion that “He has done something to the US which will take a long time, if ever, to recover from.”

It would all be just rueful cynicism if Kaiser Wilhelm's bombastic aggressive narcissism hadn't been so pivotal to the miscalculations which exploded into World War.

Weekly Indicators for June 4 - 8 at XE.com

While there were no big changes, the overall theme of slow deceleration continues.
Posted by New Deal democrat at 8:27:00 AM

I take a more in-depth look at the provision of credit over at XE.com.

While credit is plentiful for producers, the situation looks tighter for consumers.
Posted by New Deal democrat at 8:50:00 AM

I'm still traveling, so this will be a quick update.

In re yesterday's JOLTS report, the main take seems to be that job openings were higher than the total number of unemployed, so presumably they could all be hired and we'd have actual full employment next month, right?

I don't think so. Month after month, hires have totaled considerably fewer than openings for several years. If full employment were so close, why wouldn't hires be catching up?  And every month, there are new layoffs, quits, and other separations, all of whom (except for those who retire) are available to fill those job openings.

In any event, let me focus on the simple metric of "hiring leads firing." Here's the long term relationship since 2000, quarterly through the end of March:

No sign yet of either turning down, although both may be plateauing.

In the 2000s business cycle, hires YoY turned down well in advance of the recession. That isn't the case now:

so there's no danger sign of any oncoming economic downturn in this month's report.

Here is a close-up of the last several years, monthly, of hiring vs. separations:

The YoY comparisons will get more challenging starting next month, as hires have been within a 2% range since last May, and have not made a new high since last October.

Since we are late in the cycle, my anticipation is that we will indeed see negative YoY readings on hiring at some point in the second half of this year, but we'll see.
Posted by New Deal democrat at 9:14:00 AM 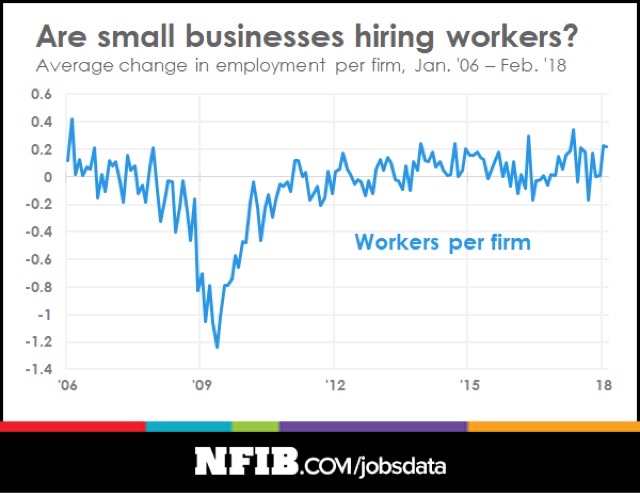 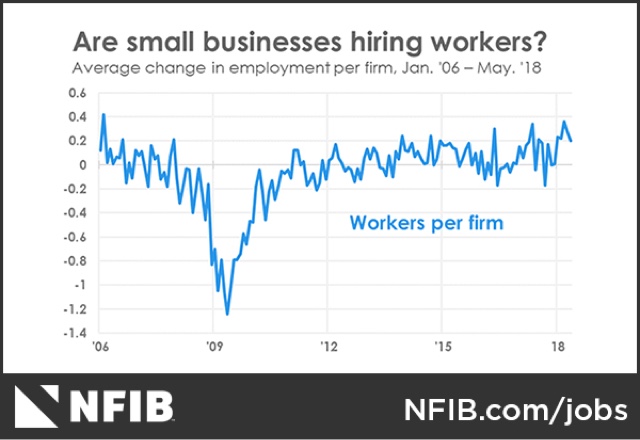 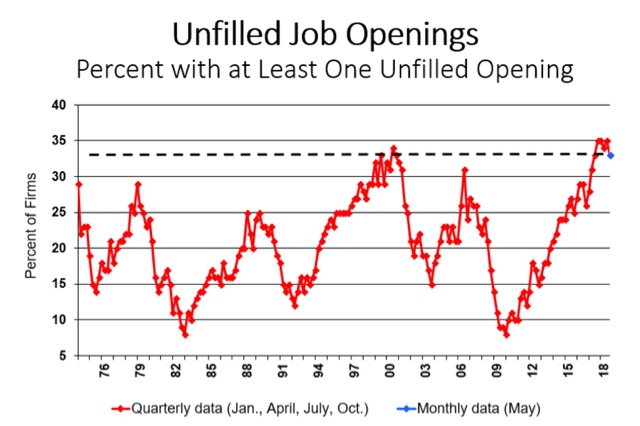 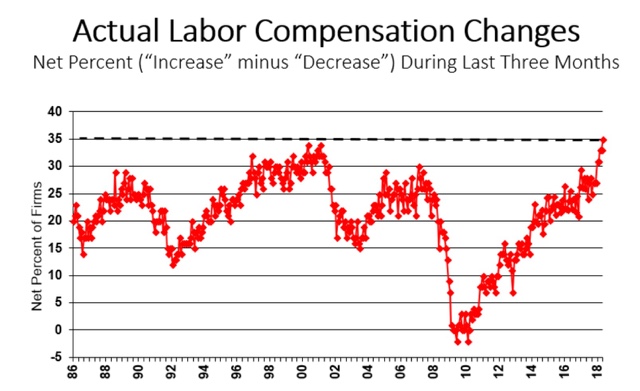