Weekly Indicators for October 10 - 14 at XE.com

My Weekly Indicator post is up at XE.com.  Between energy, commodities, the US$, and mortgage applications, there has been a slight but noticeable darkening of the picture.
Posted by New Deal democrat at 8:23:00 AM

September retail sales: positive with one fly in the ointment

As you all probably already know, real retail sales is one of my favorite metrics.  I haven't looked at it in a little while, so this morning's report is a good opportunity to catch up.

Further, sales lead jobs.  The direction of the YoY rate of change in retail sales tends to lead YoY payroll growth by 6 - 12 months.  Here are the last 10 years ending August:

This argues that YoY job growth is likely to be stable to slightly decelerating in the next few months, a somewhat contrary signal to that given by the Labor Market Conditions Index released several days ago.

Finally, the one fly in the ointment is that, between anticipated inflation in September, plus normal population growth of about .075% per month, it is unlikely that real retail sales per capita will be better than flat compared with June and July:

Real retail sales per capita is a long leading indicator, and this suggests it will have made no improvement over the last 4 months.
Posted by New Deal democrat at 9:28:00 AM

I continue to be unimpressed with the Job Openings and Labor Turnover Survey (JOLTS), as showing post-mid cycle deceleration for over a year.   I have found what I hope is a better way to present my argument, so that you can see why the report is less than heartening.

First, here is a comparison of job openings (blue), hires (red), and quits (green, right scale).  Because there is only one compete past business cycle for comparison, lots of caution is required. But in that cycle, hires and quits peaked first, while openings continued to rise before turning down in the months just prior to the onset of the Great Recession:

To better show you my concern, let's look at this same data as expressed in YoY% changes:

Although there's lots of noise in the squiggles, the pattern of maximum growth at mid cycle gradually declining under zero prior to the onset of the 2008 recession is evident.  Here is a close-up of the years 2005-08 to show you the deceleration of quits and hires from their peaks in late 2005, and the flatness of hires before declining in the months just before the recession:

Now let's look at the same time frame up until this month's release:

You can see similar peaks of quits and hires in late 2014, and the general flatness in hires over the last year. The rates of YoY change are equivalent to those at the end of 2006.

If the same pattern as the last economic cycle were to hold for this one, JOLTS would show continued deceleration before rolling over into an actual recession about 12 months from now.

Meanwhile the LMCI has been slightly negative virtually all this year.  As shown in the graph below, this is consistent with slowdowns (as in 1985 and 1995) as well as prior to recessions:

Still, the LMCI has not declined nearly as much as it typically has prior to most of the recessions in the last 50 years.  At the same time, note that the LMCI does a pretty good job forecasting the direction of the YoY change in employment (red).  So the YoY trend in the monthly jobs report is likely to continue to decelerate.

While I'm not forecasting any actual negative monthly job reports in the near future, the YoY payrolls graph still shows continued deceleration. Here is a bar graph of the monthly gain in jobs for the last 3 years, minus 150,000, better to show the deceleration from the peak of nearly 2 years ago:

The 4th quarter of last year showed job increases of over 250,000 per month.  It is a virtual certainty that the job reports for this quarter are going to average much less.

In summary, both the LMCI and the JOLTS reports have been adding to the accumulating evidence that we are getting late in the expansion, if we only go by these two metrics, and we follow the 2001-07 template, a recession could begin within about 12 months.  Which means that this month's housing data, as well as the long leading business profit and residential investment data in the first Q3 GDP estimate will take on added importance.
Posted by New Deal democrat at 11:10:00 AM

Does the recent stagnation in the unemployment rate mean we're DOOOMED?

The unemployment rate has varied between 4.7% and 5.1% over the last 12 months.  Does that mean a recession is near, or even already here?  I examine this at XE.com. 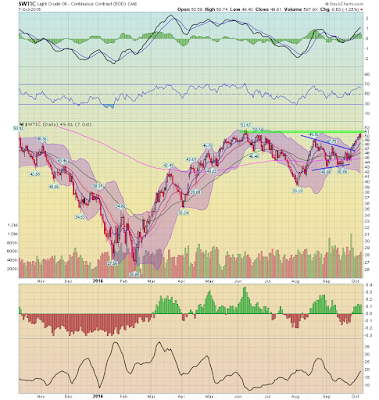 Is Rallying the Energy Sector 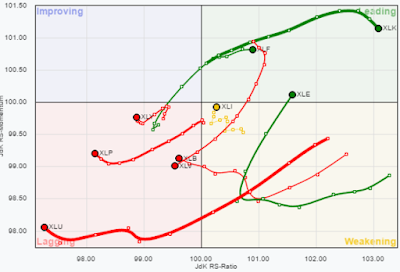 Here's the Valuation of the 10 Largest Holdings of the XLEs

And a 1-Year Chart Of All the Members


At the beginning of this year, I identified graphs of 5 aspects of the economy that most bore watching.  Now that we are 3/4's through the year, let's take a look at each of them.

The Fed attempted to embark on a tightening regimen last December.  The question became, would the yield curve compress or, worse, invert, an inversion being a nearly infallible sign of a recession to come in about 12 months.  It turned out that the weakness in the world economy plus Brexit caused a moderate compression just at the long end:

After the June Brexit vote, the 10 year treasury fell to all time lows (typically long rates only start to fall once the tightening cycle has caused the economy to weaken). Indeed, weakness in the economy has put the Fed back on hold all this year.   The bottom line is that the yield curve is still quite positive when seen in a historical perspective.

An elevated ratio of business inventories to sales means that businesses are overstocked.  This has frequently but not always been associated with a recession.  I have been using the wholesalers invenotry to sales ratio, since it has fewer secular issues.  This ratio increased has fallen significantly  since its high in January:

The good new is that  this kind of fall  tends to happen as a recession ends.  the bad news is that it hasn' fallen more, telling us that the inducstrial economy is still weak.

While 2015 saw a big improvement in involuntary part time employment, this trend has completely stalled in the last 12 months:

We are still at least 1,500,000 above a "good" number.  Worse, this kind of stall is something that we see as a cycle is approaching its peak.

The single worst part of this economic expansion has been its pathetic record for wage increases. Nominal YoY wage increases for nonsupervisory workers were generally about 4% in the 1990s, and even in the latter part of the early 2000s expansion.  In this expansion, however, until recently nominal increases  averaged a pitiful 2%, meaning that even a mild uptick in inflation is enough to cause a real decrease in middle and working class purchasing power.
There is increasing consensus that the primary reason for this miserable situation has been the persistent huge percentage of those who are either unemployed or underemployed, such as involuntary part time workers.

This expanded "U6" unemployment rate ( minus 10%)  is shown in blue in the graph below, toether with YoY nominal wage growth (minus 2%):

In the 1990s and 2000s, once the U6 underemployment rate fell under 10%, nominal wage growth started to accelerate.  U6 has been under 10% for close to a year,, and there has been some mild improvement off the bottom.  More than anything, the US needs real wage growth for labor, and the present nominal reading of  2.6% still isn't nearly good enough.  With the expansion in deceleration mode well past mid-cycle, it is not clear at all how much further improvement we are going to get before the next recession hits.