The long leading forecast continues to hover just above neutral, but the overall theme is one of slow deterioration.
Posted by New Deal democrat at 8:39:00 AM 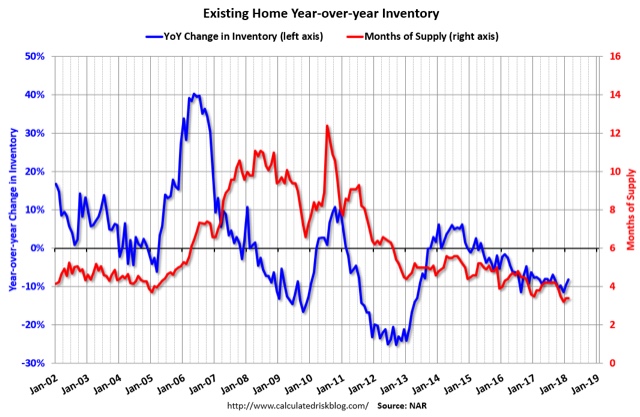 A rare event has happened in the bond markets

There has been an inversion in the *direction* in which yields in long vs. short term bonds are moving.

About a year ago I wrote a series of posts on various reasons for the relatively low labor force participation by prime age individuals, and its effect on wages; In my post summing up that study I wrote:

A major element of the participation rate is comparison with other alternatives to being in the labor force.

Two alternatives to labor participation appear to have had a significant effect on the rate.

First, the cost of child care, which has soared over the last 15 years, compared with subdued (or paltry) wage growth has caused many women and some men as well in the prime age demographic to leave the labor force completely and instead raise their children as homemakers.

A second alternative, which appears to be a major determinant of the decline in male participation at least over the last 60 years is the expansion of disability insurance. This increase in disability has been mainly due to neck and back conditions, and together with improved longevity, has increased the incidence of long-term disability dramatically.

It has also been suggested that the huge increase in the incarceration rate from roughly 1980 through 2000 has also played an important role in depressing participation.

I bring this up again because a few days ago the NY Times published a very interesting graph depicting the trends in the percentage of prime age individuals who report that they are not in the labor force due to homemaking, disability, discouragement, being in school, and "other," which presumably includes incarceration: 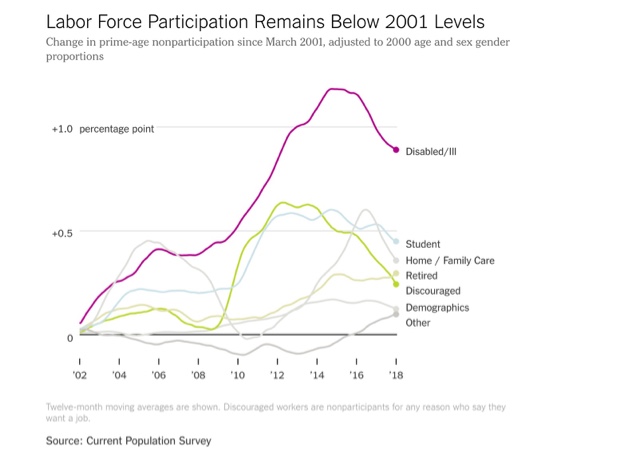 Further, one important reason for the decline in disability is simply that the large Boomer generation is aging out: in 21 months the last Boomer will have turned 55. This will mean that the younger half of the prime age demographic, roughly, will be the even larger Millennial contingent, while the presumably less healthy older half will roughly consist of the "baby bust," a/k/a Gen Xers, a point referenced by the Times:

The data shows that the decline has come almost entirely from the older half of the prime age population.

Last Friday's JOLTS report for January included some important revisions, particularly with regard to hiring.  So let's take a closer look.

I pay little attention to "job openings," which can simply reflect that companies trolling for resumes, or looking for the perfect, cheap candidate, and concentrate on the hard data of hiring, firing, quits and layoffs.

The first important relationship in the data is that historically, hiring leads firing.  While the one big shortcoming of this report is that it has only covered one full business cycle, during that time hires have peaked and troughed before separations.

And here, there has been an important revision.  Here is the historical relationship on a quarterly basis between hiring (red) and total separations (blue) as it existed through the end of the third quarter of 2017:

Note that hiring had just gotten around to equalling its peak from late 2015.

Now here is the same data, with revisions, through the fourth quarter of 2017:

Our update graph shows hiring exceeding its prior peak in the third quarter and clearly establishing a new high in Q4 2017.  That is unequivocal good news, since in the last expansion, hiring was the first metric to peak.

Here is the monthly breakdown over the last 2 years:

The positive trend in both hiring and total separations is clear.

With hiring increasing in the past few months, I expected the number of voluntary quits to improve as well, and they have:again, if the pattern from the last decade holds, I would expect quits to  improve somewhat as well.  As in the last business cycle, quits are still rising. The only divergence is that  involuntary separations remain off their bottom.

So while I continue to watch to see if hiring stagnates,the new highs in hiring are a very positive sign, consistent (though not necessarily) even with being before mid-cycle.
Posted by New Deal democrat at 8:32:00 AM

A thought for Sunday: in which I pour some cold water on 2018 midterm overoptimism


In the wake of Conor Lamb's election victory in Pennsylvania last Tuesday night, some Democratic partisans are suggesting that every GOP-held seat from a district that is less than trump +20% is in play.
Hold your horses. The results of last June's special election in Georgia, in which GOPer Karen Handel defeated Democrat Jon Ossoff show that there is a roadmap to the GOP minimizing their losses in this November's midterms.

Because while all of the legislative elections in 2017 and so far in 2018 have featured huge gains in Democratic turnout, the difference in Georgia was that there was a *similar* spike in GOP turnout.  And this playbook is going to be easier for the GOP to run in nationwide contests than in local special elections.

Let's start with turnout in Pennsylvania last week. Here's the graph on point:

Democratic turnout in the PA special election approached that of Presidential election levels, while GOP turnout was much smaller. Simple point: when D's turn out, and R's don't, D's win. 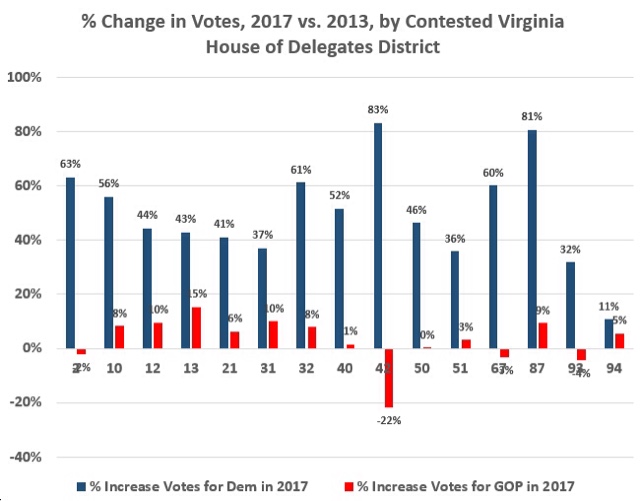 What is noteworthy in this graph, and a point that was made at the time, is that it wasn't only Democratic turnout that exceeded the levels of the last state election. GOP turnout was *also* higher, although not by nearly so much. Even so, that slight increase in GOP turnout was enough for them to hold on to the Virginia House of Delegates (literally, by one vote!) even though more votes were cast statewide for Democratic candidates, by a margin of 54%-46%.

Finally, let's turn to the Georgia election from last June.  Here is the similar graph: 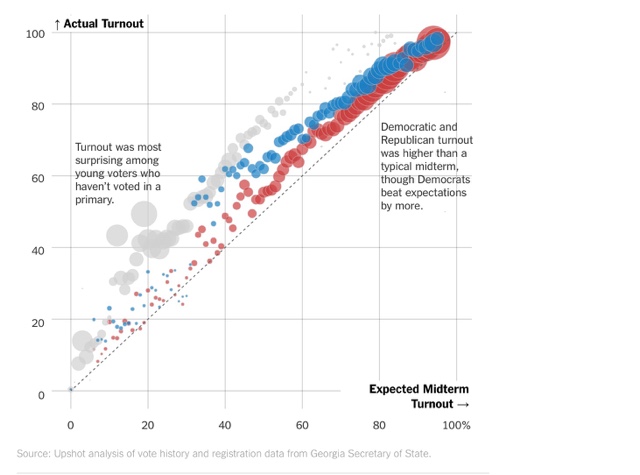 While there was sky-high Democratic turnout, turnout by GOPers was almost as high -- enough so that their candidate prevailed.  In other words, when both D's and R's turn out at near-Presidential levels, the outcome resembles that of the district's vote in the last Presidential election.  That's the point made in this analysis by Politico:

Pollsters say sky-high turnout drove Handel, the GOP nominee, to a nearly 4-point victory on Tuesday, despite most pre-election surveys showing Ossoff with a small-but-shrinking lead.

... [I[t wasn’t because Democratic voters didn’t show up. More than 259,000 votes have been tallied as of Wednesday afternoon, considerably more than the 193,000 votes in the first round of voting in  April.

In fact, turnout was much higher than for other off-year special elections in recent history....

John Anzalone, Ossoff’s pollster, said the Democrat’s campaign succeeded in turning out its voters — but they were swamped by Republicans who came out in numbers that ended up dwarfing previous high-profile special elections ....
....
“When turnout starts going up that high, and people start coming out of the woodwork to vote,” Cahaly said, “it moves back to the [natural] alignment of the district.”
Cahaly added that, in his view, Handel and Republican outside groups also drove turnout by nationalizing the race.

In November, it is going to be much easier for the GOP and their propaganda organs like Fox to "nationalize" local elections, arguing that a Democratic House is likely to impeach Trump (true) and veto new regulations on, e.g., Muslim and Latino immigratiion proposed by Trump's bureaucracy (true), while a Democratic Senate will refuse to confirm Trump's anti-gay and anti-abortion Judicial nominations, including any vacancies that may open up on the Supreme Court (also true).

At the same time, they probably will use social media accounts to try to drive down Latino turnout by arguing that the Congressional Democrats sold out Dreamers (as to which there is at least some merit).

If so, the vote in Congressional districts and Senate races is likely to come closer to mirroring that from 2016.  That strategy probably concedes that GOPers will lose any Congressional districts that voted more for Hillary Clinton than Trump. But under that result -- even one in which  Democrats "win" the number of ballots nationwide by something like 53%-47% -- the GOP nevertheless retains control of the House and Senate.

While as I pointed out several weeks ago, demographics alone should make the electorate less reddish, people shouldn't get carried away with over-optimism.
Posted by New Deal democrat at 8:44:00 AM