For the first time since I started tracking this data, literally every single one of the coincident indicators is positive. We are starting to experience a boom in economic growth that I expect to continue throughout most if not all of this year.

As usual, clicking over and reading will bring you up to the virtual moment as to what is happening in the economy, and reward me with a penny or two for the time and effort I put in to creating this weekly portrait.

February personal income and spending decline: the back end of January stimulus payments

Last month I wrote that the:“report on January personal income and spending shows just how important the stimulus packages enacted by the federal government both last spring and last month have been to sustaining the economy.”The truth of that was confirmed on the back end in this morning’s report for February, in which January’s 10% increase in income was followed by a -7.1% decrease (red). January’s increase of 3.4% in spending was also partially reversed by a -1.0% decrease in February (blue):

In its release, the Census Bureau confirmed this analysis, writing:“The decrease in personal income in February was more than accounted for by a decrease in government social benefits to persons. Within government social benefits, ‘other’ social benefits, specifically the economic impact payments to households, decreased. The CRRSA Act authorized a round of direct economic impact payments that were mostly distributed in January.”The importance of the stimulus is further shown dramatically when we subtract government transfer receipts from the equation, shown in red in the graph below:

Real personal income excluding government transfer receipts *rose* slightly in February.Since this last metric is the last of the four coincident metrics to be reported for February, we can now plot the general outline of the economy through last month, including production (blue), jobs (red), real retail sales (green), and real income (purple):

Employment is down over 5% since last February, while production is down 4%. Meanwhile income is down only 2.5%, and real sales have actually increased by nearly 5%!  Most recently, in the combined two month period since December, two of the series - payrolls and real sales - have increased, while the other two - industrial production and income less government payments - have declined. Since the Big Texas Freeze impacted probably substantially impacted all of these, the underlying situation is presumably better.Government aid has kept the pandemic from turning into a true economic disaster. Going forward, I expect improvement throughout spring into summer in all of this data.

New jobless claims are likely to the most important weekly economic data for the next 3 to 6 months. They are going to tell us whether, as the number of those vaccinated continues to increase, there will be a veritable surge in renewed commercial and social activities and attendant consumer spending, leading in turn to a strong rebound in monthly employment gains.

Here is the close up since the end of July (recall that these numbers were in the range of 5 to 7 million at their worst in early April):

Because of the huge weekly swings caused by the scale of the pandemic, a few months ago I began posting the YoY% change in the numbers as well, since until now they have been much less affected by scale, so there is less noise in the numbers, and the trend can be seen more clearly:

This is probably the last time I will use this graph, as YoY comparisons will now be distorted by the lockdowns of last March and April.  Indeed, this week, all 3 metrics were down YoY.

Continuing claims, which historically lag initial claims typically by a few weeks to several months, also made new pandemic lows yet again this week. Seasonally adjusted continuing claims declined by 264,000 to 3,874,000, while the unadjusted number declined by 278,573 to 4,217,259:

Nevertheless seasonally adjusted continued claims remain at levels last seen early in  2011.
I remain bullish that the ever-increasing pool of fully vaccinated adults - 46,000,000 as of yesterday, or 18% of the adult population - together with a seasonal shift from indoor to outdoor activities, is going to continue to result in a dramatic fall in jobless claims over the next few months.
Based on the month over month decline in initial claims of roughly 15,000, a gain last seen in October, I also expect that the March jobs report will show a gain in the range of last month’s 264,000 gain, and quite possibly much better.
Posted by New Deal democrat at 8:10:00 AM

I really need to rouse myself to write a long form piece on interest rates, housing, and the economy to post over at Seeking Alpha. Ugh!

In the meantime, here are a few quick hits on some important or noteworthy new data
1. New home sales - interest rates bite, but don’t panic
New home sales are the most leading, but most noisy, of housing data. Yesterday they were reported as having declined -18.3% to 775,000 annualized, a 9 month low, and 204,000 below their July peak (blue in the graph below):
For comparison, the much less volatile single family permits declined -9.8%, and remains above every other month in the past 10 years except for December and January.
Some of this was the increase in interest rates. Some of this can be chalked up to the Big Texas Freeze.
2. Durable goods orders
Similarly, the decline in durable goods orders in Febuary. reported this morning was likely also affected by the Big Texas Freeze:

A reminder: yes, winter occurs every year, but the season is very volatile, and the big weather events of winter do not always strike in the same month each year. I am discounting this decline unless it is confirmed for March.
Further, “core” durable goods orders remain at 10 year highs excluding January, and overall durable goods orders are only behind 2 months in that period.
3. Coronavirus cases are rising sharply in several States.
As new, more infectious mutations of the virus spread, several US States have shown big increases in cases over the last month, particularly Michigan, but also including New Jersey, Connecticut, and New Hampshire (but not New York!): 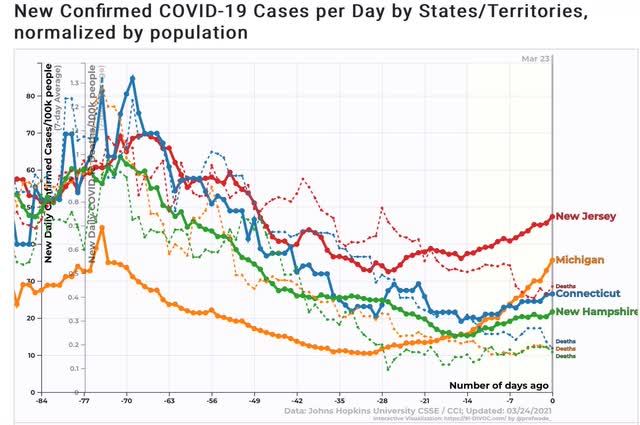 Despite this, deaths have not risen in any of them - even though 28 days has passed since the inflection point in cases. Typically deaths lag cases by about 14 days, so this is a good sign that the new cases are among younger, unvaccinated people.
4. Vaccinations are still working!
In the US, UK, and Israel, the 3 poster children for good vaccination programs, deaths from coronavirus continue to drop: 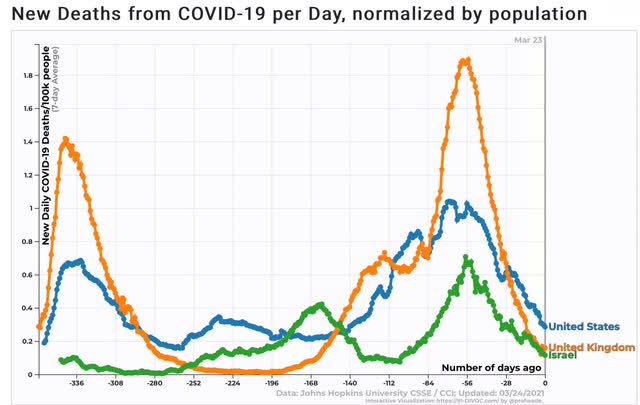 The US recorded 940 deaths on average over the past 7 days. If the rate of decline continues, in 2 weeks the US will be under 500 deaths per day for the first time in over a year.
5. And the US rate of vaccination continues to improve.
A full 25% of the entire US population has received at least one dose of vaccine, while the average daily rate of vaccination has also continued to increase: 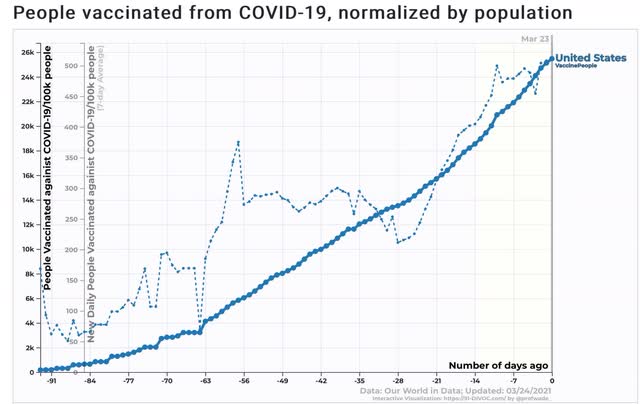 According to the CDC, 70% of all people 65 years of age and older have received at least one dose of the vaccine. It appears that, just like there are no atheists in foxholes, among senior citizens there are no - or at least very few - true “anti-vaxxers” when it come to COVID.