The short term forecast has been the most volatile portion for the past few months. And it got volatile again this week.

As usual, clicking over and reading should bring you fully up to date, and it rewards me a little for my efforts.
Posted by New Deal democrat at 8:07:00 AM

A few thoughts while you are digesting Thanksgiving dinner

There was a bunch of data released Wednesday, while yours truly was on the road along with everybody else. So here are a couple of thoughts for you as you sit there with your loosened belt figuring out what leftovers you’re going to be eating for the next few days . . .

Initial jobless claims declined back to their recent baseline last week, so the four week average declined slightly, further back into its normal range. The YoY% change averaged monthly also is lower:

And the four week average of continuing claims, while slightly higher YoY, is also well below the point where it would be a serious concern:

Bottom line: the economy is simply not going to be in recession this quarter.

Corporate profits for the third quarter were also released as part of the second estimate of Q3 GDP. Depending on whether you include inventories and capital consumption or not, they either slightly increased or decreased:

Adjusted by unit labor costs, they are either slightly (-3.3%) or significantly (-13.8%) below their peak for this expansion:

Before the last producer-led recession in 2001, both were off more than -15%:

This is a mixed signal for the economy in the second half of next year.

Just a quick note, as I am traveling today.

New home sales declined slightly in October from September, but remain at the high end of this expansion. The renewed uptrend in housing sales, due to lower mortgage rates, is clearly intact: 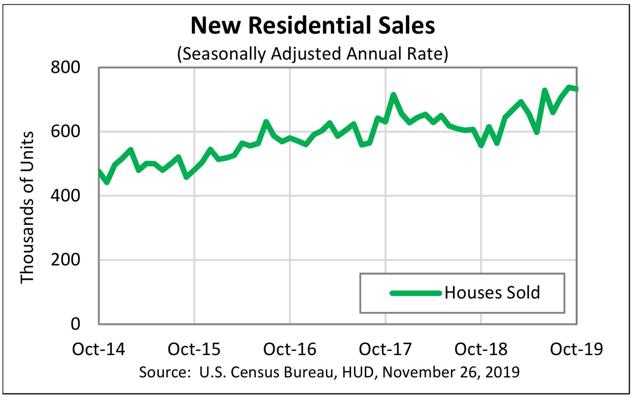 Meanwhile house prices, as measured by the Case Shiller index, also increased at a slightly faster YoY rate, 3.2% for September vs. 3.1% in August (blue):

As I have said many times, sales (permits, red in the graph above) lead prices. Now that the sales rebound is firmly intact, price appreciation has stabilized and is likely to begin accelerating again.
Posted by New Deal democrat at 9:13:00 AM

I have a new post up at Seeking Alpha.

A few months ago I took a look at the order in which I would expect the dominoes to fall if there were to be a consumer-led recession. One more domino has fallen, but several important ones are still upright.

As usual, clicking over and reading puts a couple of pennies in my pocket, and should be educational for you.
Posted by New Deal democrat at 7:42:00 AM

Live-blogging the End of the Republic

The title of this piece is increasingly my feeling about the times we are living in. Almost everywhere it has been implemented, the Madisonian system has ultimately failed, ending in presidential autocracy. All of the tools are now in place for the US to fail as well. If Trump doesn’t succeed in a second term, then the Sulla or Caesar who ends our republican experiment is alive now and has learned the necessary lessons. All that is missing is their competent and strategic implementation.
The bottom line is: provided a President has 34 Senators and a majority of the Supreme Court who will back him, he can do anything he wants. And I’m not even sure the Supreme Court majority is necessary. If Trump were to defy the Supreme Court about, e.g., his tax returns, who exactly is going to force him to obey?

I’ve made this point before, and Matt Yglesias immediately picked up on it. A couple of days ago, Chris Hayes came around to the same conclusion:

One way to understand the constitutional grant of powers to the president is that the president can do *literally* whatever he wants as long as he can hold onto the votes of 35 [sic*] senators in his party.

Meanwhile conservative columnist Rich Lowry has flat-out stated, in essence, that he would prefer a Trump who tramples on the Constitution but appoints judges who will outlaw abortion to a presidential candidate who believes in the rule of law.  Which proves, as my Sibling Unit pointed out to me, David Frum‘s point that "If conservatives become convinced that they can not win democratically, they will not abandon conservatism. The will reject democracy."

While winning in 2020 is essential, simply going back to “normal” isn’t going to do the trick. The Constitutional fabric of a President being constrained by the law has been rent. Shoring up and repairing the weak points via updating the Constitution about things like the Presidential veto, emergency powers, appointments to legislative bureaucracies, lame duck sessions of Congress, gerrymandering, and the right to vote are all necessary, even if they appear to be a superhuman lift.
In the meantime, I’ve been reading about the Republics of Venice and Genoa, and the book about the Dutch Republic is in queue. It does seem that there are some strong points of Republics that can lead them to last a very long time. I’ll update once my reading is further along. I’ve also concluded Eric Foner’s “The Second Founding,” about the post-Civil War Amendments, which not only sets forth a compelling rebuttal to the Federalist Society’s cramped and dismissive constitutional theory, but also specifically suggests a completely effective Congressional solution for gerrymandering. Finally, I’ve gone back and re-read my 2015-16 articles on forecasting the presidential election, so that I can update those for 2020. Hopefully I’ll have time to do some of this starting this week.
Posted by New Deal democrat at 8:44:00 AM