No surprise that the Fed rate hike took center stage this week.

As usual, not only is this a good up to the moment look at the economy, but clicking through and reading puts a few pennies in my pocket.
Posted by New Deal democrat at 9:12:00 AM

I pay particular attention to housing because it is ian important long leading indicator for the economy.

And more and more evidence is accumulating  -- although it is not universal -- that housing may have passed its peak in this cycle. Last year housing was resued by an autumn surge. I don't think that will happen this year, but there are conflicting signals.

My comprehensive review of that evidence is up at Seeking Alpha.

As usual, your clicking over and reading hopefully will be educational. It will also reward me, ever so slightly, for the work I do putting this stuff together.
Posted by New Deal democrat at 7:20:00 AM

This is something that I don't normally bother to cover, because it deals with existing homes, but since Bill McBride a/k/a Calculated Risk is off hiking, let's take a look.

The NAR reported this morning that pending home sales, i.e., contracts to buy existing homes, declined by 1.8% in August. This was the fourth decline in the last five months. This metric has now been negative YoY for the last eight months.

According to the NAR's spokesman, Lawrence Yun:

The greatest decline occurred in the West region where prices have shot up significantly, which clearly indicates that affordability is hindering buyers.

So far, that makes perfect sense. But then he added,

and those affordability issues come from lack of inventory, particularly in moderate price points

which is somewhat misleading. Inventory has increased YoY for the last several months, which means that if we could seasonally adjust, it would probably have bottomed earlier this year.  And yet prices have continued to rise.

Elsewhere, the report suggests that inventory will continue to rise, and that potential sellers haven't gotten the message that prices are too high, because Yun also said:

According to the third quarter Housing Opportunities and Market Experience (HOME) survey, a record high number of Americans believe now is a good time to sell. Just a couple of years ago about 55 percent of consumers indicated it was a good time to sell; that figure has climbed close to 77 percent today.

That 77% number isn't because they expect to have to sell at lower prices.

The takeaway from today's Pending Home Sales report is that the decline in existing home sales from its peak a year and a half ago is going to continue.
Posted by New Deal democrat at 11:21:00 AM 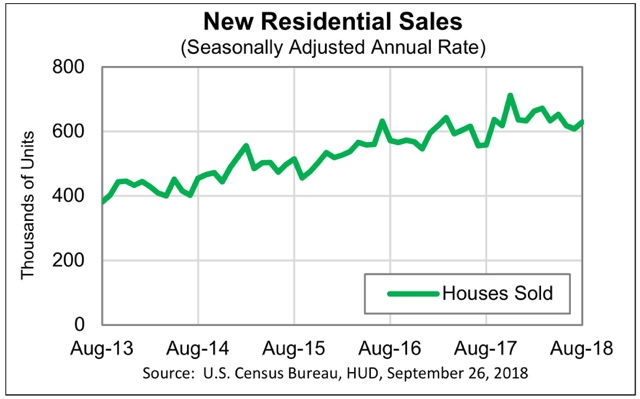 How close are we to full employment? September update


A couple of months ago, I estimated that we were about 0.8% away from "full employment." Theoretically, that should be when everyone who wants a job has one, but more realistically, the benchmark would be peak employment from the last few cycles.

We've had a couple more good employment reports since then, so where are we? In the below graphs, I'm going to compare our situation with the best situation in the last 50 years: the tech boom of 1999-2000.

First off, the primary difference between the U3 unemployment rate and the U6 underemployment rate is people who are working part time but would like a full time job.  At its best in 1999, 2.2% of the labor force were in this condition, so I've subtracted that in the graph below:

Notice that despite the big drop in the last couple of months, at the far right, we are still slightly above 2007 levels, and a little more above 1999 levels. Here is the close-up:

Currently the level of involuntary part-times is about 0.5% above its 1999 bottom.

Next, above the underemployment level are those who aren't even looking for a job, and so aren't counted in the labor force at all, but say they want a job now. This is roughly 5 million people. Even at its best level in 1999, when we include these people as well, and add them into the labor force, it totaled 9.8%, so that level is subtracted in the below graph:

Put these two together, and we can calculate that if about 750,000 involuntary part-timers were to get full time jobs, and another 1.2 million people who aren't even in the labor force got jobs now, we would equal the best level of the "enhanced underemployment rate" 1999. That's one good estimate of how close we are to "full employment."

Notice that is the same level I caluclated two months ago.that's because, despite the progress on *under*employment, there's been no progress at all on those who are not in the labor force but want a job now (in fact that number has risen slightly since March).

This 1.5% comes from the population who aren't in the labor force, and indicate that they *don't* want a job now. Mainly these people are disabled, or raising children at home, or younger people who are in school. But, especially among the first two groups, if wages were higher, some would decide it was financially advantageous to join the labor force.

As I said yesterday, the signature of our current economy is the dual extremes of very low unemployment, and very low wage growth, and I did not think that was a coincidence. If wages were higher, some of those 1.5% out of the labor force would enter it, and not all would find jobs, meaning that the unemployment rate would be higher.

The *rate* of new jobless claims, at all-time lows, forecasts even lower unemployment


It's a slow news week, so I thought I'd start out with something I haven't looked at in awhile: initial jobless claims as a share of the population and as a leading indicator for the unemployment rate.

This economic expansion has featured two contrary extremes in the labor market: low wage growth and increasingly vanishing layoffs (I don't think that's a coincidence, but that's a subject for another post!).  Let's take a look.

The first graph below is of weekly jobless claims as a share of the entire labor force. To generate this, I also take into account "covered employment." That is, not all jobs are eligible for unemployment insurance, and because of part time work and the gig economy, that share is less than it had been previously. So, first I divide the average number of jobless claims over a month by the percent of covered employment. The lower the share of covered employment, the higher the adjusted layoffs number. Then I divide that in turn by the number of people, both employed and unemployed, in the labor force.  Here's what I get, through August:

Here's a close-up of the last nine years:

Not every zig and zag is followed, but the general relationship is clear. Note that initial jobless claims have continued to make new 48 year lows this month (September).

The unemployment rate made its most recent low of 3.8% in May. Based on the relationship with initial jobless claims, we should expect it to go even lower by the end of this year.
Posted by New Deal democrat at 7:45:00 AM