This week, while the high frequency data remained fairly steady, the Fed and the monthly housing data overshadowed it.

This is a Big Deal: housing permits and starts now a long leading negative


I'll have more to say next week, but let me just drop this right now: this morning's housing report was a Big Deal. FRED doesn't have the graphs yet, but here are the numbers from the Census Bureau cite.

Graph of starts and permits: 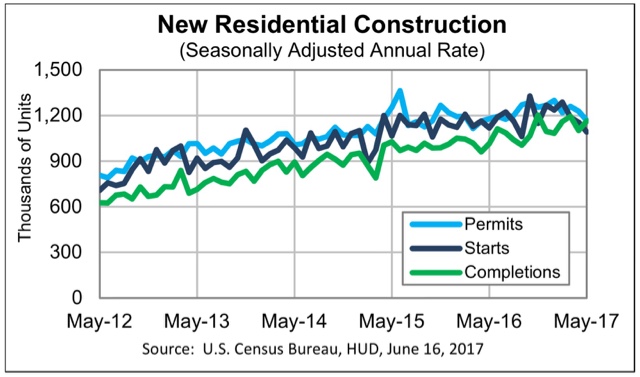 Note both have turned down significantly this year. 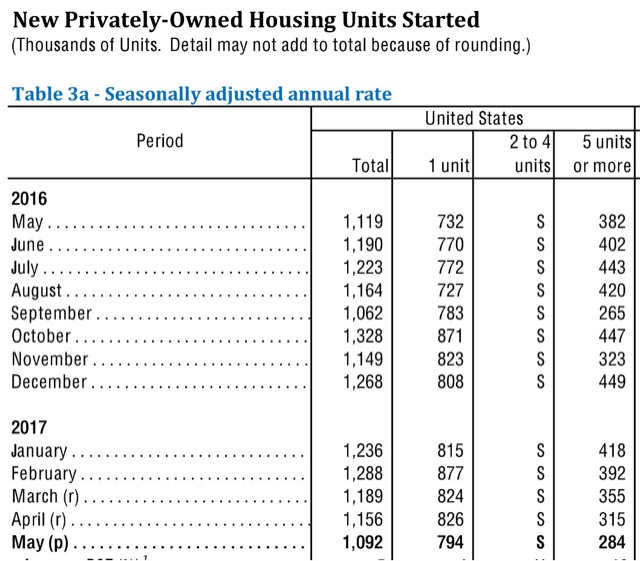 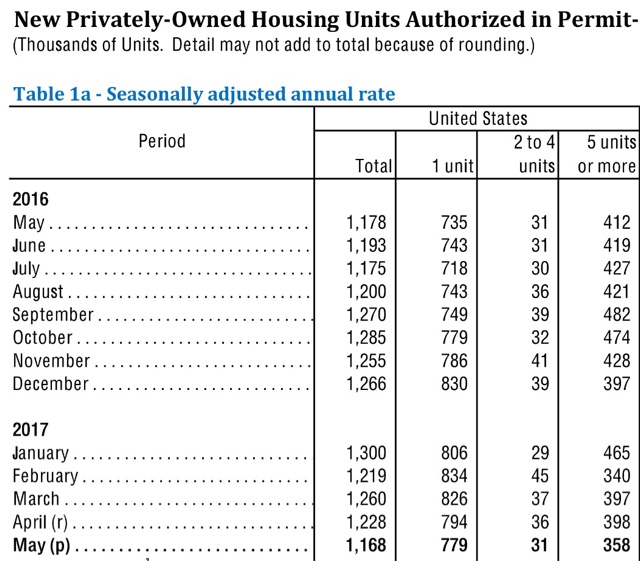 The much more stable single family permits is at the median value for the last 12 months. Total permits are at a 12 month low.

I have been expecting a slowdown, based on the jump in interest rates since the Presidential election last November. It has clearly arrived, and it is significant enough to tip my rating of the housing market as a long leading indicator all the way to negative, pending next week's report on single family home sales, which becomes all the more important. 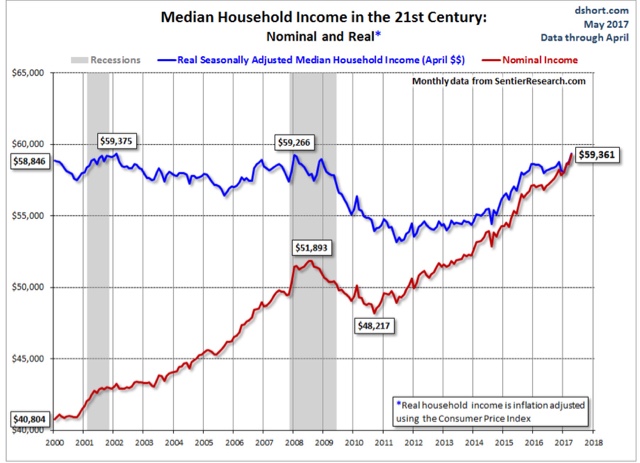 The Fed is Missing the Inflation Picture

Retail sales disappoint -- but don't hyperventilate about it

There certainly is a  lot of information to unpack from this morning's retail sales and inflation reports, and what they mean for wages and jobs.  I'll address them in separate posts.

First, retail sales.  They certainly were a disappointment, coming in at -0.3% nominally and -0.2% in real terms.  That being said, the monthly reports are somewhat noisy.   We commonly get several of these a year, as shown in this graph of the monthly change in real retail sales for the last 7 years:

There have been 9 worse monthly reports than this just over the last 3 years!

The YoY% change in real retail sales barely budged, and remains higher than for most of 2016:

So while yes it is disappointing, there's no reason to hyperventilate.

While on a monthly basis there is way too much volatility, over the longer YoY measure, real retail sales do generally lead jobs by 3-6 months (averaged quarterly to reduce noise):

Since YoY real retail sales in 2017 have been generally better than 2016, there is no reason to think that the jobs situation is going to deteriorate substantially in the next few months.

Waiting for the Fed - what happens to bond yields?

Everyone expects the Fed to hike interest rates tomorrow.  I take a look at what that might mean for the yield curve over at XE.com.
Posted by New Deal democrat at 9:47:00 AM

- by New Deal democrat
Well, this isn't something I expected to happen at the beginning of this year. For the last 16 months, gas and oil prices have risen off their bottom and the question had been, how much of a YoY increase there would be.
That has all changed in the last month.  A few weeks ago, oil prices went negative YoY.
As of this past weekend, according to GasBuddy, so did gas prices:

and gas prices at the pump tend to follow oil prices with a slight lag, it looks like consumers will benefit from cheaper gas for a little while longer.  This will tend to be reflected in subdued inflation readings, and so higher real wage gains.
All of which makes it perfectly obvious that the Fed isn't raising rates to fight inflation.