Weekly Indicators for November 20 - 24 at XE.com

How sanguine (or not) you are about longer term prospects for the economy depends on how you interpret flat long term yields vs. increasing short term yields.
Posted by New Deal democrat at 9:32:00 AM

More on housing at XE.com

I've elaborated on my dissection of October housing permits and starts over at XE.com.

Anecdotally, I know of three twenty-somethings, two of whom are single, who are blue collar workers in the construction or retail sectors, all of whom are in the process of moving out of apartments into existing homes. The story for all three is basically the same: compared with rents, the monthly payments on a house is a compelling bargain.

Whether or not the plural of anecdote is data, somehow I doubt these three people are the only ones to make that calculation -- which supports the data I published a month ago pointing out that even though house prices are very high, the monthly payment is very reasonable compared with the last 30 years, and a bargain compared with soarding rents.
Posted by New Deal democrat at 8:00:00 AM

The yield curve: we're not DOOMED yet

Here's another item to ponder while I am away this week....

An inversion in the yield curve (i.e., shorter length bonds yielding higher than longer term bonds) has (with the exception of 1966) been a reliable sign of an oncoming recession, at least since the late 1920s. Mind you, the curve did NOT invert at all during the later 1930s, 1940s, or early 1950s, despite a number of recessions, including the big 1938 recession, taking place.

But a yield curve inversion = bad, no doubt about it.

There's been a lot of chatter recently about the yield curve flattening, with a few of the usual DOOOMish suspects calling it recessionary even now.

Here's a long term look at the 10 year minus 2 year yield curve:

Note that an inversion has been a reliable signal of a recession beginning in the next 12 to 24 months.

But we're not even inverted now!

Here's a look at the yield curve for the last 5 years:

The trend from peak to peak since the beginning of 2014 has been a slow tightening on the order of 0.4% to 0.5% per year. If that general trend were to hold, we're 18 to 24 months from an inversion.

Even if we use the steeper trend decline that began from the peak last December, we're still 10-12 months from an inversion.

In short, even if the yield curve gives an accurate signal this time around, it would still mean that the expansion has a ways to go.  Sorry, but we're just not DOOOMED yet.
Posted by New Deal democrat at 8:00:00 AM

The Large Increase in the LEIs is a 1-Time Event

Yesterday, the Conference Board released their latest LEI numbers, which reported a large increase.  As the above table shows, this was mostly caused by a big contribution from initial unemployment claims.  They recently rose and fell due to hurricane season:

The top chart is the composite 4-week moving average, which spiked after the hurricanes hit the U.S.  The middle chart shows initial claims for Texas; the bottom chart shows the same data for Florida.  All three indicate that the large decline is a temporary development that will return to more normal, late cycle readings next month.

I'm away this week, so while I'm not commenting on the few bits of incoming data, here's an item to ponder.....

With respect to commodities, it is said that "the cure for high/low prices, is high/low prices."  Thus $4/gallon gas a decade ago brought forth renewed exploration, greater efficiency, and increased use of alternate fuels.

Almost two years ago gas bottomed out at about $1.65/gallon. I would expect new exploration to slow down or stall, less of a drive for efficiency and for alternate fuels.  The SUV seems to be king again, and hybrids like the Toyota Prius have not increased their market share.

So is the beginning of another secular increase in the price of gas in the works?

Here's what prices look like since the big secular low at the beginning of 1999, showing the bottom in January 2016 and a slow upward trend since:

Here's the YoY% change in prices:

Typically gas prices decline in the autumn into winter, as vehicle mileage declines -- but this autumn prices have increased.

I don't claim any special knowledge about the oil and gas industry. Still, given that the 1974, 1979, 1990, and 2008 recessions were caused in part by or at least included gas price spikes, it's something to keep an eye on.  Should gas prices continue to rise, and inflation with them, the Fed is likely to raise rates enough to invert the yield curve.

Over the last few weeks, the fixed-income world has been focusing on the junk bond sell-off.  Looking at the charts we see it's not the Armageddon event many have predicted.  Let's start with the daily chart: 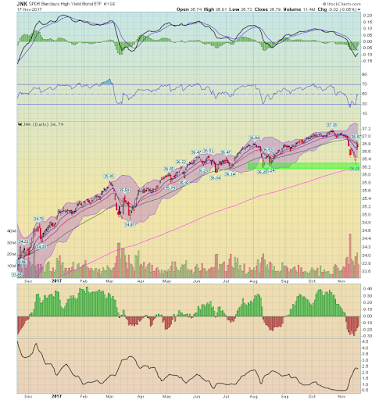 Prices dropped to ~36.25 before rebounding.  They are also slightly above the 200-day EMA.  The EMA is about to give a buy signal.

Turning to the weekly chart, we get this picture: 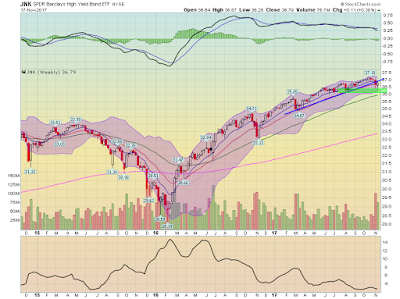 Yes, prices broke support by moving through the trend line connecting the late February and early August lows.  And the MACD has been grinding lower.  But it's been moving lower since 3Q16.  And all the shorter EMAs (10, 20 and 50 week) are all moving higher.

The JNK sell-off is timed with the debt situation in Venezuela.  But that's a very small part of the market.  However, it has taken up a great deal of the headlines, which has contributed to the sell-off.

Unless we see other bearish headlines in this space, this is really nothing to be concerned about.