My Weekly Indicators post is Up at Seeking Alpha. Yet another long leading indicator has slipped into negative territory.

As usual, clicking over and reading should help you understand the current situation in the economy, and helps me out with a little $$$ jingle for the holidays.
Posted by New Deal democrat at 7:54:00 AM

The recent rise in initial jobless claims: signal or noise?

Is it cause for concern? After all, the long leading indicators have been neutral for half a year, and in the last several weeks their more volatile high frequency version turned negative, so it is reasonable to expect short leading indicators to start to follow suit.

To cut to the chase, while it is certainly possible that it is the beginning of something worse, we aren't anywhere near the point where we can rule out it simply being noise (although it certainly suggests that the monthly unemployment rate isn't going to decline any further in the next few jobs reports, since initial claims lead the unemployment rate by several months). I've arrived at a formulation for distilling signal from noise, which will be the subject of a longer post, but consider this an introductory sketch.

While I won't go into all the details here, the simple fact is that there is almost always one or two periods a year where the four week moving average of jobless claims rises between 5% and 10%. About once every other year for the past 50+ years, it rises over 10%. Typically (not always!) it has risen by 15% or more over its low before a recession has begun. And a longer term moving average of initial claims YoY has, with one exception, turned higher before a recession has begun.

As of yesterday, the four week moving average is only 8.4% above its September low of 206,000,  so we are still well within the range of normal fluctuations during an expansion.

Another way to look at this is the quarter over quarter percent change in the average of weekly initial claims:

You can see that, even in the middle of expansions, increases of 5% are not uncommon.

Here's the close-up of this expansion:

For the first 8 weeks, this quarter is running between 4% and 5% higher than last quarter.

A second way to parse signal from noise is to look at readings YoY.  With the sole exception of 1981, when the Fed was drastically raising rates, the number has always been higher YoY by the time a recession begins:

As shown above, this is true whether we measure on a monthly (blue) or quarterly (red) average. The monthly YoY average signals first, but results in many more false positives. The 13 week moving average gives one or two months less warning, but is much less likely to give a false positive.

As of yesterday, initial claims are -7.5% lower YoY, so are nowhere near cause for concern.

I'll lay out a more detailed explanation of what it would take for me to hoist a yellow or red flag, or "neutral" or "negative" reading on initial claims, in the next week or two, but for now, suffice it to say that since I am anticipating a slowdown next year, I am not anticipating initial claims making any significant new low compared with September, but on the other hand, it would take an increase in the four week moving average to nearly 240,000 for a yellow caution flag to be triggered.
Posted by New Deal democrat at 8:06:00 AM

In October personal income increased 0.5%, and personal spending increased 0.6%. These are both very strong increases. Further, as the graph below shows, real inflation adjusted income and spending both also rose:

These are coincident indicators that form part of the quintessential nowcast. Real personal income adjusted by transfer payments and real personal spending are two of the very series the NBER looks at to determine the onset and ending of recessions.

As a result, they don't tell us anything about where we are going vs. where we've just been. Further, because these have been subject to very dramatic and very late (as in, years later) revisions, I'm putting even less stock in them. Still, I'd much rather they be strongly positive than negative, so this is evidence that the consumer economy remained strong in the first part of this quarter.
Posted by New Deal democrat at 8:18:00 AM


As you may have already read elsewhere, new home sales plunged -8.9% in October to the seasonally adjusted annual rate of 544,000. Here's the accompanying graph:

BUT ... take this with a big grain of salt. The reason I rely on building permits, espectially single family permits, is their much smaller volatility, and *much* smaller rate of revisions.

To put this in context, here's the graph from one month ago:

September new home sales were originally reported at 553,000. One month later, they've been revised upward to 597,000! That's an 8% upward revision. So, who's to say what this month's number will look like one month from now.

Nevertheless, it certainly adds yet more evidence to the case that home sales have peaked for this cycle, barring a Fed reversal.
Posted by New Deal democrat at 9:26:00 AM


Here is the raw corporate profits table released by the Bureau of Economic Analysis:

Lines #3 and #11 are the two we are interested in. Both measure corporate profits after tax, with and without inventory adjustments. The first increased quarter over quarter by +3.3%; the second by +0.7%. Note that this q/q result (as opposed to YoY) is not affected by the tax cut enacted last December.

A few weeks ago, unit labor costs were reported to have increased by +0.3% in the third quarter.

As a result, regardless of which way we measure, corporate profits increased in Q3.

Between increased corporate profits and loose lending, as reflected in the Senior Loan Officer Survey several weeks ago, the producer side of the economy continued to do very well through September.  Although several other long leading indicators, most importantly interest rates and housing turned negative by the end of September, this is enough to confirm that, left to its own devices, the economy should not roll over into recession in the first three quarters of next year.

The "left to its own devices" part in the above sentence, however, is an important qualifier right now, because it does not include the effect of Trump's tariffs. This is an ongoing and generally haphazard public policy intervention into the market, and the early results, as measured by rail traffic in particular, have been negative. It is simply impossible for me to do anything more than guess how much that might change the conclusion. At the most, I would hazard that Trump will continue to add tariffs, and that it *could* take a weak economy, such as I already foresee for next summer, and tip it into contraction.
Posted by New Deal democrat at 8:04:00 AM


Remember: home *sales* peak first; house *prices* peak later! That's because it  is reduced sales themselves that give sellers the signal to reconsider their asking prices, and buyers to consider becoming more aggressive.

This morning two important measures of house prices were released, both for September.

Second, the FHFA house price index also rose, both for the month of September and the Third Quarter as a whole:

While the YoY increases are decelerating, they are still positive. More importantly, where we have seasonally adjusted monthly data, that is the most forward-looking measure.

In short, while home *sales* by any measure peaked no later than this past March, house *prices* have been continuing to increase. Barring a sudden Fed reversal of course, so long as prices continue to increase, expect the dynamic of declining sales to also continue.

UPDATE: And, here we go. The below graph features the house price indexes (blue and green, left scale) vs. housing permits (red, right scale) since just before the peak of the housing bubble:

You can see that permits peaked first both times, and troughed first as well. With each new piece of housing data, I become increasingly confident that, barring a prompt reversal of course by the Fed, the housing market, in terms of sales, has peaked.
Posted by New Deal democrat at 8:43:00 AM

The yield curve has gotten tighter across more maturity levels. I have an update, and what this means for my forecast for weakness as next year progresses over at Seeking Alpha.

As usual, clicking over and reading hopefully informs you as well as tossing a few pennies my way.

As a bonus, the yield curve today (dark red) looks very similar to how it did in Novmeber 2005, about a month before it inverted, and two years before the last recession (light red): 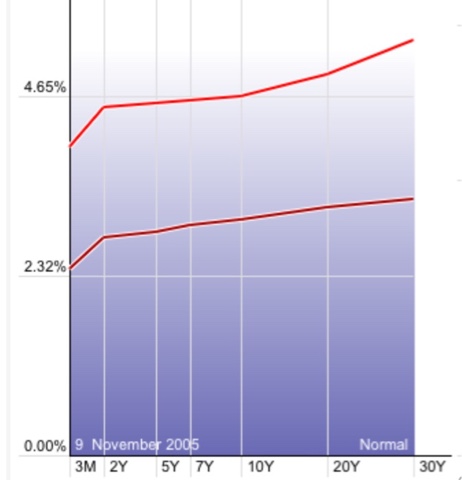 "On my wall, the colors on the maps are running"

Two years ago in a post entitled "Those who cannot see must feel", I wrote:

That's the translation of an old German saying that I used to hear from my grandmother when I misbehaved.  It is pretty clear that, over the next four years, the American public is going to do a lot of feeling ....  The results will range somewhere in between bad, disastrous, catastrophic, and cataclysmic, depending on how badly foreign affairs are bungled ....

I have some hope ... because both China and Russia are smart enough to figure out that they can get what they want by bribing Trump without resorting to armed conflict.

Although I never published it here, below is the conclusion of an email I sent to several correspondents six months ago:


Ever since Trump's election, the lyrics of Al Stewart's song about the 1937 Spanish Civil War, "On the Border," have been going through my mind:

and I have thought that 2019 is the time of maximum peril to Taiwan and Ukraine.

The midterms were less than three weeks ago. Today Russia blocked the Kerch Strait, entrance to the Sea of Azov, effectively cutting off one of Ukraine's ports. Ukraine says its navy is leaving port.

Between now and the end of 2019 is the most dangerous time, because any potential U.S. Foe will want to have any aggressive move be a fair accompli by the time the 2020 U.S. Elections are underway, let alone by the time a replacement for Trump can be inaugurated.

Good luck to us all.