Weekly Indicators for December 8 - 12 at XE.com

There is a stark contrast between the more internationally-influenced data vs. US domestic data.
Posted by New Deal democrat at 8:00:00 AM

I have a post up at XE.com about the great November retail sales report this morning.

A few Doomers have actually predicted poor Christmas sales.  Not gonna happen.
Posted by New Deal democrat at 9:12:00 AM

By way of background, John Hinderaker of the Power Line blog was one of the many conservatives who argued that QE and government stimulus would lead to massive inflation and a spike in interest rates.  Obviously, neither happened.  Bloomberg analyzed the potential investment ramifications of this failed thinking and determined that, if you had taken this advice, you would have lost $1 trillion dollars.  Put in less formal terms, we know that Mr. Hinderaker's economic analysis would have lost you serious money.  Of course, that has not stopped him from continuing to write about economics in the ensuing years.  (Gee, I wonder is he's invested in stocks .... )

Which leads to this observation.  Mr. Hinderaker once made the following public statement about President Bush:

It must be very strange to be President Bush. A man of extraordinary vision and brilliance approaching to genius, he can’t get anyone to notice. He is like a great painter or musician who is ahead of his time, and who unveils one masterpiece after another to a reception that, when not bored, is hostile.

He later attempted to walk the above statement back, but it's most likely this was done because of the large amount of ridicule directed at him for that statement.

However, let's assume for the sake of argument that Bush is a genius and compare the total establishment jobs performance under Bush and Obama: 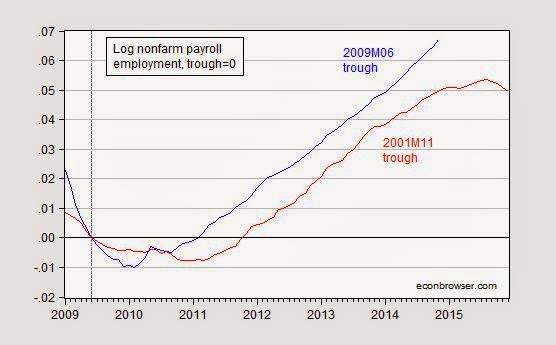 So, if Bush is a genius, and his establishment jobs performance was worse than Obama's doesn't that make Obama ... a super-genius?