Weekly Indicators for February 2 - 6 at XE.com

Low gas prices and low interest rates, and their effect on housing, are still the big story.
Posted by New Deal democrat at 8:32:00 AM

US Equity Market Review For the Week of February 2-6; Minor Upside Breakout Edition


The market is still facing incredibly strong headwinds coming from several different directions, starting with a strong dollar.  Depending on you source, S&P 500 companies get between 40%-55% of their earnings from overseas trade.  Even at the low end of the exposure spectrum, (40%), we’ve still got some pretty major headwinds on the currency front.  And, on that topic, international markets are weak; Japan is coming out of a technical recession, Australia has some underlying issues, Canada has to deal with weak oil prices, China is clearly slowing and the EU is limping along.  Tying these two elements together, profits from weaker overseas economies have to be converted into a strengthening currency, creating a negative double-whammy.  And then there is the negative impact of oil, as that is destroying the earnings of an entire economic sector.  The sum total of these events is to put a tremendous amount of downward pressure on the markets.
But, as was shown last week, the US economy is in good shape, providing a solid backdrop for continued earnings growth.  Last week, that was strong enough to overcome bearish sentiment.  But in this environment, it's certainly no guarantee that we'll see continued upward price movement.


Two economies – Australia and Canada – have recently seen a drop in rates, caused by an overall weakness in their respective economies.  Neither are heading toward a recession, but both are clearly suffering from a certain level of malaise.  Both are also dependent on raw material exports, meaning the drop in commodity prices is seriously harming both.  Japan may be making a slight comeback – at least based on this week’s numbers – but they are hardly out of the deflationary woods yet.  The US and the UK are both showing some really strong results.  And, the EU is also showing some signs of life.  Germany is still growing and Spain is really starting to come alive.  France is slowing, but their numbers have been just barely negative.  Overall, it could be argued that we’re beginning to see positive signs from the EU QE announcement, but we certainly don’t have enough data to make a definitive call. 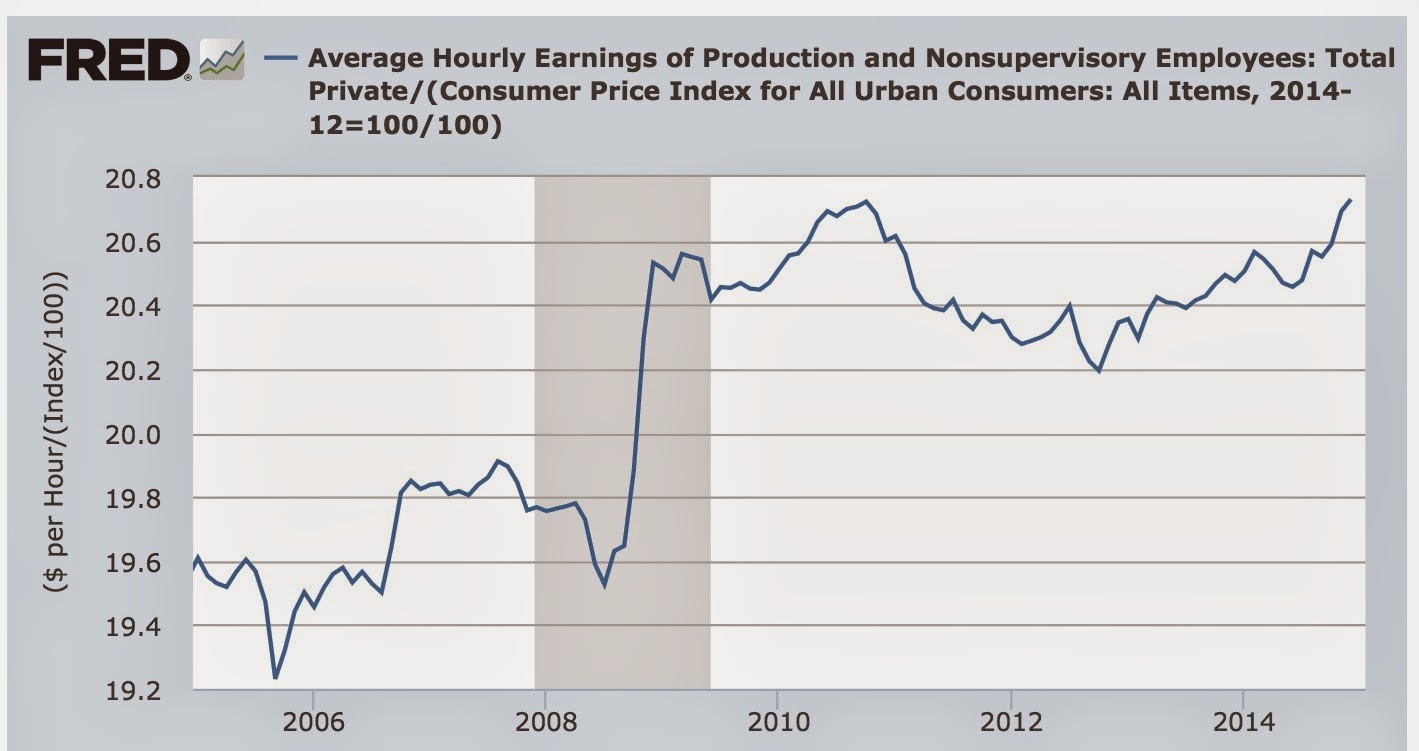 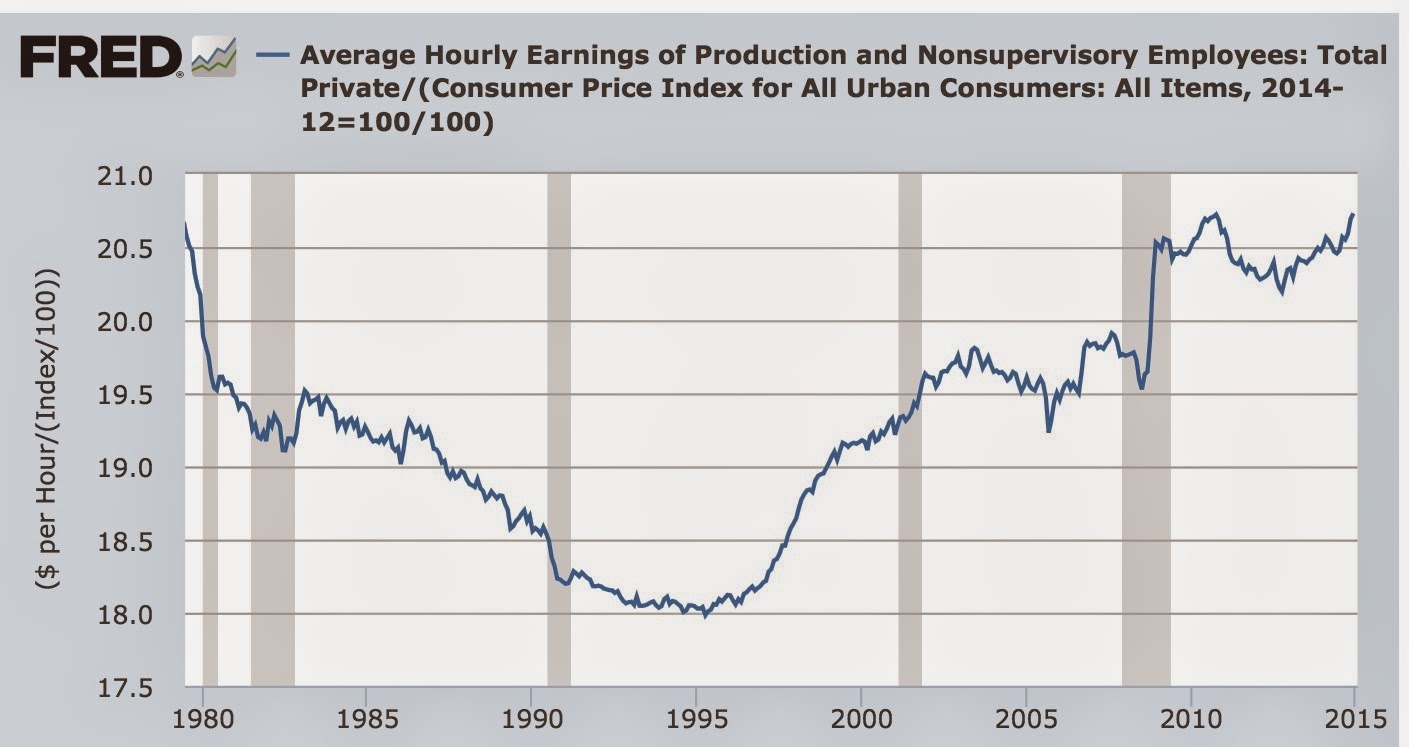 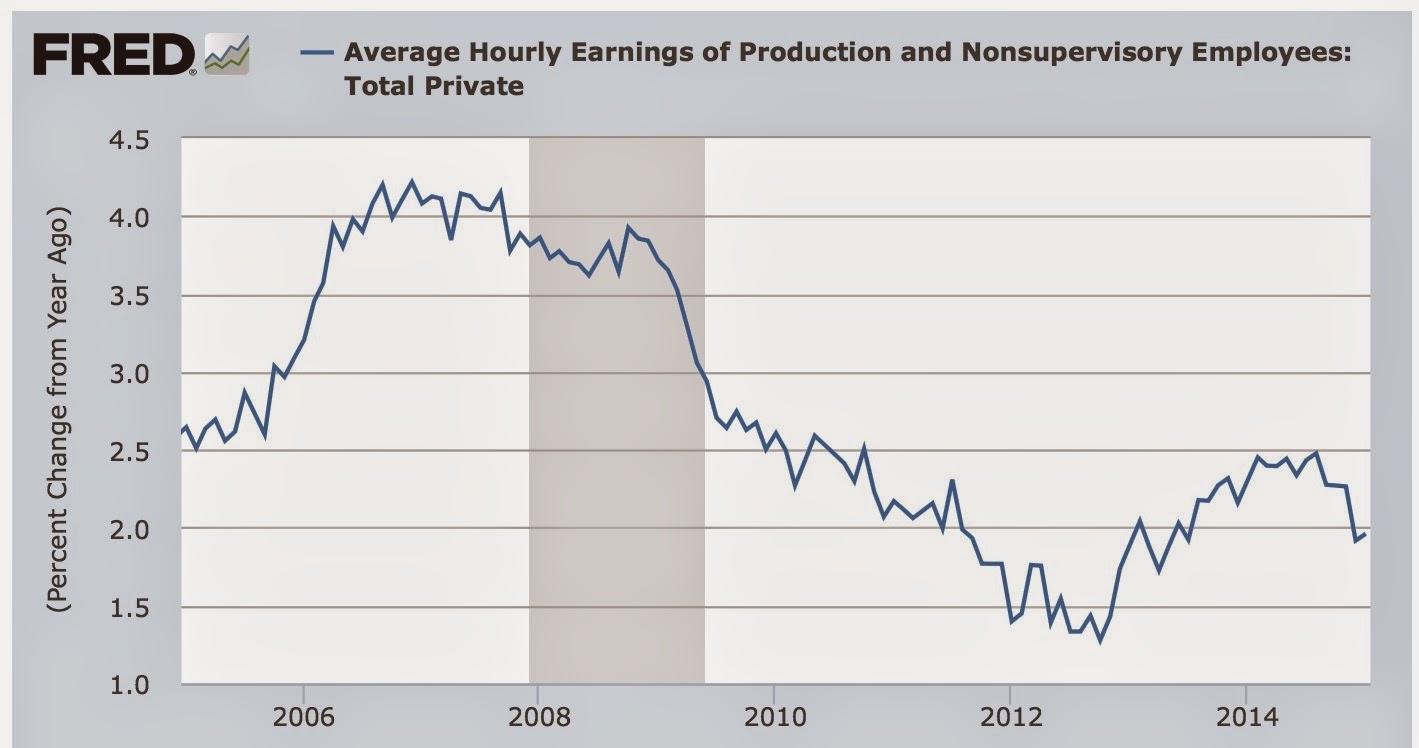 Since the economic expansion is well established, in recent months my focus has shifted to wages and the chronic heightened unemployment.  The headline numbers for January show a surge in employment over the last few  months, and also rebounded off of the decrease in wages from December.

Those who want a job now, but weren't even counted in the workforce were 4.3 million at the height of the tech boom, and were at 7.0 million a couple of years ago.  Since Congress cut off extended unemployment benefits over one year ago, they have risen to 600,000 higher November 2013 post recession low of 5.6 million.

On the other hand, the participation rate in the prime working age group has come back almost half from its post-recession low towards its pre-recession high.

After inflation, real hourly wages for nonsupervisory employees from December to January probably rose by +0.4% or more, in part because because lower gas prices will again show deflation. The  nominal YoY% change in average hourly earnings is +1.9%.

The more leading numbers in the report tell us about where the economy is likely to be a few months from now. These were mixed by with a positive bias.

This was pretty close to a blowout report, particularly with the upward revisions to the prior 2 months.  For the last three months we are averaging over 300,000 jobs per month.  The employment to population ratio in the prime working age group has risen significantly for the second month in a row, and has now made up almost half of its recession decline.  Most of the internals, including the leading internals, were positive.  Wages rebounded, completely taking back their December decline and then a little.  There is a reasonable chance that, in real terms, the average real wages for nonsupervisory employees made a 35 year high.

The relative negative still remains wages.  Nominal wage growth isn't accelerating at all.  All of the real wage growth is coming from a decline in inflation due to gas prices. 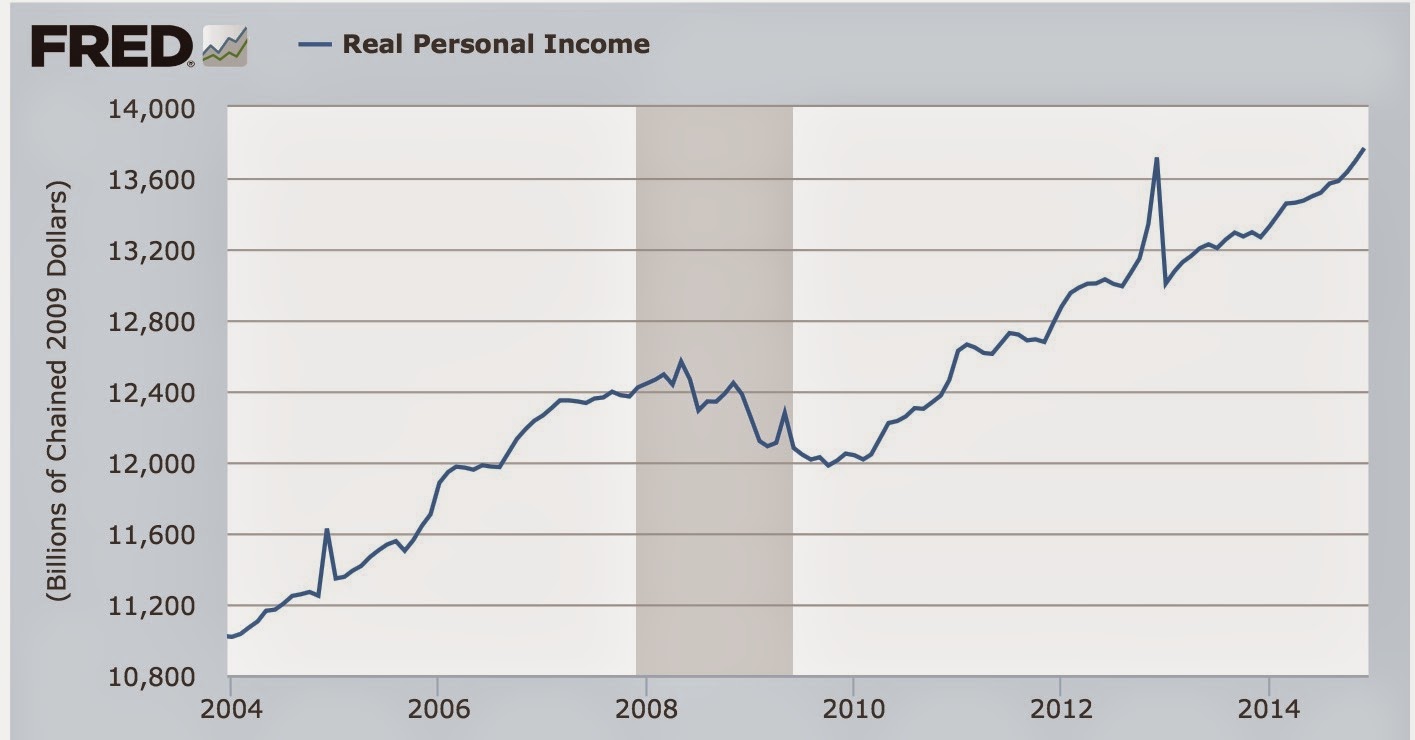 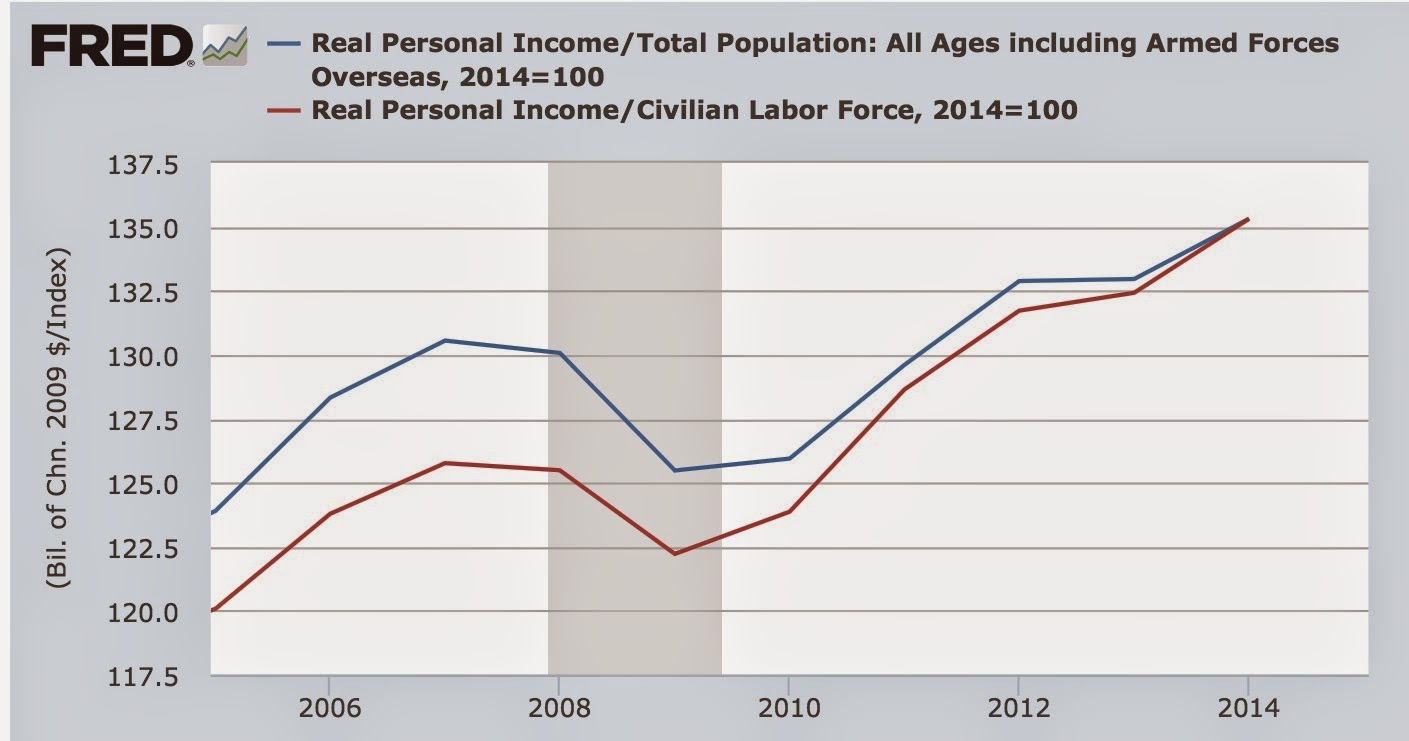 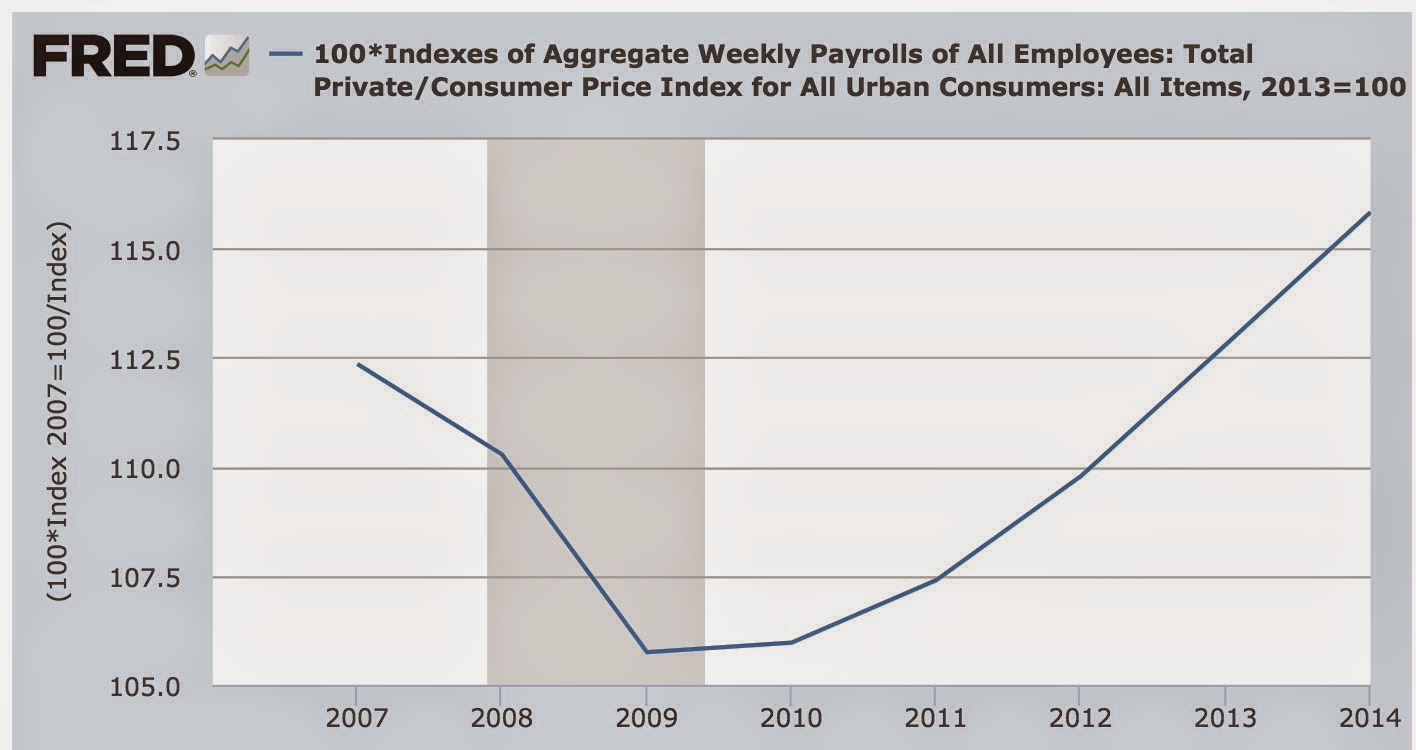 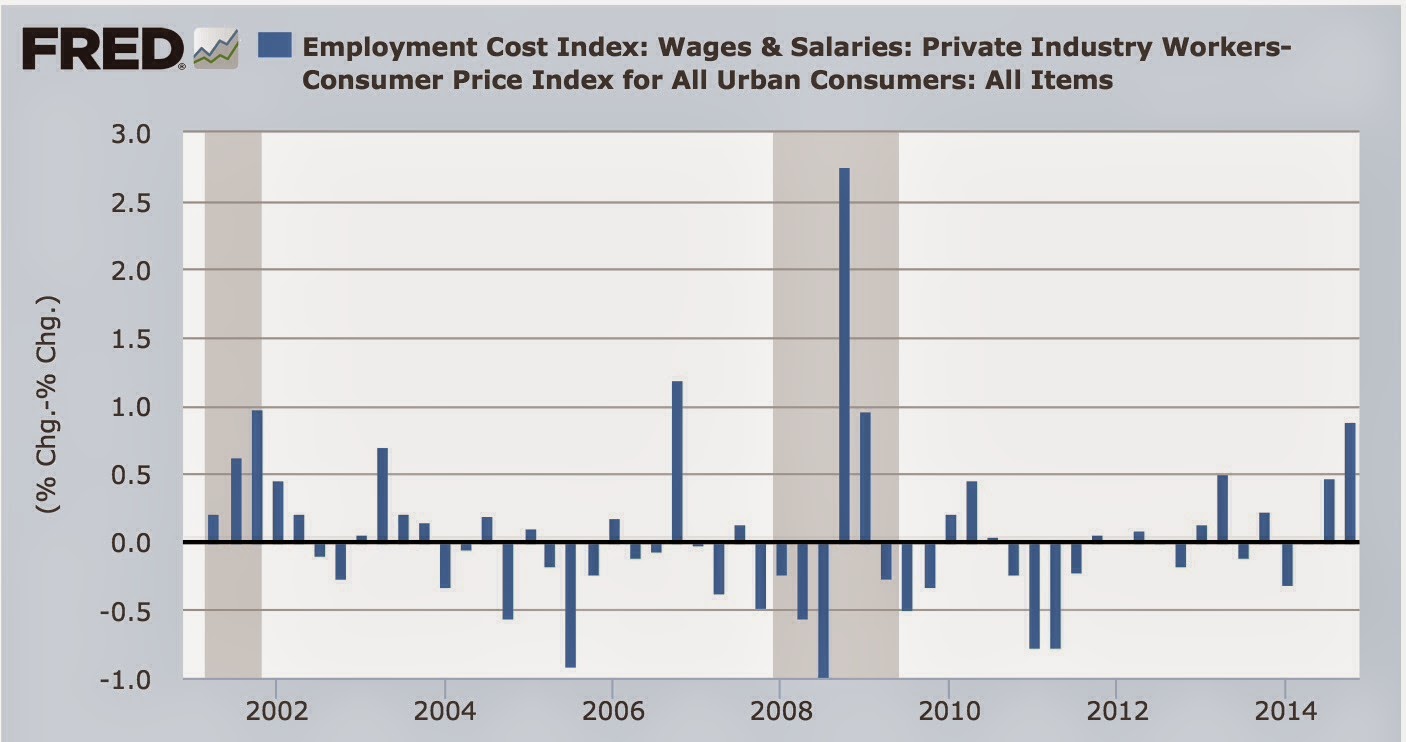 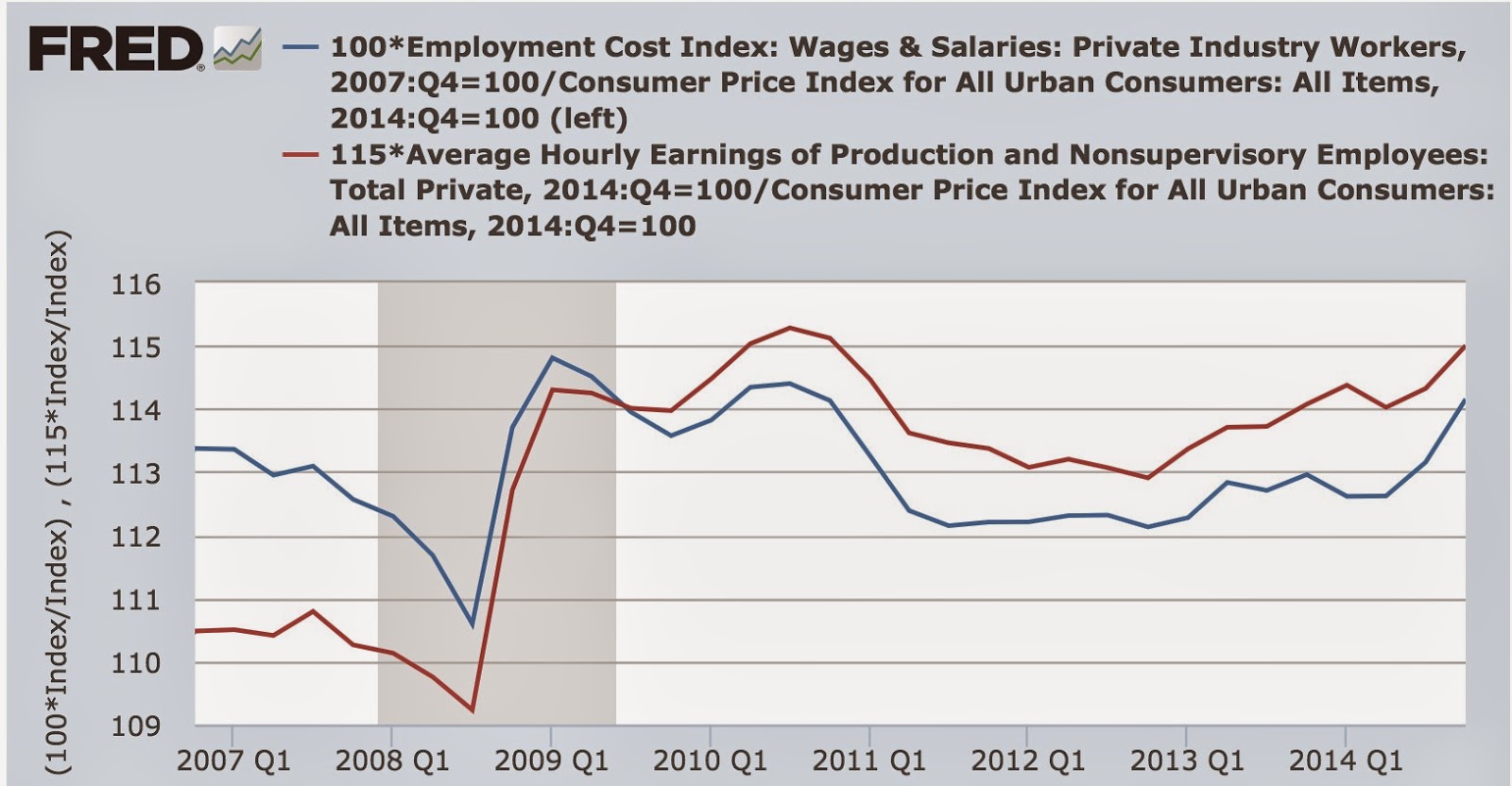 Why Did Australia Cut Rates 25 BPs?

I have been looking for the bottom in oil and gas prices, which tend to be very seasonal.  I think we saw it late last week.

International Economic Preview For the Week of February 2-6