International Week in Review; Peering Into the Mind of A Central Bank Editioin

Weekly Indicators for March 3 - 7 at XE.com

This week's edition of Weekly Indicators is up at XE.com.  Behind the decent February jobs report, a lot of the data is quite weak, if not actually negative.
Posted by New Deal democrat at 9:18:00 AM

In February 175,000 jobs were added to the US economy.  The unemployment rate rose slightly, up 0.1% to 6.7% . December and January were both revised upward by a total of +25,000.  Given the relatively poor data in a number of sectors that we have seen in the last couple of months, this was a surprisingly decent report - although there are a few cracks in the facade.

As usual, first, let's look at the more leading numbers in the report which tell us about where the economy is likely to be a few months from now. These were either positive or neutral.

Now here are some of the other important coincident indicators filling out our view of where we are now:


To reiterate, this was a surprisingly decent report, both in the headline and in most of the internals.  But as indicated above, there are some cracks in the facade:  the manufacturing workweek appears to have peaked, as has the number of aggregate hours worked in the economy.  Further, although seasonality is supposed to be removed from these reports, typically since 2009 wintertime has produced the best reports, and this year the best that has been managed is this "average" report, so the YoY comparisons in growth are declining.  Plus, the decline in real retail sales in the last couple of months argues for a softening in the labor market in the next few months.

So, all in all, positive, but with some cyclical worries.

http://community.xe.com/forum/xe-market-analysis/euro-yen-and-pound-technical-update
Posted by Unknown at 8:58:00 AM

The cutoff in extended unemployment benefits by Congress wasn't just vile, it explains much of the economic weakness so far this year

Before getting to the main subject of this post, let me say that I consider it an act of moral depravity to have cut off extended unemployment benefits when both unemployment and underemployment remain so high.  Even if I were to accept the critique that such benefits create a "hammock" making certain people comfortable in their unemployment, the fact is that millions of the unemployed are *not* comfortable in their unemployment. There simply aren't enough jobs to absorb the millions of people who have looked for a job and cannot find one.  That ought to be obvious from the fact that there are still nearly 3 unemployed people actively looking for work for every one job opening:

cutting off benefits to those people is an act of unconscionable cruelty, leading as it must to privation and maybe even homelessness for some.

But cutting off extended unemployment benefits at the beginning of this year wasn't just vile, it is actually harming the economy.  It appears to be the primary additional factor beyond the unusually severe winter weather in the raft of relatively poor data we have seen so far this year.

To begin with, let's quantify the scope of the lost benefits:

It is believed that another 600,000 or so lost benefits in February, which  brings us to 2,000,000 people having lost unemployment benefits roughly equalling $1200 a month so far this year.  Simple multiplication means a loss of $2.4 billion in spending ability per month, or $28.4 billion for the whole of 2014.  It is ultimately estimated that about 4,000,000 people may be affected.  That's a loss of $56.8 billion annually.

But it gets worse.  Let's stick with just the 2,000,000 people affected so far.  When a similar cutoff was being debated in 2011, the Department of Labor  noted tha

This is because, as Business Week noted in an article in December, "the unemployed reliably spend that money, creating a multiplier effect in the economy." As a result, the Labor Department estimated that there would be a net negative effect of $62 billion in 2012 from a cutoff then.

The Business Week article cited above indicates that a smaller, but similar multiplier of 1.55 was calculated by economist Mark Zandi of Moody's Analytics.

the proposal would increase outlays relative to those under current law by nearly $26 billion—by about $19 billion in fiscal year 2014 and by $6.5 billion in fiscal year 2015. The net increase in deficits over the 2014–2023 period would amount to about $25 billion because the proposal would also boost revenues by $0.5 billion over that period.CBO estimates that extending emergency unemployment benefits would raise gross domestic product (GDP) and employment in 2014 relative to what would occur under current law. Recipients of the additional benefits would increase their spending on consumer goods and services. That increase in aggregate demand would encourage businesses to boost production and hire more workers than they otherwise would, particularly given the expected slack in the capital and labor markets.

However, those positive effects on output and employment in 2014 would be partially offset by ... [the belief that] in response to the extension of benefits, some unemployed workers who would be eligible for those benefits would reduce the intensity of their job search and remain unemployed longer—which would tend to decrease output and employment. CBO estimates that those negative effects would be modest, though, in 2014 because most of the jobs that would not be taken by some of the people receiving the additional benefits would instead be taken by some of the many people searching for work who would not be eligible for those benefits.

It appears that the CBO did not address the spending multiplier issue, since its $26 billion estimate is close to the raw $28 billion estimate we obtained by simply multiplying the number of people affected by the average amount in monthly benefits received.

Even at a multiplier lower than 2, for example the 1.5 multiplier proposed by Mark Zandi, gives us a likely negative affect of GDP of about -0.3%.

Since almost 1/3 of all of the people who would be affected in all of 2014 were cut off in January, it is in the January and February consumer spending numbers that we would expect to see the biggest hit.  And so far, that is indeed what we have seen.

For example, here is the 4 week moving average of same store sales going back to the end of the recession (h/t Bearnobull):

Note that the YoY% increase in spending since the turn of the year is the lowest during the entire period.  For the last two weeks, including the week reported just yesterday, the ICSC same store sales index recorded YoY gains of only +1.4% and +1.5%, respectively, so the effect is continuing right up until the present.

Now here is a graph comparing real personal consumption expenditures (blue) and real retail sales (red).  Since PCE's are the broader measure, and encompass "wants and needs" vs. the narrower measure of retail sales, which are more focused on "wants," this comparison tells us how confident or pinched consumers feel:

As I have previously shown, in every business cycle since World War 2, YoY retail sales have declined further than YoY PCE's prior to the onset of a recession.  January 2014 marks the first month since the beginning of the 2009 economic expansion that YoY retail sales are significantly below YoY PCE's.

Real personal income minus transfer payments (such as food stamps and unemployment insurance) has also turned flat for the last several months:

There has been much commentary that the relatively poor winter weather only explained part of the slump in much of the economic data these last several months.  The sudden elimination of $1200 a month spending power to 2 million people since January first is an excellent candidate for explaining that slump.

So the cutoff in extended unemployment benefits isn't just vile, it is counterproductive as well.
Posted by New Deal democrat at 8:00:00 AM

A Quick Check of Where the Markets Are

With all of the political unrest over the last few days, let's take a look at the SPYs to see how the equity markets are reacting. 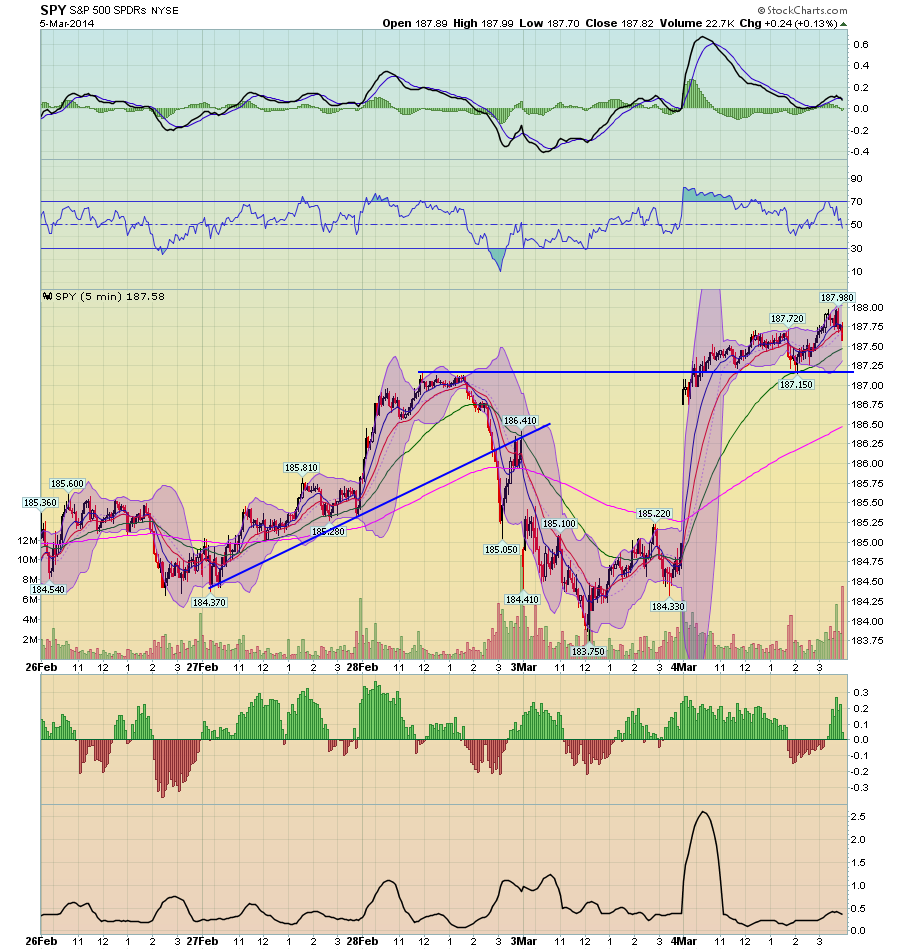 On the 5-minute, 5 day chart, we see three primary movements.  The first is a two-day upswing on Feb. 27-28, which included a big move on the 28th.  This was followed by Monday's gap lower.  But looking more closely at Monday's price action, we see a morning sell-off followed by a decent rebound in the afternoon.  Finally, yesterday prices gapped higher, recovering Monday's losses.  Prices also closed near the high of the day. 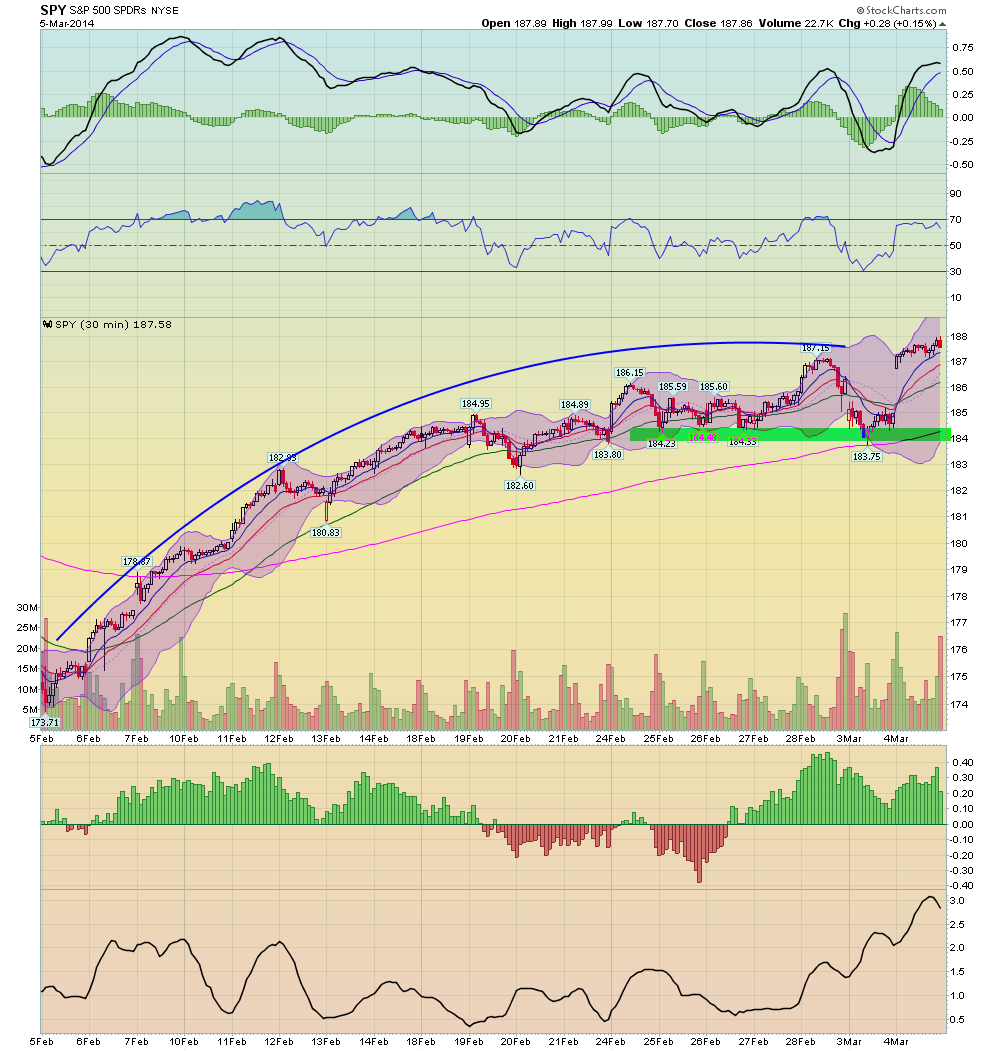 On the 30-day chart, we see prices have an upward curve.  Starting on Feb. 24, prices moved more sideways, consolidating gains.  On this chart, the last two days of activity appear as more of a blip. 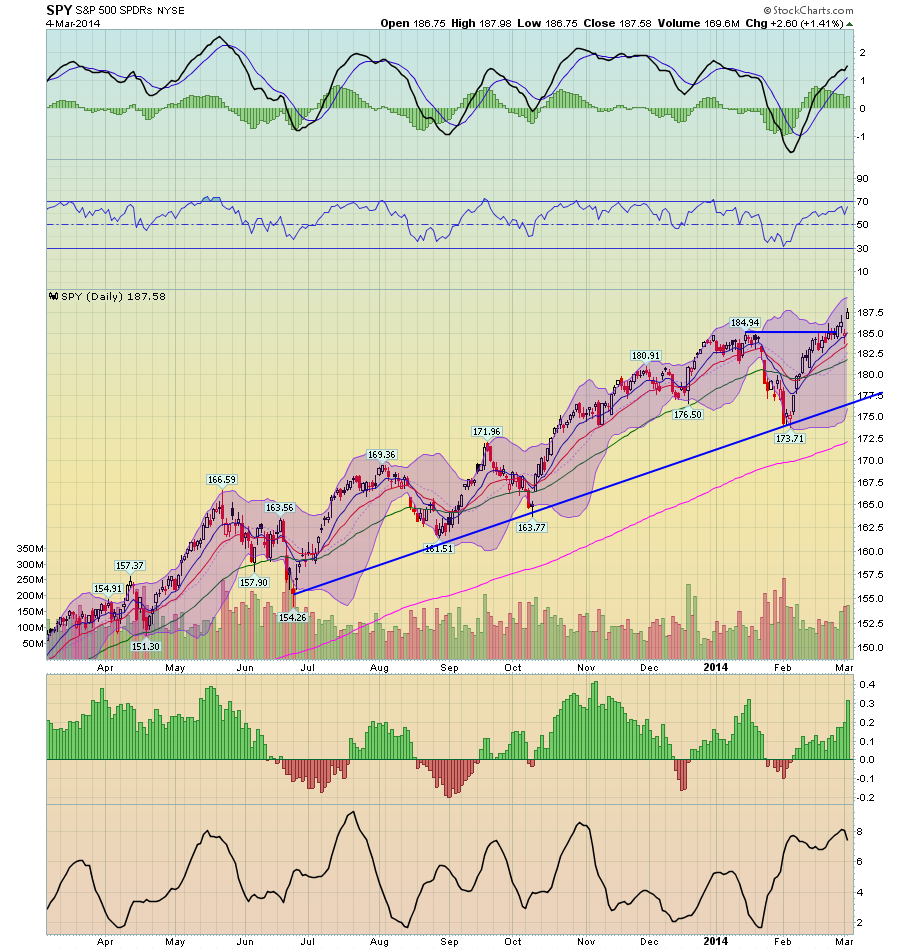 Finally on the daily chart we see the primary uptrend that started in late June 2013 is still firmly intact.  Also note prices have moved through key resistance in their latest rally, with the sell-off showing prices simply moving to the 10 day EMA.  But the underlying technicals are still solid: the MACD is rising and the CMF shows a strong inflow of money, especially yesterday.
Posted by Unknown at 7:33:00 AM

Paul Krugman agrees with me! 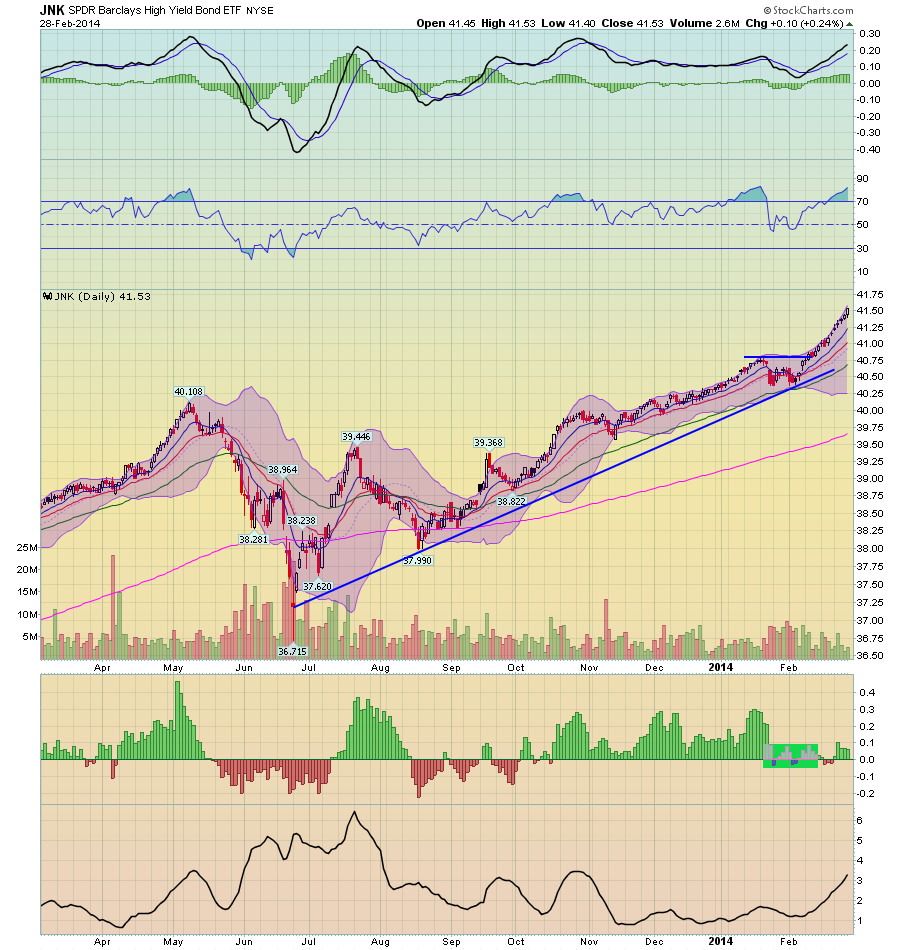 The above chart of the junk bond ETF shows that investors are still reaching for yield.  The above chart is still very bullish.  Let's place that information into the following context: 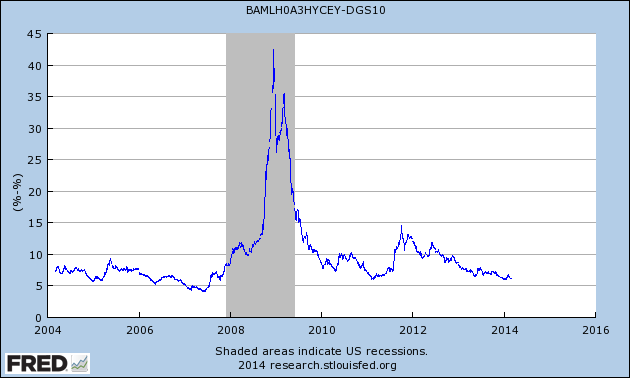 Above is a graph of the CCC yield minus the 10-year CMT Treasury spread, which has been declining for the last 2 years. 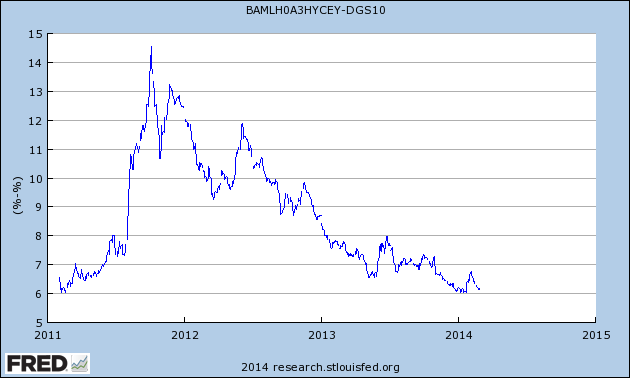 The graph above places this data into a 2-year time frame.

And For the 8,000 Bonddad Blog Post .... International Week in Review, The Big US GDP Miss Edition