Weekly Indicators for December 14 - 18 at XE.com

The resiliency of the US consumer continues in the face of the global economic hurricane to be amazing.
Posted by New Deal democrat at 8:32:00 AM 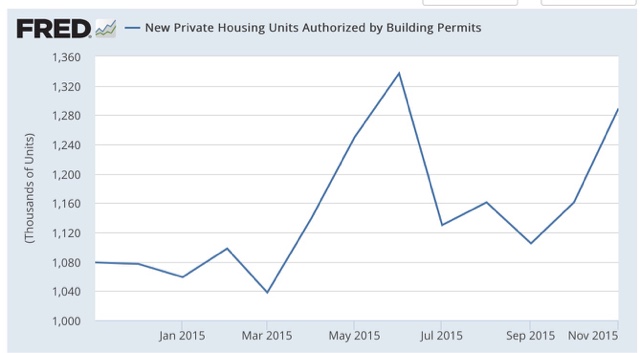 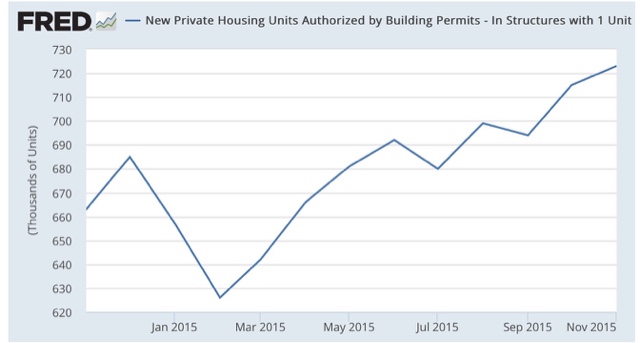 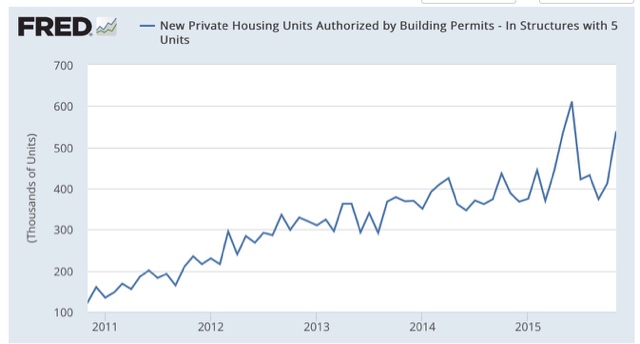 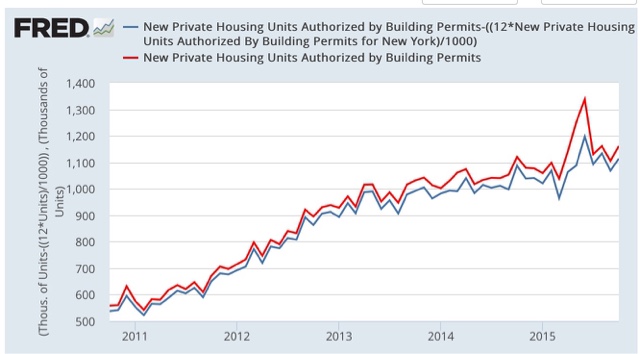 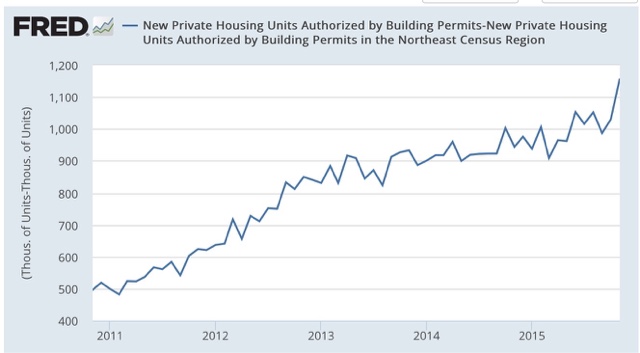 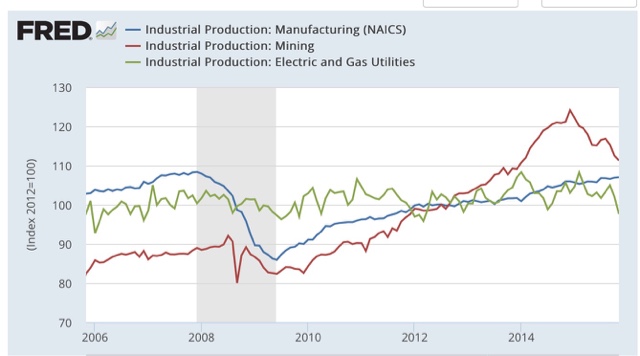 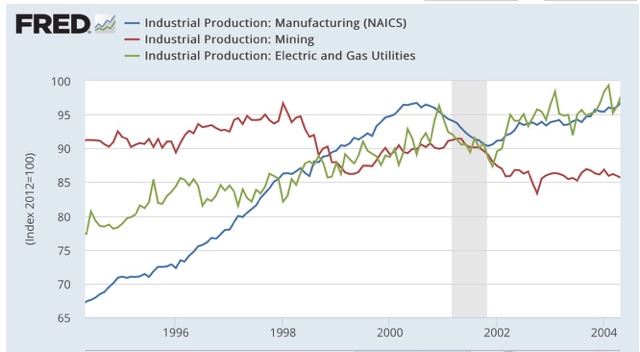 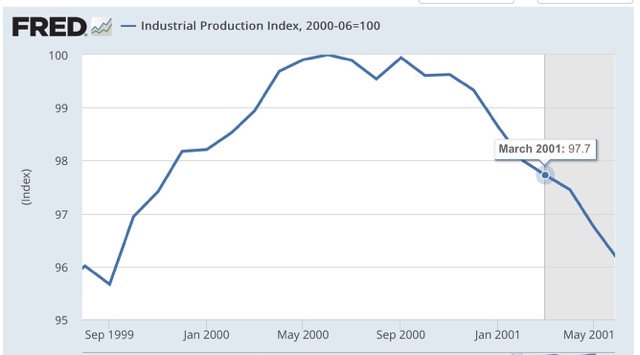 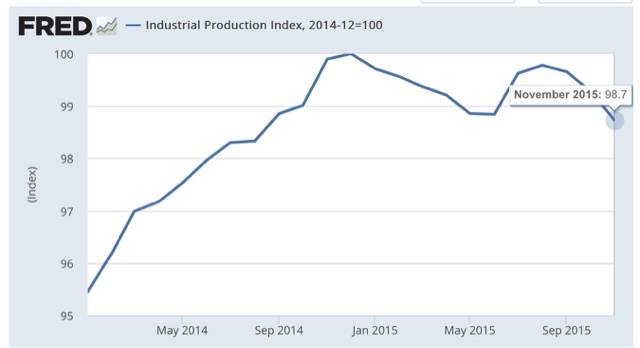 I'm on the road right now, so this will be a brief note without graphs. I'll update later.

Housing can be summarized as follows:


Industrial production, on par with the last few months, wasn't nearly as bad as the headline suggests:

I have a new post up at XE.com looking at this metric 4 different ways, including as a harbinger for employment, as a marker for early vs. late cycle expansioin, and as a long leading indicator of recession.
Posted by New Deal democrat at 9:47:00 AM

The market for junk bonds is imploding.  Prices for CCC-rated corporate bonds are down 21% from their peak: 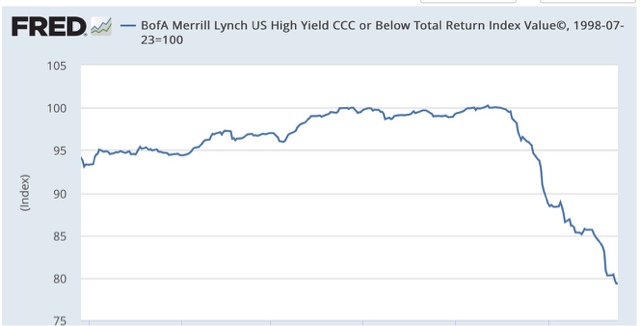 Oh, wait.  I'm sorry, that was 1998 Asian currency crisis.  It was another 2 years and 9 months after that implosion before a US recession occurred: 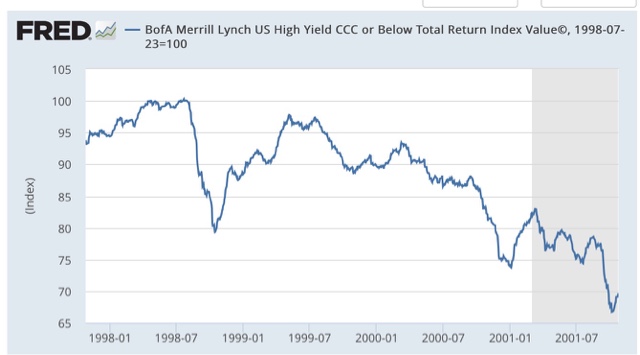 This is the current graph of CCC-rated corporate bonds: 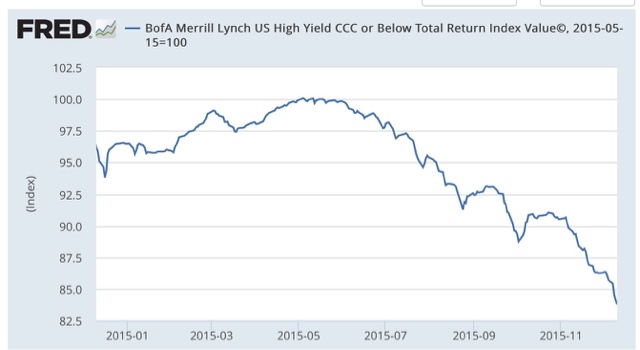 While a bond implosion is never to be lightly dismissed, I think it is pretty obvious that our current situation, where the carnage is centered on the Oil patch and other commodities, and the service economy remains in a decent expansion, is more like 1998.

The bottom line is that, while low grade corporate bonds almost always blow out on the cusp of of early stages of a recession, the converse is not true.   You can have a junk bond blowout without triggering or indicating a recession.

I suspect it won't be over until a dead whale - maybe a good-sized energy producer or utility - washes up on the beach, prompting Fed and/or Treasury action, just as the bankruptcy of Long Term Capital Management did in 1998.  But so long as the consumer keeps buying more houses and cars, and generally spending as measured by real retail sales, I don't see any imminent general problem.

Weekly US Equity, US Bond Market and International Summary

Forecasting the 2016 election economy: the "Bread and Peace" model

This is the latest installment in my series, "Forecasting the 2016 election economy," a real-time experiment to see if I can forecast the outcome of the November 2016 Presidential election by making use of economic indicators up to a year in advance.

We have already seen that a number of economic indicators have a good track record of correlating with the election result, provided we know their values in the first 3 quarters of the election year.  We have also seen that at least one long leading indicator, housing permits, has some validity in forecasting the election day status of changes in the unemployment rate, one of the best such economic indicators. We have seen that 80% of the time, just knowing whether or not the economy is in recession in Q3 of the election year has accurately forecast the popular vote winner in the election, going back over 150 years!   Finally, we have seen that the long leading indicators through Q3 of 2015 suggest that it is more likely than not that this economic expansion will continue through Q3 of next year, and thus favor the election of the Democratic Party nominee.

Here is a graph showing how the "Bread and Peace" model has performed since 1952, with its last projection before the 2012 election: 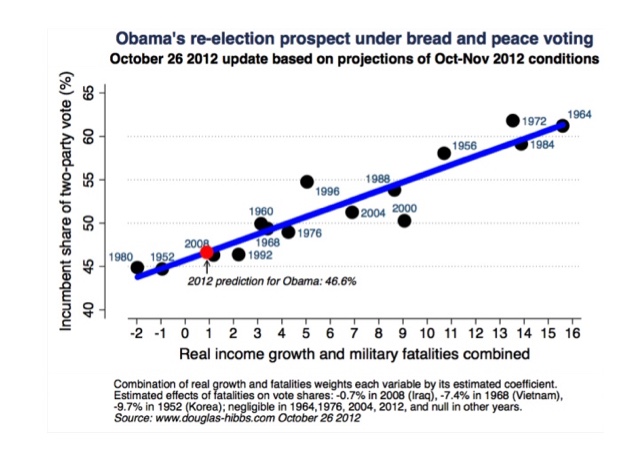 As you can see, the model stumbled somewhat badly in 2012, forecasting that Obama would win only 47% of the vote, when in fact he received about 53%, as shown in this "post mortem" graph below: 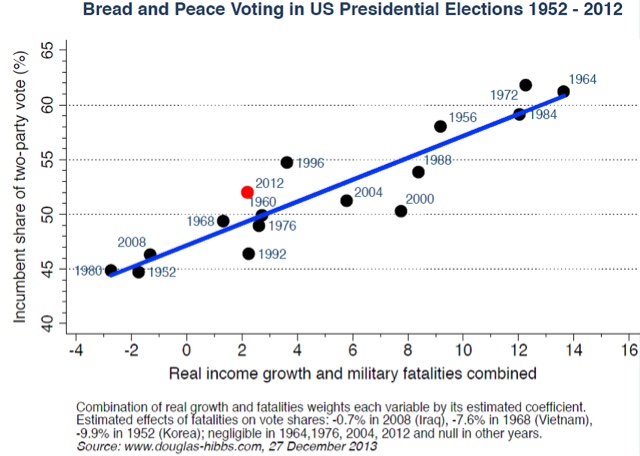 This is because "real disposable personal income" was one of the poorest-performing consumer measures of Obama's first term, growing by only 3%  through August, before increaseing another 1.7% in September and October, to be up 4.7% on election day, with much of that increase coming in just the last few months before the election: 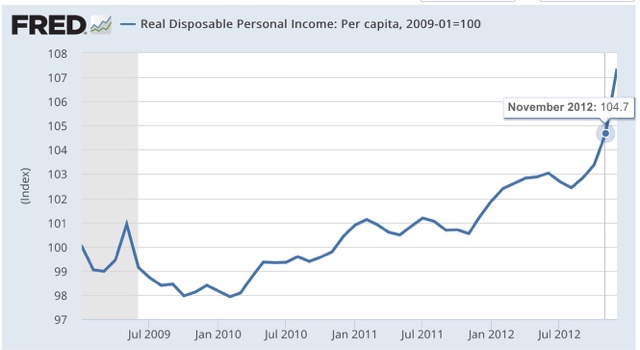 This highlights an unusal feature of the model. the last 3 months before the election count for fully half the wight of the entire result. Each successive preceding quarter counts for about half of th subsequent one.  thus if real disposable personal income per capita grew linearly by 10% in the first 3 1/2 year s of a presidency, but did not grow in the lsat 3 momonths before the election, the model projects only +5% for this metric.

Since real per capita disposable income almost always grows outside of recessions and their immediate vicinity, this is n accord with our previous discussioin:   a flat - or declining measure right before the election usually  means a recession - which is exactly what the simple model indicating that a 3rd quarter recession in election year predicts the popular vote winner 80% of the time.
So what does the model suggest now?  Let's take a look at 3 Presidential elections for which the model predicted similar results, and did not have a war (such as in 1968) to detract from the numbers. 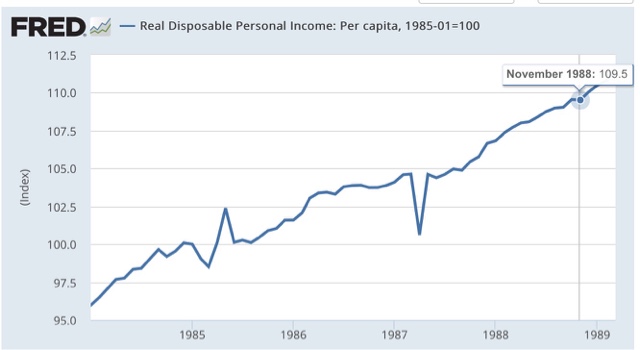 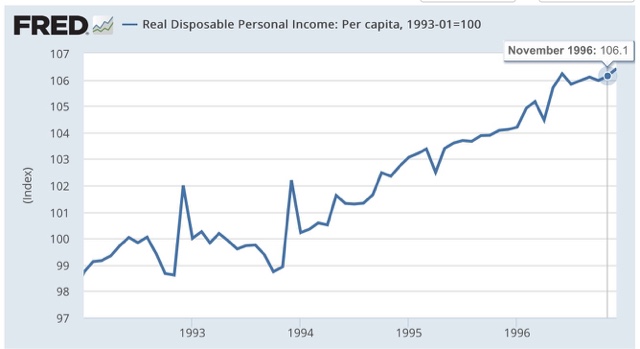 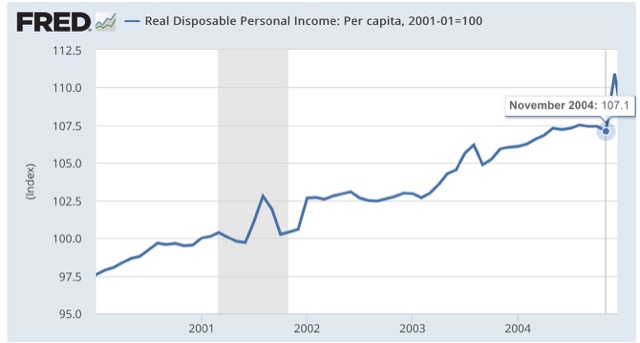 In all 3 cases, "real disposable personal income per capita" rose fairly linearly throughout the preceding 4 years, with results on election day of +9.5%,  +6.1%, and +7.1%, respectively. 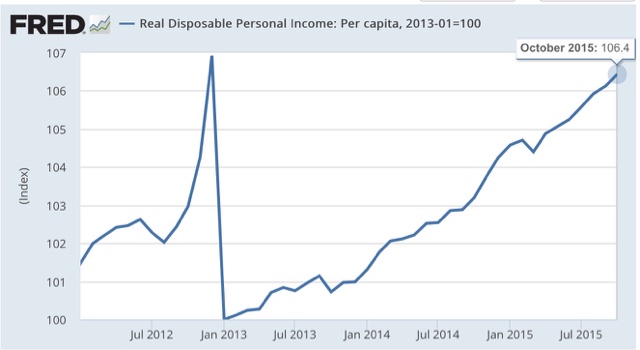 We don't know what it's values will be for the next year.  What we can say is that, *IF* real disposable personal income per capita continues to grow at the average rate it has since the beginning of 2013, it will be approximately +8.6% on election day, and the "Bread and Peace" model will favor a Democratic victory with the nominee receiving somewhere on the order of 53%-54% of the vote.

Of course, this isn't a real forecast, since we won't know the final equation until election day next year.  So we need to see if our leading indicators can help us out.  And it also suggests that we should not rely on one single metric, but rather an index of metrics, to improve outocmes.  As it happens, a British team has done just that with the Index of leading Indicators.  Those will be the subjects of my next posts..
Posted by New Deal democrat at 9:59:00 AM