Weekly Indicators for Februrary 13 - 17 at XE.com

Tax withholding is having a rocky February so far.
Posted by New Deal democrat at 8:08:00 AM

The shallow industrial recession is fading in the rear view mirror

A year ago the "shallow industrial recession" induced by the strong US$ and imploding oil patch was bottoming.  At that time I described the historical pattern: 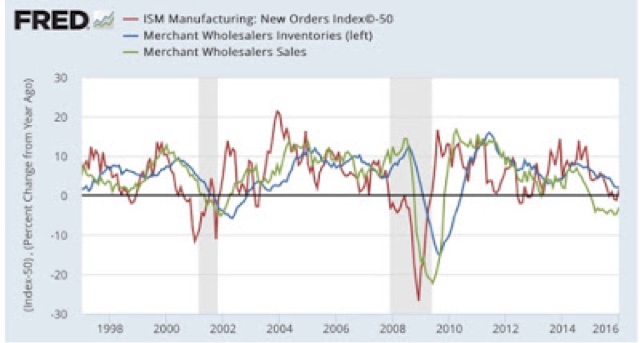 At that time I concluded:

If this is an incipient recession, then I would expect inventories to follow sales, which means that ISM new orders are giving a false signal.  On the other hand, if this is simply a slowdown, like 1998 (far left in the first graph), then sales should turn positive, and like 1998 inventories will not decline, in which case it is elevated inventories that are giving the false signal.

Since then, ISM has withdrawn permission for the St. Louis FRED to republish its data. Fortunately, the overall ISM index tends to follow the new orders component with a slight lag, and Doug Short keeps track of that: 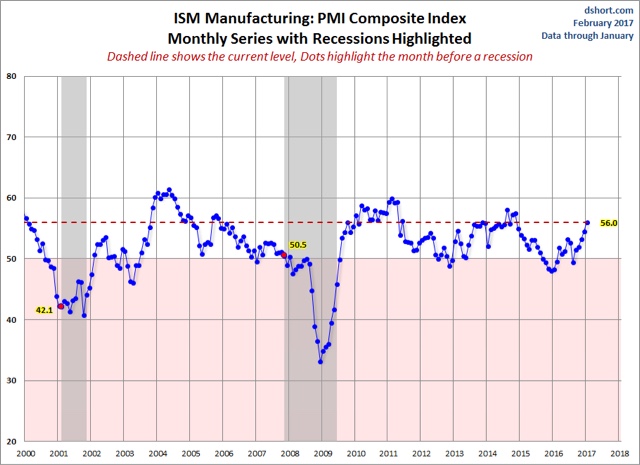 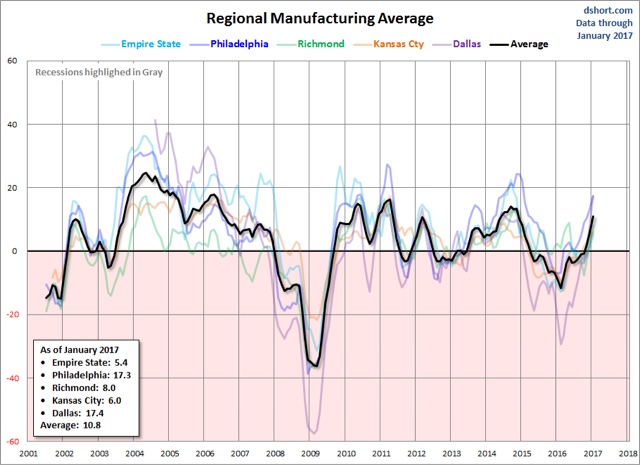 So, what has happened with total business sales (including manufacturer, wholesaler, and retailer) and inventories?  Here's the graph:

Exactly like 1998, sales have taken off again, while inventories did not decline. Since one year ago, they have risen, but slightly.

As a matter of course, the total business and wholesaler inventory to sales ratios have declined.  (I include the latter because it has been less influenced by secular "just in time" inventory issues):

The model worked just as I expected. The shallow industrial recession is fading in the rear view mirror.

January was a good month for housing permits and starts

I wanted to make a brief comment on this morning's report on housing permits and starts.  Bottom line: this was a very good report.

Here's why:
Total permits improved while single family home permits declined slightly from last month's post-recession high for a single month, due to a big jump in multi-family permits.

I do expect housing growth to slow down and possibly stop by about mid-year due to both higher interest rates and negative YoY real wage growth. But in the meantime, housing is doing well, and this will contribute to good general economic growth throughout this year.
Posted by New Deal democrat at 10:13:00 AM

At first blush yesterday's negative industrial production print gives the lie to the proposition that the economy has left last year's "shallow industrial recession" behind, as it looks to be going mainly sideways:

But a closer examination shows that is not the case.  Industrial production is broken up into three groupings: manufacturing (by far the biggest), utilities, and mining (including oil and gas).

So here is the information for manufacturing (blue. left scale) and mining (red, right scale):

Although the trend is modest, manufacturing has broken out to new highs.  And the energy patch is clearly seeing a rebound.

Which means that the *entire* reason for the decline is utilities:

Note this graph is seasonally adjusted.  But whenever most of the country has an unusually warm winter -- as is the case this year -- it shows up as a decline in energy (i.e., heat) production.

So you can blame the downturn in industrial production on the Great Global Warming Hoax.
Posted by New Deal democrat at 8:00:00 AM

This morning's inflation news was even worse than I expected based on the increase in gas prices.

This means real nonsupervisory wages are now actually *down* -0.1% YoY for the last year.

Here is the actual level of real nonsupervisory wages for the last 3 years:

Note that real wages rose due to the steep declined in gas prices in 2014-15, and have actually fallen -0.6% since their peak half a year ago.

Meanwhile even though nominal retail sales had their a good month, up +0.4%, and December waas revised higher, due to the jump in inflation, real retail sales declined slightly:

How is it possible that people are spending more even though they are earning less, and interest rates are up since last July?  They are saving less:

The personal savings rate has been declining slightly for nearly a year.  It's not bad compared with the last 25 years, so there's no danger sign at this point.

In any event, inflation has already blown past the Fed's anticipated trajectory. Now we see if 2% is a target, or actually a ceiling.  I say ceiling.

One thing to watch over the next week is how short and long term bonds react.  Do long bond yields go up? (relatively good news) or down (bad news). Does the yield curve remain intact or start to compress?
Posted by New Deal democrat at 9:02:00 AM

The state of the American consumer as 2017 begins

Along with monthly and quarterly long and short leading indicators, and the high frequency weekly indicators, the fourth primary method I use to forecast the US economy is to monitor the health of the American consumer.  It is the system I used to forecast the 2007 recession way back in my early Daily Kos days.

A thought for Sunday: No, Trump isn't imploding -- but the opposition is broad and intense

[You know the drill: it's Sunday, so I can eschew wonky economics and speak my mind freely.]


My post from two weeks ago, "No, Trump isn't Imploding" got picked up by a few other sites within the past few days, and I wanted to follow up because we have a fuller picture of public opinion now.

Basically, Trump still isn't imploding. He is holding his base. In fact, there is a little economic evidence that they are putting their wallets where their mouths have been. BUT, on the other hand, the opposition to Trump is revealing itself as broad-based and intense, in a way that hasn't been seen in America since at least the 1960s (if not the 1930s or 1860s). 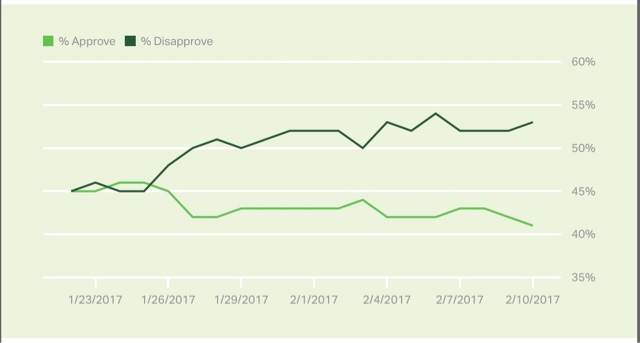 Three weeks after the start of his Presidency, Trump's last approval rating was 41%, down from 45% on his Inauguration Day. He has been between 41% and 43% for the last two weeks.

That's simply not an implosion.  And his GOP base stands behind his controversial Executive Decrees.  For example, here's the breakdown on support for his Muslim exclusion decree:

But while Trump isn't imploding, the opposition to him is broad, as shown in the increase of disapproval ratings shown above from 45% on Inauguration Day to 53% in the past week.

Moreover, the opposition is intense, as shown by the 45% support for Trump being impeached as evidenced by a PPP poll several days ago: 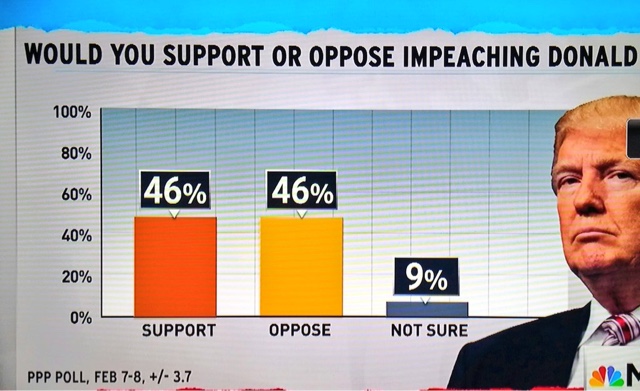 In short, the mushy "bipartisan-y" center so worshiped by the likes of the late David Broder has all but disappeared. Red and blue America are at complete loggerheads.

There is some evidence, by the way, that the optimism of GOPers, as shown in Gallup's economic confidence survey: 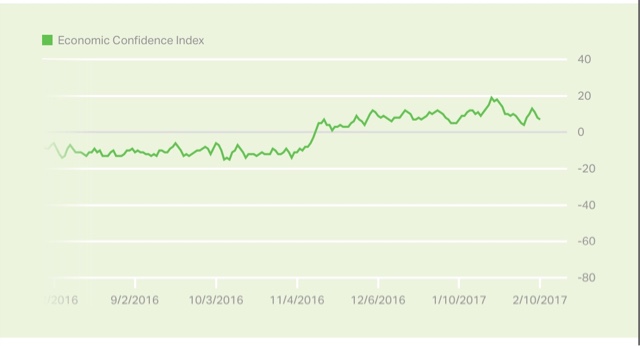 is showing up in real consumer spending. January is typically the month in which consumers spend the least.  Two weeks ago I noted that so far spending was lackluster.  Well, that has changed.  In the last 21 days, consumers are spending close to 25% more than they did one year ago: 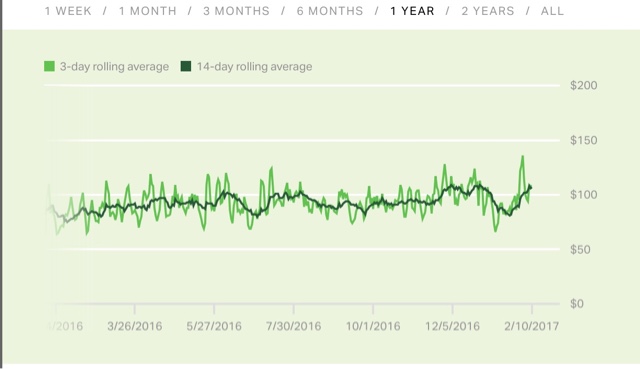 This spending is at the highest level since before the 2008 recession.  I have no way of knowing whether this spending is motivated in part by Trump's presidency, but the coincidence is there.

In the short term, notice that the Congressional GOP has largely gone silent.  No big statements by Paul Ryan or Mitch McConnell, and no big Congressional legislation being shepherded to Trump's desk so far. I think they are in a wait-and-see mode.  There is nothing for them to gain with their base by opposing Trump now.  But if he does implode, they don't want to be associated with that implosion.

In the longer term, for Democrats, Trump and the GOP are going to be judged on whether or not they deliver the goods to a majority of Americans, and do it in a way that does not appear mean-spirited. That means, for example, deporting Illegals who have engaged in violent crimes or theft. It does not mean splitting up families by deporting the working parents of American children who have been here for several decades and whose only wrongdoing was using a false Social Security number.  It also means delivering on jobs and wage growth -- something that I doubt very much Trump of the GOP will be successful in doing.

While a number of statistical analyses of the 2016 election have pointed to the primacy of racial attitudes, as for example, shown in this graph: 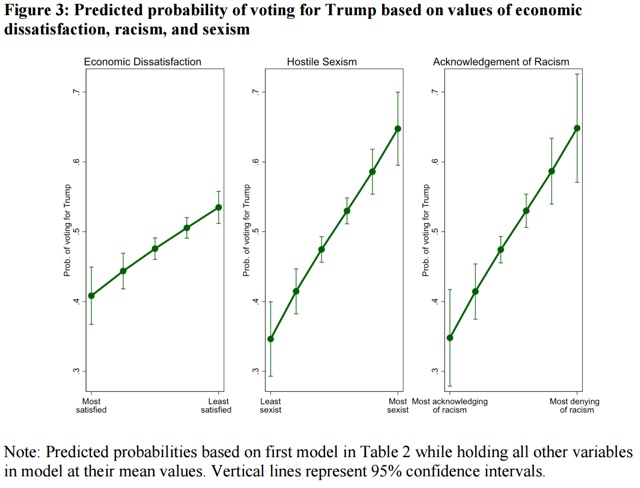 there is not a 100% correlation between that and Trump votes.  In other words, while it may not have been the most common motivator, there were a significant percentage of white voters who did not take Trump's remarks about Muslims or Mexicans seriously, or for that matter that he was really going to repeal ObamaCare.  This last group are the swing voters who can be persuaded back into the Democratic camp by candidates who reject Wall Street and embrace economic progressivism.
Posted by New Deal democrat at 8:19:00 AM