Weekly Indicators for January 27 - 31 at XE.com

My column describing Weekly Indictors is up at XE.com

International Week In Review: Despite the EM Rout, Some Surprisingly Good Numbers Edition 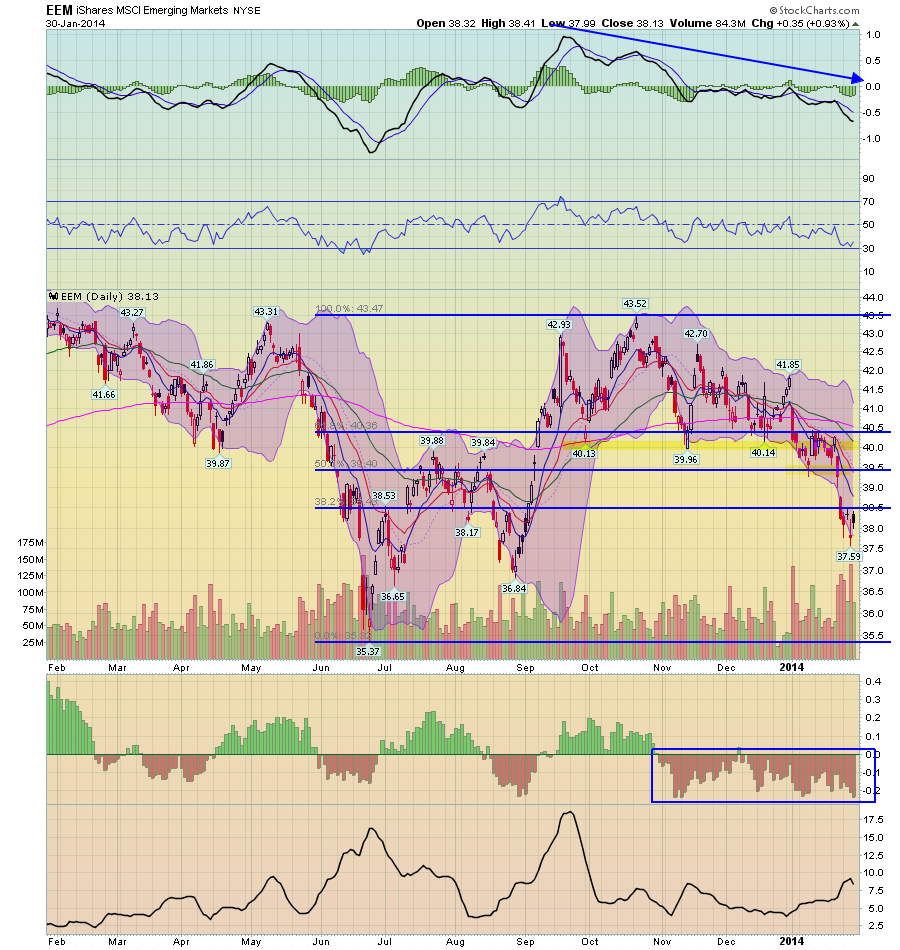 Above is a chart of the emerging market ETF.  While it has broken the 200 day EMA and pulled the lower EMAs through the 200 day EMA, prices appear to have stabilized around the 38 level.  Finally, the sell-off has occurred on higher volume.

However, notice the declining momentum and negative CMF reading.  This ETF won't be making a strong relief rally anytime soon.
Posted by Unknown at 7:25:00 AM

A couple of years ago I wrote a few posts describing how, if you compare PCE's with real retail sales, you get a good idea where you are in the economic cycle.  I've published an update over at XE.com, and also updated my look at real per capita retail sales, which are a short leading indicator.
Posted by Unknown at 5:07:00 AM

Flight to Safety Since January 1 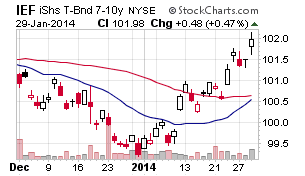 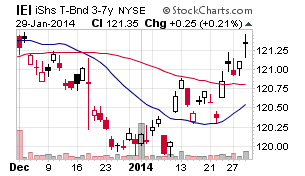 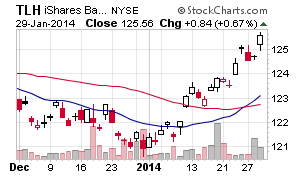 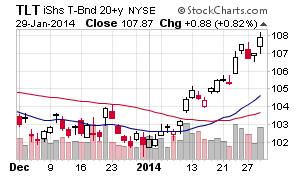 Above are four charts, all of which are from US treasury market ETFs.  The IEIs are for the 3-7 years, IEFs for 7-10 year, TLHs for 10-20 year and TLTs for 20+ years.  All have rallied since the beginning of the year.

What this shows is since January 1, we've seen a fundamental shift in trader's perception of the market as they prefer the relative safety of treasuries over stocks.

According to Business Insider, last night Euro Pacific Capital president Peter Schiff actually took the position that "people don't go hungry in a capitalist economy.....  It's socialism that creates scarcity, that creates famine," Schiff said. "In a free market, there's plenty of food for everybody, especially the poor."

Asked who should earn a wage of $2 an hour, Schiff replied, "What the politically correct word for 'metnally retarded'?"

Never mind that in the Great Depression, with 25% unemployment in 1932, people died of starvation in nearly every single town, and at one point it was estimated that 25% of all schoolchildren were malnourished.

All of those perfectly competitive free market equations that people like Schiff love don't guarantee that people won't starve, they just (supposedly) assure that the most economically efficient number will starve.

So the answer to Schiff's question appears to be, "Peter Schiff."

He walked into that one.

A reminder about housing sales and prices

House prices show a lot of seasonality, so the only good way to keep track of them is YoY, and YoY price increases are still running very strong.

So how can I be forecasting a decline in house sales if prices have continued to rise so strongly?  Because sales will peak and turn down before prices.

Recall that sales peaked a full two years before nominal prices turned down.

While I don't believe we are in a new bubble (adjusted for income, prices haven't risen nearly so much off their bottom), there has been quite an outcry that traditional first time homebuyers are priced out of some markets.

In any event, I believe the transmission of higher interest rates through the housing market will unfold the same way.  Sales will turn down before prices do.

But isn't inventory still tight?  Yes, but remember that the months-of-supply metric can resolve either through more inventory coming on the market, or monthly sales declining, or both, which is what happened when the housing bubble burst.  If in the next few months sales decline to 900,000 annualized, that will go a long way to a "normal" number of months of supply. 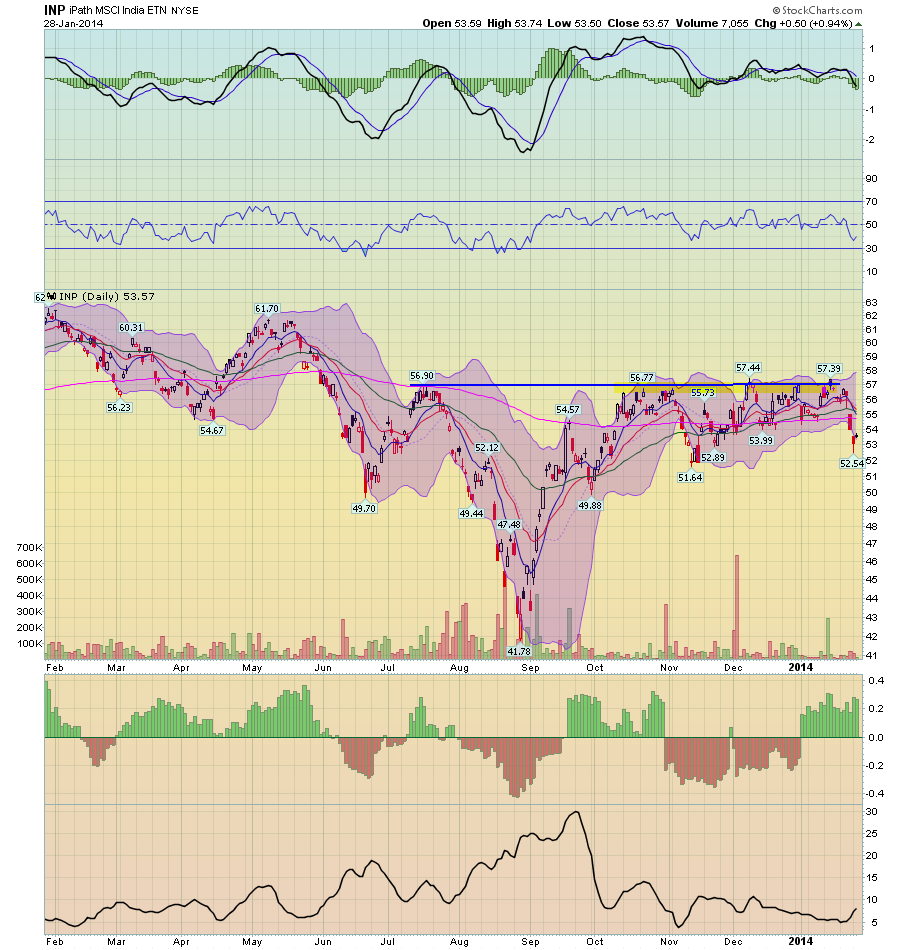 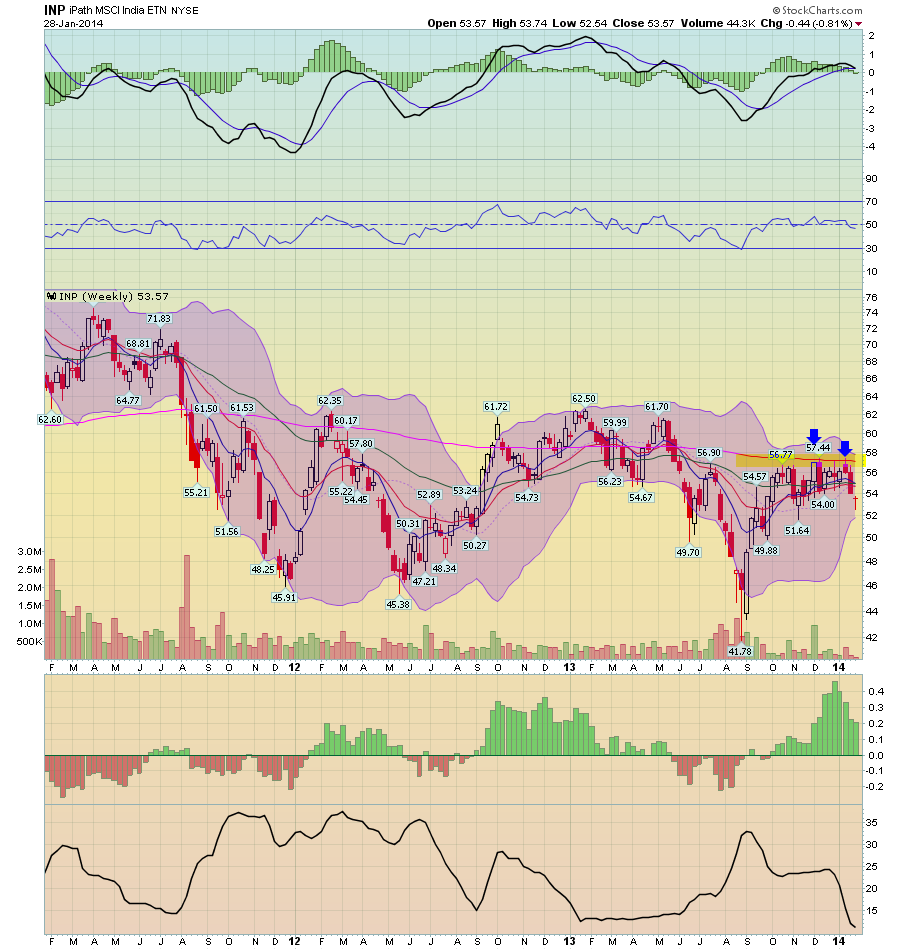 The top chart is the daily Indian ETF chart, while the bottom is the weekly chart.  Both charts show the market hitting resistance in the mid 57 area.  Anytime a market hits resistance this regularly, we need to ask why, which is almost always answered by the fundamentals.

The Indian economy is experiencing fairly serious structural problems.  On one hand, inflation is high bringing with it all the associated problems.  At the same time, growth is slowing, leaving the central bank in a rather unenviable position.

The housing slowdown has already begun

With yesterday morning's surprise -50,000 month/month decline in new home sales, the 2013 housing data is in the books, and it confirms that in 2013 there was a marked slowdown in the housing recovery.

Below is the graph of building permits (blue), starts (green), new home sales (beige) and existing home sales (orange) for the last three years, normed to 100 at the start of each year:

The simple fact is that the housing market follows interest rates usually with a six to nine month lag.

The past history is that a 1% increase in interest rates typically is consistent with a 100,000 decline in permits and starts.  The data that we have seen in December confirms that in 2013 we already have seen a slowdown, and is in accord with my forecast that at some point this year, we will see a YoY change of -100,000 in permits and/or starts.  Could it be different this time?  Of course, but history is on my side.
Posted by New Deal democrat at 8:00:00 AM 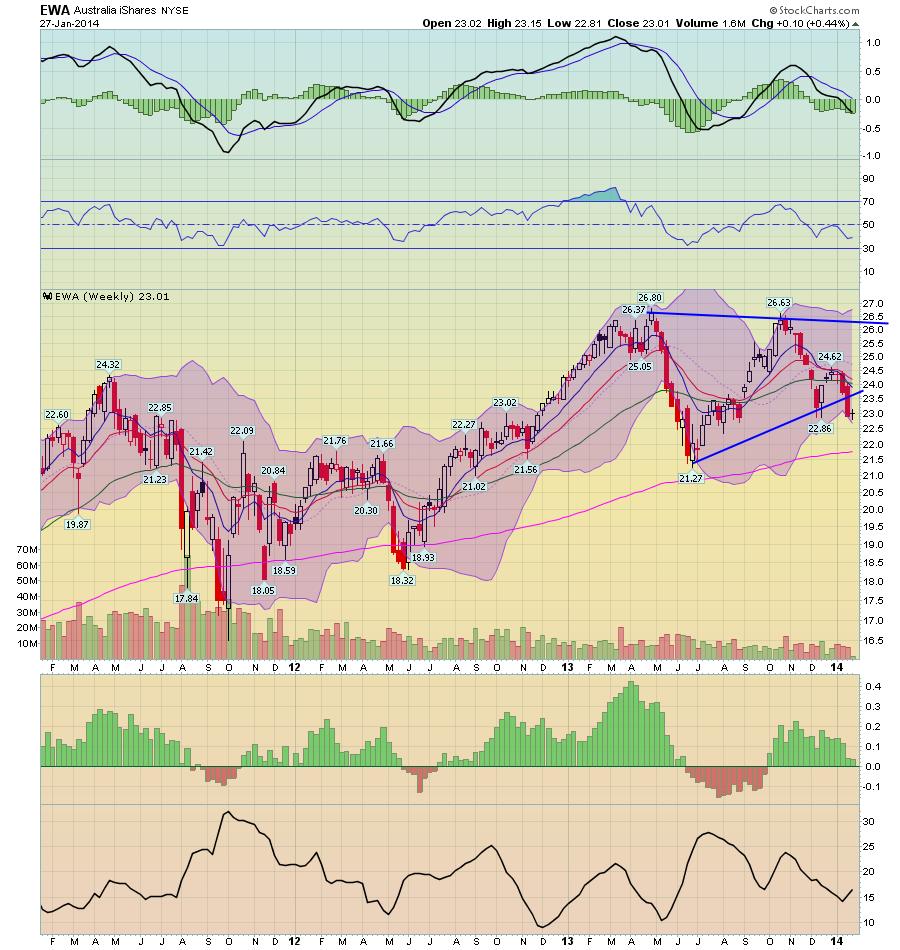 What the Heck is Happening In the Markets?

The International Sell-Off In Perspective

As we start this week, we should look at the price action from the end of last week, as this will have a strong impact for the next few tradings days. The all Asia except Japan ETF had been trading between 57/57.5 and the lower 61s.  Last week we saw a sharp sell-off as prices broke through the 57.5 level by printing two strong down-day bars.  Also note that prices moved through the 200 day EMA.  The only thing lacking from this sell-off was a huge volume spike. But this could mean the big volume spike is yet to come. 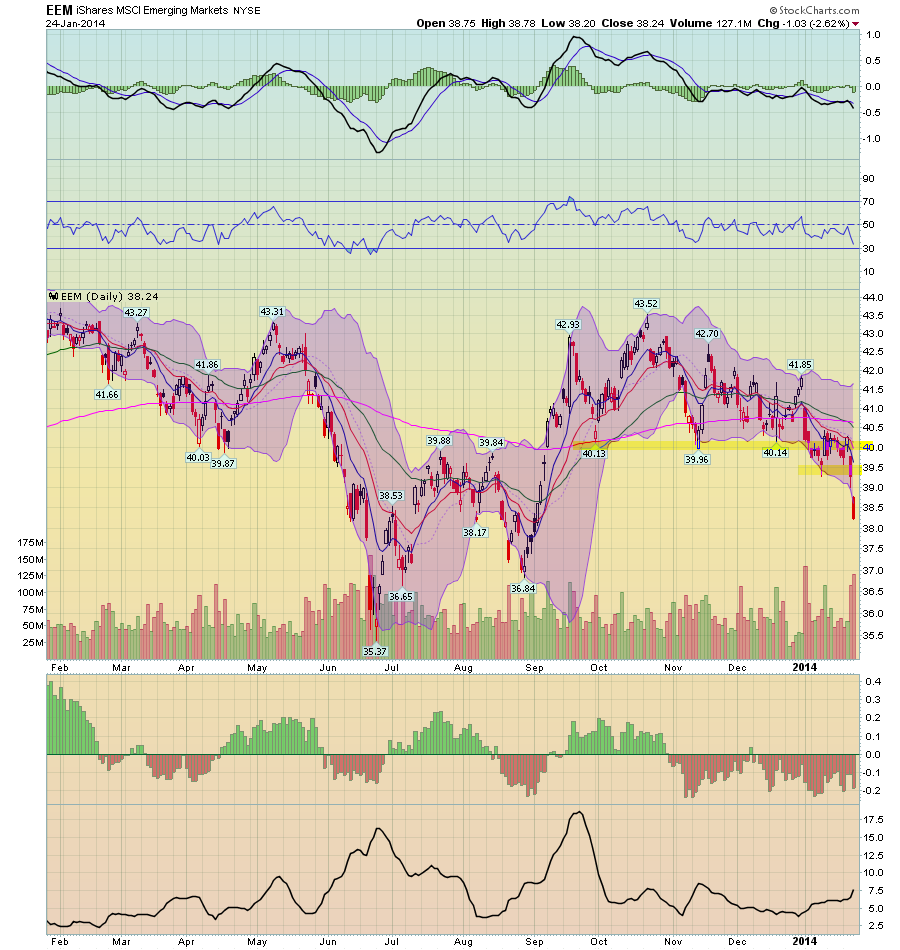