My Weekly Indicators post is up at XE.com.  The year 2017 is ending in a very positive fashion.

The Doomers have been almost completely silent.  This means I must begin to compile a list of things that I can start to worry about ....

In which I mark my forecast for 2017 to market

At the beginning of each year, I fearlessly forecast the economy over the ensuing 12 months.

So, how did I do one year ago with my forecasts for the first and second half of 2017?

First of all, let's all remember that Powerline has the worst record when it comes to discussing economics.  As I pointed out several years ago, they spent an entire year getting literally everything wrong.

So, they're now at it again over the latest changes to the tax code from the Republicans in Congress.  There's just one problem: there is actually little correlation between tax rates and growth.  "But the economy grew after the Reagan tax cuts!" you respond.  Actually, cutting interest rates (again, econ 101 here) had a little more to do with that than you think.  And then there's this:

This chart that shows the highest marginal tax rate (in blue, left scale) and the Y/Y percentage change in GDP growth (in red, right scale).  Notice that the red peaks are in fact higher when taxes are higher, completely contradicting Powerline's argument.

And then there's this little scatter plot from Jared Bernstein (someone who has actually studied economics): 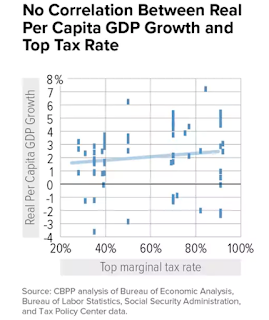 There is no statistical correlation between tax rates and per capita GDP growth.

Now, this analysis involves data, facts, and math -- three areas where all the Powerline contributors are deficient.  Also remember they're political sycophants -- if the Republican party said, "The sky is now pink," all the guys at Powerline would dutifully write, "The sky is pink."  In other words, it will go over their heads.  And even if they (or their readers) could understand it, they wouldn't listen because it runs against Republican orthodoxy.

But for those of us who still use data, facts, and statistical analysis, it should be helpful.

At the beginning of the year, I identified 5 trends that bore particular watching, primarily as potentially setting the stage for a recession in 2018. Now that the year is ending, how did they turn out?
#5 Gas Prices
One potential pressure point on the economy was gas prices, which appear to have made a long- bottom in January of 2016. As they began to rise, consumer inflation has increased from non-existent to almost 3%. So the issue was, will they rise even further and drive inflation even higher?
Typically it has taken a 40% YoY increase in gas prices to shock the consumer.  Gas price increases did briefly approach that point early in the year, but then, with the exception of a brief spike after the Texas hurricane, they retreated. They are only a little higher YoY now:

There's no pressure on customer's wallets at all from gas prices.

#4 The US$
Another potential pressure point on the economy in 2015 was a big increase in the relative value of the US$, which was part of the shallow industrial recession of 2015.  The $ started to rise again after the November election.  Here too the data has calmed down again, and indeed gone the other way:

Residential contruction spending is a very smooth, un-noisy series, but it does lag permits and starts by a few months,. Note that typically it has taken a big change in mortgage rates about 9 to 12 months to feed through into residential contructioni spending. so we are probably at about peak impact now.  This isn't going to roll over either.

#2 The Fed Funds  rate vs. consumer inflation
If consumer inflation rose past the magic 2% Fed target, would the Fed chase it?  Apparently it didn't matter. Inflation briefly did spike close to 3% YoY due to the increase in gas prices early this year, and the Fed duly hiked.  But it hiked again even after consumer inflation fell back down under 2%, which increasingly looks like a real ceiling in the Fed's calculations:

The yield curve has begun to compress, but it is still positive. Still, it will be difficult to avoid an inversion in interest rates should the Fed stay on its current course with several more hikes.
#1 Real retail sales vs. real average hourly earnings
The final graph came  from my "alternate" recession forecasting model which turns on consumers running out of options to to continue increasing purchases (i.e., no interest rate financing, no wage real wage increases, and no increasing assets to cash in). The long term relationship has been that sales lead jobs, and jobs lead nominal wage increases, but real sales vs. wages are somewhat more nuanced. In the inflationary era, through the early 1990s, YoY wareal wage growth actually slightly led sales. In the deflationary era that dates from the alter 1990s, if anything the two are a mirror image, but in every case but 2001 (where real wage growth just decelerated rather than declined), both have been negative going into recessions. The below graph shows the last 20 years::

I would expect to see both sales and wages stall out before the onset of the next recession. Wage growth has weakened in recent months, and wage growth is now barely above zero. Meanwhile consumer spending has increased YoY, as the personal savings rate has decreased by about 1% in the past year.  While consumers are incresingly vulnerable to any inflationary shock, none has happened yet.

This  has been "the little expansion that could," dodging bullet after bullet in the 8 1/2 years since it started.  If it continues another 15 months or so, it will become the longest expansion in history. None of the potential concerns from 12 months ago have come to fruition.

Next week we'll start looking at five noteworthy graphs for 2018.
Posted by New Deal democrat at 8:00:00 AM

My Columns Are Up at XE.com

The US economy ends the year on a high note
Posted by Hale "Bonddad" Stewart at 7:42:00 AM