Weekly Indicators for January 4 - 8 at XE.com

Coincident indicators are at recessionary levels, but there is some interesting action happening at the margins, suggesting a turning or inflection point may be forming.
Posted by New Deal democrat at 8:46:00 AM

Five graphs for 2016: #1, underemployment and wages

This is the final installment of my 5 graphs to watch in 2016.  Previously I have described:

The single worst part of this economic expansion has been its pathetic record for wage increases. Nominal YoY wage increases for nonsupervisory workers were generally about 4% in the 1990s, and even in the latter part of the early 2000s expansion.  In this expansion, however, nominal increases have averaged a pitiful 2%, meaning that even a mild uptick in inflation is enough to cause a real decrease in middle and working class purchasing power.  This is shown in red in the graph below: 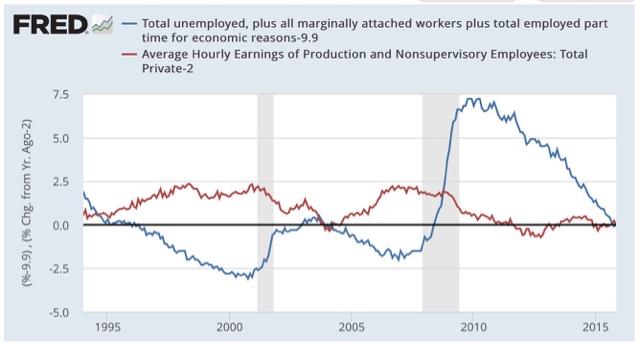 There is increasing consensus that the primary reason for this miserable situation has been the persistent huge percentage of those who are either unemployed or underemployed, such as involuntary part time workers. This expanded "U6" unemployment rate is shown in blue in the graph above.

In the above graph, both YoY nominal wage growth and the U6 underemployment rate are normed to their most recent values from the November employment report.

In the 1990s and 2000s, once the U6 underemployment rate fell under 10%, nominal wage growth started to accelerate.  If the economic expansion continues, the U6 unemployment rate should continue to decline, and I would expect to see increasing wage growth.

I am especially fearful that poor wage growth now may mean actual wage deflation - for the first time since the 1930s - when inevitably the next recession occurs.  This is thus the most crucial graph of all, and it is the #1 graph to watch in 2016.
Posted by New Deal democrat at 12:15:00 PM

The more leading numbers in the report tell us about where the economy is likely to be a few months from now. These were generally positive.

This was a solid report with just a few blemishes. Job increases were across the board, even in manufacturing.  Average wages were up, and are now up +2.4% YoY, the best in several years.  Aggregate hours and wages increased solidly. Revisions were positive.

The blemishes were sideways unemployment and participation, the decline in the manufacturing workweek, and the increase in those outside of the labor force who want a job, as well as the deceleration in YoY job growth.

I caution against reading too much into the YoY wage increase, since what really happened is that the miserable -0.6% decline in December 2014 dropped out of the YoY comparison.  The decline in YoY job growth, confirming that we are late in the expansion, together with continued objectively poor underemployment, should be taken as serious issues.  I can't emphasize how much I am worried about outright wage deflation, with all that implies, whenever the next recession hits.
Posted by New Deal democrat at 8:07:00 AM

Number 2 is a carryover from last year.  While 2015 saw a big improvement in involuntary part time employment, which hopefully will continue, the number of those so discouraged that they did not even look for work, even though they want a job, went stubbornly sideways until the last quarter of 2015.  It is still elevated well above its rate in the later part of the 1990s through 2007: 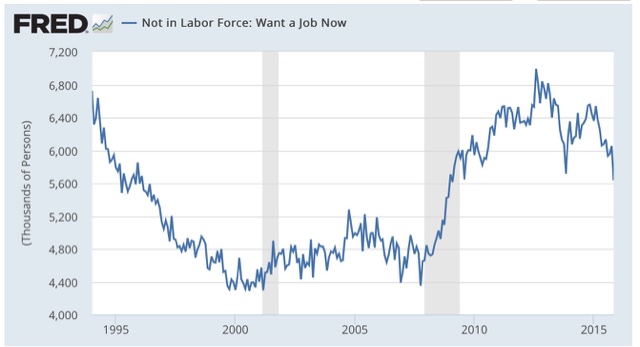 If the economic expansion continues, this number should improve, as more and more of these discouraged workers re-enter the labor force and actively look for, and hopefully find, work.  I would like to see at least 3 months of numbers below 5.2 million before concluding that this number is no longer "poor."
Posted by New Deal democrat at 8:00:00 AM

A brief note on the markets

I am writing this note primarily for our progressive readers who follow us from That Other Place.  With the Chinese stock market tanking again overnight, one thing that is nearly certain is that there will be a collective Doomgasm from the usual suspects.  The ones who dismiss the stock market when it goes up, because it is a casino, stocks are overwhelmingly owned by plutocrats, it's a bubble, blah blah blah; but are in steamy arousal when the market goes down, because this is The Big One!  Is there a legitimate basis for concern?

My sense of the current volatility is that it is similar to last August.  China is unwinding, in somewhat amateurish fashion, a stock bubble, as prices on the Shanghai Exchange more than doubled between late 2014 and early 2015:

That unwinding almost always leads for forced selling, as those who have been caught on the wrong side of stock price movements have to sell to cover their bets.  They will "sell their winners," i.e., assets which are more liquid and less affected -- the perfect example of which are US stocks.  In August, this selling reached a crescendo with a 15 minute 1000 point drop in the Dow that caused astute domestic traders to back up the proverbial truck and buy.  The best gauge of this better informed local investor is to watch corporate insiders.  Here's what they've been doing in the last year: 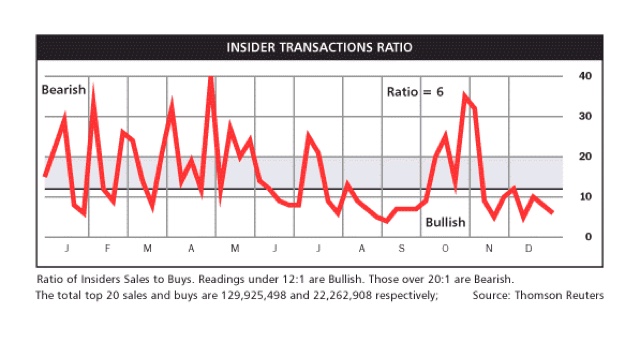 In case it hasn't already leapt out at you, it is nearly a mirror image of the Shanghai index over the same period.  As of the most recent week, US corporate insiders are very bullish on their own companies' stocks - just as they were during the brief August downturn.

So can we have another big mini-crash like we had last August?  Sure.  Does it mean the US economy is sinking under the waves?  Almost certainly not.

That being said, the US economy is holding its own, but it has taken on some water in the form of a shallow industrial recession, that is partly the OIl patch, and partly the due to the huge strengthening of the US$, harming exports and making imports more competitive.  [NOTE: the decline in gas prices is a net boon to the US. But this time it was accompanied by a surge in the $, which has had the larger effect.]

The biggest danger from China is that it aggressively devalues the Yuan against the US$. causing another upward surge in the dollar's trade weighted value.  At some point a hyper-strong dollar would affect manufacturing so badly that it can outweigh the still-positive US services economy, as shown in yesterday's ISM non-manufacturing index.  But we are not there yet, and it is far from certain that we get there.

This is the third installment of 5 graphs to watch in 2016.  The first two were:
One consequence of the recently strong US$ has been a shallow industrial recession.  This is been accompanied by a relative buildup in inventories compared with sales: 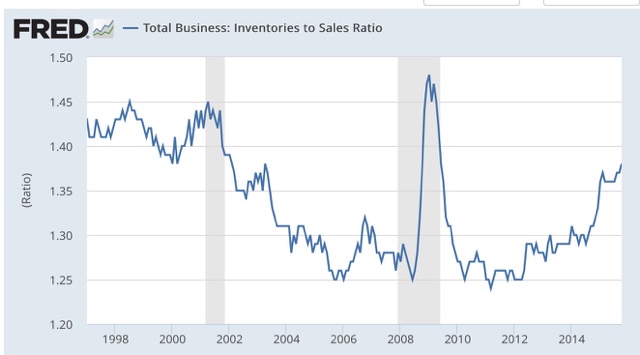 The current level of the inventory to sales ratio has sometimes but not always indicated a recession.

I plan on looking at this ratio decomposed into its two components:  sales (blue) vs. inventories (red): 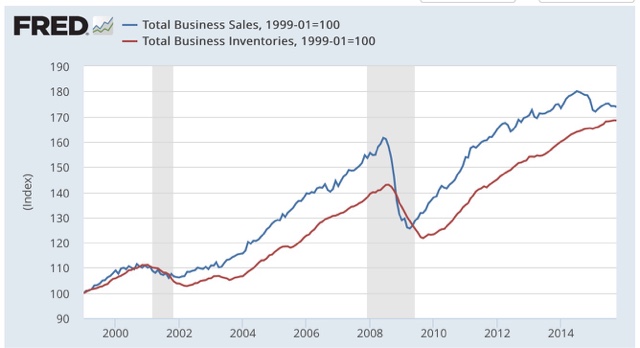 This is because sales peak/trough first, and inventories catch up with a lag.  For the last few months, inventories have gone sideways, even as sales have continued to slide.  In order for the buildup to be liquidated, inventories must turn down.  That will most likely be accomplished by a significant cutback in production - with nasty consequences for some important economic numbers like employment (but not necessarily a downturn vs. a slowdown).

So I will be watching for two things: (1) a downturn in inventories, indicating the liquidation is underway; and (2) a bottoming of sales, indicating the inventory correction is over.
Posted by New Deal democrat at 8:00:00 AM

An important look at corporate profits

But even if you don't particularly care about stock prices, if you care at all about social equity, then a look at corporate profits as a share of GDP is, well, breath-taking.
Posted by New Deal democrat at 12:15:00 PM

This is the second of 5 graphs to watch in 2016.  Yesterday I wrote about the yield curve.

The big story of last year was the impact of the super-strong US$, which rose 20% against some major trading partners between July 2014 and February 2015, generally trending more sideways since: 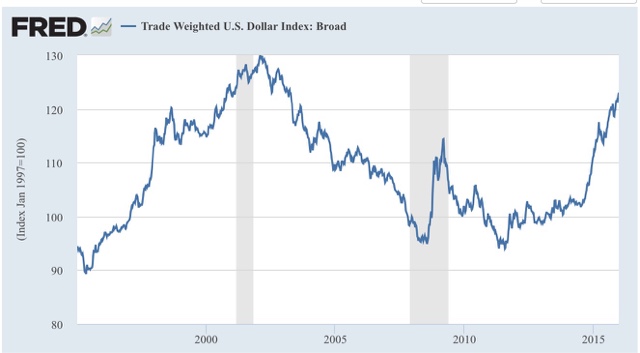 The result was a downturn in industrial production, creating a shallow industrial recession, which to date has been overbalanced by a continuing expansion in the domestic US consumer-driven economy, led by housing and cars.

Has the strengthening of the US$ run its course? Or will tightening by the Fed drive the value of the US$ even higher, perhaps enough to overcome the service sector? 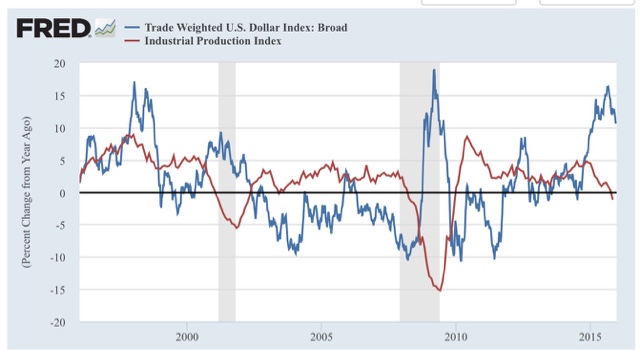 Every year there are certain aspects of the economy that particularly bear watching.  This week I will illustrate 5 graphs that describe particular issues facing the economy that are unusually important at this time.  Several of these will be carryovers from last year, but most will be new.

Now that the Fed has not just committed itself to raising rates, but started the process, with an apparent goal of setting short term rates ultimately at 2% or higher, the yield curve - the difference between short term interest rates and long term rates - takes on more importance, particularly since long term rates are already very low.

An inverted yield curve has been a nearly flawless harbinger of recession, with its only miss in the last 50 years being the slowdown-but-not-quite-recession of 1966.  The yield curve also inverted in 1928.  A flat yield curve conveys at least a slowdown, as was the case in 1994. The yield curve was also very briefly flat in 1930.  Please note that a positively sloping yield curve in a deflationary era does not necessarily mean expansion, as there was no inversion between 1930 and 1954.

Here is the detailed graph covering the last 30 years: 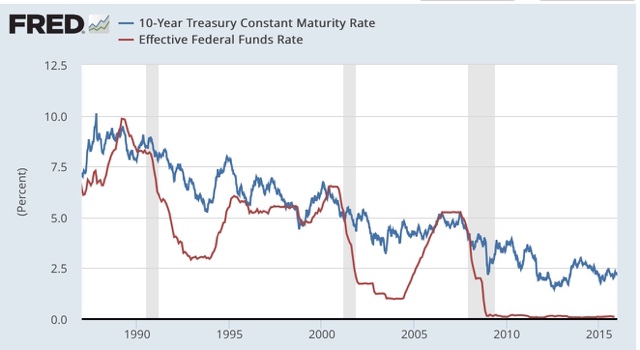 Typically as the Fed has raised the Fed funds rate, longer term rates have also risen at a slower pace -- up to a point. Under current conditions, the Fed risks inverting the yield curve if long rates do not increases.  But a large increase of, say, 2% in long rates will also choke off the expansion, as things like increased mortgage costs strangle the important housing market.  So the Fed must steer a path between Scylla and Charybdis.  The above graph will show how they are doing.
Posted by New Deal democrat at 8:00:00 AM

Weekly Review of US Bond, US Equity and International Economic Numers

These are over at XE.com

International
Posted by Unknown at 7:42:00 AM