Weekly Indicators for April 20 -24 at XE.com

Looks like good news on consumers, but bad news seeping into hiring.
Posted by New Deal democrat at 7:55:00 AM

The trend in the US housing market is of slow improvement.
Posted by New Deal democrat at 10:35:00 AM

At the end of last year, I highlighted 5 graphs to watch in 2015.  Now that we have all of the reports for the first three manoths, let's take another look.

After a mini-surge at the end of January (light brown in the graph below), refinancing applications fell back to somnolence during February due to a rise in mortgage rates.  Refinancing recovered a little in March as rates retreated, but not so low as in January.  Mortgage News Daily has the graph: 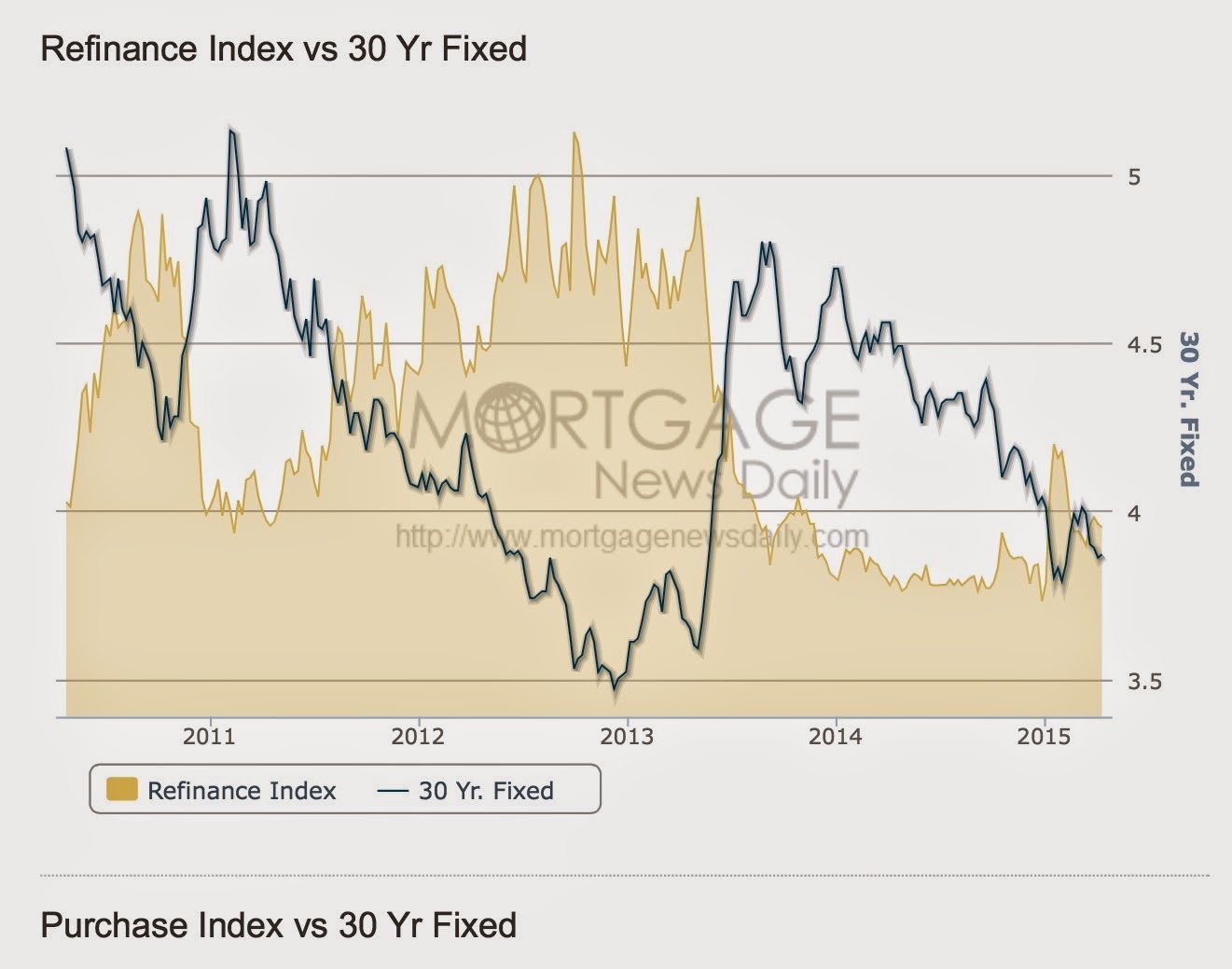 Over the last 35 years, refinancing debt at lower rates has been an important middle/working class strategy.  There is little room left for that strategy.  If mortgage refinancing stays turned off too long, and wages don't grow in real terms, then consumer spending falters and so does the economy.

Here is a graph of gas prices (blue) compared with nominal average hourly wages (red) since the bottom in prices in 1999: 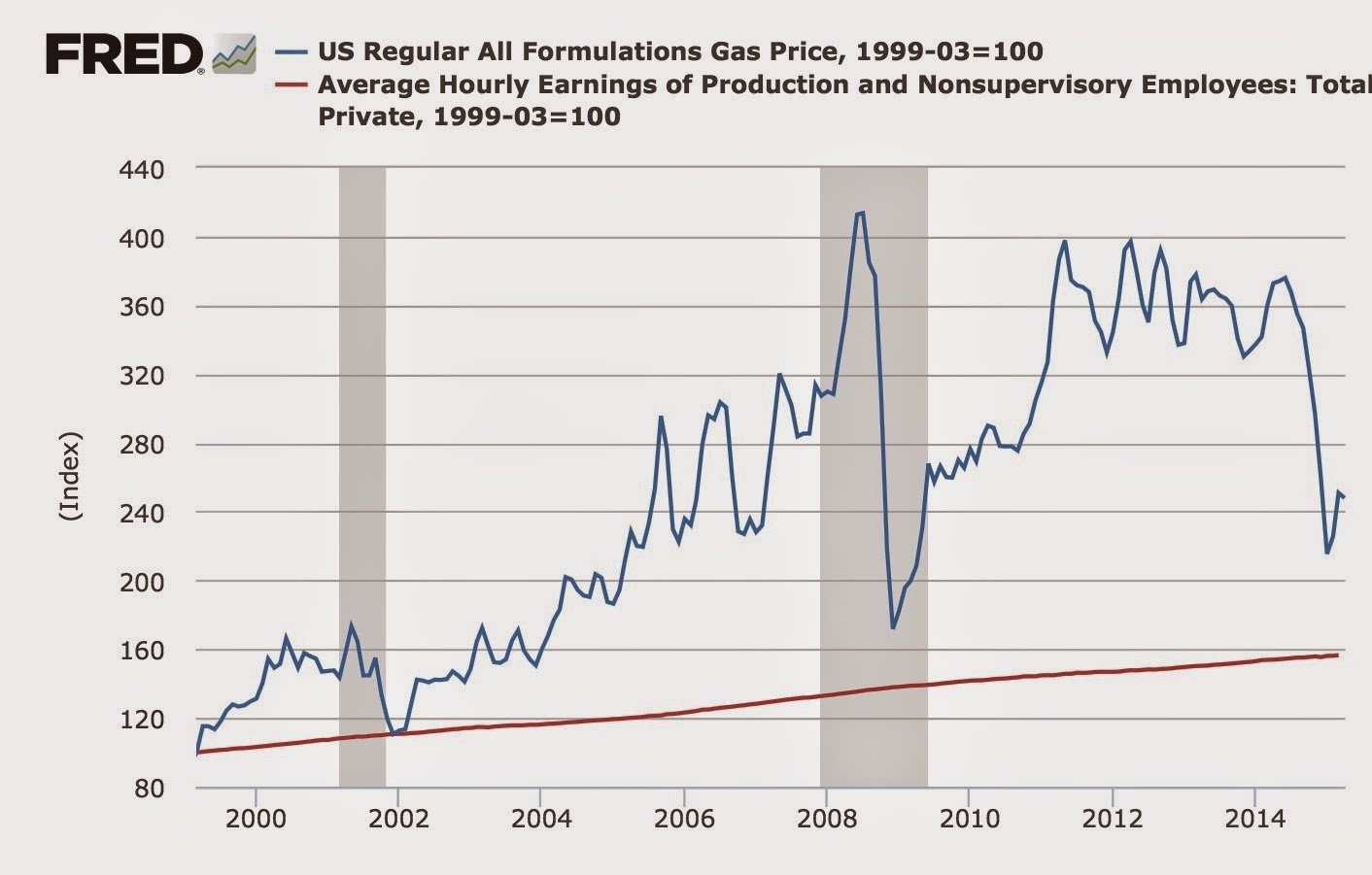 How long must a worker labor in order to buy a gallon of gas?  After skyrocketing in the lead-up to the Great Recession, gas prices collapsed, helping the consumer start to spend again on other things at the bottom of that recession.  The recent collapse in gas prices took us almost all the way back to that bottom.  Just as in 1986 and 2006, at first consumers saved the money, but once they loosen their pursestrings this will be a strong tailwind to the economy.

Next is a graph of part time workers for economic reasons expressed as a percentage of the labor force.  In the first quarter, this continued to improve: 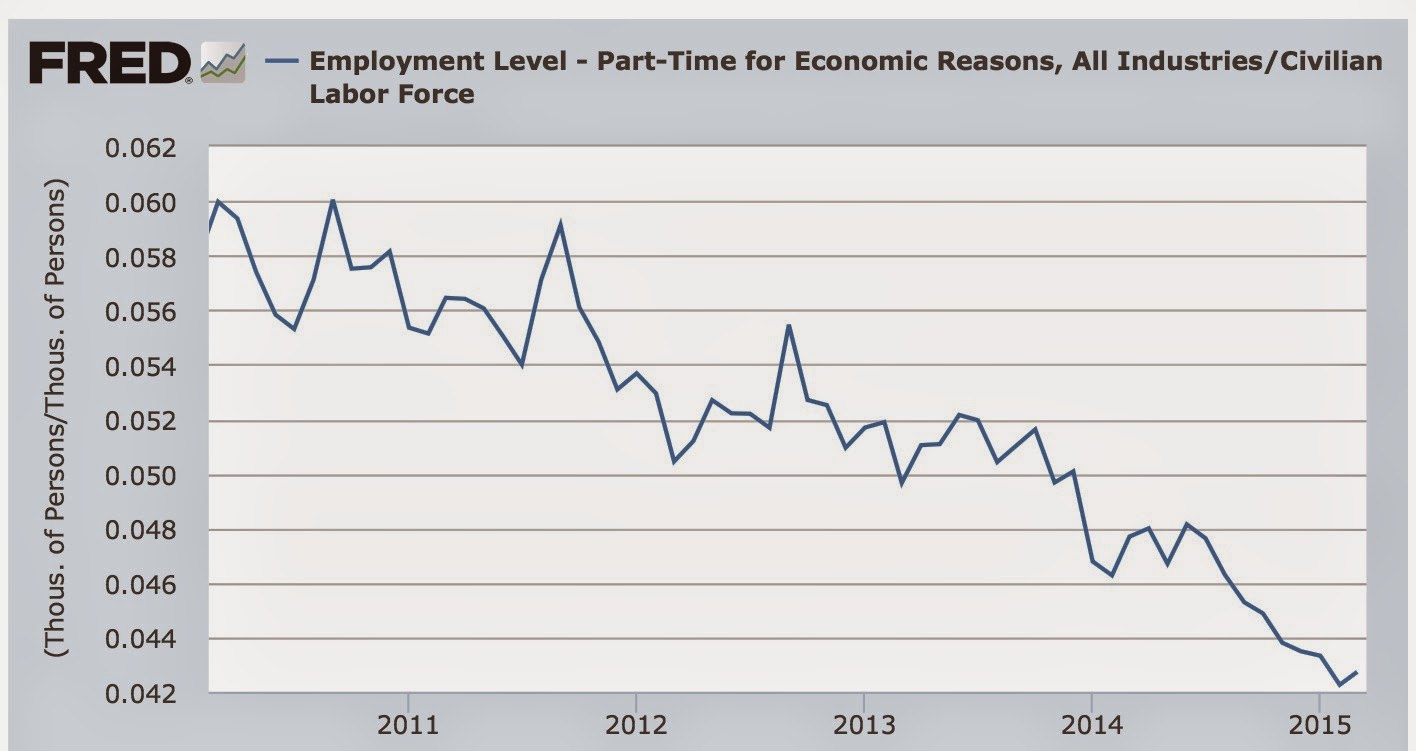 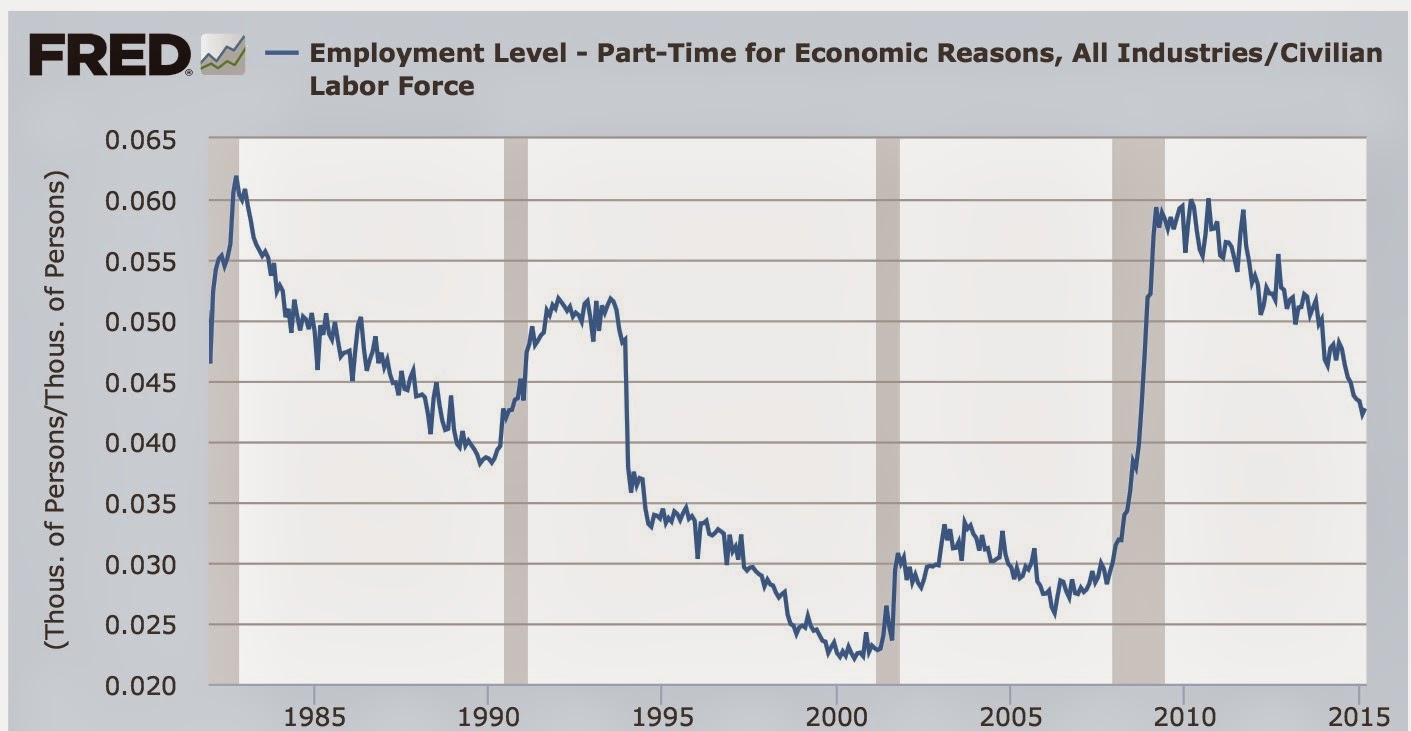 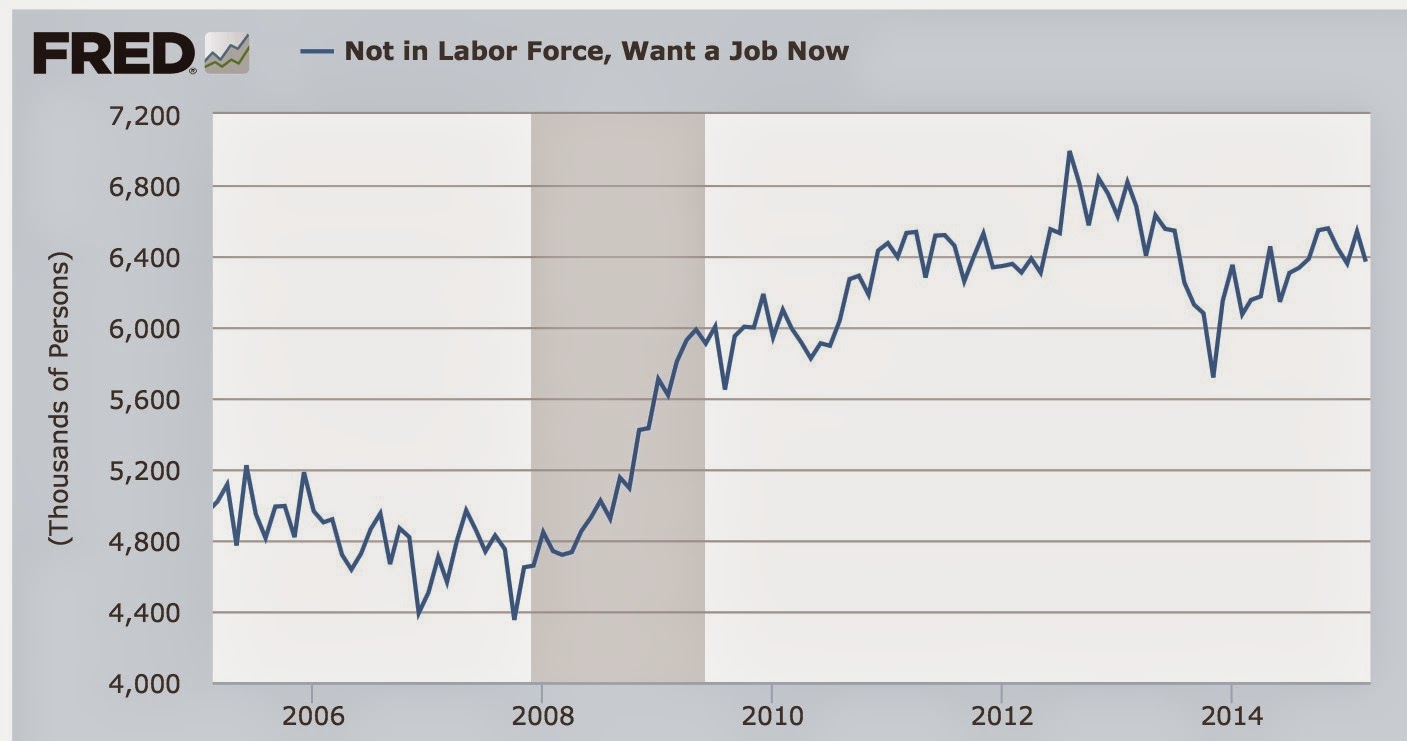 This moved generally sideways during the first quarter, going down by only -56,000 from 6.445 million in December.  It is now almost 700,000 above its post-recession low of November 2013 (just prior to Congress's cutoff of extended unemployment benefits) and more than 2 million above its 1999 and 2007 lows.

After an anomalous decline in average hourly wages in December, and a big positive reversal in January, wages for nonsupervisory workers were totally flat in February, and then increased again in March. 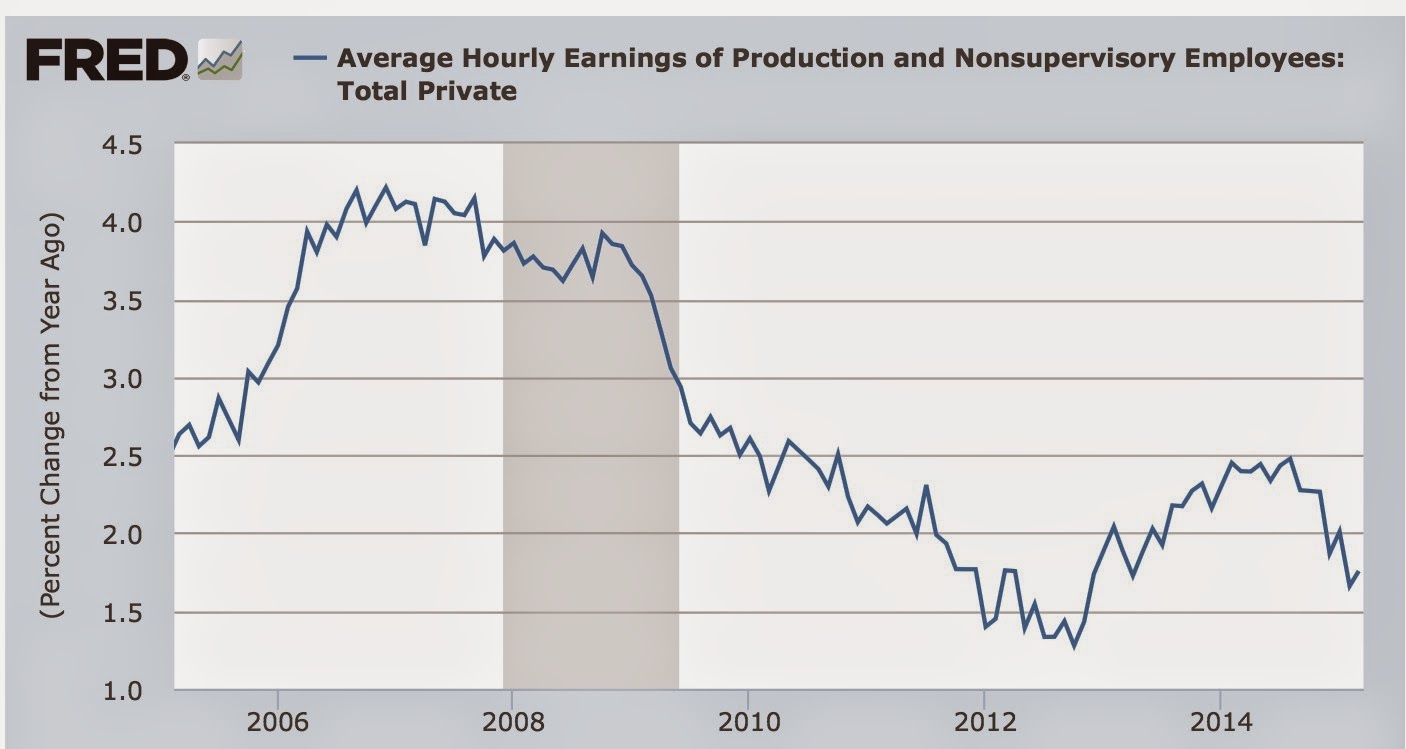 After increasing in 2013 and the first half of 2014, in the last 7 months nominal wage growth YoY declined back to its post-recession low.  Needless to say, this decline is  troubling.

Compare our present expansion with the previous three.  In the 1980s and 2000s, by the time we improved to 5.5% unemployment, nominal wage growth was approaching 3% YoY.  In the 1990s expansion, at worst wage growth was on the cusp of acceleration, but was nevertheless 3.5%. Unless wage growth starts to accelerate now, the pattern is not holding.

In summary, three months of data into the year shows two series positive (gas prices, involuntary part time employment), little improvement in two others (refinancing, discouraged dropouts from the labor force), and an actual worsening of one (nominal wage growth).  Should wage growth not improve, and mortgage refinancing remain dormant, we are going to run into trouble, and I will be looking for other long leading indicators to start rolling over, perhaps in the latter part of this year.

Yes, China's Market Is In a Bubble, and No, It Won't End Well

Update on sales, housing, and employment: February was weather, March was the OIl patch

(First of all, sorry for the lack of posting.  Real life has been busy, the economy not so much.)

As we all know, there has been a run of weak data for the last several months.  In previous posts, I've suggested that February's poor retail sales were due to weather, while March's poor employment report was due to Oil patch weakness.  Since some new state-level data has been published, I can update these notes.

Let me take the last first.  The state-by-state breakdown of employment and unemployment for March was reported the other day. So, how did the northeast, and in particular Massachusetts fare, vs. the Oil patch states of Texas and Oklahoma?  The following charts cut to the chase. 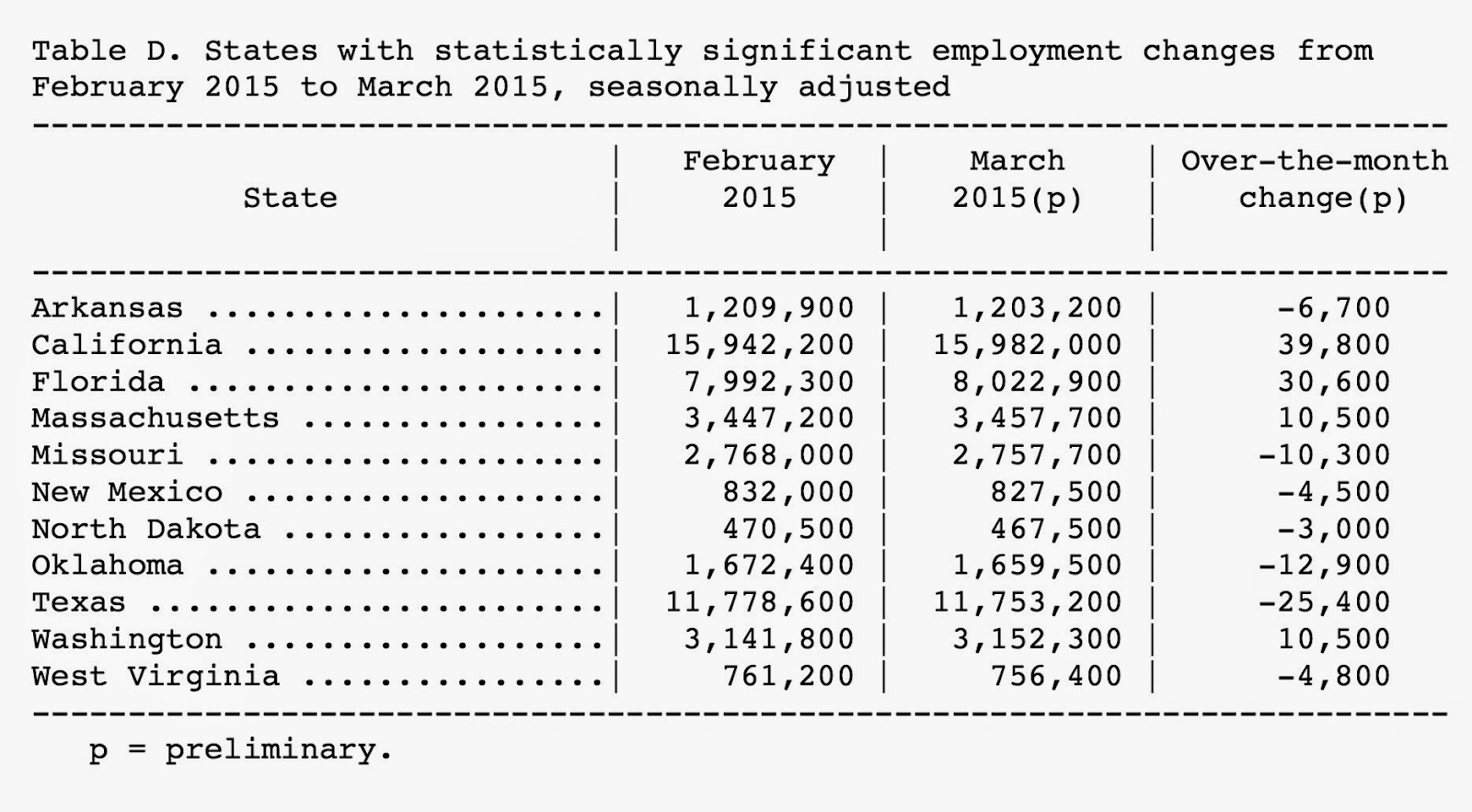 Note that Massachusetts was one of the big winners for employment growth in March.  And the Oil patch states of Texas and Oklahoma among the big losers.

Here is employment changes by region: 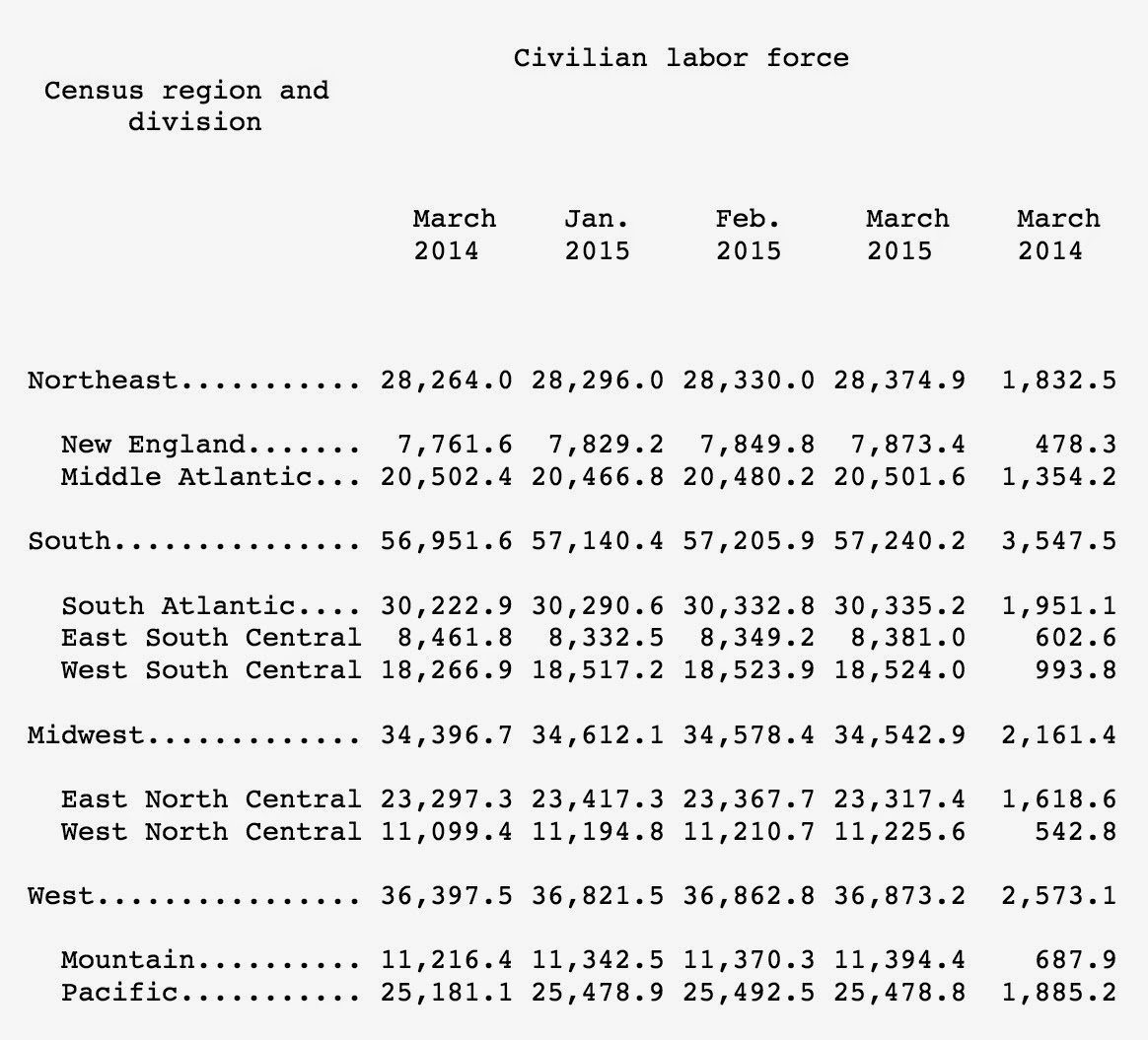 Note that the Northeast was the big winner in March, with growth of 44,900. The Midwest, especially the eastern part, where there has been a big growth in fracking,  and the Pacific portion of the West were the big losers, down -50,300 and -13,700, respectively. 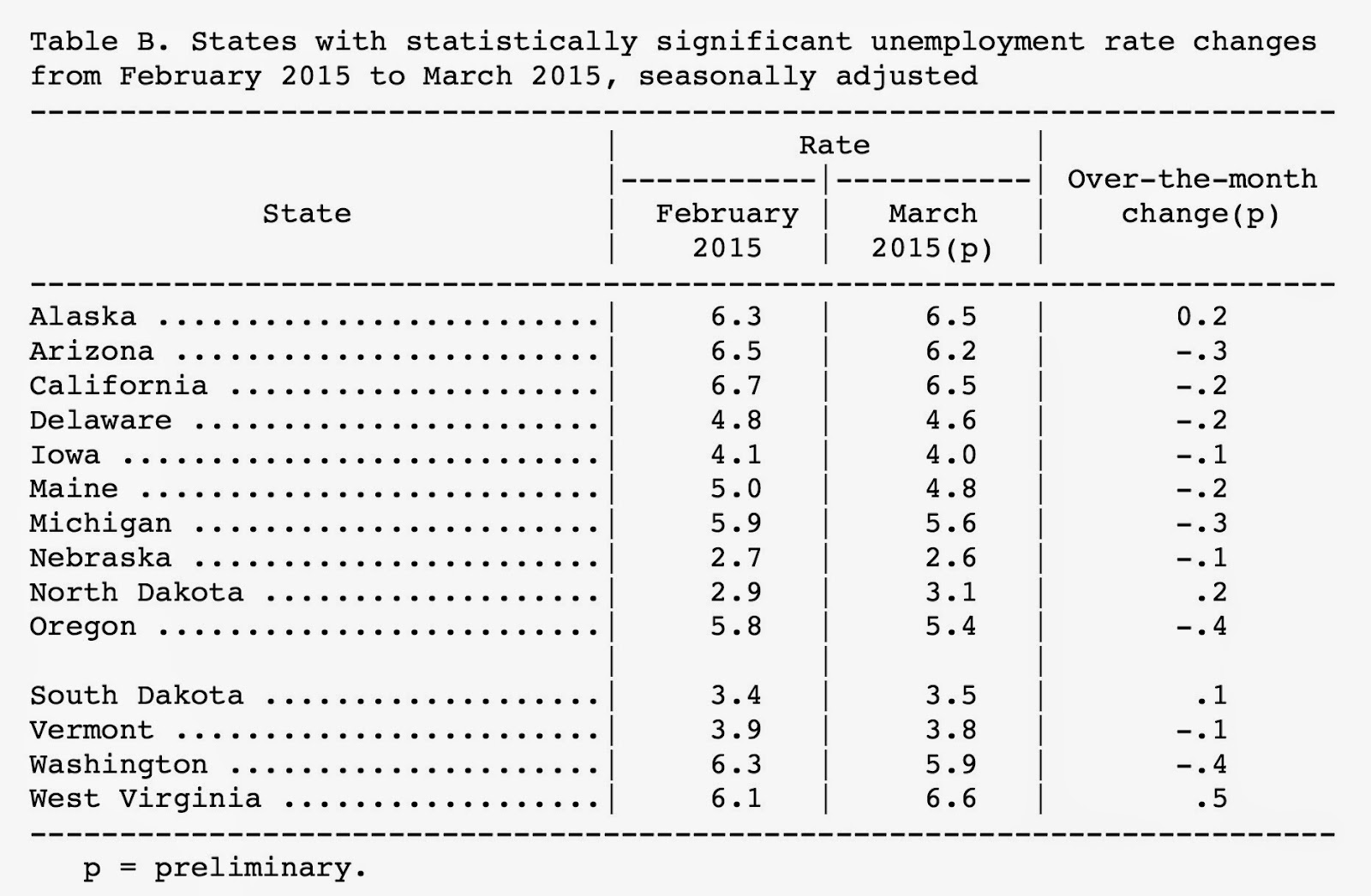 While none of our big states made the list, the new Oil patch states of North Dakota and West Virginia did.

Next, let's take a look at housing starts by region.  Here's what happened in the Northeast: 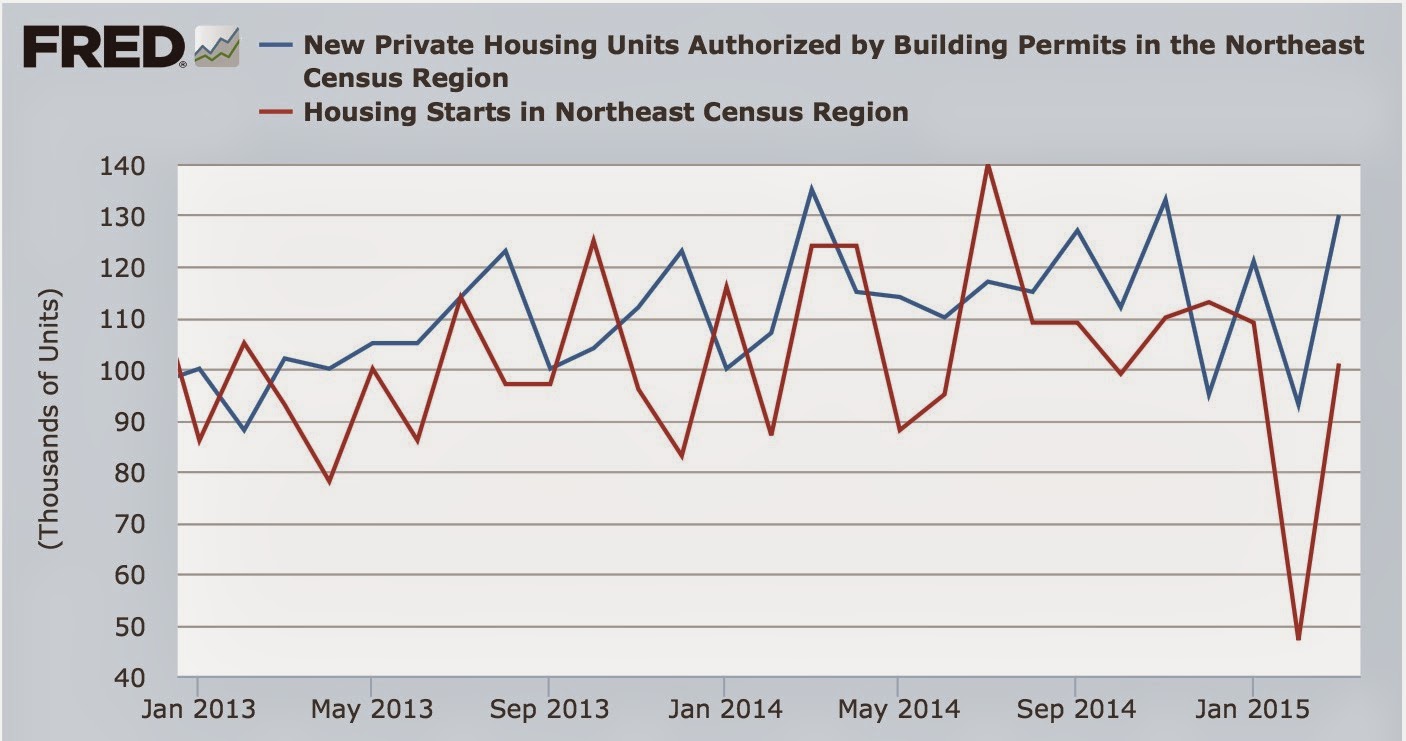 Let's contrast that with housing starts in the Western region: 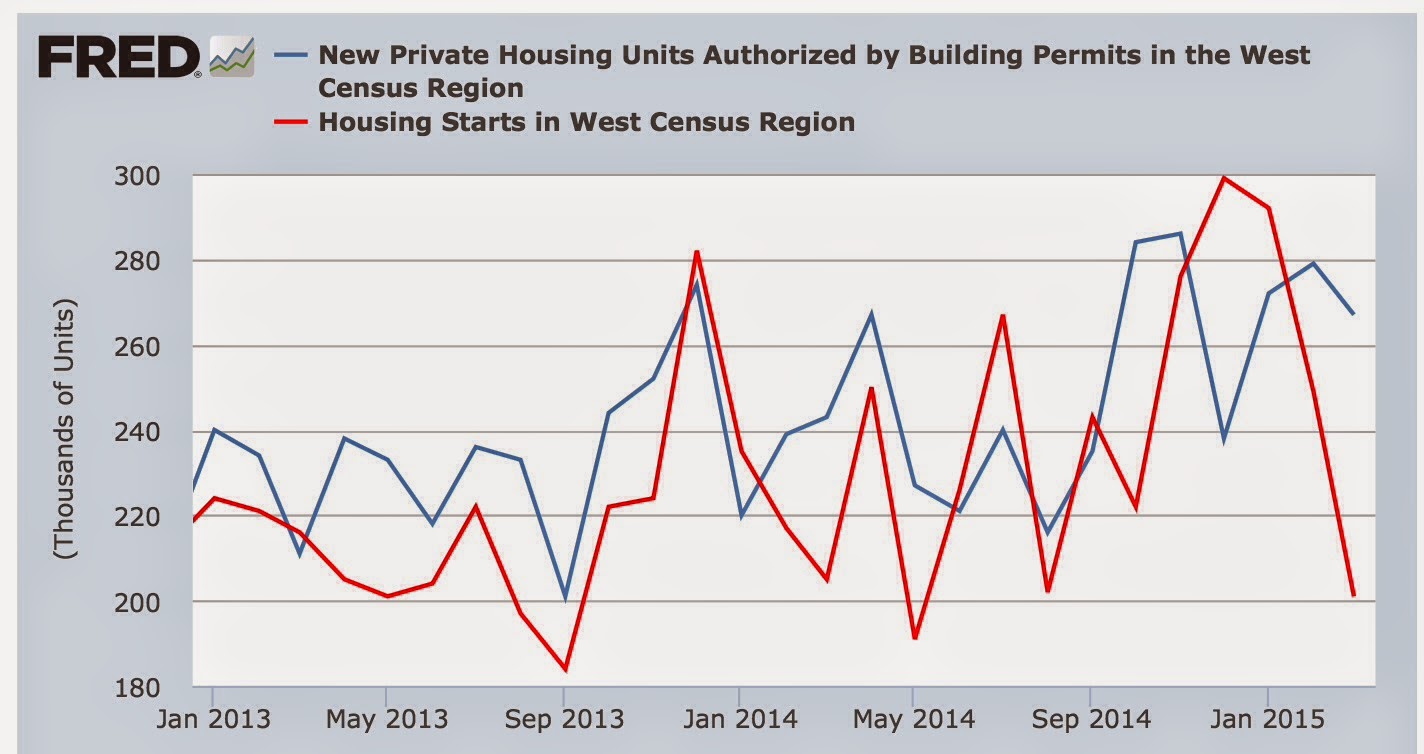 Housing starts cratered in February in the snow-slammed Northeast, and almost completely recovered. Meanwhile starts in the West fell in February, and cliff-dived in March.

Massachusetts was the epicenter of horrible winter weather.  In February Massachusetts reported a paltry +0.2% YoY increase.  In March it reported an actual decline of -0.4% YoY!  Texas had YoY increases of over 11% in January and February.  In March, that fell to +1.5% YoY.

The new data supports that view.  We know that retail sales rebounded somewhat in March.  As I noted last week, Gallup's report of Daily Consumer Spending indicates that in the last several weeks, consumer spending has taken off.  On the other hand, temporary staffing has stalled and is now barely positive YoY, suggesting that the Oil patch weakness continues to hit the economy.
Posted by New Deal democrat at 7:30:00 AM

US Equity And Economic Review For the Week of April 13-17; False Break-Out Edition