Due to a significant decline in interest rates from their recent highs, weekly indicators are generally improving and for the most part have bounced back from their weakness during the federal government shutdown. Click on the link for the full report at XE.com. 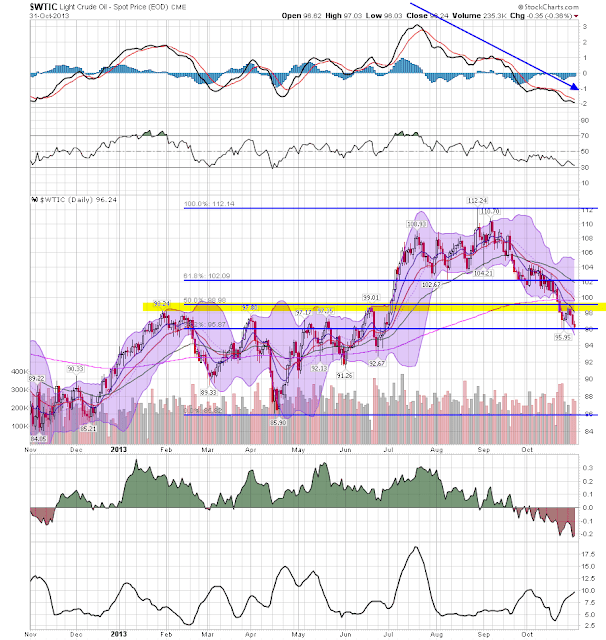 Oil has broken the support level at the 97/98 level and is continuing to move lower.  Prices have moved through the 200 day EMA and are currently resting at the 38.2% Fib level from the mid-April - late August rally.  More importantly, the chart is in a very bearish orientation right now: prices are clearly moving lower, momentum is dropping and volume is flowing out of the market.

This is a very important development for the economy, as the decrease will give consumers more in-pocket income to spend.
Posted by Unknown at 6:40:00 AM

UPDATE: California says this week's number does not include any backlog. The following post describes its large continued impact on last week's number.

Computer issues in California continued to bedevil the weekly initial jobless claims reports through last week's report. In early September, computer issues prevented the Sunshine State from entering all of its initial claims. That ended after a few weeks, but then California had to catch up in its data entry, thus distorting data to the upside. There is a one week delay in reporting state by state data, so this post does not discuss this morning's report.

But get a load of this: last week unadjusted initial jobless claims fell by 49,000 in the other 49 states, but rose by 15,000 in California!

Now , to the nerdy numbers. As I did last year with regard to Superstorm Sandy, we can arrive at a good estimate the "real" initial jobless claims have been, by comparing the unadjusted average for the other 49 states this year vs. last year in the same week, and projecting this year's "real" number by assuming that the percentage of claims in the other 49 states are the same percentage of the total this year as they were last year.For the other 49 states, claims were 83.2% of what they were last year. Since last year, seasonally adjusted, there were 372,000 claims, if California behaved similarly the 50 state number this year last week would have been 309,000.


[Note: Since the raw state data is published with a one week lag, we do not know yet what this week's number will be.]


October 5 and 12 were the two weeks during which federal workers affected by the government shutdown applied for unemployment insurance. In September, California's problems probably resulted in an underount of -53,000 claims by the above calculations. I had hoped that one week ago was the last week affected by California distortions, since cLose to 50,000 of those claims we're made up in the prior two weeks. That obviously wasn't the case, but hopefully this week was the end.
Posted by New Deal democrat at 8:13:00 AM

For the last few months I have been using the change in the price of a gallon of gas to forecast that month's CPI in advance. My point has been, that all you really need to know about inflation is the price of gasoline. So far each prediction has turned out to be within 0.1% of the actual number.

On Monday the E.I.A. reported gas prices for the final week of October, so we can estimate October's inflation rate now. My method is to take the change in the price of a gallon of gas and divide by ten, then add 0.1% to 0.2% to account for core inflation, or else divide by 16 to be more conservative, to arrive at the non-seasonally adjusted inflation rate.

The seasonal adjustment for October last year was +0.2%. This gives us a final seasonally adjusted inflation rate that rounds to -0.2% to 0.0%.

Since my number one concern is jobs and income, it's worth noting that this inflation rate is also subdued enough to suggest that real YoY wages have probably increased again in October (graph below is though September):

For the longest time, the EU was in a recession.  However, over the last few months it appears that the region is slowly pulling out of its economic malaise.  The markets -- acting in their role of leading indicator -- anticipated this improvement as shown by the weekly IEV chart: 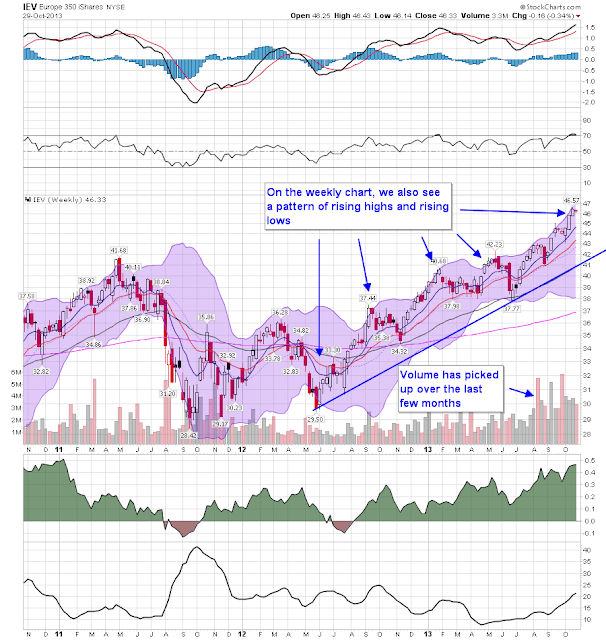 The IEV bottomed in late 2011 and retested its lows about 9 months later in the spring of 2012.  However, since then we've seen a strong rally as prices moved through the 200 week EMA, printing a series of higher highs and higher lows.  Now we see prices above all the EMAs and the greater distance between the shorter and longer EMAs.  Also note the increase in volume over the last few months, indicating a move by investors into this ETF. 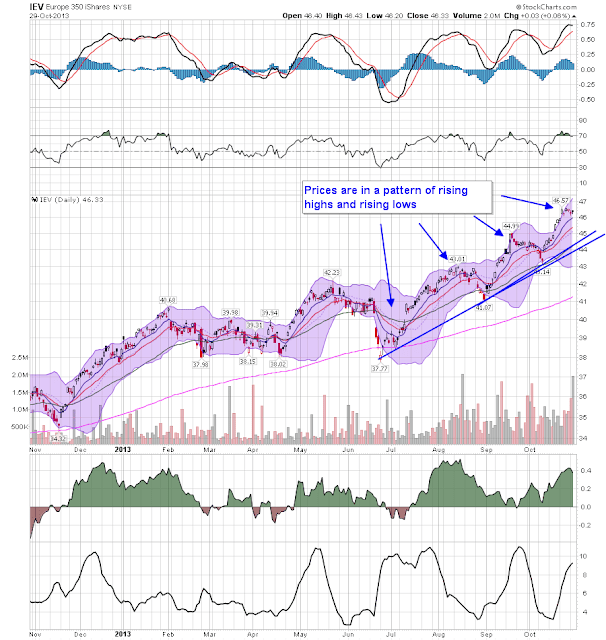 The daily chart shows a strong rally over the last four months, as again prices are printing a series of higher highs and higher lows.  But pay particular attention to the MACD: it may be moving to give us a sell signal -- or at least a signal not to make a move into the market just yet.
Posted by Unknown at 7:00:00 AM

While most of the commodity world is decidedly bearish, cattle is rallying.  Let's start with the weekly chart: 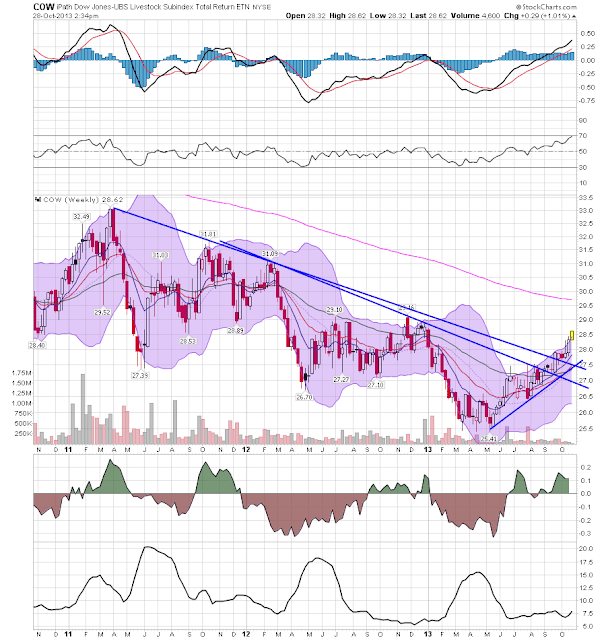 Cattle was in a downward trend for most of the last two years.  But recently, prices have broken through resistance and moved above the shorter EMAs.  Momentum is positive and money is moving into the market. 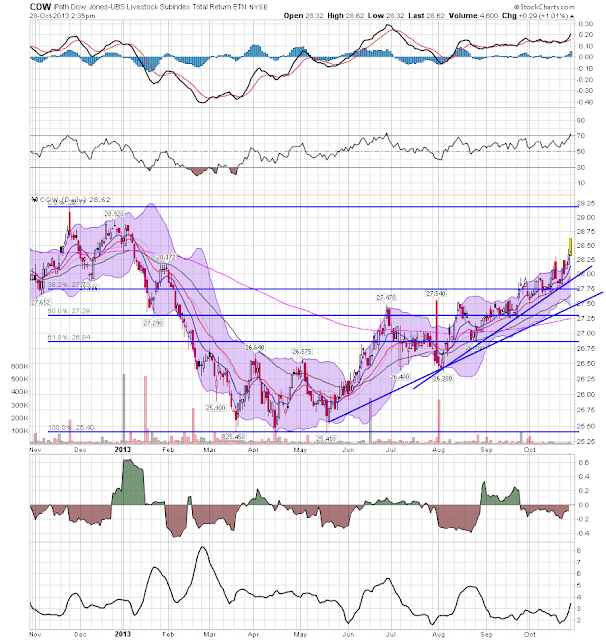 The daily chart shows the rallying in far more detail.  Prices bottomed in mid-May and have been moving higher since.  We see a fair amount of resistance around the 26.75-27.25 area -- which also corresponds to the 200 day EMA.  Once that line was crossed, prices have consistently moved higher.
Posted by Unknown at 6:00:00 AM 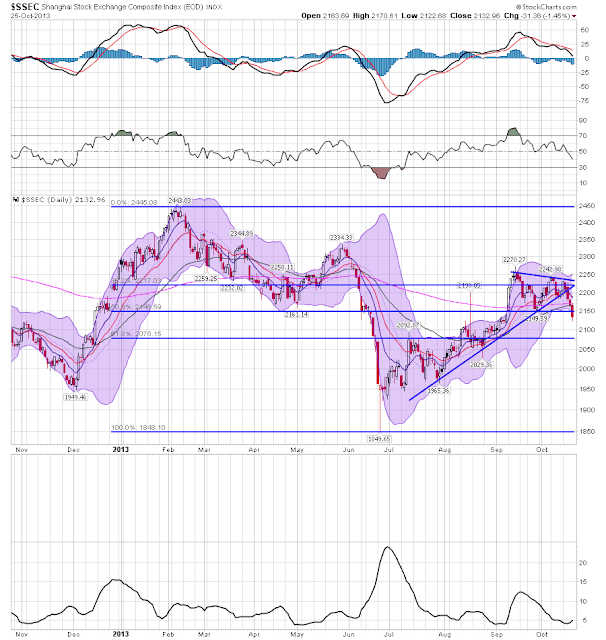 The Chinese market had a sharp sell-off in early June.  Since then, however, we've seen a sustained and very solid rally.  Prices consolidated in a triangle pattern through September and August, with prices using the rally's trend line as the lower line of support.  The MACD was declining during this time, but this is a standard technical development during periods of consolidation.

Last week prices took a major drop, breaking support.  This is occurring right inside a key technical area -- the Fibonacci retracement levels from the early February highs and late September lows.  Adding to the importance of this development is it's occurring around the 200 day EMA.

Two notes for Sunday: on Social Security and XE

It's Sunday, so you know what that means: I get to say whatever I want.

First, a note on XE.com. I know posting has been light here for a couple of weeks, but that has more to do with the government shutdown and lack of data than with Bonddad and me being elsewhere. I expect posting to ramp back up somewhat starting this week.

If you've followed our links over to XE, you know that the format is a little clunky. We can't crosspost in both places, but as we said when we told you we had landed paying gigs, we absolutely want you to be able to follow us, so we've been posting links to make it easy for you. XE intends to improve the format, probably by establishing a separate "blog" header at the top of their home page. They also want to give us more functionality with graphs and hyperlinks. It's a work in progress, and it should improve over the next few months. And, by the way, in case you didn't click over yet, in this week's "Weekly Indicators" column we find out that somebody on the President's Council of Economic Advisors apparently knows of or reads the column, because they adopted an almost identical format with the same name, "Weekly Indicators," to report data during the government shutdown.

Also, nothing makes me go so berserk as talks of grand bargaining away Social Security. I've been working on a Democrat-only, no GOP compromise desired, no-catfood plan to keep the Social Security trust fund solvent forever - and I do mean, so long as the USA exists. Crucially, it relies on automatic triggers that kick in both if the program is overfunded and underfunded - so, for example, withhholding taxes can automatically go down, and benefits be increased, under this plan. There is never, and I do mean never, a need for further Congressional legislation. The plan takes Social Security off the table not just for Boomers and X'ers, but Millenials -- and the grandchildren of Millenials when that time comes as well.

I had hoped to have the post ready for today, but it's going to take at least one more week. Stay tuned.
Posted by New Deal democrat at 9:24:00 AM