Weekly Indicators for September 14 - 18 at XE.com

My Weekly Indicator post is up at XE.com. There was some fluctuation among the coincident indicators this week, but with the Fed decision, the reaction of interest rates takes center stage.
Posted by New Deal democrat at 8:23:00 AM 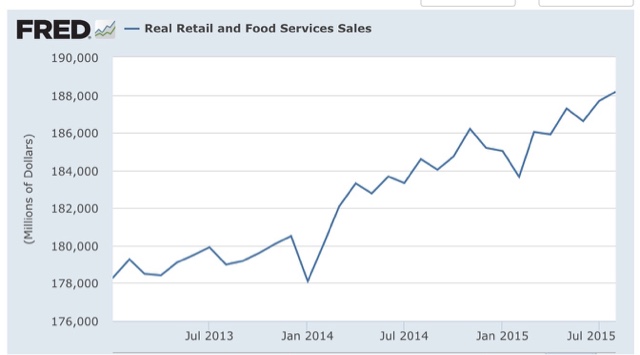 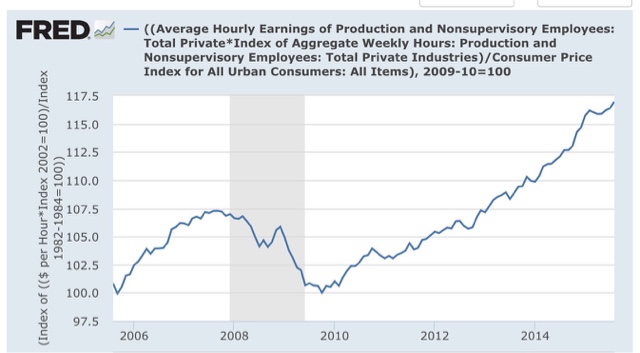 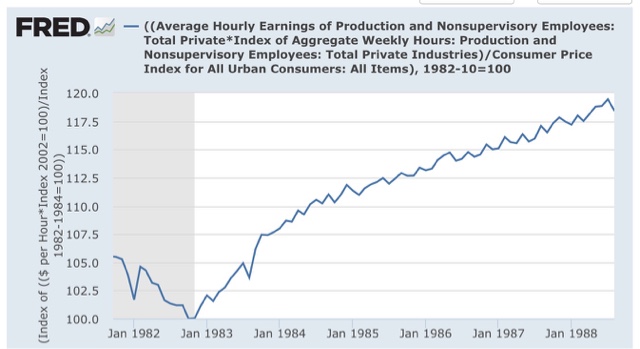 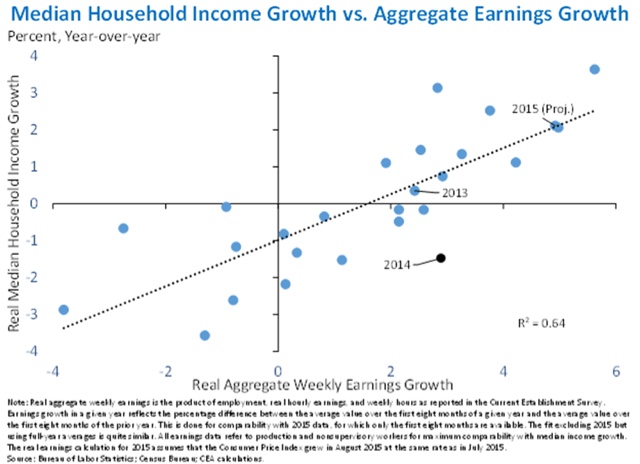 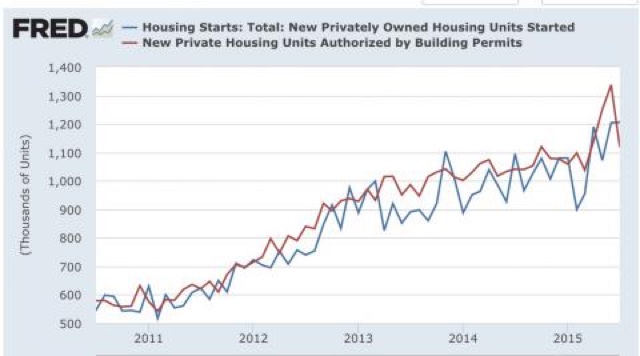 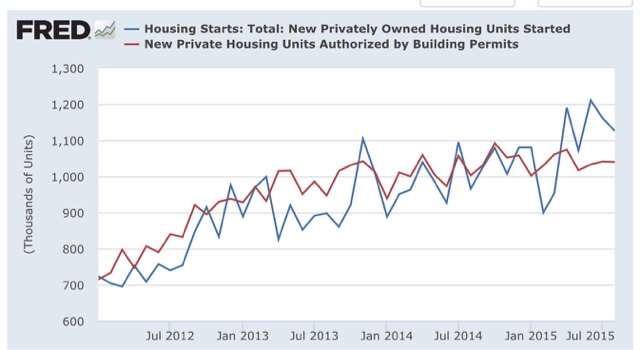 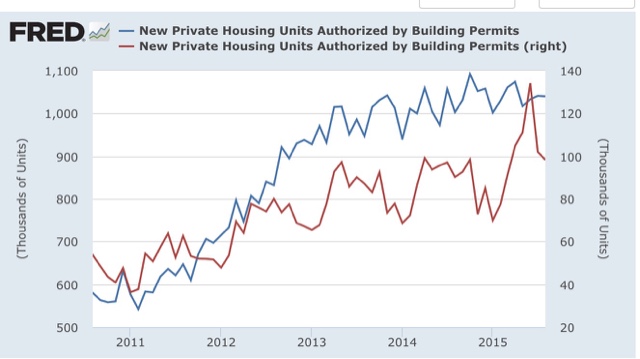 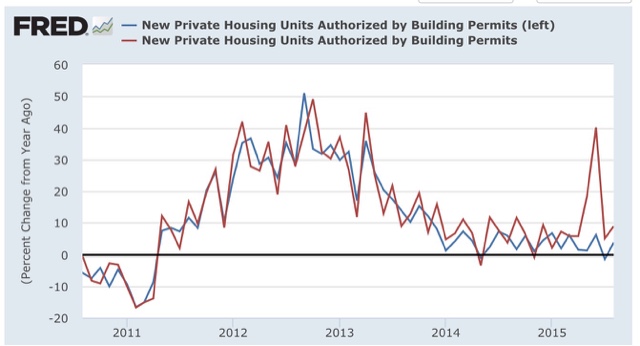 Real life intrudes, so I can't do a detailed analysis now, but this morning the Census Burreau came out with their annual update on median household income for 2014.

That is still a slight overall decline.

As I anticipated, the numbers are the year-long average, not year-end to year-end. Thus, for example, the calculated inflation rate was +1.5%, even though at year end 2014 the CPI was only up about +0.6% YoY. 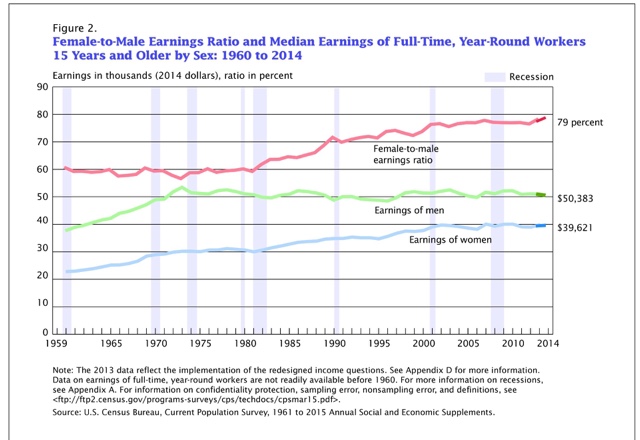 I'll have more later once I am able to take a more detailed look.  Overall this certainly looks like a disappointment.

UPDATE:  According to Reuters:


Edward Welniak, chief of income statistics for the Census Bureau's housing and household economic branch, attributed the leveling of median income in part to a 1.2 million increase last year in non-family households, which typically have much lower income than family households.
"What we see there then is this increase in households at the lower end of the income distribution tended to hold down median household income," he told reporters.

UPDATE 2:  Following up onthe Reuters article, I went back and, sure enough, real median income of al family households increased across the board.  Nonfamily households, specifically those consisting of a man, are responsible for the entire decline:

I have no diea what is behind this anomalous increase in sincgle male householdss.  My first guess would be young men moving out on their own, but age group 25-34 was one of the few to show an actual increas in income. Perhaps an increase in younger (i.e., under 25 men moving out of the basement?

Another important breakdown is income across the  board including part-timers, vs. income of full-timers only.  The median wage for male full-timers actually fell slightly, while that of full-time  women workers rose slightly -- but not enough to overcome the deficit by men.

Even more interestingly, despite that, the real median income for all workers including part-timers rose:

In other words, the rise in incomes among wage-earners in 2014 is not being driven by raises, but rather by the conversion of part-timers to full-time work, and/or by the increase in hours worked by part-timers.  This is important information.  It explains why median weekly income has been flat to declining, while median hourly income has been increasing.

Tomorrow night the state of Oklahoma is set to execute Richard Glossip for the murder of a former boss. A coworker admittedly was the actual killer. There is no physical evidence tying him to the crime.

He is being executed based on the testimony of a single witness: the triggerman claims Glossip put him up to the job.

This is a case where the wisdom of the ancients remains true.  Human nature has not changed. Nobody's life should depend on the perceived credibility of a single other person, particularly where that single person has an incentive to be untruthful. Where are the Christian fundamentalists now? 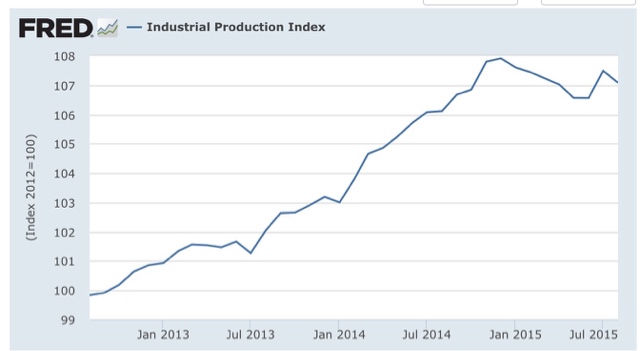 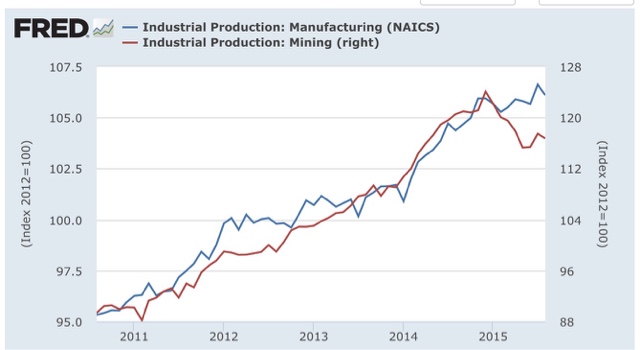 Technically, the Chinese Meltdown Isn't That Big a Technical Deal

This is just too rich.

Powerline was one of several conservative blogs that broke the "Rathergate" story.  Several weeks before the 2004 presidential election, Dan Rather and CBS news reported something negative about George Bush's Texas National Guard duty.  I don't remember what it was, but Rather based the story on a set of documents.  Somehow several conservative blogs including Powerline obtained the documents and determined they were forged.  IIRC correctly, Time magazine named them blog of the year.

Here's a link to the Wikipedia entry for more detail.

Here's the best part of this.  Earlier this year, John Hinderker of Powerline wrote five stories titled, "What happened to Harry Reid?"  Over the course of the five articles, Hinderker theorizes several possibilities about how Reid got his black eye.  At some point, he ran a story based on a source who, well, lied to Hinderaker.  The "source" revealed his deception to a Nevada newspaper:

In the pages of the Las Vegas Sun, a man named Larry Pfeifer announced that he had successfully duped a conservative blogger into running a story that Senate Minority Leader Harry Reid's recent injuries to his eyes and face were the result of a dustup with his own family.

Hinderaker would have recognized Pfeifer's name; he had published Pfeifer's account on Power Line only a few weeks earlier.

Rather lost his job because of the story.  Hinideraker is still writing for Powerline.  I'm sure the boys at Powerline they have formulated some type of juicy rationalization to describe the difference between Hinderaker and Rather.    But, they're the same fact pattern.

Why is this important now?  Because Powerline is cranking up a series of posts on the movie "Truth" which is based on the Rathergate story.  I'm sure there will be lots of reminiscing about how important their blog was to the story.

There will probably be no mention of Hinderaker's Dan Rather impersonation earlier this year.