There were a number a changes among the short leading indicators this week at the margins, in a somewhat surprising direction. Since I’ll be posting my semi-annual updates of my short and long term forecasts over the next week or two, there is a lot for me to think about!

Anyway, as usual, clicking over and reading should be educational for you, and also rewards me a little bit for the effort I put into this enterprise.
Posted by New Deal democrat at 7:20:00 AM

My updated look at housing sales and construction

My midyear 2019 update on housing construction and sales is up at Seeking Alpha.

Among other things, I go through nine metrics and show the order in which they typically turn, with very significant lags between the first and last indicators. As a result, housing is telling us very different things about the economy over the next 6 - 9 months vs. the next 12 - 18 months.

Judging by the comments there, people still want to see the prices as leading sales, even though almost always sales turn up or down first before prices do.

As an aside of that, Wolf Richter has a very good piece up about the downturn in foreign purchases of US housing. Well-heeled foreigners, and in particular Chinese buyers, have been very important marginal drivers of the high end real estate market, especially in California, New York, and Florida.

That foreign buying has fallen off a cliff in the last year or so probably explains a lot of the reason why the median price of new homes has fallen so quickly and dramatically along with the 2018 downturn in new home sales, as shown below:

Initial jobless claims last week were 216,000. This is average for the past 18 months. As of this week, the four week average is 8.6% above its recent low:

So this too remains positive.

Comparisons have been  getting closer to crossing the threshold from lower to higher,  but this week moved lower to -3.8% YoY.  A longer term view shows that - so far - this is most consistent with the 1984, 1994, and 1996 slowdowns, and not a recession: 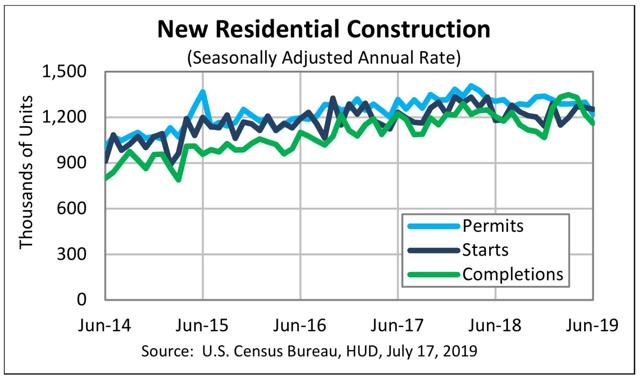 June consumption was strong, while production was weak


This morning’s retail sales and industrial production releases for June are consistent with my take that the consumer sector of the economy is doing OK, while the production sector remains in trouble.

Retail sales are one of my favorite indicators, because in real terms they can tell us so much about the present, near term forecast, and longer term forecast for the economy.

This morning retail sales for June were reported up +0.4%, while May was revised downward by -0.1%. Since consumer inflation increased by less than 0.1% last month, through the magic of rounding, real retail sales also rose +0.4%. The strength of the past two months means that YoY real retail sales are now up +1.7%.

Next, although the relationship is noisy, because real retail sales measured YoY tend to lead employment (red in the graph below) by a number of months, here is that relationship for the past 25 years, measured quarterly to cut down on noise:

I still expect some softness in the employment reports in the next few months, but the renewed strength in real retail sales means that it may pass.

As these made yet another new high in June, that is an argument against any actual downturn in the economy for the rest of this year.

But if the consumer side of the economy looks pretty good, the production side continued to lag in June, as industrial production as a whole was unchanged. Manufacturing production did increase +0.4%:

On the one hand, both may have bottomed in April, following the “mini-recession” brought on by the January government shutdown and some trade war fallout. On the other, both remain significantly below their expansion peaks set six months ago.

If an actual downturn is going to begin in the production sector, it will show up first in the new orders portions of the regional Fed indexes, the average of which has remained above zero so far.

The consumer vs. the producer economy

Prof. Edward Leamer wrote over a decade ago that, in a consumer led recession, first housing turns, then vehicle sales, then other consumer goods.

What do home and vehicle sales tell us now about the economy, vs. corporate profits? This post is up at Seeking Alpha.

As usual, clicking over and reading puts a penny or two in my pocket.
Posted by New Deal democrat at 9:06:00 AM 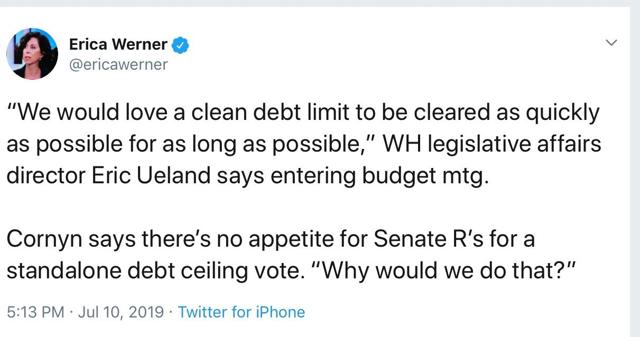