Weekly Indicators for July 3 - 7 at XE.com

This week, for this first time in years, there was a change in the longer term outlook.
Posted by New Deal democrat at 9:20:00 AM

June jobs report: great headline, but once again where are the wages?!?

The more leading numbers in the report tell us about where the economy is likely to be a few months from now. These were mainly positive.

The best thing about this report was the headline number of jobs added, plus the big positive revisions to April and May, which brought the average of the last three months to +191,000.  Most of the leading internals were also positive, suggesting the positive headline news should continue over the next six months. Those not in the labor force but who want a job now also declined to a post-recession low (but still elevated by nearly 1 million above the late 1990s boom.)

While the unemployment and underemployment rates went up, this was balanced by the increase in labor force participation rate.

One weak spot was that involuntary part-time employment increased slightly.  Also, politically, Trump  has so far actually *underperformed* Obama in the net for manufacturing and coal mining jobs.

But the one big negative -- broken record here -- was wages, which have now grown only +2.3% YoY for nonsupervisory workers.  So while this a a very good late cycle report, my fears are increasing about how bad it will be for workers when the next recession does hit.

Here is a photo of the dessert I got yesterday at my favorite local authentic Mexican restaurant: 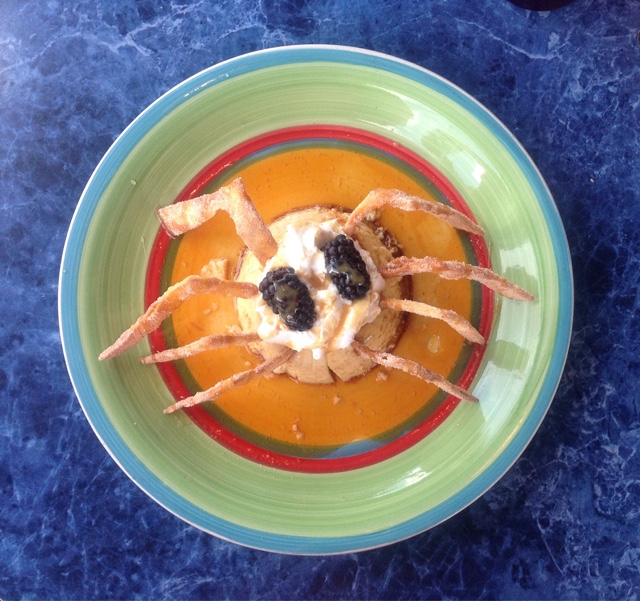 It is flan with whipped cream, a couple of blackberries, and shaped cinnamon sticks.  I had to laugh when the waiter delivered it.

Reality begins to sink in for GOPer economic confidence


While we are waiting for tomorrow's employment report, here's a little something to chew on.

In the immediate aftermath of the Presidential election -- as in, by the end of that week -- Gallup's measure of economic confidence soared, from its 2016 average of roughly -10 to a positive number and to nearly +10 by the end of November:

Since I have very little faith in the GOP agenda to deliver any uptick in growth, I have been watching and waiting for this confidence to ebb.  It did somewhat beginning in March, but never to the point of coming close to that in the final year of Obama's term. (For the doubters, consider George W. Bush's economic policies.  Despite being the most right-wing since the 1950s, we had the weakest post-War jobs and wage growth on record, and a weak GDP to boot. Where was the trickle-down?)

As shown in the graph, it has since rebounded.  But it appears that after half a year of accomplishing absolutely nothing legislatively, the reality that the economy really hasn't changed at all -- in fact it may be waning just a bit -- is beginning to sink in.

While houses and cars slow down, manufacturing picks up

There were conflicting reports on the economy Monday, in the form of June vehicle sales vs. June manufacturing.

In lieu of a more traditional Independance Day post, in view of the fact that the economic expansion turned 8 years old this week, I thought I would take a moment to highlight how far we have come.  Because as mediocre as some things are, we have come a long, long way since the dark days of June 30, 2009.
Unemployment has fallen from a high of 10.0 to 4.2%, and underemployment has fallen from 17.1% to 8.4%:

Over 16 million jobs have been added since the bottom in February 2010:

As of May, real median household income just made a  new high (h/t Doug Short): 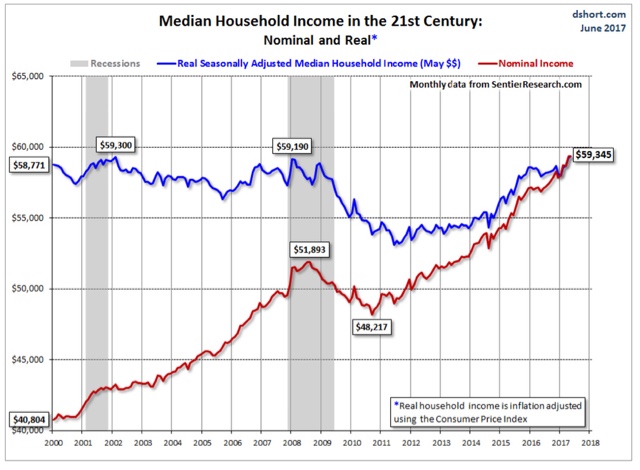 Since this statistic is skewed by the increasing share of households headed by retirees, the odds are pretty good that working age real median household income is actually doing a little better.
In real terms, the amount of wages paid out to regular nonsupervisory workers has increased by about 22%:

Finallly, real GDP per capita has increased by 11%:

None of this is stellar. In particular, I wish that wage growth were more stout.
But when you compare where we were then with where we are now, there's no contest. So Happy 4th of July, economy!

A prescient forecast by the Senior Loan Officer Survey


There has been a spate of Doomish commentary recently (for example, here) claiming that the stalling of commericial and industrial loan growth means that we are heading into, if not already in, a recession. 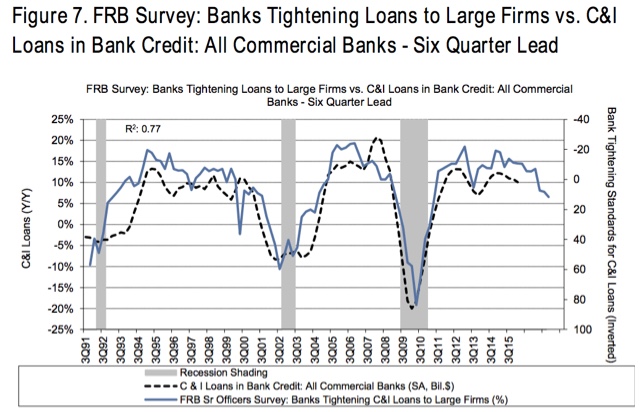 The relationship forecast that YoY commercial and industrial loans were going to decelerate to about +5% YoY.  I wish I knew whose graph it was, because I would sure like to give them proper kudos! Because that is exactly what has happened since (note that FRED does not permit me to lag one series of data):

Commercial and industrial loans have flatlined, just as forecast by the writer in Q1 2015.

Note, of course that in the last three quarters, the Senior Loan Officers have reported a slight loosening of standards, which suggests that commercial and industrial loans will continue to flatline through about the end of the year, and improve in 2018.

Finally, I have recently noted that the weekly Chicago National Financial Conditions Index does a decent job of forecasting the direction of the Senior Loan Officer Survey itself.  So here is the Chicago NFCI  vs. YoY commercial and industrial loans:

The Chicago weekly survey is forecasting a continued improvement in the Senior Loan Officer Survey when it is reported for Q2 in about a month.