Weekly Indicators for May 30 - June 3 at XE.com

Despite the punk jobs report, the high frequency data is almost all positive or neutral.  There are very few negatives.
Posted by New Deal democrat at 8:33:00 AM

Decelerating jobs growth: I told you so

Every now and then, I like to remind you that you are reading the right blog.  Because if I don't pat myself on the back, nobody else is going to, so please bear with me.

Anyway, the weakness in jobs growth was clearly forecast by a downturn in the Labor Market Conditions Index since last summer.  I'm not just talking in retrospect, because I made exactly this forecast.  Here I am last August, discussing the LMCI as a leading indicator:


the LMCI consistently leads the YoY% growth in jobs by 6 - 12 months, but YoY job growth (red) is a much smoother measure:
.... since the LMCI does lead the much smoother YoY growth in jobs, it strongly suggests that YoY payroll growth is going to decline over the next 6 months or so.  And that can only happen if those payroll numbers generally come in under 225,000, and probably even below 200,000 through next winter.

Six months later, in February, I warned that the LMCI portended further weakness:

Average growth for the last 6 months has been 218,000 per month. with 3 months upnder 200,000.
The LMCI forecasts that the decelerating trend in job growth will continue, which means I expect average jobs growth during the next 6 months to continue to average under 225,000.

With three months more jobs data in, it is clear that the deceleration has continued - and intensified.

April LMCI will be reported next week.  In the meantime, here is what I said about last month's report: 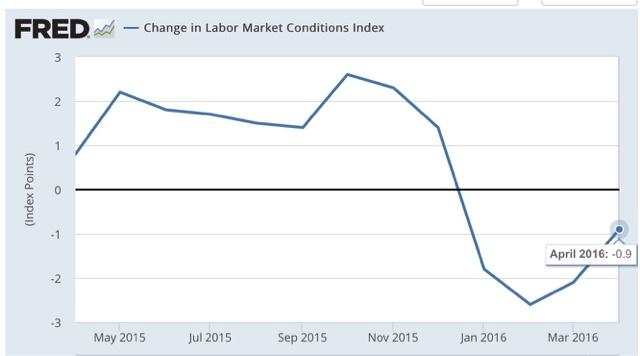 This is another small addition to the evidence that 2017 might be a poor year. It also suggests that monthly job gains that have already decelerated from a 225,000 rate, will continue to do so. In other words, export more reports of 1xx,000 to come. But at the same time, it is nowhere near as negative as it has been in the past at the onset of recessions.


Other important coincident indicators help  us paint a more complete picture of the present:

Everything else abouit this report was pre-recessionary. The vast majority of leading indicators in the report were negative. Revisions were down. Those who want a job now increased, involuntary part time work increased, construction, manufacturing, and temporary jobs were down. YoY wage growth is not acceleratiing. Even the positives in aggregate hours and payrolls are overshadowed by the big downward revisions in the prior months.

Two takeaways:  1. One bad employment report shouldn't change an economic forecast, particularly when the Labor Market Conditions INdex has been forecasting decelerating employment gains since last summer -  but it does go into the balance.

Chile is Giving Away Electricity Thanks to Solar Power (BB)

Chile’s solar industry has expanded so quickly that it’s giving electricity away for free.

Spot prices reached zero in parts of the country on 113 days through April, a number that’s on track to beat last year’s total of 192 days, according to Chile’s central grid operator. While that may be good for consumers, it’s bad news for companies that own power plants struggling to generate revenue and developers seeking financing for new facilities.

The main culprit is the northern part of the country, in the Atacama desert. Chile’s increasing energy demand, pushed by booming mine production and economic growth, helped spur the development of 29 solar farms, with another 15 planned, on the country’s central power grid. Now the nation faces slowing demand for energy as copper production slows amid a global glut, and those power plants are oversupplying a region that lacks transmission lines to distribute the electricity elsewhere. 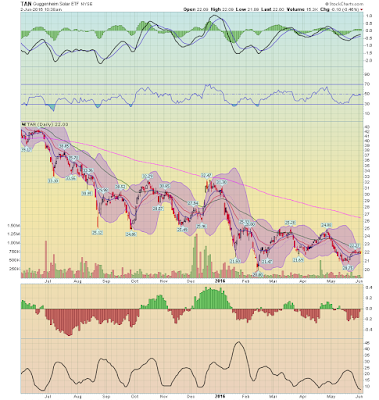 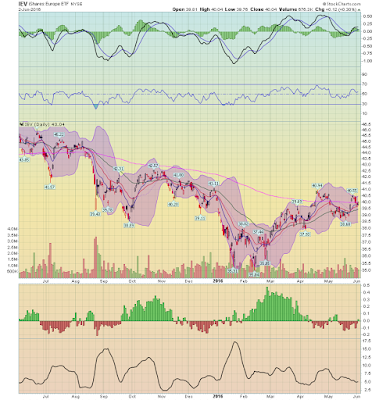 Why does Kevin Drum want to kill Social Security?


How to kill Social Security in 2 easy steps

the best way to address retirement security is to continue reforming 401(k) plans and to expand Social Security—but only for low-income workers. Middle-class workers are generally doing reasonably well, and certainly as well as they did in the past. We don't need a massive and expensive expansion of Social Security for everyone, but we do need to make Social Security more generous for the bottom quarter or so of the population that's doing poorly in both relative and absolute terms. This is something that every liberal ought to support, and hopefully this is the bandwagon that President Obama in now on.

Now that 3/4 of the population will be paying into a system to transfer their income to the bottom 1/4, you have instantly created a majority constituency that will benefit from killing the now-welfare program.

Why does Kevin Drum want to kill Social Security?
Posted by New Deal democrat at 9:07:00 AM

Millions of Americans enrolled in for-profit colleges in recent years to learn a trade and find decent-paying work. A new study found devastating results for many of their careers.

The working paper, published this week by the National Bureau of Economic Research, tracks 1.4 million students who left a for-profit school from 2006 through 2008. Because students at these schools tend to be older than recent high-school graduates, they’ve spent time in the workforce. The researchers used Education Department and Internal Revenue Service data to track their earnings before and after they left school.

The result: Students on average were worse off after attending for-profit schools. Undergraduates were less likely to be employed, and earned smaller paychecks–about $600 to $700 per year less–after leaving school compared to their lives before. Those who enrolled in certificate programs made roughly $920 less per year in the six years after school compared to before they enrolled.

Daily Chart of the XLIs 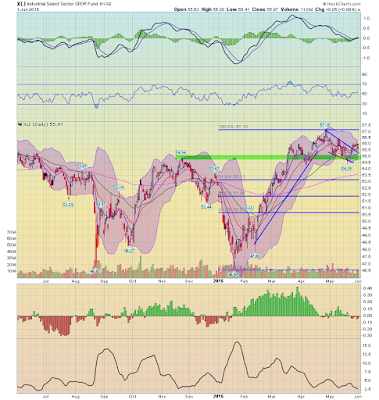 Based on a nearly 70 year history, this adds strongly to the accumulating evidence that the shallow industrial recession has, in fact, bottomed.  This post is up at XE.com.
Posted by New Deal democrat at 10:06:00 AM

A Review of Oil Supply and Demand (Econbrowser) 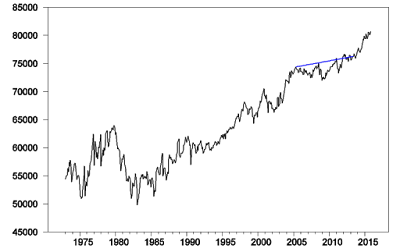 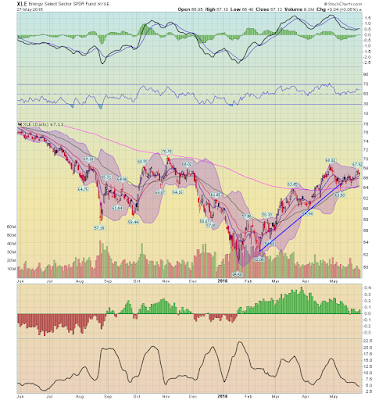 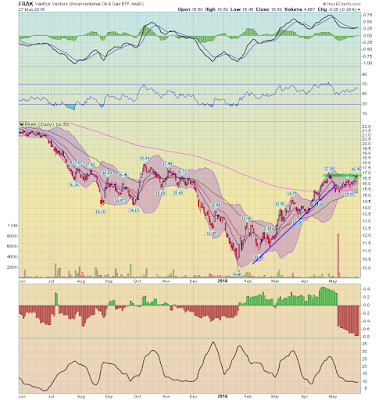 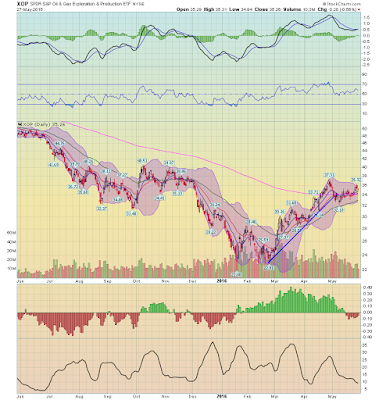 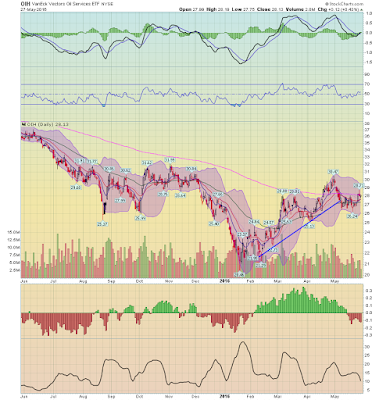 The Yield Curve Thinks the Economy is Slowing (Dr. Ed)

The FOMC is tightening monetary policy because Fed officials believe that the US economy is showing more signs of sustainable growth with inflation rising back near their 2% target. Yet the yield curve is warning that the Fed’s moves could slow the US economy and halt the desired upturn in the inflation rate. Another possibility is that while the US economy might be strong enough to tolerate the normalization of US monetary policy, the global economy is much more vulnerable to Fed tightening moves. 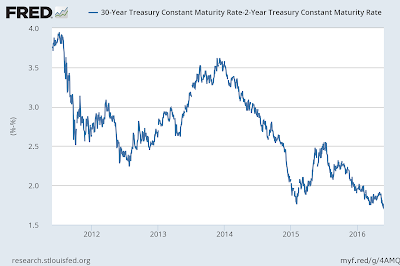 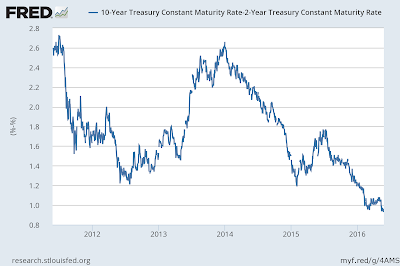 The War on Data (CR)

People have different priorities and different values. But we share the same data.  Over the last few days, we've heard a presidential contender make comments completing ignoring the data.   This should concern everyone - ignoring data leads to irresponsible comments and poor policy decisions. 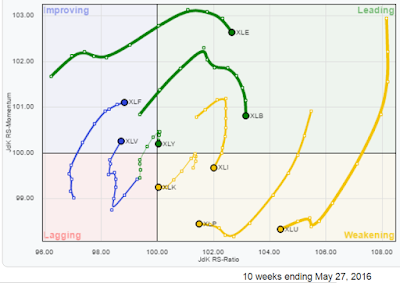 The financial and healthcare sector are advancing relative to the SPYs.  Consumer discretionary is weakly leading.  Energy and basic materials continue to outperform. 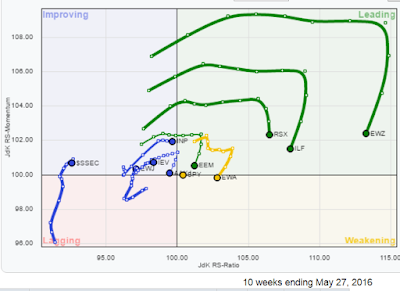 Russia, Latin America and Brazil are outperforming the US.  India is about to move into the outperforming camp.  Europe is trying to more up, as is Japan and all Asia less Japan.

The Rich Don't Move Away Because of Taxes (BB)

Rich people do move for tax reasons, but only about 2.2 percent of the time, the study estimates, with little impact on revenues in the states they leave behind. If states increase their top tax rate by 10 percent, they risk losing just 1 percent of their population of millionaires, the researchers found, using a statistical model based on millionaires' past movements from state to state.

The researchers analyzed 45 million tax records, covering every filer who reported income of at least $1 million in any year from 1999 to 2011, and found that the rich are in fact less likely to move around than the poor. Typically, about half a million households report such an income, and only 2.4 percent of these taxpayers move from state to state in any given year. That compares with 2.9 percent of the general population and 4.5 percent of those earning about $10,000 a year.

US Equity, US Bond and International Reviews Are Up at XE.com

US Bond Market Week in Review
Posted by Unknown at 6:54:00 AM