Not surprisingly, stocks and bonds took center stage this week.
Posted by New Deal democrat at 7:33:00 AM

Trump specifically campaigned on bringing back manufacturing and mining jobs.  Is he keeping this promise?
November was revised downward by -36,000. December was revised upward by +12,000, for a net change of -24,000.

This was a very mixed report. The headline jobs number was very good, but most of the internals were flat to negative, including an uptick in the underemployment rate, a decline in the manufacturing workweek, and a decline in prime age labor participation. Short term unemployment also increased slightly.

And of course, wage growth for non-managerial personnel continued to be somnolent.

So while we have a recent increase in employment growth, most of the other measures are either tepid or are fraying a little bit around the edges.

UPDATE: I see where the main item in most other discussions in this report is "the big jump in wages!

Ummm, not so fast.  The "big raise" of 2.9% YoY is for ALL employees, including the bosses. The number for workers who aren't managers, as I report above, is a tepid 2.4%, right about where it has been for several years. So it workers got 2.4% YoY, but workers plus bosses got 2.9% YoY, then that means the bosses gave themselves big fat raises that have not been shared with the line workers.

About that Trump wage boom

- by New Deal democrat
Over last weekend, I read a bunch of notes which indicated that Trump was claiming credit for a boom in wage growth.
Let's take a look:
THIS is a wage boom:

During the first year of Trump's term, real wages grew by 0.6%. This is less than half of the rate of a real wage boom.

[Note: This is a post I was working on last week. I hypothesized that the employment cost index would validate the analysis. Well, I didn't get around to posting it, and the ECI came out this morning. So, how did I do? ] 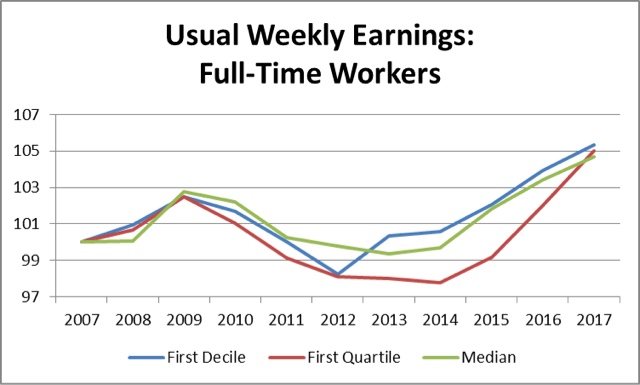 But I thought I would dig deeper to see why the anomaly had occurred.  So I took a detailed look at each of the three qualifiers: "real," "median," and "weekly."  Where did the dowturn come from?

Well, part of it certainly had to do with inflation.  Recall that one of my favorite measures, "real aggregate wages" actually peaked in July and has declined -0.8% since then, mainly due to an uptick in inflation.  It is easy to break that out, since the BLS also releases nominal weekly wage data.  So here are the two together for comparison:

The uptick in inflation is responsible for about 1/3 of the decline in real weekly median wages.

Next, let's take a look at average hours worked per week:

These actually increased between the 2nd and 4th quarters.  So it's not that fewer hours are being worked per week.

Is something going on with the "median" vs. "average" measures? The next graph compares the weekly measure with real average hourly wages:

Median wages declined more than average wages. So that tells us that the main thing that probably happened had to do with the makeup of the labor force.

Eureka! Professional and business hiring has remained fairly steady, even having a small bump in the second quarter. But the retail apocalypse manifested itself by outright declines in the 3rd and especially second quarters, vs. flatness in the 4th.

It appears the actual outliers were those two quarters rather than the 4th quarter. The downturn in low paying retail jobs in the middle quarters of 2017 made the median 50th percentile worker someone who worked in a somewhat higher paying job.

The best way to test this hypothesis is to see what happened quarter over quarter to pay for identical jobs.  That is exactly what gets measured by the Employment Cost Index. If what mainly happened in the 4th quarter is that the mix of jobs in the economy changed, then the only decline we should see in the E.C.I. is that due to inflation.  That report comes out next week, so we will have the answer soon enough.

AAAAND, this morning the Employment Cost index showed that wages *ROSE*  0.5% in Q4, and total compensation rose 0.6%. The  nominalYoY% increase for each was 2.5%:

So the big dropoff in weekly median wages does indeed appear to be a story of a change in the mix of jobs, rather than a drop in actual pay of a job. Still, nominal wage growth in the latter part of 2017 was eclipsed by the uptick in inflation. This, by the way, adds to the evidence that the increase in consumer spending in the last few months has been driven by the wealth effect (increasing house and stock prices for the affluent and wealthy) and dipping into savings for everybody else.


Suddenly I have a lot to say about the economy. My sense is that we are on to a new phase after the 2015 shallow oil-patch centered recession and 2016-17 rebound. The data has a feel to it of a late cycle blowoff.

Let's start with this morning's personal income and spending.  In the last 4 months, personal consumption expenditures, like retail sales, have taken off:

Typically after mid-cycle personal consumption expenditures outpace retail sales (10 of the 11 previous cycles, to be precise). This is so regular that it is a primary mid-cycle indicator for me.

Well, as you can see, in the last 4 months, retail sales have come roaring back, even compared with PCE's.  But if you cast your eyes to the left edge of the graph, you can see the tail end of the same phenomenon in 1999. Although I haven't posted the nominal (vs. inflation adjusted) numbers, the same thing happened in the late 1990s.  In 1999, both retail sales and PCE's accelerated, but retail even more than PCE'S. When the stock market peaked at the beginning of 2000, both started declining rapidly, culminating in a recession 15 months later.

That we might be entering a blowoff stage is confirmed by the personal saving rate, as shown below:

Rapid declines in this rate tend to happen after mid-cycle. On the one hand, they are signs of economic confidence, as consumers are willing to go further out on a limb with finances. On the other hand, the lower savings rate leaves consumers vulnerable to future shocks.

In 1999, the blowoff was highlighted by the wealth effect.  The recent melt up in the stock market may be energizing the same behavior.  In particular, soaring consumer confidence in the last 4 months is concentrated on GOPers: 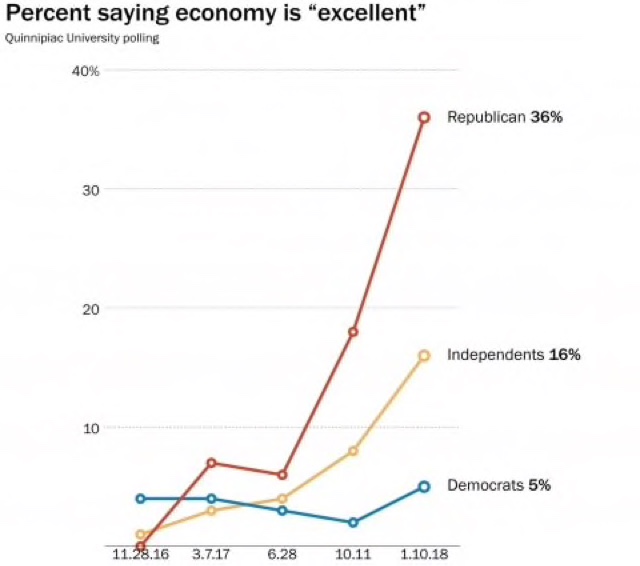 Even democrats feel a little more confident, and independents significantly more so.  In 2013, the situation was reversed, where it looked like increased spending was powered by confident democrats (GOPers thought we were in the abyss).

Another facet of the data that suggests a blowoff might be underway is the surge in interest rates.  Below is a graph of 2-, 10-  and 30 year rates since just before the presidential election:

I don't profess any insight as to whether interest rates will continue to rise or not, but it is interesting that the 30 year bond has not broken out of its high one year ago.

Housing stalled for several quarters last year in the face of aa 1% increase in mortgage rates, and slowed down even more in 2014 when mortgage rates rose 1.4% off their bottom.  If mortgage rates hit 4.4% and stay above that level for several months, I expect another housing slowdown to begin, although given the demographic tailwind from the Millennial generation, I wouldn't expect an outright downturn in housing unless mortgage rates rise all the way to about 5%.

In other words, it is probably OK to party like it was 1999. There wasn't a recession until 2001, and this blowoff isn't likely to give way to a recession in the immediate future either.
Posted by New Deal democrat at 9:00:00 AM