The one noteworthy change was in the yield curve.
Posted by New Deal democrat at 8:28:00 AM

On the economy, breathe easy: it's still on autopilot

While there has been some nearly nuclear powered political drama in the last two weeks (and I supported Bernie Sanders last year, so that should tell you everything you need to know about my political opinions about that), the opposite is true about the economy. It remains on no-drama autopilot.  Absolutely nothing has happened to change the trajectory it has been on since a year ago.

In that regard, let me remind you that for a few months the Doomers were trumpeting the differences between the "soft data" like confidence surveys and the diffusions indeses of the regional Feds and the ISM, vs. the "hard data" of sales, income, and more than anything else industrial production.

Well, last month the various components of industrial production all moved in lockstep for once.  Here's manufacturing:

That's a very nice uptick!  And here's mining and utilities:

Mining continues its rebound, and for once utilities weren't hugely volatile.

Steady as she goes there.

About the only stall in the "hard data" is in the broader total business sales:

Manufacturers' and wholesalers' more volatile  sales (a surge, then a stall)  are the big culprits here:

Certainly not nirvana given continued subdued wage growth as well, but by no means a fragile flower on the verge of implosion.

So for now, breathe easy about the economy. It remains on autopilot, set to "steady as she goes."
Posted by New Deal democrat at 7:59:00 AM

Worth repeating: real median lifetime income has barely budged since 1958

The Brookings Institution studied total real earnings over workers' prime employment ages from 25 to 55. making use of the most comprehensive measure available: Social Security payments based on payroll data from 1957 to 2013.

I'll cut right to the chase.  Here's the conclusion:


Adjusting for inflation, the median male worker born in 1958 earned just 1 percent more during his career compared with the median man born 27 years earlier, in 1932.


I am reminded of a line from Billy Joel's song, "Allentown":


Every child had a pretty good shot,
to get at least as far as their old man got.


This is the most damning evidence I've seen yet that the American Dream has been dying for over a generation now.  And people wonder why the electorate is grasping at straws, hoping for somebody to deliver real economic change.
Posted by New Deal democrat at 11:37:00 AM

Housing permits and starts: hint of an autumn chill in the air?

Yesterday morning's report on April housing permits and starts disappointed.  Does the report have wider significance?

Is the "rental affordability crisis" abating?

This is a serious real-world issue. I have been tracking rental vacancies, construction, and rents ever since.  The Q1 2017 report on vacancies and rents was released several weeks ago, so let's take an updated look.

The bottom line is that rent increases have stopped in the last year, and with increased wages, the effect is that rent has become a little more affordable.  Median asking rent was unchanged at $864 in the first quarter of 2017, and is actually down $6 from $870 YoY, a decrease of -0.75%. Median asking rent has not made a new high in a year, as you can see in the below graph:

While vacancies remain tight, the vacancy rate appears to have bottomed over the last two years, so while there is still stress, the level of stress is decreasing a little: 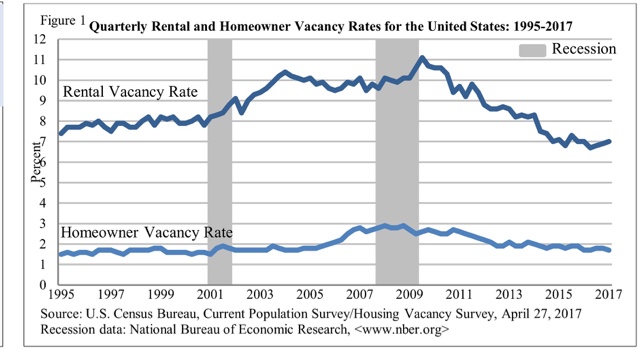 It is worthwhile to note that the CPI for owner's equivalent rent, the major component of inflation, remains near the highest levels in a decade, although it has backed off a little in recent months:

Finally , HUD recently premiered a Rental Affordability Index,, using the ACS data. Similar to my chart above, it compares median renter income with median asking rent. Please note, however, that this has only been updated through Q4 of last year: 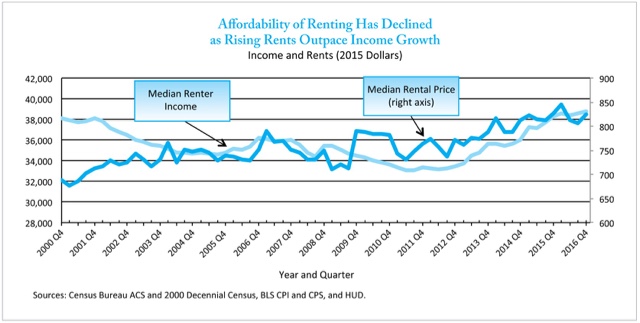 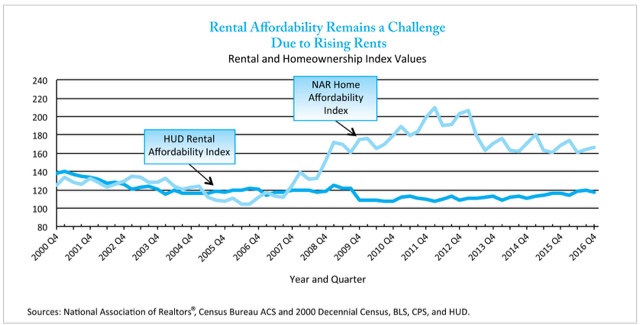 But regardless of which method we use, while it continues to appear that apartment rents as a share of renter income are quite high, the crunch has prbably passed peak, and the "rental affordability crisis" appears to be abating at least a little.
Posted by New Deal democrat at 8:27:00 AM