It’s pretty clear that manufacturing is in a recession right now. The economy as a whole isn’t because the consumer sector of the economy is still doing fairly well.

As usual, clicking over and reading should bring you up to the minute on the economy, and reward me a little bit for my efforts.
Posted by New Deal democrat at 8:22:00 AM

I am highlighting these because many leading indicators overall strongly suggest that an employment slowdown is coming. The following more leading numbers in the report tell us about where the economy is likely to be a few months from now. These were mixed.
Wages and participation rates

Trump specifically campaigned on bringing back manufacturing and mining jobs.  Is he keeping this promise?
July was revised upward by 7,000. August was also revised upward by 38,000, for a net change of 45,000.

The only fly in the ointment, aside from the headline number, was as I expected in the leading sectors of the establishment survey. Manufacturing hours fell, as did manufacturing employment. Construction employment rose slightly, especially as to the most leading residential construction sector. And while temporary employment rose “strongly,” August was revised down slightly, and July, which was originally reported up 2,200, is now shown as a decline of -10,500.

In short, a great report in the coincident and lagging aspects, with some pronounced weakness in the leading aspects.

Motor vehicle sales are a short leading indicator. In particular, on the consumer side, they have typically rolled over after housing but before consumer nondurables, so they are useful in gauging the health of the consumer.

More recently I’ve started tracking heavy truck sales as well. That’s because, in addition for being a proxy for the producer side of the economy, as the below graph shows, they are much less noisy that light vehicle sales, and susceptible to fewer false positives (note: measure is quarterly to cut down further on noise):

Car and light truck sales have typically declined about 10% or more on a three month moving average basis before a recession hits, which would be below 16.5 million vehicles annualized, but there is lots more noise.

Zooming in on the past few years on a monthly basis, the below graphs norms September 2019’s sales levels (not yet shown on FRED) to 100:

In September, 17.2 million light vehicles were sold on an annualized basis, down only about 5% from peak. But 41,800 heavy trucks were sold, a -11.6% decline from July’s record high.

Only one month, and not nearly enough to warrant any imminent recession concerns. But it’s worth noting that the one other time that truck sales declined sharply before auto sales was in the year prior to the 2001 producer-led recession. If heavy truck sales should fall by -15% or more, which would be to the 40,200 or fewer monthly, that would be a yellow flag. For now, considering the contraction shown in the ISM manufacturing index, heavy truck sales bear watching more closely.
Posted by New Deal democrat at 8:00:00 AM

Expect a weak report for the leading jobs sectors on Friday

September motor vehicle sales will be reported later today, after the domestic US manufacturers post their numbers. Sales of all other vehicles were down -13% YoY, but that is without seasonal adjustment including for Labor Day, so the seasonally adjusted sales might tell a completely different story.

In the meantime, with an eye towards Friday’s jobs report, let’s take a look at what is happening with temporary help services, one of the most leading components of employment.

Every week I update the American Staffing Index, (from which site the first four graphs below are taken) which has a 14 year history and in that time has correlated pretty well with the final temp help employment numbers. This year it has turned increasingly negative, and this week had the most negative YoY reading so far, down -5.45% YoY for the single week, and off -4.9% YoY as a 4 week moving average: 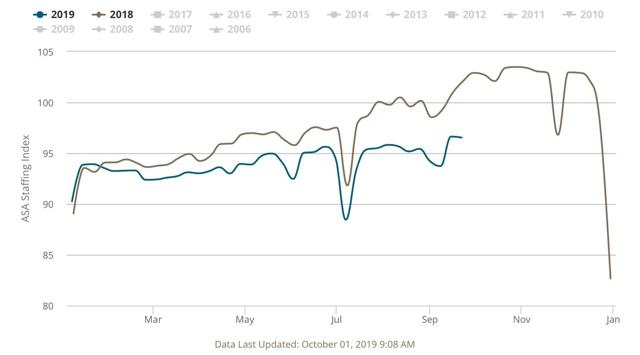 Maybe the best way to see how bad this is, is this non-seasonally adjusted look at the index’s entire history:

Note how the index typically rises over the course of the year until plunging right after the Christmas and New Year’s holidays — but this year has barely risen at all, the worst performance since its 2008 plunge during the Great Recession.

Let’s also compare this year with several other years during this expansion that have been relatively week. First, here’s 2016-17: 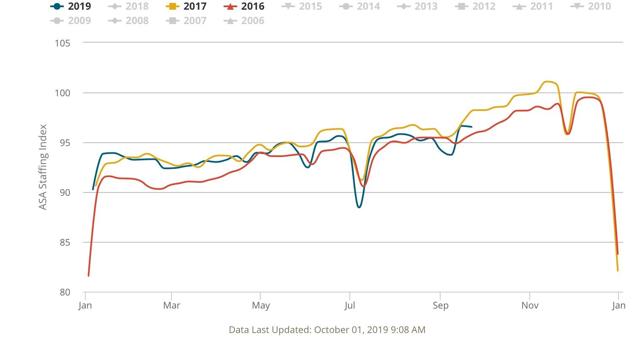 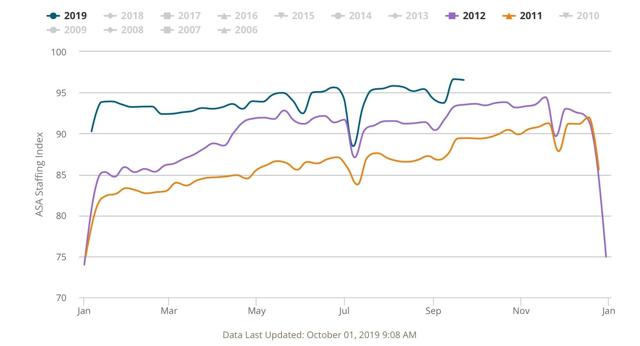 Now let’s look at temporary jobs, averaged quarterly, from the jobs reports from 2011 to the present:

Although there will still gains, there was a big downshift in 2012, outright losses in early 2016, and continuing weakness, albeit with gains, through 2017. There have been losses in both Q1 and Q2 of this year.

As I reported a few weeks ago, the pattern has been for temp jobs to “surprisingly” increase in the initial jobs report, only to be revised significantly downward over the next two months. Last month August’s gain was initially reported at +15,400.

If Friday’s report runs true to form, there will be “surprising” gains in temp jobs, but a big downward revision to August’s number. I fully expect that the final, combined number for August and September will be negative.

The bottom line is, I expect continued weakness in the leading sectors of the jobs report on Friday.
Posted by New Deal democrat at 8:18:00 AM 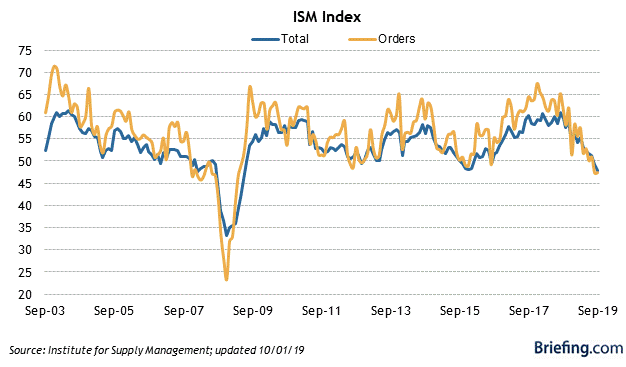 If you’re wondering why it’s so late, it’s because SA pretty much shut down between Friday afternoon and this morning.

Anyway, recession risks are rapidly receding, at least through the 4th Quarter.  As usual, clicking over and reading puts a little jingle in my pocket, as well as brining you up to the moment on the economy.
Posted by New Deal democrat at 7:23:00 AM