Weekly Indicators for May 10 - 14 at Seeking Alpha

The big news in this past week, even though it has been expected for several months, was on the inflation front. That doesn’t affect the nowcast, and hasn’t affected the short term forecast yet. The long term forecast continues to be buffetted by increased interest rates.

In my commentary this week, I make reference to supply constraints. I bring this up here because I read a tweet today by someone whose political analysis I respect, showing a graph of the spike in lumber prices, and stating that lumber was “in a bubble.”

No it’s not. The defining feature of a bubble is speculation on the continuing increase in prices. Fifteen+ years ago it was “everyone knows real estate only goes up!” In 1999 it was “everyone knows these internet companies are going to completely take over commerce!” In 1929 it was “stock prices have reached a permanently high level!” In the 1700s it was “the price of land in the Mississippi Valley is going to explode!” - which was sort of correct, but it took 200 years to happen. As they say, “being early” is a synonym for “being wrong.”

What is happening with lumber, and computer chips, is similar to what happened during the Oil Embargo of the 1970s. This is a supply constraint. Product cannot (in the 1970s, would not) be supplied fast enough to meet the demand. So the way the product gets rationed is to raise prices until enough buyers stop buying.Whether it is a significant problem or not depends upon how quickly the pace of supply can be increased, a question that I do not pretend to know the answer to.

In any event, as usual, clicking over and reading will bring you up to the virtual moment, and bring me my lunch money.

Industrial production is the King of Coincident Indicators, and is the one whose peaks and troughs most frequently mark the beginning and end of recessions. It had been bouncing back strongly, but in the last several months, has hit something of a snag.

Both of these, however, remain slightly below January’s levels, and -2.7% and -1.4% respectively below their February 2020 peak just before the pandemic hit.

The good news in April was that the declines from February’s Big Texas Freeze have been largely resolved. The bad news is that shortages in some supplies continue to create bottlenecks holding back production.

[T]he index for manufacturing rose 0.4 percent despite a drop in motor vehicle assemblies that principally resulted from shortages of semiconductors. An important contributor to the gain in factory output was the return to operation of plants that were damaged by February's severe weather in the south central region of the country and had remained offline in March.

Most market groups posted gains in April, with the principal exceptions being those related to motor vehicles and parts. Automotive products, transit equipment, and consumer parts all recorded losses, as shortages of semiconductors held back motor vehicle assemblies. Among the other market groups, chemical materials and consumer energy products posted strong gains of 6.7 percent and 3.8 percent, respectively.

The output of utilities moved up 2.6 percent in April after dropping substantially in March, when unseasonably warm weather reduced demand for heating....

The good news for the near future is that these supply chain difficulties are going to be resolved, and as they are resolved, production can be expected to pick up swiftly, given the surge in demand. The important issue will be that the issues get resolved quickly enough so that there is not an episode of “stagnation” caused by resource constraints (a la the gas-fueled stagflation of the 1970s).

But the important point is that the big jump in March didn’t get taken back.  As I wrote last month: “if the big March gain in sales isn’t taken back in the next month or two, then there’s likely to be a similarly large jump in employment by the end of summer.” Further, as I wrote a couple days ago in response to the inflation report, I fully expected the big jump in sales and income fueled by stimulus payments to peter out over the next few months, just as they did last year.As I have pointed out many times, real retail sales (blue in the graph below, /1.5 for scale) tend to lead employment (red) by about 3-4 months. Here’s the long term YoY look from 1993 through February 2020, averaged quarterly to cut down on noise:

And here is the monthly update since the beginning of 2020 (note the huge difference in scale!):

I’ve also included aggregate hours (gold) in the above. Hours tend to be cut more than jobs in recessions, and increase faster in recoveries. The pandemic has been somewhat unique in that, for obvious public health reasons, jobs were cut entirely rather than just hours. Note also the “China shock” in the first few years after 1999, when both jobs and hours continued to be cut, even after sales had rebounded.But saying that there is likely to be a big YoY jump in jobs in the next several months is hardly surprising, given the 22 million loss in jobs last April. So the below graph compares the absolute data, sales on the left scale, and employment on the right:

Again, the brief lag with which employment follows sales is obvious. So I still believe the most important takeaway is that, with the stimulus gains “sticking” so far, there’s likely to be a similarly large jump in employment by the end of summer. A gain of another 4 to 6 million jobs, to close to the pre-pandemic peak, is quite possible.

Here is the trend since last August:

Remember that, at the peak of the pandemic lockdowns, new claims were running 6 million to 7 million per week. On the other hand, current claims remain at a level typical of recessions in the 50 years prior to the pandemic:

‘Fessing up, the April jobs number completely blew up my forecast, based on the monthly decline in initial claims, for gains over 1 million. I increasingly suspect that March’s number close to 1 million may have been as much an outlier to the upside as April’s was to the downside.
I continue to think initial jobless claims will continue their recent strong decline, while the failure of continuing claims to follow suit in the past 5 or 6 weeks is genuine concern - and to be honest is at least some evidence that those on the enhanced pandemic benefits are being picky about returning to work.
Posted by New Deal democrat at 8:13:00 AM

We all expected inflation to arrive: now it’s here

This morning’s report on April inflation confirmed what we already knew: inflation, both from the demand and the supply side, was coming. Now it’s here.

First of all, take the YoY numbers with a grain of salt. Last April saw actual price declines in the teeth of the worst of the pandemic deaths and lockdowns. Here’s the monthly %change since the beginning of 2020 in total inflation (blue), core, i.e., less food and energy (red), and less energy only (gold):
So let’s delete last April, and look at the price increases in the 11 months since last May: 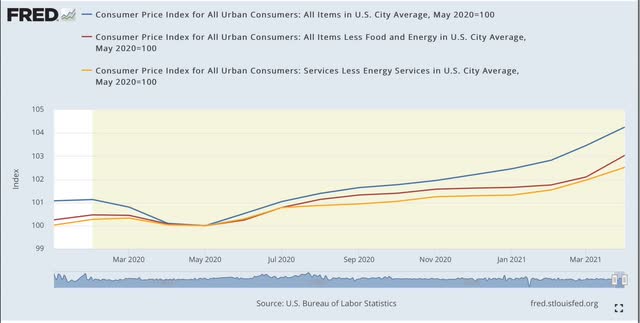 Total prices are up 4.3% since then, but only 3.0% in the “core” groups, and 2.8% less energy. That’s not enough to excite the Fed into action just yet.
As I’ve previously pointed out, typically there’s no problem in the economy till CPI excluding gas prices exceeds 3%, and per the above, we’re not there yet.
Further, below I show total inflation YoY (blue), inflation ex-gas (gold), and Fed funds rates (red, /2 for scale). As shown there, spikes in inflation for a month or two typically haven’t caused the Fed to raise rates (see, e.g., 1995, 2003, and 2013):

Last year, the demand-side effects on spending caused by stimulus payments petered out after a few months:

I expect the same to be the case this year.
So the question is whether the supply side bottlenecks persist enough to spook the Fed. While they might start making noises about raising rates if we get another number like this next month, I think it will take at least two more months of big jumps in prices to actually move them into action.
Posted by New Deal democrat at 9:17:00 AM