Weekly Indicators for March 2 - 6 at XE.com

You really need to begin to prepare for a nasty Q1 GDP number.
Posted by New Deal democrat at 8:41:00 AM

The more leading numbers in the report tell us about where the economy is likely to be a few months from now. These were mixed with a downside bias, basically taking back their gains in January.

But with wages for nonsupervisory personnel only up 1.6% YoY, there remains a giant black hole at its center.

Meanwhile, some measures of underemployment improved, e.g., part-time for economic reasons, and the e/pop ratio for the prime working ages, but on the other hand, those who aren't even in the labor force but want a job now (the supposed "missing workers") increased again.  Not cool.

Personal consumption expenditures for durable goods fails as a mid-cycle indicator, but turns out to be a very reliable long leading indicator.
Posted by New Deal democrat at 10:05:00 AM

This is another small sign of a Q1 slowdown.  Mind you, the four week moving average was 307,000 back on January 17, and we still got a very good employment report.  But a miss to the downside in tomorrow's February report looks more possible.

Ultimately I would like to have a set of indicators to describe an entire business cycle: long leading, short leading, coincident, short lagging, long lagging, and mid-cycle.  A mid-cycle indicator is one that turns roughly in the middle of an economic expansion.  It is a way to focus attention.  Are we in the first part of an expansion, or are we at a point where we should begin to watch for a turn down in long leading indicators?
In this post I want to update 2 series which appear to make good mid-cycle indicators: retail sales vs. personal consumption expenditures, and the personal savings rate minus the inflation rate. 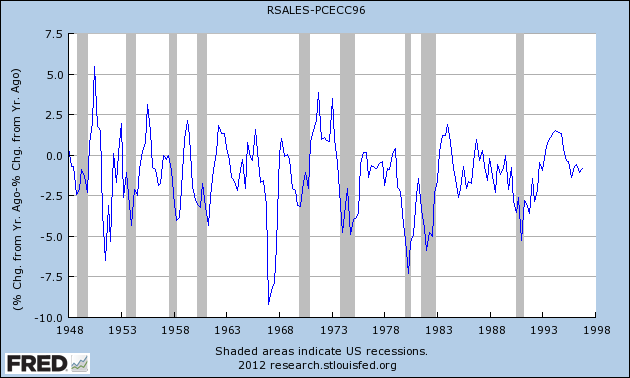 Essentially these graphs tell us that, in the later part of a business cycle, consumers cut back on discretionary purchases to preserve other spending. Until they do, consumer spending does not support any claim that a recession has begun or is even imminent.

I updated this graph a few times last year, noting that it looked like it was turning.

So, what does it show now?  Here is a 25 year history of the relationship, measured YoY: 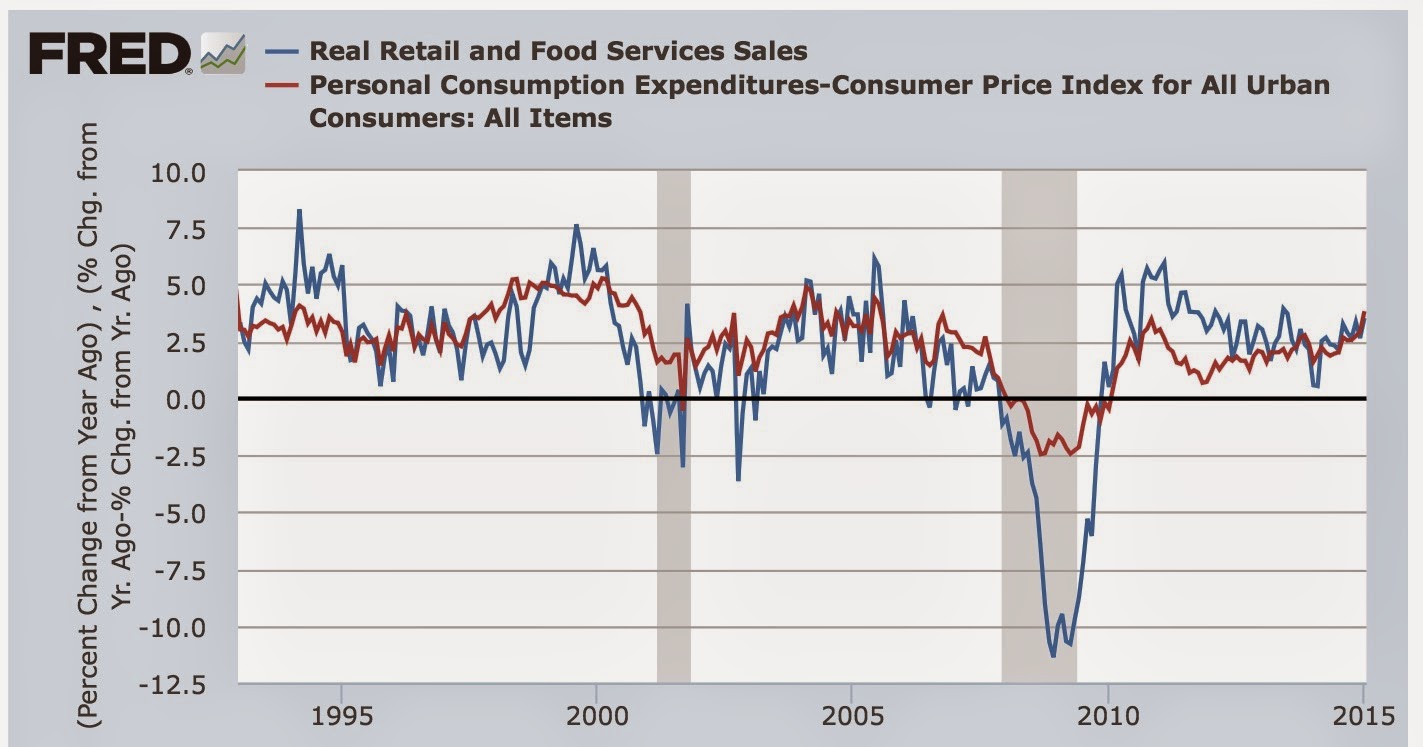 Here is a close-up since the end of the last recession: 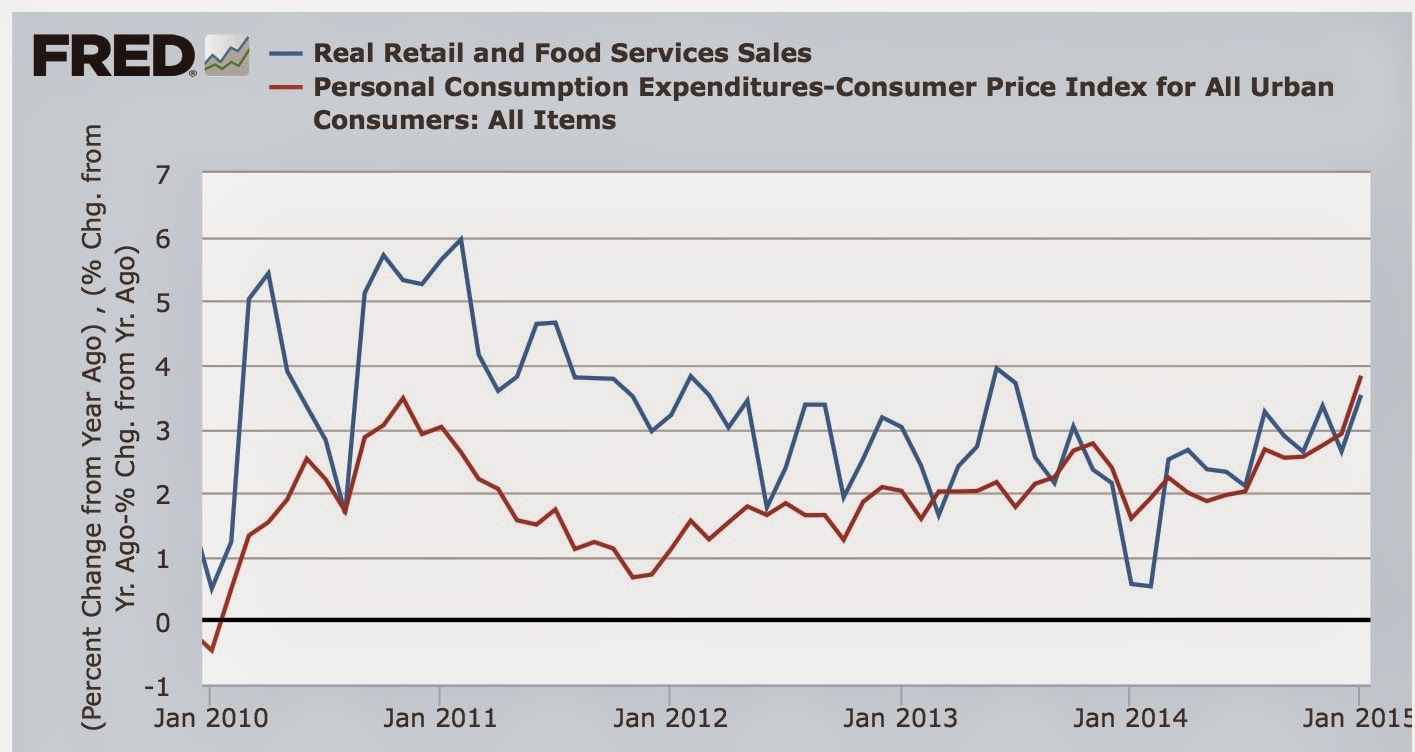 Two trends are apparent.  The first is that PCE growth has generally been approaching,equal to, or slightly greater than real retail sales growth for the past five quarters.  The second is that both are increasing, just as they did in the second half of the 1990s. This supports the notion that the midpoint has been reached, and probably passed, but that a downturn in nowhere near.

The second mid-cycle indicator I want to update is the real personal savings rate. This is, essentially, a measure of economic confidence. How much of their paychecks do consumers feel they need to save over and above the rate of inflation? Here's the answer, going back over 50 years: 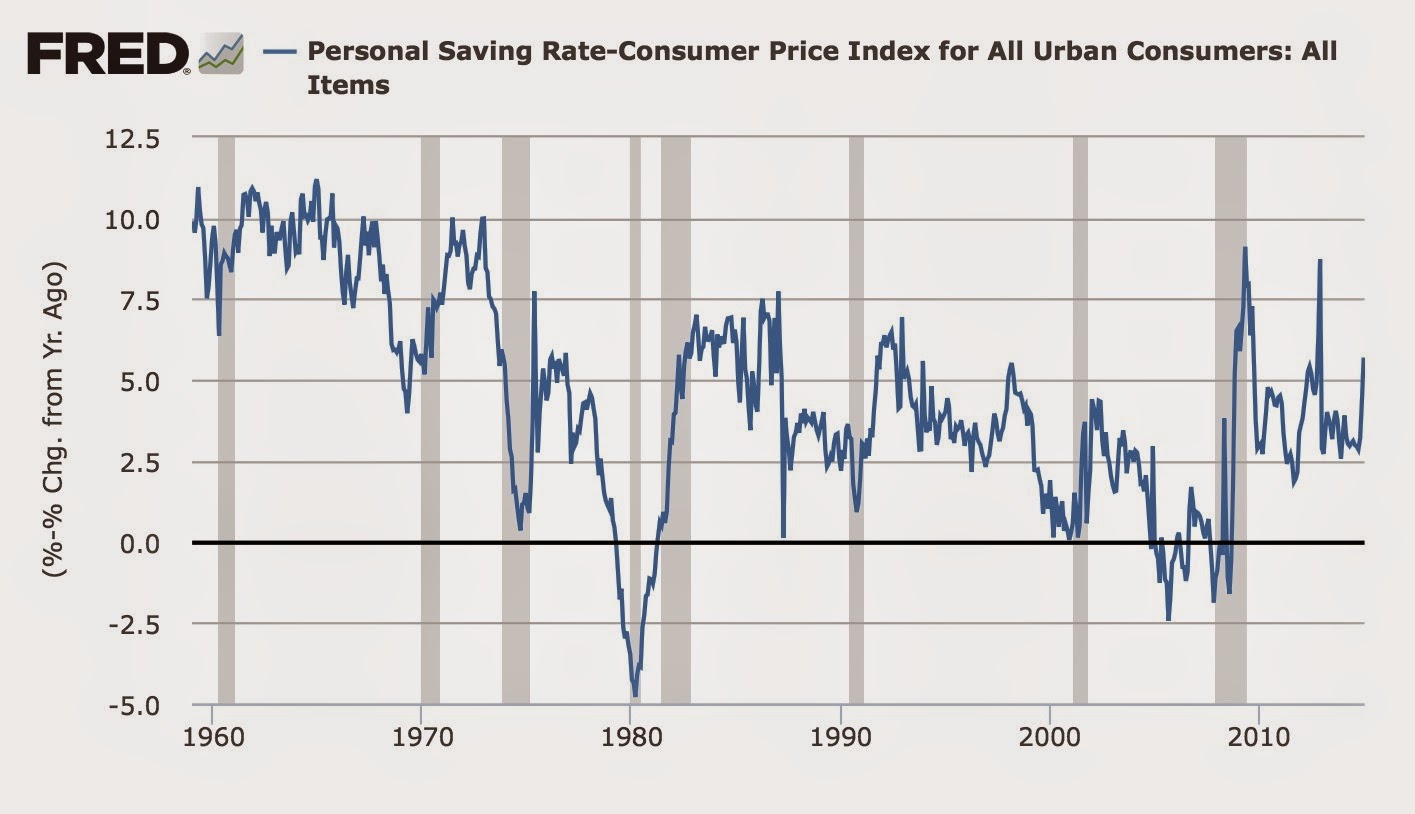 Note that in every single economic expansion except the 1980-81 double-dip, at some point from about the middle to 3/4 mark, there is a steep decline in the real personal savings rate from its peak of about 5%.  Further note that in every single recession, the real personal savings rate increases as consumers seek to buttress their balance sheets.  Generally speaking, as an economic expansion goes on, consumers expose themselves to too much risk, either due to overconfidence, or the need to stretch their finances to keep up.

I do not think we have seen the relevant 5% decline yet, even though it has happened twice during this expansion.  The December 2012 - January 13 decline is an artifact of income shifting due to the fiscal cliff.  The early 2010 decline is too early, and is the result of the big run-up in gas prices after the end of the Great Recession (inflation went up, so the real savings rate went down).

Similarly, I am not concerned by the recent rise in this metric, which is also an artifact of the plunge in gas prices. To show you why, let's compare our current situation with the 1986 and 2006 steep declines in the price of oil and gasoline (red in the graphs below).  First, here's 1986: 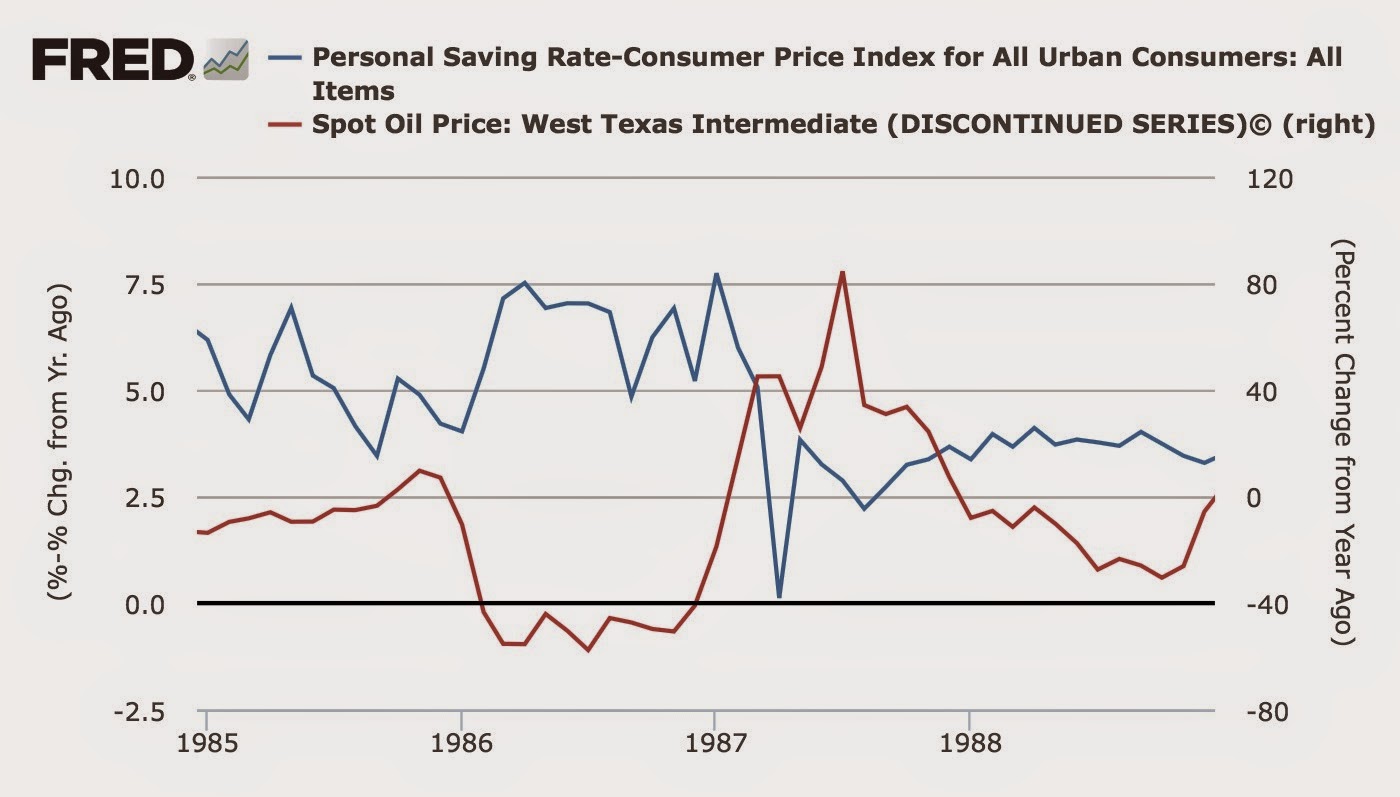 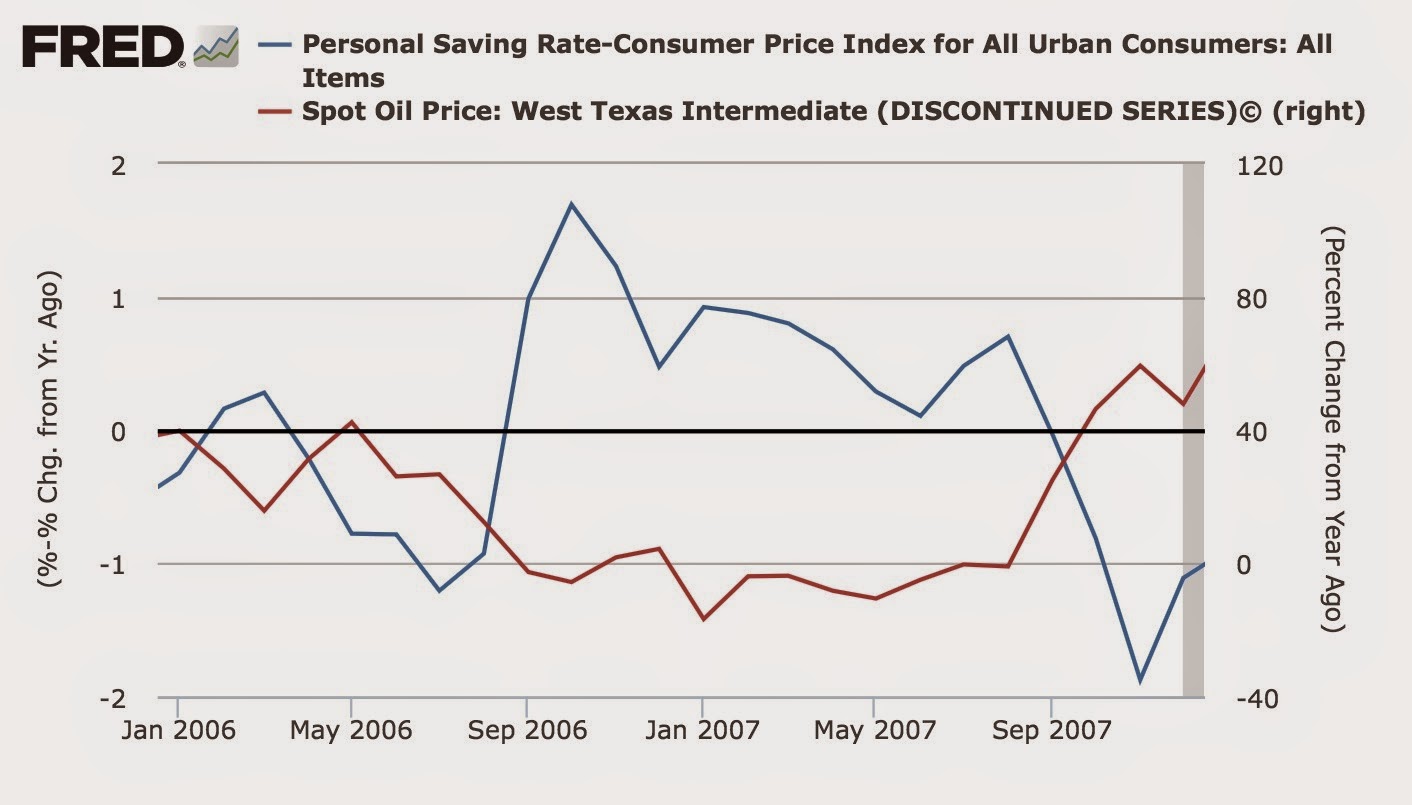 In each case, the initial reaction by consumers was to pocket the savings (for 12 months in 1986, for 3 months and declining thereafter in 2006). That appears to be what has happened in the last few months as well.

To summarize, one mid-cycle indicator looks like it has been reached, the other has not.
Posted by New Deal democrat at 8:00:00 AM

More signs point to a slowdown in Q1 US growth

There are accumulating signs of a slowdown in the US economy this quarter. Not anything like last year's horrible -2.9% quarter, and probably not negative at all, but a real slowdown on the order of only +1% or so annualized growth.
Posted by New Deal democrat at 8:31:00 AM 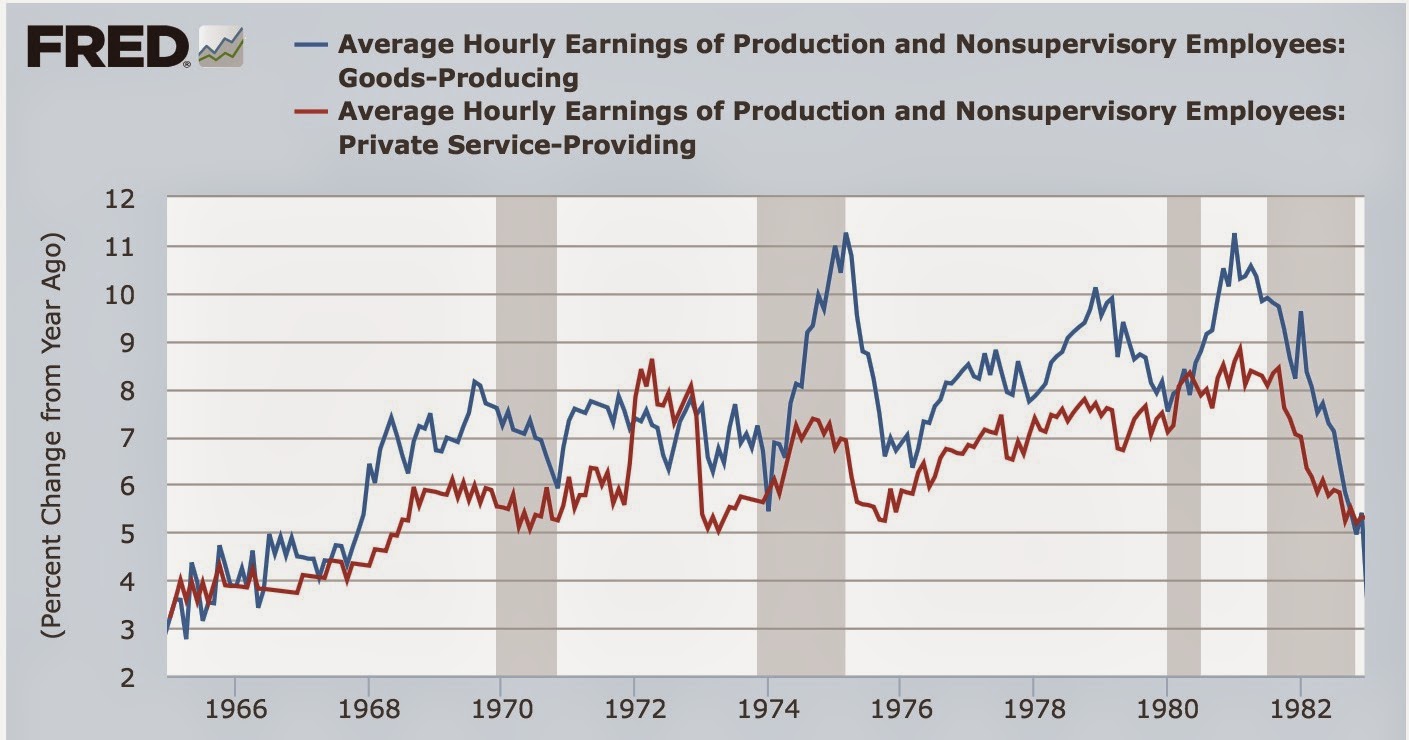 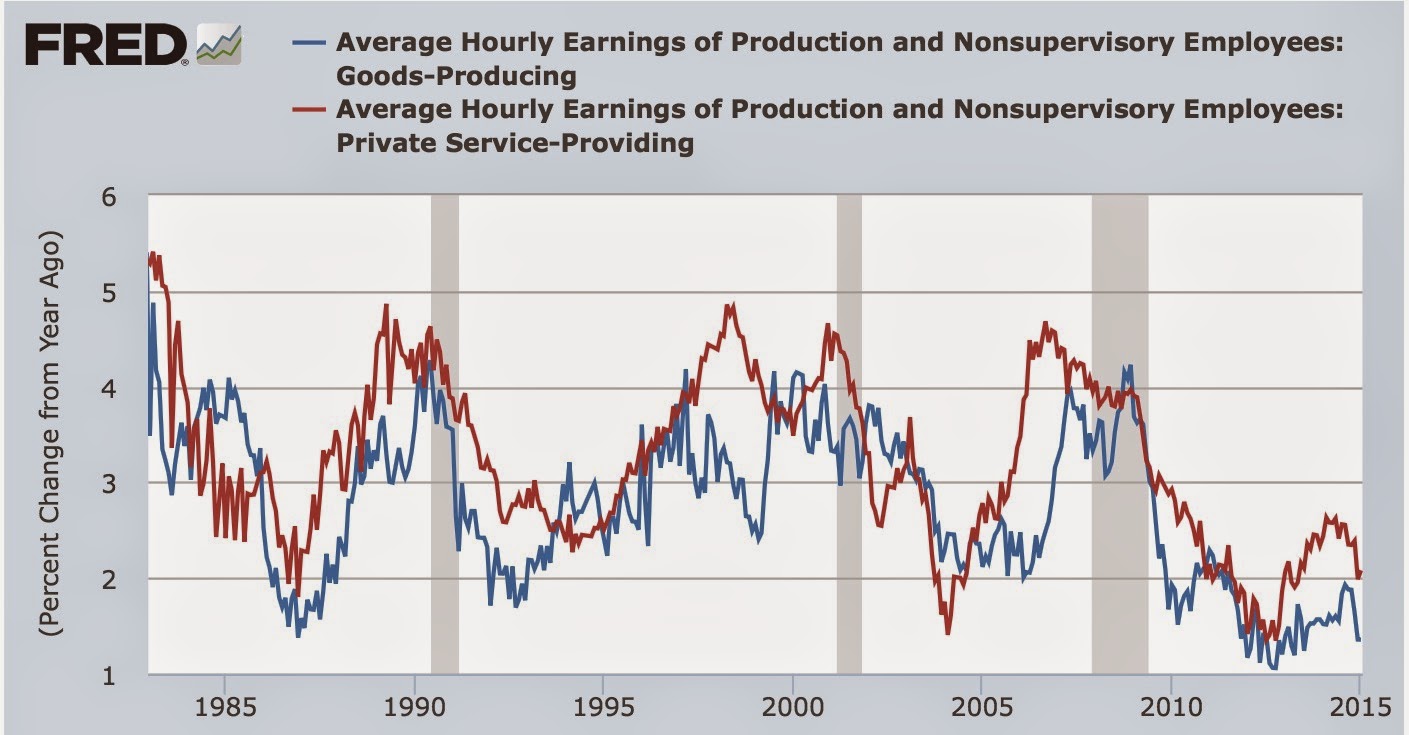 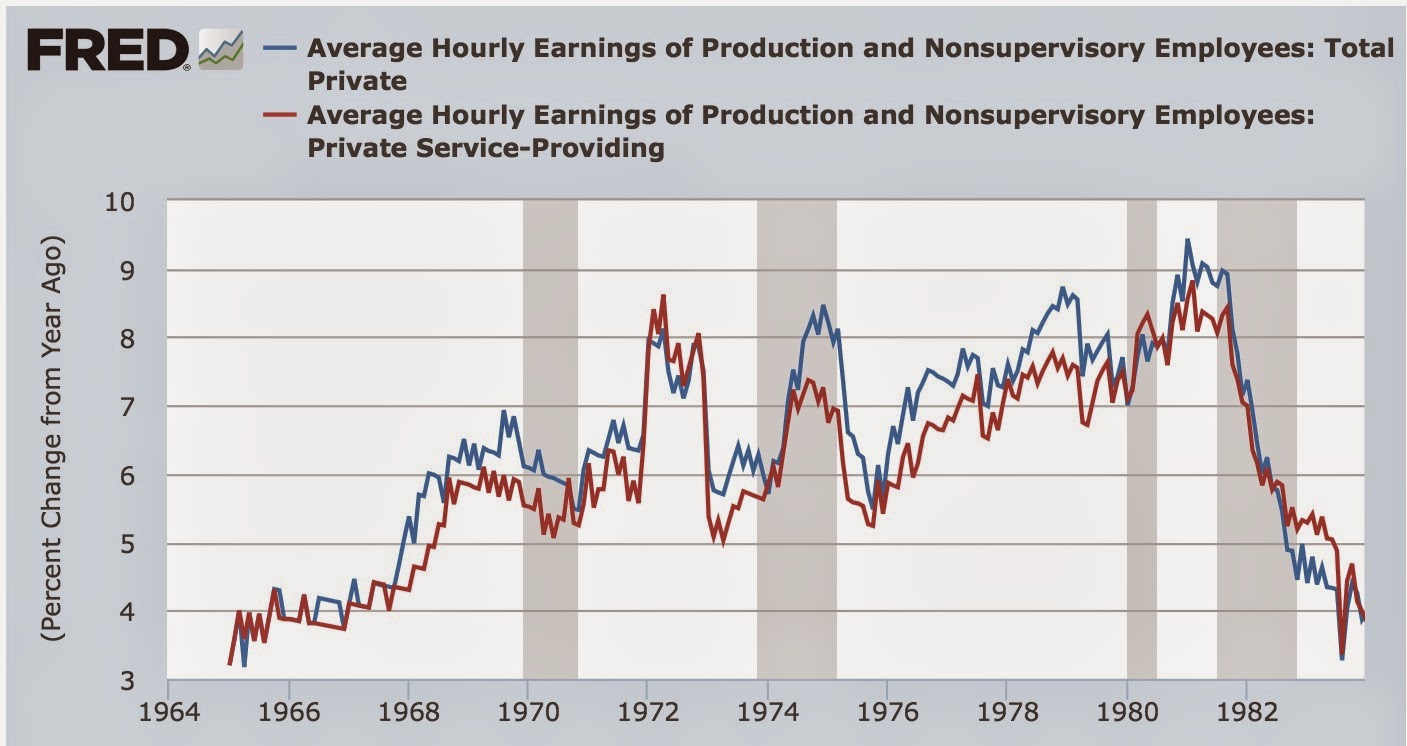 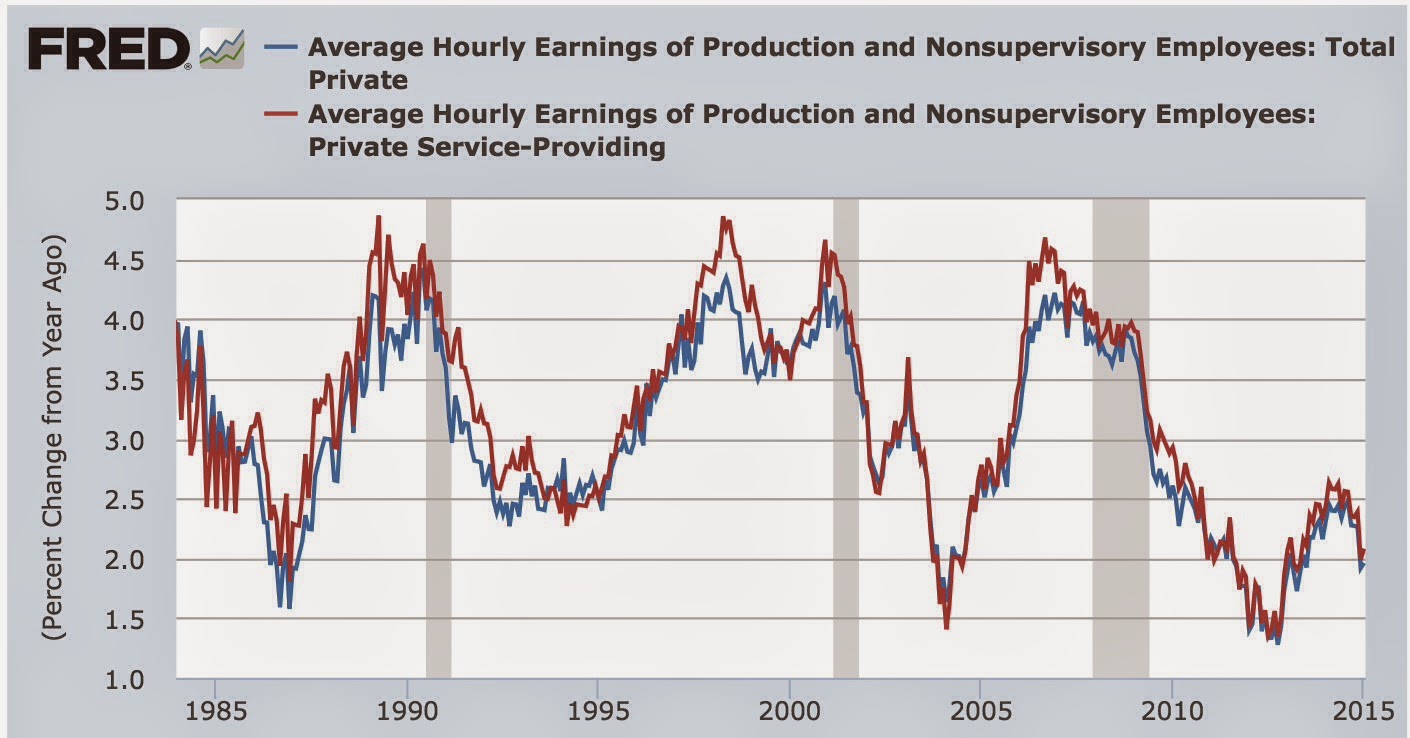 A thought for Sunday: when will Happy Days be Here Again?

My overarching theme about the economic news for the last 5 years is that it has been "positive, but not good enough." Hardly like striking up "Happy Days are Here Again," as claimed by a few Doomers.
But in the last year monthly job creation has run over 200,000, and the unemployment rate has dropped below 6%.  While the economy is by no longer awful, it's really only doing so-so. Involuntary part-time employment, and the number of truly discouraged workers remain high. And wage increases still stink.
So, I thought I would lay out what would really cause me to think the economy was downright good?  I came up with two levels.
First:
If those things happen, the economy is doing pretty good but not great.
Second:
If those things happen, you can begin to strike up the band.

There's a pretty good chance that we pass the first test this year. It's not clear we will ever pass the second in this economic expansion.
And of course, even if the current economy were going like gangbusters, that still wouldn't solve the long-term problems of income inequality and institutionalized barriers to children being able to overcome the US's increased class stratification.
Posted by New Deal democrat at 8:30:00 AM