The US is not in an economic Boom: midyear udpate

At the beginning of this year I asked: Is the US economy going to enter a Boom in 2018?

To recap, there is no standard definition of a Boom. But in my lifetime there have been two occasions when the "good times" feeling was palpable, and the economy was working extremely well on a very broad basis: the 1960s and the late 1990s tech era. During both times,  employment was rampant and average people felt that their situations were going well.

Back in January I identified five markers that, taken together, marked off the two eras as unique: the low unemployment rate, the duration of a very good rate of growth of industrial production, strong growth in real average and real aggregate hourly wages, and increasing inflation.

Let's update all of these through midyear.

First, in both the 1960s and late 1990s, the unemployment rate (note that the U6 underemployment rate wasn't reported in its current configuration until 1994, and so is not helpful), hit 4.5% or below for extended periods of time:

While these weren't the only two periods of low unemployment, they are among those that stand out.

Second, during both the 1960s and 1990s, production grew at or over 4% a year for extended periods of time, not just right after the end of a recession

While the YoY% growth of industrial production has been accelerating this year (up to +3.8% in June), it has still not hit 4%.

The rate of growth of real average earnings for non-managerial employees, both individually and in the aggregate are the third and fourth markers of the two Booms.  In contrast to other expansions, real average hourly earnings also grew at roughly 1% YoY or better:

Meanwhile, real aggregate earnings grew at a rate of 4% YoY or better:

Real average hourly earnings have not grown at all in the past year. Real aggregate earnings are growing at the tepid rate of 2.5%.

The fifth and final  marker of a Boom -- probably as the byproduct of the first four -- is an increase in the YoY rate of inflation:

This has been occurring, although it is probably due more to the price of gas than to any wage pressures.

So far this year, only the first and last markers are present: low unemployment and an increasing YoY inflation rate. But industrial production is not growing as fast as during either of the two Booms, and real wage growth has continued to be lackluster to say the least.

In short, while the production side of US economy is doing pretty well, the consumer side of the economy remains tepid, and in particular wage growth is non-existent. As of midyear 2018, the US economy is not Booming.
Posted by New Deal democrat at 9:21:00 AM

US layoff rate at all time lows


I don't write about new jobless claims much anymore, mainly because it has been boringly good for a few years (outside of hurricane disruptions!).  But there are times like this week when I am particularly thankful that I am concentrating on the one thing - the economy - that is doing unequivocally well.

Back in 2009 and 2010 when I was arguing with the Doomer dead-end recession double-dippers, I used to hear from people who were still in danger of, or worse, had been laid off. I sympathized, and just noted that, however bad things seemed, they had been even worse in 2008 and early 2009, and conditions were still going to improve.

In other words, we have never had a lower *rate* of layoffs for as long as records have been collected:

As of this morning, roughly only 1 in 800 workers is filing a new jobless claim each week.

Occasionally  I still see it noted that the percent of jobs which qualify for filing for unemployment insurance is lower than it used to be. That is true, but the DoL keeps track of that number as well, and we can calculate what the number of initial claims would be normed for  this:

If the same percent of jobs now qualified for unemployment insurance as at any point in the last 50+ years, it would translate into about 270,000 new claims per week -- still a very good number.

So today I will celebrate one unabashedly good thing about the US economy: it is almost unheard of now to get laid off.
Posted by New Deal democrat at 8:15:00 AM 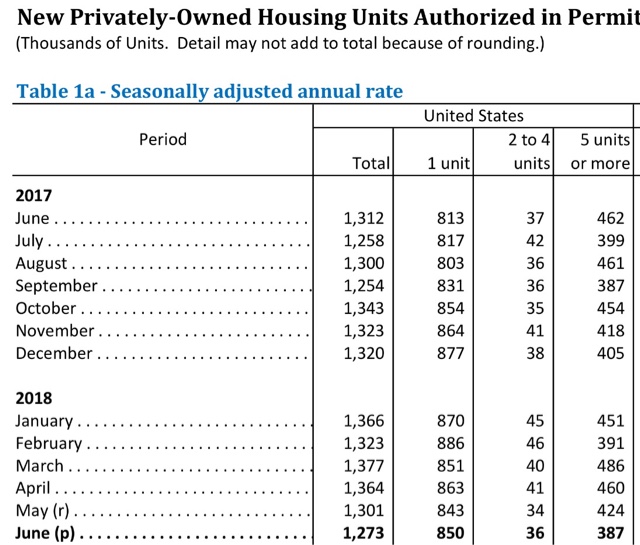 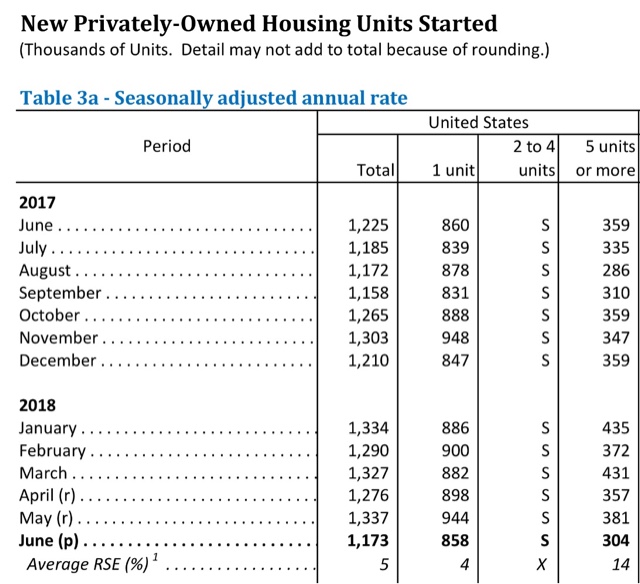 I'm having a hardware issue, so this will be a quick hit. Hopefully sometime tomorrow everything will be back to normal.

Yesterday we had another excellent retail sales number, up +0.4. YoY real retail sales are up +3.7%. Since these sales are a good short leading indicator for employment, that suggests the good monthly jobs readings are likely to continue, at least for a few more months:

This morning industrial production was positive, but with a significant caveat. Production increased +0.6% in June, extending the recent good trend (total is black, manufacturing is red in the graph below): 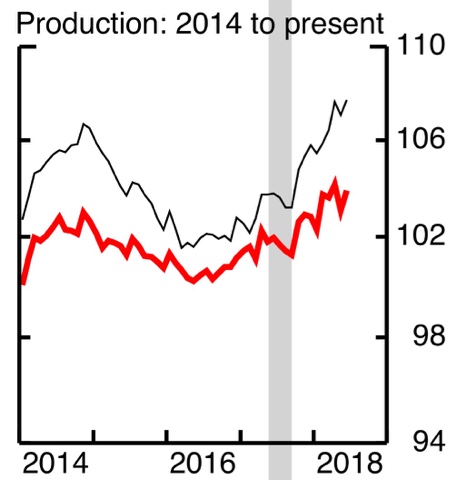 The caveat is that May was revised down by -0.4%, so on net June was up +0.2% over the level as of last month's initial report.

Bottom line: the run of good, positive news continues.
Posted by New Deal democrat at 8:34:00 AM