Weekly Indicators for September 26 - 30 at XE.com

My Weekly Indicators post is up at XE.com. The recent "wobbliness" continues, but with a different cast of characters each week.

On a side note, real life has continued to occupy so much time that my blogging activity has been very limited.  That is likely to continue for 2 or 3 more weeks.  That's a shame, because there are some changes afoot that I would like to share.

In general, while the shallow industrial recession of 2015 did end in about March of this year, the subsequent rebound is proving pretty shaky.  Some Doomish relationships have appeared that should not be disregarded.  I am confident that we are not in a recessioin now, nor is one imminent, but there are more and more signs that make me think that, in terms of baseball, we are maybe in the top of the 8th inning for this expansion.

Today, we have this gem of complete and total ignorance from Ed Morrissey from Hot Air:

The problem occurred when the federal government — spurred by both parties, but starting with Bill Clinton’s administration — attempted to artificially increase demand in home ownership by subsidizing increasingly risky mortgages. That actually started with interventionist regulation: a revision to the Community Reinvestment Act in 1999. That put pressure on banks to expand lending and lower standards for approvals; later, Congress would step up subsidizing such loans through Fannie Mae and Freddie Mac, which then sold the mortgages on the bond markets with the implicit guarantee from the federal government.  That created a huge but artificial increase in demand that drove housing values way up, delinking them from their traditional relationship to the rate of inflation. Suddenly lots of people saw their equity as an ATM, so consumer spending rapidly increased, and politicians of both parties took credit for great economies and rising home ownership.

This analysis has been debunked numerous times.  The latest is from Barry over at the Big Picture. Barry offers detailed and nuanced analysis, which means it's already far above Ed "I ran a call center so I'm qualified to write about economics" Morrissey's head.  If you're really interested, you can search Barry's site for "CRA;" he's taken this meme down several times.

Ed's an economic idiot; he keeps trying to write something of substance, only to prove on a regular basis that those who ran call centers aren't qualified to write about economics.

Here's the key point for me: 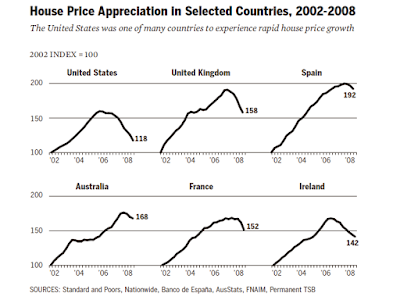 The housing bubble was global.  So either the CRA somehow caused all these other countries to engage in risky lending, or something else was going on. 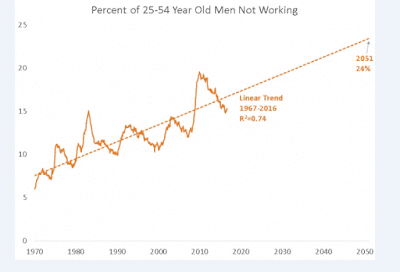 1-Year Chart of the XLI 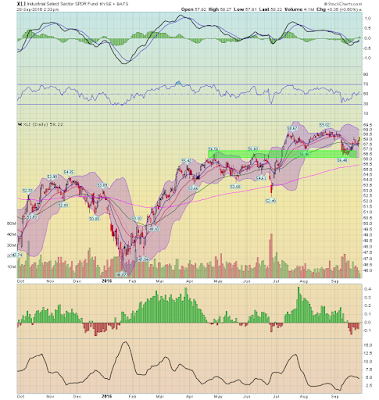 Italy has downgraded its economic forecasts, presenting the country with a worse fiscal outlook than expected and limiting prime minister Matteo Renzi’s chances of proposing a big economic stimulus before the December referendum that will determine his fate.

The Italian cabinet approved the new projections overnight, slashing its estimate for gross domestic product growth this year to 0.8 per cent from a pace of 1.2 per cent predicted in April. Next year, Rome is expecting growth of 1 per cent, compared with a previous estimate of 1.4 per cent.

1-Year Chart of the EWI 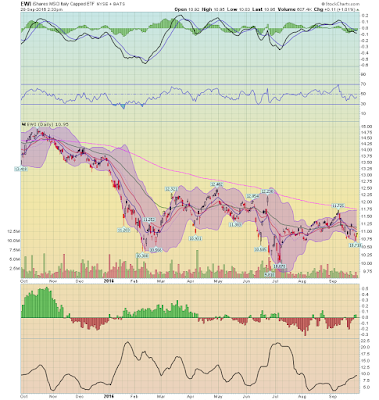 
Brexit's Impact on U.S. Will be Small 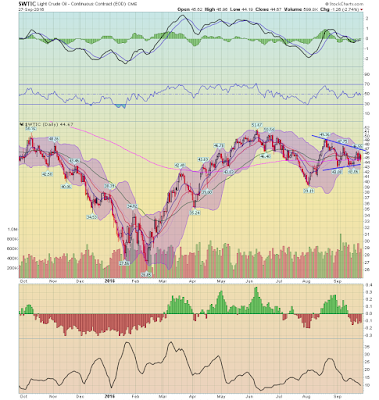 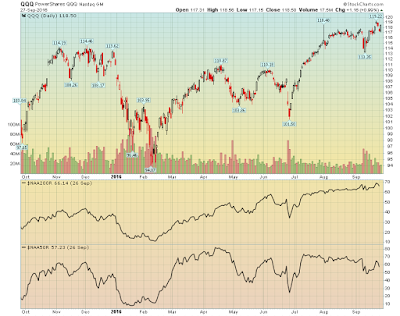 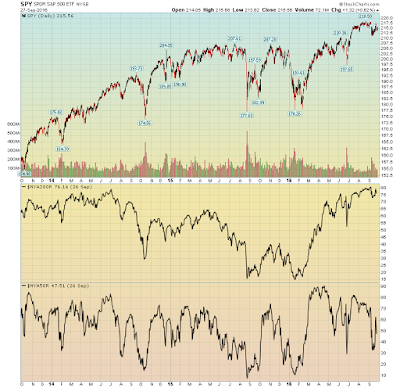 1-Year Chart of the XHB ETF 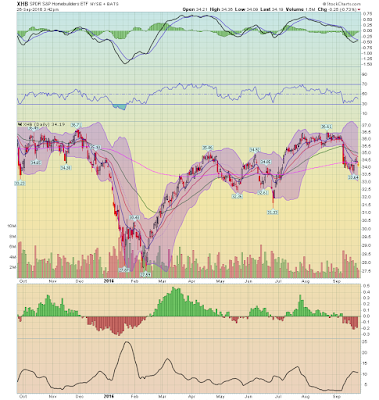 Mario Draghi on the Pros and Cons of the EU Outlook

On the positive side, incoming information continues to point to the euro area economy being resilient to global and political uncertainty, notably following the UK referendum outcome. The initial impact of the vote has been contained and the strong financial market reactions, such as equity price falls, have largely reversed.

At the same time, the substantial weakening of the foreign demand outlook since June is expected to dampen export growth. Along with other factors, it will continue to pose downside risks to the euro area’s growth prospects. According to the September ECB staff macroeconomic projections, annual real GDP growth is expected to increase by 1.7% this year, and by 1.6% in each of the next two years.

Over the past few years, the rate of global trade growth has halved relative to the pre-crisis period, and it declined further in recent quarters, with the weakness concentrated in Asia. While low investment has played a role, rebalancing in China and a reversal in the development of global value chains could signal permanently lower trade growth, leading to weaker productivity growth. Lack of progress – together with some backtracking – on the opening of global markets to trade has added to the slowdown.

The first point is that, during the three years since the introduction of QQE, Japan's economic activity and prices, as well as financial conditions, have improved substantially, and Japan's economy is no longer in deflation.

The second point is that, despite such a positive turnaround, the price stability target of 2 percent has not been achieved.

The Bank has come to the conclusion that it can facilitate the formation of a yield curve, which is deemed most appropriate for achieving the price stability target of 2 percent, through the appropriate combination of a negative interest rate and JGB purchases.

The fourth point is the impact of monetary easing on the functioning of financial intermediation...Although the direct impact of these developments on economic activity as a whole is unlikely to be substantial, it is possible that such developments can cause uncertainty regarding the sustainability of the financial functioning in a broad sense, in that they could have a negative impact on economic activity through a deterioration in people's confidence. In facilitating the formation of an appropriate yield curve, the Bank should take account of these points.

Economic indicators released in August and September have been mixed. Consumption spending got off to a strong start in the third quarter, and employment growth slowed but remains solid. However, the more timely purchasing managers’ surveys were unusually downbeat. Still, forward-looking indicators and professional forecasts point to stronger growth in the second half of the year. Inflation remains muted and below the Federal Reserve’s target rate of 2 percent, with goods and services inflation exhibiting differing trends.
Posted by Unknown at 6:00:00 AM

Today, Little Stevie Hayward of Powerline has a post up titled, "Don't Look Now, But."  It's his usual cut and paste job masquerading as economic analysis.  He first points to the weak state of corporate earnings, noting they are headed for another decline.   But, it's obvious that he has no idea what's behind this number.  The big issue is weak oil company revenues.  Consider this chart from Factset.com: 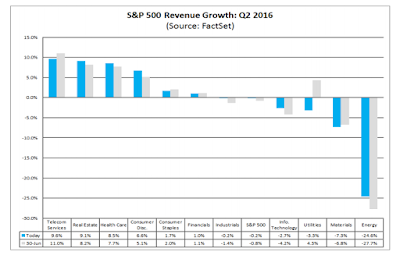 Notice the very large drop in energy revenues.  China's switch from a manufacturing economy to one driven by consumer demand is another cause (Stevie might want to take a look at information from the RBA -- that's Reserve Bank of Australia -- for context).  In fact, 7 industries reported positive earnings growth.  So, this isn't exactly the Armageddon he's predicting.

He then notes the China and Japan are selling treasuries.  Let's place that move in context.  Here's a chart of the 30-year treasury yield for the last 30+ years:

Interest rates have been declining for the last 40 years.  There's a lot of reasons for this.  To get caught up on that, read Bernanke's Global Savings Glut theory or Larry Summers Secular Stagnation argument.  Which little Stevie Hayward won't do, because it uses big words and contains math.
I realize that criticizing Little Stevie Hayward of Powerline is like shooting fish in a barrel.  He's that stupid.  But, so long as he keeps writing, I'll keep pointing out how incredibly stupid he is.

All things being equal, lower mortgage rates typically translate into increase new home sales -- and even though August was a decrease from July, in 2016 that relationship is holding fast and is the most positive aspect of the important and leading housing market.

Weekly Performance of US Sectors

RRG Chart for US Industries 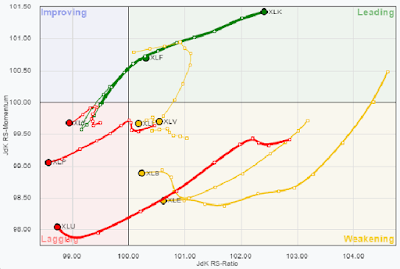 1-Year Chart of the XLKs 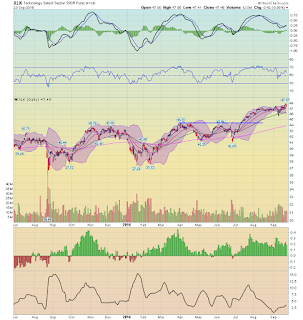 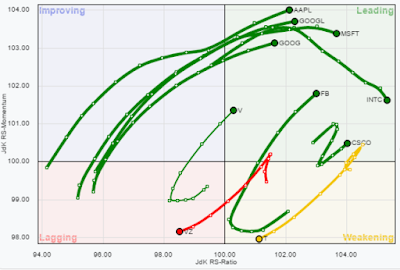 1-Year Chart of the XLFs 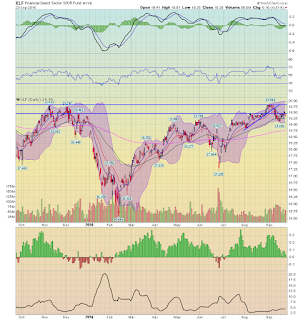 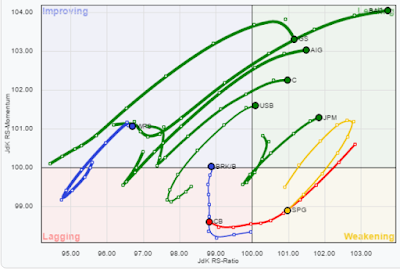 US Equity Market Week in Review
Posted by Unknown at 4:29:00 PM

Steve Hayward of Powerline Continues to Be an Economic Jackass

Today, Steve Hayward of Powerline wrote a blog post titled, The Economy in Pictures.  He uses a whopping 4 graphs to argue that the economy is near a recession.  You can stop laughing now.

Over at XE.com I have a post that uses 18 different indicators -- and these are indicators that have a long track record of being accurate predictors of economic activity -- to argue that we're still looking at a modestly growing economy.

Once again, we have Steve Hayward proving that he's an economic jackass of the highest order. But on a good note, we can also start to argue that he's a great contrary indicator: do the exact opposite of what he does and you'll make out like a bandit in the market.