The last of the 4 monthly coincident markers for whether the economy is in recession vs. expansion was reported this morning for April. Let’s take a look.

In nominal terms, personal income declined -13.1%, taking back most, not by no means all, of March’s big 20.7% gain. After taking inflation into account, in real terms it declined -13.7%. Meanwhile nominal personal spending increased 0.5%, but in real terms declined -0.1%, barely touching March’s 4.0% gain:

An issue came up at Seeking Alpha about why I believe that demand-driven inflation will be transitory. The above graph shows why. After 2020’s big stimulus package, real personal spending increased sharply and then the effect completely dissipated over a few months. It appears that the same is already happening this year. Which would only leave supply-side temporary bottlenecks in production as sources of continued inflation.
Below I’ve take then same data as above and normed both to 100 as of February 2020:

Both real income and spending are above their pre-recession levels. Simply put, in this crisis decisive action by the government to put cash in consumers’ hands has worked.
But the “official” recession vs. expansion metric is real personal income less transfer receipts (things like unemployment insurance), shown below:

This too is now above its pre-recession levels. Although I won’t post a graph, this joins real sales making up all of its lost recession ground. But the two most important metrics - industrial production and employment - still have a ways to go.

New jobless claims continue to decline at rate of 100,000 per month, while continued claims stall at elevated level

We have hit my objective for new claims to be under 500,000 by Memorial Day. Even better, we are already approaching my second objective, which is for them to be below 400,000 by Labor Day.

REMINDER: Because of the unprecedented number of layoffs during the early lockdowns, for the last year I have given heightened importance to the non-seasonally adjusted numbers. After May is over, their importance recedes and I expect to discontinue tracking them.

In the past 3 months, claims have trended down an average of roughly 100,000 per month. If this continues for just 1 more month, new claims will be at levels which in the past have been consistent with full or nearly full employment deep into expansions. At their current level, claims are consistent with being very early in a recovery in the past:

The long term perspective again shows that these are equivalent to the worst levels of most previous recessions, versus at 2,000,000 or below during strong expansions:

As I wrote last week, March’s employment gains may have been more of an outlier than April’s. If we simply averaged the 2 months together that would be an average jobs gain of 518,000, then the continued big decline in initial claims would give us a May jobs gain of over 500,000 when that report is issued next Friday.
I continue to think initial jobless claims will continue their recent strong decline, while the failure of continuing claims to make meaningful new lows in the past 2 months is a genuine concern that the pace of new hiring has not been picking up.
Posted by New Deal democrat at 8:04:00 AM

Now that we have all of the April housing data, my comprehensive look at this long leading sector is up at Seeking Alpha.

It’s pretty clear that sales and new construction have peaked in the short term. So, what happens when all of those people who would have put their houses on the market in 2020, but didn’t because of the coronavirus, decide to put them on the market later in 2021 or in spring 2022?

As usual, clicking over and reading puts a penny or two in my pocket to reward me for my efforts.

This morning both new home sales and two price indexes for houses were released for April, completing our view of that important long leading sector.

As anticipated, not only did new home sales decline for the month, but March was also hugely revised to the downside ( over 10%!): 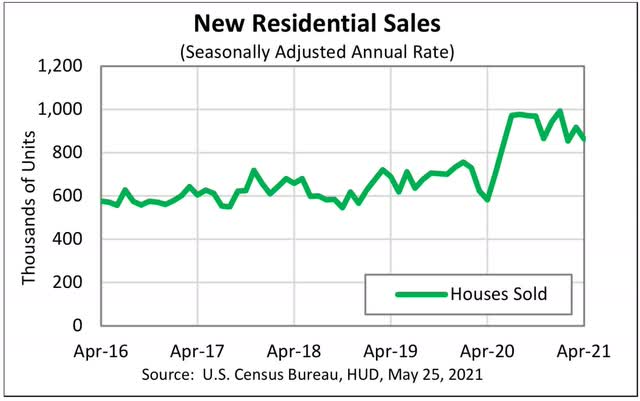 With these revisions, the peak for new home sales becomes the December-January period, exactly as is the case for housing permits, starts, and existing home sales.
But if sales are down, prices are continuing to skyrocket:

As measured by the FHFA, prices increased 1.4% seasonally adjusted just in the past month! YoY they are up 13.9%.  For the Case Shiller national index, the monthly change was +2.0%, and the YoY change was +13.2%.
Housing inventory is increasing again, up about 3% m/m and now only down about 2% YoY, vs. a trough of being down over 12% YoY.
I’ll have more later at Seeking Alpha. 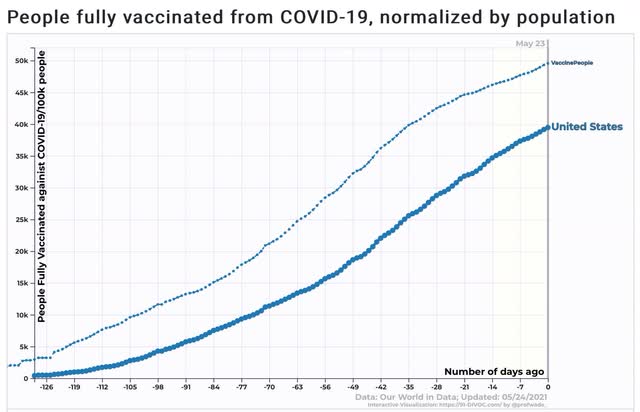 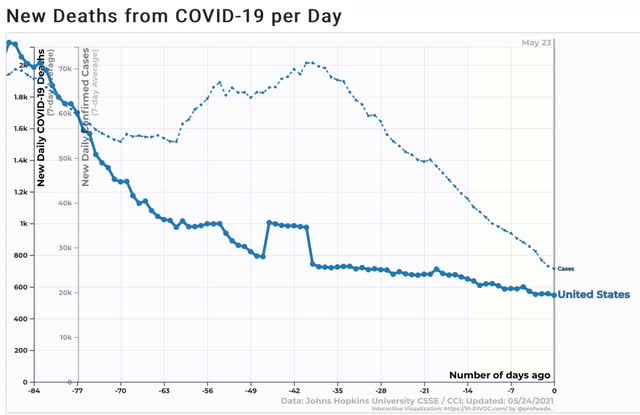 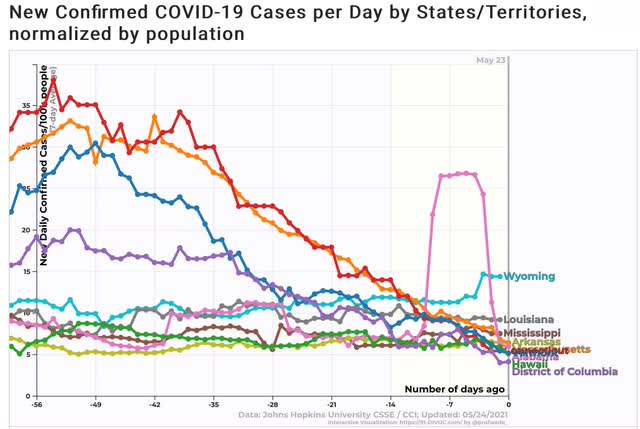