My Weekly Indicators post is up at XE.com.  This week it is pretty self-explanatory.  Nearly all short leading and coincident indicators are positive.
Posted by New Deal democrat at 8:49:00 AM


We've had a good run of economic news this week.

First, in the leading housing sector, both of the most important datapoints made new highs.  Single family permits, which are just as leading as permits overall, but much less volatile, made yet another post-recession high.  Further, the three month rolling average of housing starts, which are more volatile and a little less leading, but represent actual economic activity, also made a new post-recession high:

The headline number for industrial production for February was flat, but once again that was due to the seasonally-adjusted big decline in utility production due to a very warm February (sure glad that global warming is a hoax perpetrated by the international scientific community).  Manufacturing output rose to another new post-recession high (although, to be fair, still below its peak from one decade ago), and mining output continues its big bounce off last year's bottom:

Finally, for once we got a truly good JOLTS report (for January), showing that the quits rate rose to a post-recession high that also equalled its high (save for one month)  during the Bush expansion:

and actual hires (as opposed to the overrated and somewhat fictitious openings) also rose, although not quite to a new post-recession high:

Not perfect, but really good news on a number of fronts representative of the Indian Summer of this expansion.
Posted by New Deal democrat at 9:00:00 AM

What is my favorite indicator, real retail sales, forecasting now?

Real retails sales carries a lot of information about various other aspects of the economy, which is why it is my favorite single metric.

To find out what it is portending now, click on over to XE.com.
Posted by New Deal democrat at 9:43:00 AM

Yesterday I wrote about where we stand in the labor market cycle. I noted that I anticipate that nominal wage growth will accelerate at least some.

But that doesn't apply to real wages, as to which today we got some important and depressing information.  Even though consumer inflation only rose a little over +0.1% in February, nominal wages for nonsupervisory workers only rose a little under +0.2%, so real wages remain -0.6% below their peak last July:

Measured YoY, real wages have actually declined for the second month in a row:

In short, wages haven't been helping out average American workers at all for over half a year.

That doesn't mean that those same workers will cut back on consumption, as we can see when we take the YoY graph back to 1983:

In the 1980s and early 1990s, even though real wages were relentlessly declining, households were able to spend more due to declining interest rates, and the entry of spouses into the labor force.  More significantly, consumption also increased in the 2003-5 period because of the housing bubble, as many people tapped into the rising equity in their houses.

I had hoped this latter period would have been burned into everyone's psyche -- and the subject of strict regulation -- but apparently not, for as Bill McBride informs us, home equity withdrawals increased again in the first quarter of this year: 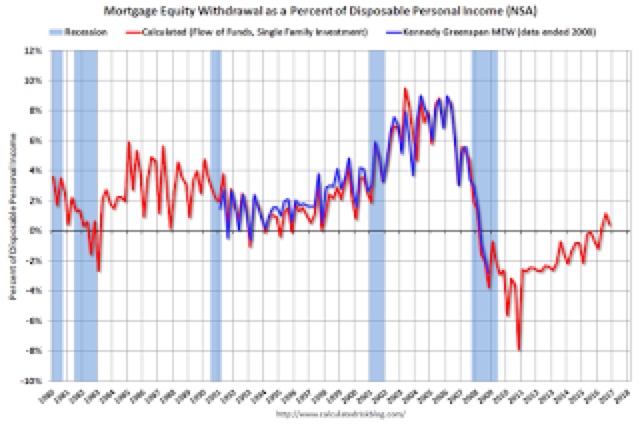 Declining interest rates are no longer supporting spending. That the "housing MAC" is being tapped again is dangerous.
Posted by New Deal democrat at 8:39:00 AM

Where are we in the labor market cycle?

In keeping with my big focus on jobs and wages for average Americans, let's take a look at the progression of the labor market over the last few cycles.  In most of the following graphs, the underemployment rate, U6, which was first reported in 1994, is in red, inverted, right scale.

First, while a common mistake is to think that jobs lead consumption, in fact the reverse is true.  Real retail sales (blue, left scale) lead jobs:

As I have shown many times over the last few years, nominal wage growth typically has not begun to accelerate until the underemployment rate falls below about 10%:

Typically the labor force participation rate does not begin to climb until after the underemployment situation has started to abate:

Finally, at least in the last several cycles since the secular surge of women entering the labor force, wages for nonsupervisory workers have started to accelerate before the participation rate for prime age workers turned up:

Since housing and retail sales have continued to rise, I anticipate that uneremployment will continue to decline, and jobs, nominal wages, and the prime age participation rate will continue to increase.
Posted by New Deal democrat at 9:49:00 AM

The unemployment rate, at 4.7%, is generally acknowledged to be decent, although not great.  But what of the underemployed?

Typically as an economy expands, the U6 (unemployed + underemployed) rate has declined more than the U3 (unemployed only) rate, as shown on the below graph which subtracts U3 from U6, thus leaving us with just the underemployed:

As the recovery matures, the two move in tandem.  As the economy weakens into a recession, the underemployed tend to feel it fist, as U6 increases more than U3.

So the good news for now is that U6 is still declining more than U3.

Let's take a look at several categories of the "underemployed."  First, here are people who are part-time for economic reasons (i.e., they would like a full-time job):

This last made a new low several months ago.  When we look at the YoY change, we can see that the decline has been decelerating:

This may be just noise, or it may be the first sign of a maturing jobs expansion.

Next, here are those who are not in the labor force at all, but want a job now:

This just made a new low in last week's report.  Note the spike higher following Congress's termination of extended unemployment benefits at the end of 2013.   Here is the YoY change:

All in all, this is continuing good news. The number of underemployed continues to improve relative to the unemployed, the sign of an economy that is continuing to improve. There are some signs in deceleration in that improvement, but not of a mature expansion that is on the cusp of rolling over.

A thought for Sunday: for now the economy remains on automatic pilot --and that's good

How much, if any, of the economy, has been influenced by the Trump/Ryan GOP government in Washington to date?  With one exception, not much I think.

First of all, while the jobs report was certainly good, was no better than the average report from 2014 or 2015 -- or 4 of the last 8 months, for that matter:

And it wasn't just foreseeable, it was forecast.  For the last 10 years, the nonpartisan Conference Board has published a monthly "Employment Trends Index," an index of leading indicators for jobs.  Here's what it looked like as of Friday: 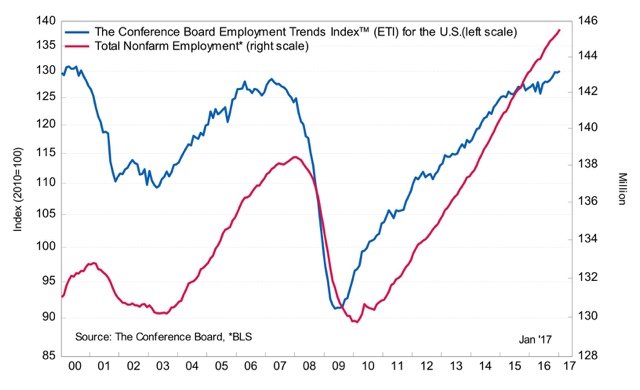 Notice that there was a jump in the leading index beginning last summer. In the last few months we have seen those leading components feed through into actual job creation.

You know, the leading indicators really do lead, and I've been writing about the economy entering a period of "Indian Summer" for about half a year now.

Secondly, now that the Trump/Ryan regime is halfway through their "first 100 days," what economic policies of any significance have been enacted?  The answer is, none.  All of the Executive Orders have primarily impacted immigration and border controls. No legislation of note has landed on Trump's desk.

The ACA funding repeal hasn't been enacted yet, and may not ever make it through Congress, in particular, the Senate.  Even if it does, while the consequences will be enormous over the next few years, there won't be any immediate economic impact, as increased premiums for older citizens counterbalance the end of the individual mandate, and the unraveling of the marketplace will not only take time, but it won't be until the millions more uninsured start showing up in emergency rooms of  hospitals that the effects are really felt.

So, for now the economy remains on automatic pilot, just as it has been at least since the end of 2014.  And the underlying conditions remain favorable for the next 6 - 12 months.

Finally, there is one exception, where the election appears to have made a difference.  Here is a graph from Bloomberg that confirms what Gallup has been showing since November: while Democrats' economic confidence has declined somewhat -- but only back to it lows for the last couple of years -- GOPers' confidence has surged higher: 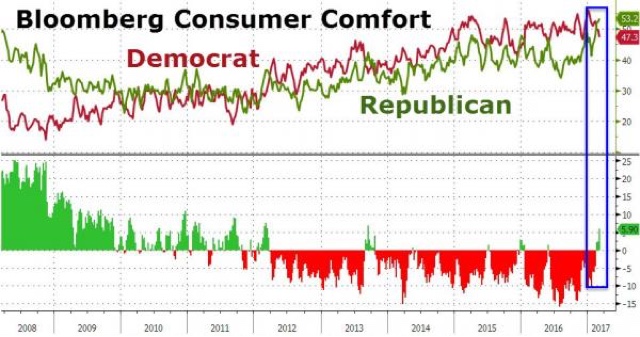 That continues to translate into very good readings -- over 10% higher YoY -- in Gallup's daily consumer spending metric (yes, correlation is not causation, but I am unable to think of any other cause): 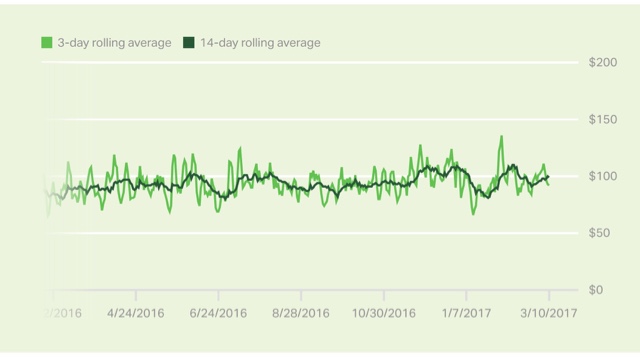 Given the propensity to save vs. spend, I do not believe that redistribution of income and wealth higher is going to have anything other than bad effects over the longer term as measured by the next few years.  Thousands of people will needlessly die because of the implosion of the health care marketplace. When the next downturn inevitably comes, the Trump/Ryan regime will have no effective palliatives, and no desire to alleviate suffering in any event. And all hell is likely to break loose when the US debt ceiling needs to be raised in a few months.  There are no signs that the House extreme right-wing "Freedom Caucus" is going to change their implacable opposition, and there is no incentive whatsoever for the Democrats to bail the GOP out.

But that is over the next 2 - 4 years.  For now, automatic pilot means continued job gains and nominal wage growth.
Posted by New Deal democrat at 9:01:00 AM