My last Weekly Indicators post of the year is up at Seeking Alpha.

The producer side of the economy seems to be worsening, while initial jobless claims suggest some weakness is spreading over to the consumer side.

As usual, clicking over and reading helps reward me a little bit for the effort I put in.
Posted by New Deal democrat at 8:39:00 AM

Marking my 2019 forecast to market

One of the things I do at the end of every year, in the interest of transparency, is to go back and see how my 6 and 12 month forecasts for the year panned out.

So how did I do this year? Not perfect, but not too shabby either. I marked to forecasts to market Over at Seeking Alpha.

As usual, clicking over and reading puts a penny or two in my pocket for my efforts.
Posted by New Deal democrat at 8:34:00 AM

I’ll be traveling and enjoying the holiday for a few days, so ... light to non-existent posting!

In the meantime, three quick hits for you:

Since Boeing is part of the economy, this is just more bad news for the short leading manufacturing sector.

3. Trucking falls off a cliff in November - the ATA Trucking Index fell -3.5%: 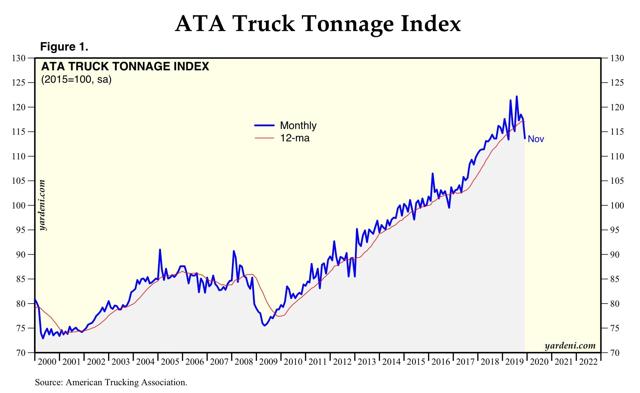 The accompanying note says “there is no way to sugar-coat this.” This is the worst move except for late 2012 since the Great Recession. Since this is a coincident indicator, this is more evidence that a shallow industrial recession has already begun.

The auto and truck sales report in the beginning of January will be very important to see if this is spreading out to the consumer.

A roadmap to a Democratic Senate supermajority


A worthy criticism made by many observers on the Democratic side is that most of the plans being painstakingly described by the Presidential candidates will come to nothing, because the filibuster in the Senate will kill them all. The GOP will then run on the “do nothing” socialist democrats in 2022 and 2024 to retake the Congress and Presidency. As things now stand, that is a reasonable position.

Bear in mind the Mitch McConnell and the GOP are perfectly happy with a Senate that still employs a filibuster for legislation: they don’t want to pass any! Seriously, when was the last time you heard a GOPer tout any sort of legislation at all? Now that the GOP has packed the courts (full of judges who will overrule any progressive legislation put in place since, oh, 1866), they have no incentive to allow any movement of legislation at all. The only change is that they will instantaneously revert to deficit scolds who bemoan that Social Security and Medicare are killing us fiscally, at roughly 12:01 pm on January 20, 2021.

So, are we helpless in the face of a rural-State packed filibuster-proof GOP Senate? It’s a definite uphill climb, but I don’t think so.

Here’s the interesting thing. If you want to flip a Senate seat, the most efficient use of resources is in a *small* State, since flipping just 100,000 or 200,000 votes there makes all the difference, and the media markets - and their expenses - are a lot cheaper. With that in mind, I took a look at the 2018 Congressional results to see if I could identify 30 States where the Democrats might, admittedly with lots and lots of effort, elect Senators. I came up with 32, 5 of which are smaller states where a relatively small shift can make all the difference.

The 32 States where Democrats might make a Senate supermajority fall into 5 categories: blue bastions, defensive holds in the rustbelt (plus Iowa), booming sunbelt states on the cusp of turning, two Southern stretches, and rural states with exurban metropolitan bleed-over. 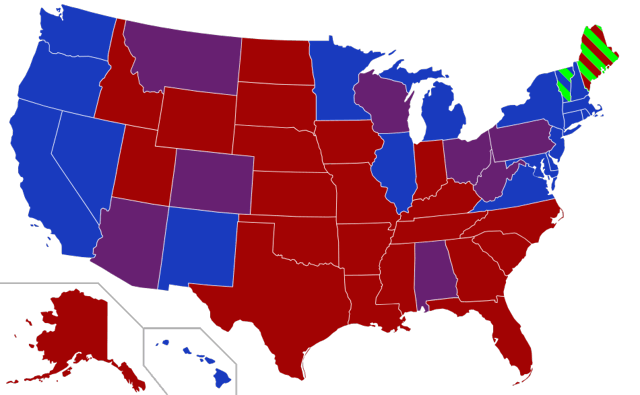 Now, I disagree with Nate’s map with regard to one State: North Carolina, where he deleted the results from a district where the Democrat didn’t have a GOP challenger. Had those results been included, and also giving the GOP a similar vote total as the other Democratic-stacked districts, the Democrat total would be 52%.

But let’s get to the 5 categories:

These are the 20 States that went for HIllary Clinton in 2016: the West Coast plus Nevada, the Eastern seaboard from Maine through Virginia, plus Illinois, Minnesota, Colorado, New Mexico, and Hawaii. I’ll have more to say about Maine later, but for now note that these States are the start.

2. Defensive holds in the rustbelt

These are the traditional “blue wall” States of the upper Midwest that defected to Trump in 2016: Michigan, Wisconsin, and Ohio. Michigan looks like it has returned to the fold. Wisconsin is on knife’s edge, and Ohio is a tougher sell (but note, it does have one Democratic Senator now). An economically progressive Democrat in the mold of Elizabeth Warren should do well in these States.

I’m also including Iowa in this list because it is Midwestern, has historically elected some Democrats, has traditionally responded to an economic populist message, and is showing up “blue” in most of the 2020 Presidential polling.

OK, that’s the defensive part of the plan, adding up to 25 States. The last 7 are a stretch of one sort or another, but there appear to be paths to victory.

As shown on the map above, in 2018 Florida voted Democratic in the Congressional races. As I’ve already mentioned, in actuality so did North Carolina. Since Senate seats are statewide and so can’t be gerrymandered, if Democrats duplicate those 2018 results in Senate races, these States flip.

Georgia came excruciatingly close in 2018 to electing a Democratic governor, and probably would have were it not for racially based voter suppression. In 2016, Trump won Georgia by only 5%. This is a State that is well worth putting more effort into.

The same goes for Texas. In 2018, Beto O’Rourke came within 2% of winning the Senate race. In 2016 Trump won by 9%. We know that demographically Texas is close to becoming a “minority majority” State. As of 2017, the GOP only led in voter registrations by 3%.

OK these are GOP bastions. But in 2018 the democrats got over 40% of the vote in each State. Mainly these States break down on racial lines. But in South Carolina there is a little “relocated yankee” action going on in both the northwestern corner of the State, in the Greenville-Spartanburg area, and in the Myrtle Beach, Charleston, and Hilton Head Island areas on the coast. Driving better turnout in the African American areas, and building up an organization in the areas where northerners have moved, and especially identifying and involving socially liberal retirees on the coast, might put a good candidate over the top, if not in 2020, then maybe in 2022 or 2024.

Mississippi is a further stretch, but the base is there. In 2018 Democratic Congressional candidates received 42.5% of the vote, trailing the GOP by only 8% (third party candidates took 8%). This is one of the few States where the GOP won that Democrats got over 40% of the vote. With a good candidate, and probably with a poor GOP candidate in opposition, Mississippi is in the ballpark.

All three of these States include declining rural areas, and small patches of fast-growing exurbs of metropolitan areas.

In Maine it is the southeast corner that is within the exurbs of Boston. Here is a county map of the State: 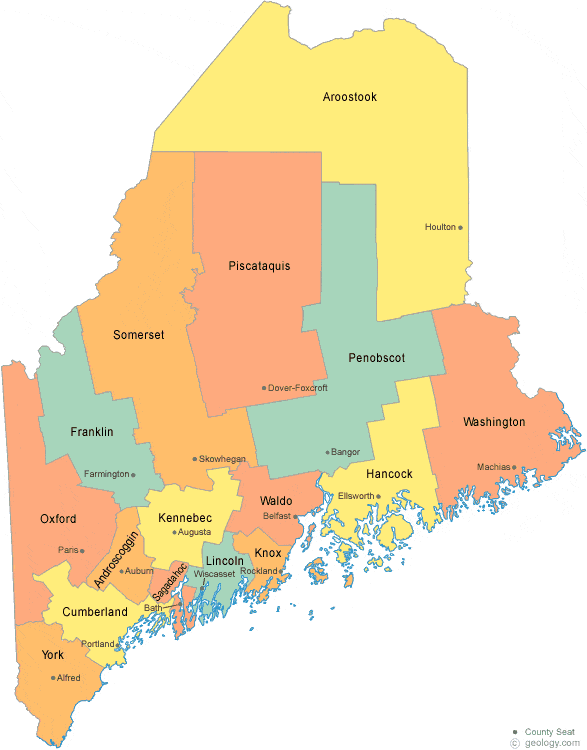 And here are the population projections for the next 5 years in the relevant counties: 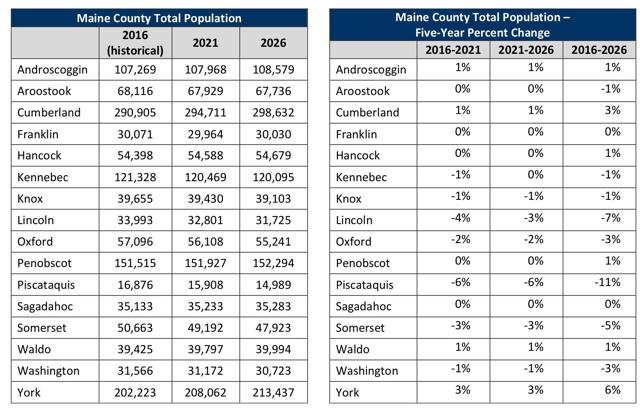 Three of the fastest growing counties are the ones just above Portsmouth, NH along the coast. Together with Aroostoock County that include Bangor, they make up the majority of the State’s population.

Maine is a State that is trending towards blue, and should be helped along with organization in those fast-growing counties.

In Kansas it is the northeast corner that is across the Missouri River from Kansas City. Here is a county map, along with the population forecast for each: 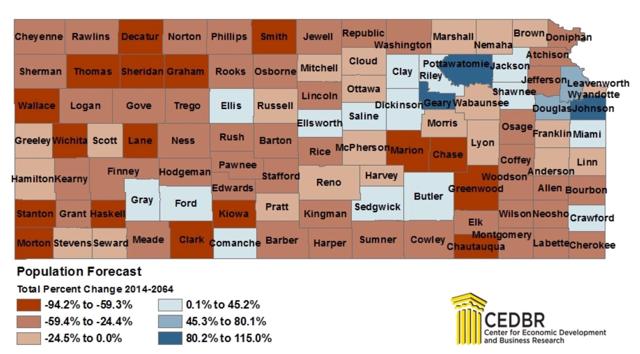 The western half of the State is actually *losing* population. In addition to the suburbs of Kansas City, the other fast growing area is Topeka.

And here is the population of the largest counties in Kansas:

Those fast-growing counties, plus Sedgwick County where the Capital is located, make up over half of the State’s population.

Kansas just elected a Democratic governor. It is had its bellyful of nutcase starve-the-beast State government. In 2018, Democratic Congressional candidates received 44% of the vote. Again, pouring resources into just the 5 or 6 fastest-growing counties to groom Democratic organizations ought to help move this State along from red to purple.

Yes, I know. Right now West Virginia is awful. But the situation is a reasonable mirror of Kansas. Here’s the county map, showing in blue all of the rural counties that are actually losing population - as is the State as a whole - together with the handful of counties in red and yellow that are gaining population: 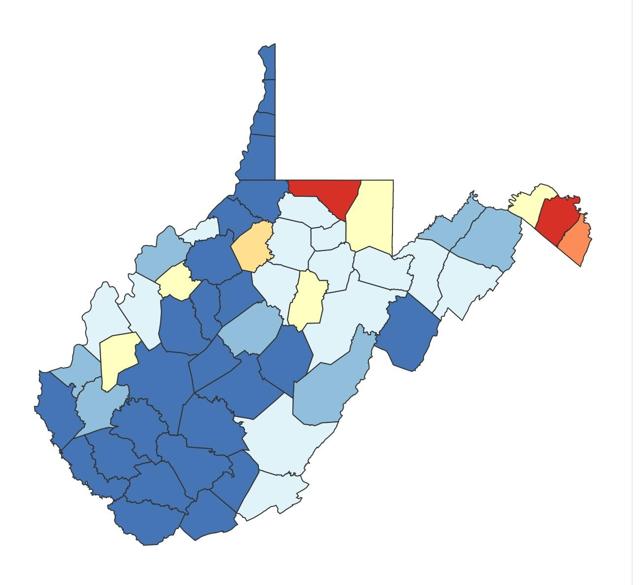 The five growing counties in the north and northeast currently have about 1/4 of the entire State’s population. The two northeastern counties are growing by about 1.5% a year

Just as growth in northern Virginia powered that State’s flip from red to blue, so the exurban push into the northeastern corner of West Virginia can help nudge that State along.

UPDATE: I had forgotten, South Carolina also has some exurban spillover, in this case from Charlotte, NC. Of its 46 counties, #7 York and #16 Lancaster Counties are part of the Charlotte metro: 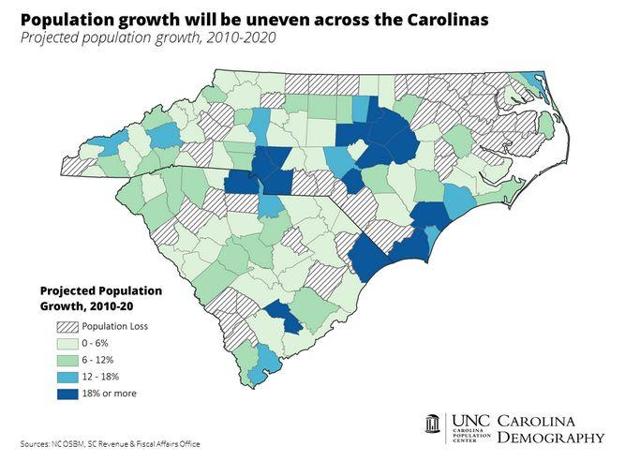 A final note about all four of the last five States -  Mississippi,  Maine, Kansas, and West Virginia. All have small populations, at 3.0 million,  1.3 million, 2.9 million, and 1.8 million respectively (only South Carolina has a relatively large 5.1 million population.)  Flipping a Senate seat in any one of them requires only 10% or less of the votes it would take in North Carolina, Texas, or Florida. And the organizational effort - where party organizations have until now been close to non-existent in some cases - only needs to be directed to about 5 counties in each of them.

In conclusion, put the 5 categories together, and there are 32 States where effort might be rewarded with a supermajority Democratic Senate. And even if not, a Senate with 55 or 56 Democrats can afford to lose a few milquetoasts and still vote to repeal the GOP filibuster. It’s would be tough, but it is still a worthwhile roadmap to potential victory.