US Equity and Economic Review For the Last Week

My Weekly Indicator piece is Up at XE.com .  There were no significant changes this week.
Posted by New Deal democrat at 8:13:00 AM

BTW, sorry about the light posting here this week.  I have been working on a bunch of things, but partly due to real life, and partly due to this week's exciting action at the dog track, it made sense to post more topical financial markets stuff over at XE.
Posted by New Deal democrat at 7:54:00 AM

A simple point about the Chinese stock market crash

As I wrote yesterday, the only thing that has been added to the economic news this summer, that we didn't already have last fall, is the Chinese stock market crash.  And wherever that crash is going to bottom out, it is most of the way there.

Here is a graph of the Shanghai index for the last 25 years:

Notice that the recent market bubble and burst aren't as severe as the 2008 crash, in which the Shanghai composite lost about 70% of its value from peak to trough.  And then bounced back smartly.

The Shanghai composite is already down 45%. Most of the damage has been done.

No inside information, but the big selloffs in the late afternoons the last two days have to odor of forced liquidation.  We saw a similar pattern in October 2008 after the September crash.  The forced liquidation reached a climax, and that was the bottom.

By the way, here is what American corporate insiders have been doing: 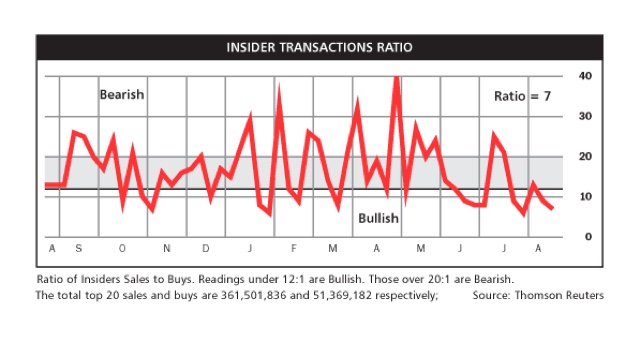 They've been buying, and that was before the big downturn in the last week.

My focus in this blog is on the economy, not on investing. And my focus on the economy is mainly about jobs and wages.  While I have a sneaking suspicion that one or more hedge funds will be carried out on their shield in the very near future, I just don't see this as having a big impact on the US economy at large, although job and wage *growth* will probably stall or decelerate.

Bottom line: whatever collateral damage a Chinese stock market crash might do to the US economy is almost certainly already priced in at this point.
Posted by New Deal democrat at 6:53:00 AM

China sneezes, and the US catches ... the sniffles

I have a new post up at XE.com, entitled "The China Syndrome."
Posted by New Deal democrat at 7:47:00 AM