My Weekly Indicators post is up at XE.com.  Are coincident indicators beginning to follow long and short leading indicators up?
Posted by New Deal democrat at 7:45:00 AM

My analysis of the most recent numbers on this most leading sector of the economy is up at XE.com.
Posted by New Deal democrat at 7:14:00 AM


At the beginning of this year, I identified graphs of 5 aspects of the economy that most bore watching.  Now that we are halfway through the year, let's take a look at each of them.

The Fed attempted to embark on a tightening regimen last December.  The question became, would the yield curve compress or, worse, invert, an inversion being a nearly infallible sign of a recession to come in about 12 months.  It turns out that the weakness in the wolrd economy has caused something of a compression just from the long end:

Rates on 2 year treasuries rose in advance of the Fed's move in November, but have since fallen to their pre-December range, while the 10 year treasury has fallen to all time lows (typically long rates only start to fall once the tightening cycle has caused the economy to weaken). At 0.86% as of last Friday, however, the yield curve is still quite positive when seen in a historical perspective.

Weakness in the economy has put the Fed back on hold, meaning that it will be very difficult for the yield curve to actually invert.

An elevated ratio of business inventories to sales means that businesses are overstocked.  This has frequently but not always been associated with a recession.  I have been using the wholesalers invenotry to sales ratio, since it has fewer secular issues.  While the raito increased in January, it has fallen slightly since then:

This is not objectively "good," but this kind of slow fall tends to happen as a recession is close to ending.

While 2015 saw a big improvement in involuntary part time employment, this trend has completely stalled in the last 9 months:

This expanded "U6" unemployment rate ( minus 10%)  is shown in blue in the graph below, toether with YoY nominal wage growth (minus 2%)!:

In the 1990s and 2000s, once the U6 underemployment rate fell under 10%, nominal wage growth started to accelerate.  U6 is now 9.6%, and there has been some mild improvement off the bottom.  More than anything, the US needs real wage growth for labor, and the present nominal reading of  2.5% still isn't nearly good enough.  With the expansion in deceleration mode past mid-cycle, it is not clear at all how much further improvement we are going to get before the next recession hits.
Posted by New Deal democrat at 9:00:00 AM

German investor confidence deteriorated in July on concern that Britain’s decision to leave the European Union could weaken the region’s fragile economic recovery.

The ZEW Center for European Economic Research in Mannheim said its index of investor and analyst expectations, which aims to predict economic developments six months ahead, fell to minus 6.8 from 19.2 in June. That’s the lowest level since November 2012. Economists in a Bloomberg survey predicted a drop to 9.

One Year Chart of Oil Prices 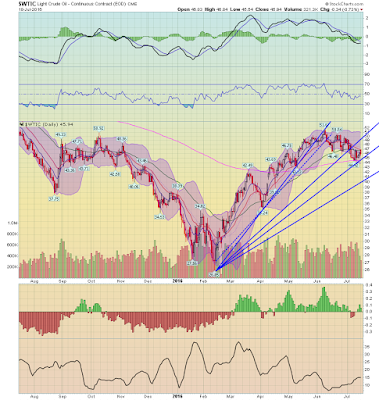 In the survey, 73 percent of CFOs said they are less optimistic about the financial prospects for their companies, up from 32 percent three months earlier. It was the most pessimistic view since the study began in 2007 -- even topping levels after the collapse of Lehman Brothers a year later.

Eighty-two percent of CFOs said they expected their employers to reduce capital spending over the next year, while 83 percent predicted a slowdown in hiring. Those figures were up from 34 percent and 29 percent, respectively, three months earlier.

Ninety-five percent of the executives surveyed said the level of uncertainty facing their business is above normal, high or very high, up from 83 percent in the previous survey. The last time uncertainty was at similar levels was during the height of the Greek debt crisis in 2012. Also, 68 percent said they thought leaving the EU would cause a long-term deterioration in the U.K. business environment.

“While in recent stress tests, the major U.K. banks were assessed with declines of around 30 percent in commercial real estate prices, we fear that London residential could experience an even more severe downturn,” Societe Generale analysts including Marc Mozzi wrote in a note to clients on Monday. “Brexit will damage the U.K. economy, and some companies will almost certainly have to relocate parts of their business to retain access to the EU single market.”

Sales of London homes under construction slumped 34 percent in the second quarter as the prospect of a vote to leave the European Union damped demand already hurt by higher taxes.

The number of residences sold before completion fell to about 4,600 from 6,974 a year earlier, according to data compiled by researcher Molior London seen by Bloomberg News. A spokesman for Molior declined to comment.

Brexit Not Having a Material Impact on US Firms (Macroblog)

We asked firms to indicate how the outcome of the Brexit vote affected their sales growth outlook. Respondents could select a range of sentiments from "much more certain" to "much more uncertain."

Responses came from 244 firms representing a broad range of sectors and firm sizes, with roughly one-third indicating their sales growth outlook was "somewhat" or "much" more uncertain as a result of the vote (see the chart). Those noting heightened uncertainty were not concentrated in any one sector or firm-size category but represented a rather diverse group. 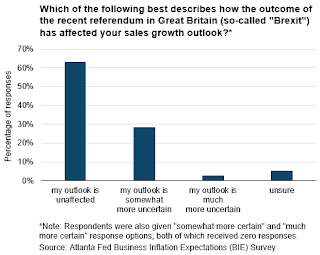 The June rate is a little above the position seen for most of 2016, though it is still relatively low historically.

Rises in air fares, prices for motor fuels and a variety of recreational and cultural goods and services were the main contributors to the increase in the rate.

These upward pressures were partially offset by falls in the price of furniture and furnishings and accommodation services.

Chart of CPI From the Report 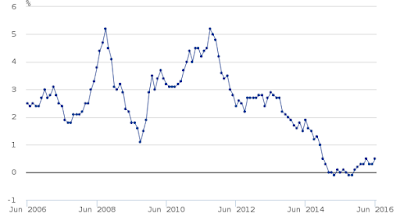 Industrial production for June suggests March was the bottom

Last week's report on industrial production for June added to the evidence that the bottom is in for the shallow industrial recession.  This post is up at xE.com.
Posted by New Deal democrat at 10:30:00 AM

Sector Performance For the Last Week

Seven sectors have broken through resistance.

“It’s the most serious, difficult issue facing the country for 50 years,” said John Bruton, 69, who was Irish prime minister between 1994 and 1997 and later served as the EU’s ambassador to the U.S.

Exporters have warned the plummeting pound will erode earnings and economic growth, just as a recovery had taken hold after the 2010 international bailout that followed the banking meltdown. Irish shares have declined, not least because the U.K. is the top destination for the country’s exports after the U.S. and the biggest for its services.

Meantime, Prime Minister Enda Kenny is fending off demands by Northern Irish nationalists for a reunification poll as he comes to terms with the loss of a key EU ally and plotters from his own party try to topple him. Then there’s the future of the U.K.’s only land border with the EU. 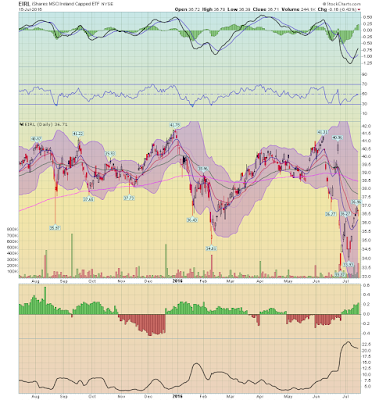 Yield Curves Are Flattening Across the Globe (Econbrowser) 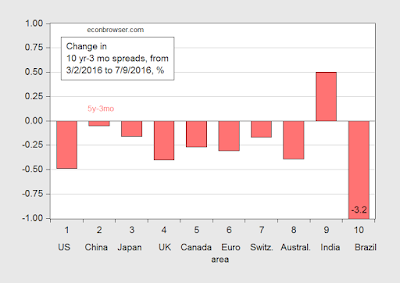 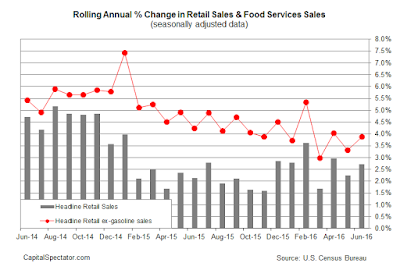 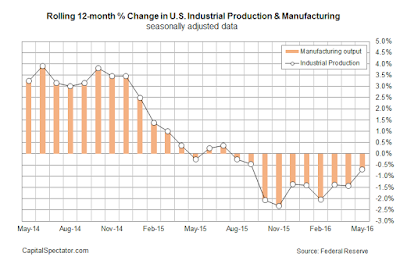 My Weekly Analysis is Up at XE.com

US Equity Market in Review

US Bond Market in Review

International Week in Review
Posted by Unknown at 10:34:00 AM