Weekly indicators for November 4 - 8 at XE.com

Click on the link for this week's edition of Weekly Indicators at XE.com. The nearly 3 year low in gas prices, plus the receding of the effects of the government shutdown, cetainly are helping.
Posted by New Deal democrat at 6:43:00 PM

Commodity Prices Are At Bay 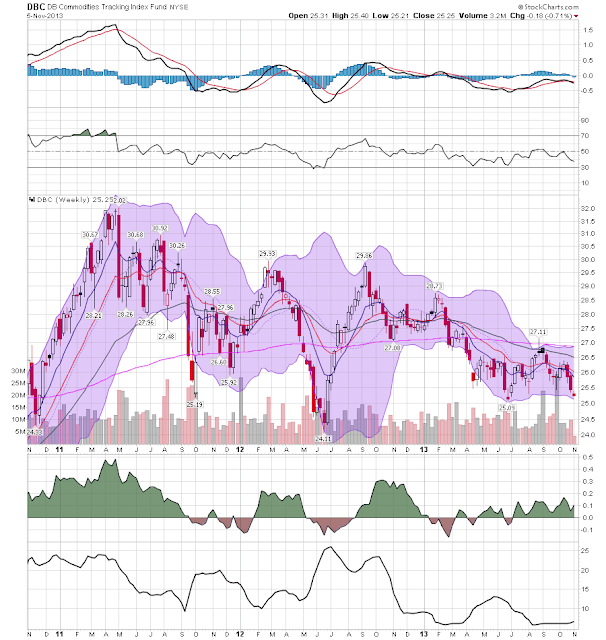 Above is a weekly chart of the total commodities index.  While it is fairly dominated by oil, the other commodities are present in sufficient quantities to make the following point: there just isn't much commodity based inflation in the system right now.  And overall, that's a very good thing as it allows the various central banks to keep rates low as the world at large is still in pretty weak economic shape.
Posted by Unknown at 7:17:00 AM

[Note: this was supposed to be a post at XE.com, but we're still working on uploading graphs, and I wanted to make sure I got this information out.]

For four years, there has been a brand of pundit I mock as "Doomers." These are the people who, week after week and month after month have written long-winded, persuasive sounding epistles, usually accomplanied by whatever data point is pointing south now, explaining that the economy is nowhere near growing, or never adding jobs, or heading for a double dip, a triple dip, or whatever dip it is going to be next. When the eonomy doesn't cooperate, or last month's sure-fire negative indicator improves, it is lost to the memory hole and on to the next sure harbinger of DDOM! we go.

Meanwhile those of us who are just boring nerds keep our eyes focused on the data, operating under the theory that it is far more likely than not, that it's not different this time, and that data has consistently told a story of slow but steady improvement.

September brought us more of the same. Typically the NBER looks at four sets of data -- production, jobs, sales, and income -- to decide if the economy is in a recession or expansion. Two of those -- sales and income - have already surpassed their pre-recession peaks. This month a third -- industrial production -- moved wtihin 1% of its prior high.

Here's what the four primary coincident indicators of the economy look like as of their last report.

First, here's industrial production, which is sort of "the first among equals." Most often the NBER dates recessions from the month this series tuns:

Industrial production rose 0.6 in September. At its current pace, it will finally exceed its 2007 peak sometime this winter.

This broke through its pre-recession high over a year ago, and as of its last report in August, was still rising.

Next, here is real retail sales:

These also exceeded their pre-recession highs about a year ago. While real retail sales declined slightly in September, the positive trend is fully intact.

Jobs have been the real laggard among the four big categories. While about 7 million jobs have been added since their low at the beginning of 2010, we are still close to 2 million below that peak. At our current pace, it will take another year before we have as many jobs as we did at the end of 2007 -- and that isn't adjusting for population growth.

So the story remains the same as it has been since the bottom of the recession in 2009. The economy continues to impove, just not enough to substantially improve the lot of the average American household.
Posted by New Deal democrat at 11:30:00 AM 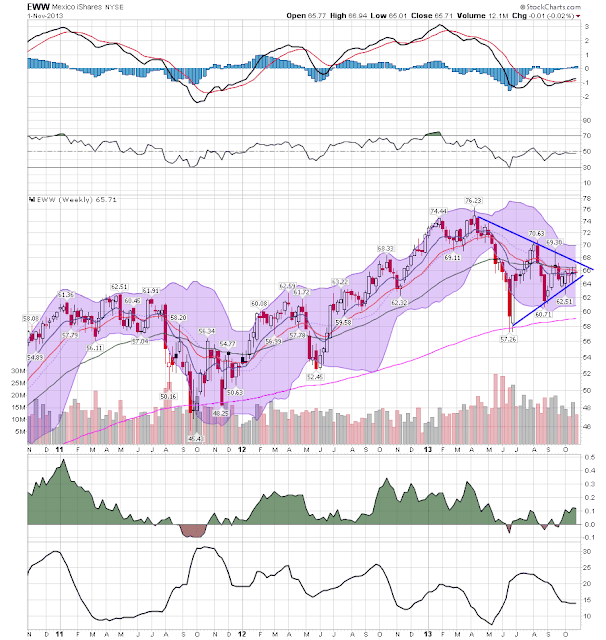