My Weekly Indicator post is up at XE.com.  The most up-to-date data typifies an economy in Indian Summer, and forecasts a narrow win for Hillary Clinton in Tuesday's election.

October Jobs report: a positive final report before the election

The more leading numbers in the report tell us about where the economy is likely to be a few months from now. These were positive.

This was a nearly perfectly positive report, With the exception of manufacturing jobs, YoY wage growth and broad labor force participation, everything else was positive across the board. Espectially positive was the new low in the U6 underemployment rate, and the increase in the prime age participation rate.  One longer term caution is that the YoY change in payroll growth continues to decelerate, but there is no imminent cause for concern.

This report is probably more significant as the last piece of economic data that could affect the election.  That both the unemployment and underemployment rates are lower than they were last December is particularly positive for the candidate of the incumbent party.  The economic fundamentals point to a narrow (e.g., 52%/48%) Hillary Clinton victory.  If the broad electorate views both candidattes as about equally distasteful, that's where I see the election result coming in.

This post is up at XE.com.  Hosuing and cars are thw two most leading consumer sectors.  Right now both are essentially flat, while continued high rents are pressuring consumers and virtually the only source of any inflation at all.
Posted by New Deal democrat at 9:00:00 AM 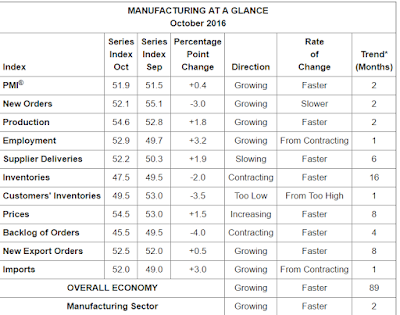 The 2016 election economy: the "Bread and Peace" model final forecast

One of the election forecasts I have referred to frequently for the last year is the "Bread and Peace" model by Professor Douglas Hibbs.  Hibbs himself has not published any forecasts for this election, but the result forecast by his model has been updated from time to time by the site "Pollyvote," which describes his model thusly:

As of one week ago, the site forecast:

The 2016 Bread and Peace model predicts a victory for Hillary Clinton with 53.9% of the major party vote (compared to 46.1% for Donald Trump).

On Monday September personal income was reported, rising +0.3%. The inflation measure rose +0.1%.  But real *disposable* income for the month actually declined, so here is what real disposable personal income per capita looks like through Q3, the last measure before the election:

The deceleration in growth of real disposable personal income is evident when we look at this data YoY:

Through August, Q3 real disposable income averaged an increase of +0.2% from Q2.  With September's report, that declines to less than +0.1%.

Thus the Bread and Peace model's final reading for Hillary Clinton is less than 53.9%, although above 50%.

Since August 1, poll aggregations have floated around +4% for Clinton, +/-3% depending on which candidate for whom the most recent news was awful.  If the voting public concludes on average that they are about equally distasteful, then a result closer to that forecast by economic fundamentals becomes more likely.
Posted by New Deal democrat at 10:05:00 AM


This morning we got our first October economic report.  The ISM manufacturing index was again weakly positive at 51.9.  The more forward looking new orders sub-index was a little bit more positive at 52.1.  The new orders component in particular was about at its average for this entire year, telegraphing continued weak expansion.

So let me turn some extra attention to the report for construction spending for September.   This was negative for the second month in a row, and has been essentially flat for over a year:

Although I won't put up a graph, YoY total construction spending is slightly negative at -0.2%.

When we break down construction spending into its components, it is easy to see that residential spending turns first (red in the graph below), followed by nonresidential (blue), and finally with a big lag, public construction (green right scale):

Let's take a closer look at the last couple of years.  Both residential and nonresidential peaked early this year, and have declined slightly since then:

Finally, let's see how residential construction spending compares with an important leading indicator, housing starts (as usual for the last year, I am choosing this metric vs. permits because permits were greatly distorted by an NYC tax break in spring 2015):

So I look at construction spending as simply confirming what we have seen with the longer  leading indicators in the housing sector.  I continue to expect a little bounce in starts as summer's low mortgage rates filter through the system.  But for the foreseeable future, I expect the slightly lagging construction spending series to remain essentially flat.
My outlook differs from that of Bill McBride a/k/a Calculated Risk a/k/a the Nicest Guy in the Econoblogosphere, who expects housing to pick up in the next few years (and has been cited for that proposition by Econbrowser's Prof. James Hamilton.  While I have great respect for both, my question is, if you are correct, then why has housing been so flat for the last year or more?  Wan't your dynamic already in place?  Why hasn't it played out in the last 12 months? 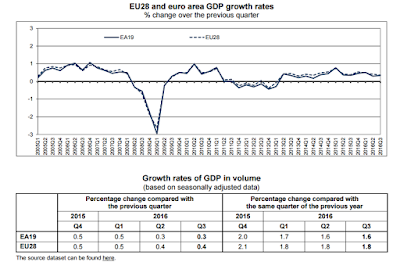 EU Inflation Picks Up a Bit Thanks to Service Prices

For those of you who follow me on Twitter, I'm moving from @captivelawyer to @originalbonddad.
I'm a Financial Adviser with Thompson Creek Wealth Advisers and an attorney with the Law Office of Hale Stewart

Contributions to Percentage Change in GDP

We Weekly Columns Are Up at XE.com