There is more evidence of weakening of the coincident data, probably as the result of the completely out of control pandemic. Some of that is probably due to new restrictions, some to winter weather causing people to curtail some activities, and some (probably most of all) to people becoming much more cautious about any activity that causes them to come into contract with others.

As usual, clicking over and reading rewards me just a little bit for my efforts.

HEADLINES:
Leading employment indicators of a slowdown or recession
I am still highlighting these because of their leading nature for the economy overall.  These were generally positive:
Wages of non-managerial workers
Aggregate hours and wages:
Other significant data:
SUMMARY
This was a mixed report. Most of the headlines were positive, but there were several important internal weaknesses. Most importantly, permanent layoffs increased, and the manufacturing workweek declined. This is a warning that the manufacturing surge may be ebbing, while temporary job losses are metastasizing into permanent ones. The headline number of job gains was by far the least positive of any gains since April.
On the other hand, all of the other leading job categories showed increases in employment. Additionally, both average and aggregate hours and payrolls continued to increase pretty strongly. Aggregate payrolls are back where they were a year ago (of course, inflation has eaten away at some of that rebound).
The overall tone remained positive - but the “least positive” of the last 6 months.
UPDATE:  One thing I neglected to mention was that there were -99,000 government job losses. Without those, the gain in employment would have been 344,000. Better, but still the “least positive” number since April.
Posted by New Deal democrat at 8:30:00 AM

This week’s new jobless claims decreased close to their pandemic lows, while the unadjusted and 4 week averages did make new pandemic lows, as did continuing claims.On a unadjusted basis, new jobless claims fell by 122,453 to 713,824. Seasonally adjusted claims declined by 75,000 to 712,000, still 1,000 higher than their pandemic lows three weeks ago. The 4 week moving average also fell by 11,250 to 739,500. Here is the close up since the end of July (for comparison, remember that these numbers were in the range of 5 to 7 million at their worst in early April):

Continuing claims historically lag initial claims typically by a few weeks to several months. On an unadjusted basis, they declined by 690,170 to 5,240,575. With seasonal adjustment they declined by 569,000 to 5,520,000, both new pandemic lows:

Initial claims remain about 50,000 higher than their worst levels of the Great Recession, while continuing claims have actually dipped about 1 million less than their worst levels.Last week I wrote that “It appears increasingly likely that two weeks ago will mark an interim low, due to the pandemic spiraling out of control again in most of the country.”  This week’s data shows that to be incorrect, as all measures made new pandemic lows, except for seasonally adjusted initial claims, which missed by 1,000.Still, as the below graph of the YoY% change in initial claims shows, on a YoY basis, progress stopped in November:

We’re likely to get another positive number in tomorrow’s November jobs report, but my guess is it will be the weakest reading of the past 6 months. I still suspect the near term trajectory in new jobless claims is going to be poorer.

First look at the 2021 economy: housing

As I’ve pointed out for years, housing is a long leading indicator. It can give us a decent read on the direction of the overall economy 12 to 18 months out.

So the strength in the housing market in the past 6 months has been a powerful positive omen for the economy going into 2021.

I put together a much more comprehensive overview of the housing market, including mortgage rates, sales, prices, and inventory, and it is posted at Seeking Alpha.

As usual, clicking over and reading puts a penny or two in my pocket to reward me for my efforts, as well as giving you useful economic information about the future.

The first November data point, the ISM manufacturing index, was reported this morning, and while it declined from last month, it remained very strongly positive. 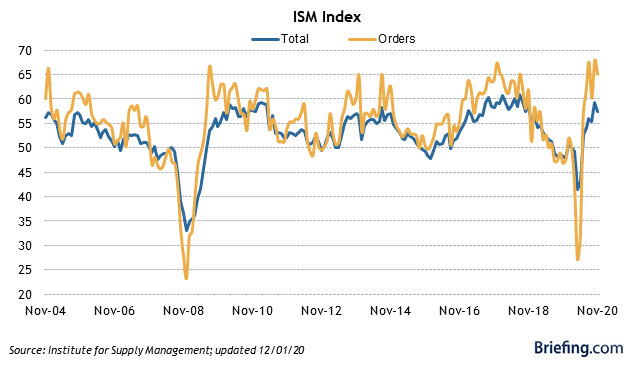 Since any reading above 50, however, indicates expansion, these were positive readings. The overall index is at levels equivalent to where it was during the strongest parts of the last decade’s expansion, and this month, like 3 of the last 4 months, the new orders component is equal to its strongest levels of the past 16 years.
Manufacturing has been very strong in the last half of this year, and as a short leading indicator, the ISM manufacturing index suggests that strength is going to continue in the first part of next year as well.
In general both the short and long leading indicators are very positive for 2021. I am putting together detailed posts to that effect which will be up at Seeking Alpha, and to which I will link here.
Posted by New Deal democrat at 10:37:00 AM

*I suspect the real number is 18-19,000,000, or between 5 to 6% of the total US population
Source: COVID Tracking ProjectInfections are out of control over much, if not most, of the country. North and South Dakota, the 2 worst States, now have had confirmed infections in over 10% and over 9% of their entire populations (and probably much worse than that since many asymptomatic cases go undetected):