The financial markets - stocks, bonds, and commodities - are groping for a bottom as they try to gauge the impact of coronavirus on the economy. Meanwhile as I wrote earlier this week, so far there only looks like one area of “hard” evidence of coronavirus impact.

As usual, clicking over and reading rewards me a little bit for my efforts, and brings you as up to date as possible as to the state of the economy.
Posted by New Deal democrat at 8:02:00 AM

I am highlighting these because many leading indicators overall have strongly suggested that an employment slowdown is here. The following more leading numbers in the report tell us about where the economy is likely to be a few months from now. These were mixed to slightly negative:

Needless to say, this was a very strong report. Only a few items were negative, including a slight increase in the underemployment rate, involuntary part time employment, and those not in the labor force who want a job now. There was also a slight decline in the employment to population ratio, and a decline in the leading sector of temporary jobs. Wage gains decelerated slightly from peak.

But there were blowout gains in government jobs and construction in particular. Revisions to the past several months, a leading indicator, were extremely positive. Aggregate hours and payrolls increased strongly.
My important cautionary note is that we had a mild winter in the entire lower 48 states, so the seasonal adjustments to sectors like construction may be playing an outsized role. If so, there will be payback in the next few months. Also, the comprehensive numbers from actual tax reporting for the Third Quarter of last year just got reported two days ago, and it showed the slowest YoY gain bar one quarter since early 2011 at 1.1%, vs. 1.3% for nonfarm payrolls. In short, there are important reasons to suspect that the gains shown in recent monthly job reports  have been overstated.
Posted by New Deal democrat at 8:11:00 AM

Normally I don’t pay much attention to durable goods orders. They are simply too volatile to distill signal from noise on most occasions. But since I’ve been watching for signs that the producer turndown has spread to consumers, it definitely merits a mention this month.

That’s because new consumer durable goods orders declined -2.8% in January. They are now down -9.3% from their July peak:

Even so, note that in the months leading up to the producer-led 2001 recession, consumer durable goods orders were down over -20% for several months. There have been several slowdowns - 1995, 1998, 2006, and 2015 - where 10% declines similar to this decline have not led to recessions.

The 2008 recession was consumer-led and started out with a spike in gas prices from $3 to $4 a gallon, on top of a steep decline in housing, and a significant decline in motor vehicle sales.

While the January decline in consumer durable goods orders takes us a step closer to recession, barring a big downward revision in January retail sales and payrolls, it still is most consistent with a slowdown only. Of course, coronavirus may make all of this irrelevant.

First, an update on jobless claims: neither initial jobless claims nor continuing claims met either of my thresholds for concern this week. Both are below their levels a year ago, and the four week average of initial claims is less than 5% above its lows for this expansion.

Intermodal rail loads were down -12.5% YoY last week. Except for two weeks right after Thanksgiving, at least one of which was clearly due to seasonality, this was the first time that intermodal transport by rail was down -10% or more since its initial decline 12 months ago. In other words, the ongoing decline didn’t just continue - it intensified.

Here’s a look at a multi-year graph of intermodal traffic from the AAR site. I’ve highlighted 2019 data. For YoY comparisons, 2018 is the faded green line; 2020 so far the faded red line: 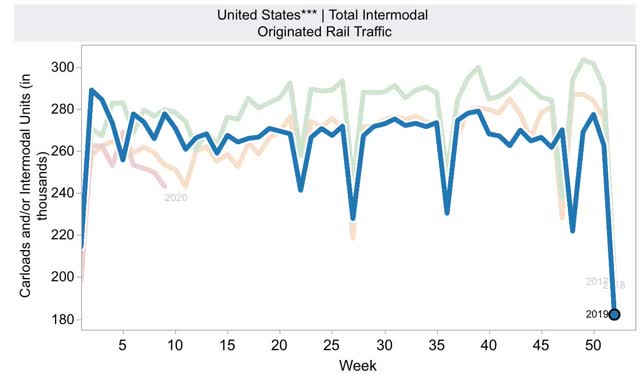 It’s not unusual seasonally for rail traffic to decline w/w this time of year, but this does not affect the YoY comparisons.

While correlation does not mean causation, in this case it is clearly entitled to the first pass. Coronavirus has infected the producer supply chain in a significant way.

Let’s take a look at February car and heavy truck sales. Putting this in perspective of economic cycles, typically, after housing turns, consumer purchases of vehicles and then other durable goods (like major appliances) turn down. Broader consumer purchases are the last to turn down before a recession.Light vehicle sales in February were estimated by the BEA at 16.7 million annualized (blue in the graph below, subtracting 16.7 so that February = 0). This is slightly below January’s level, but not nearly so much as would presage a recession. For that I would expect to see a number below 16.25 million:

Meanwhile heavy truck sales came in at 0.462 million annualized (red, also normed so that February = 0). Although this is slightly higher than January’s level, it is the fourth poor reading in a row, and demonstrates the producer downturn - although it is consistent with previous slowdowns and is not quite as severe as before the last two recessions.

There is no coronavirus impact in these numbers. They continue to show a producer downturn and a reasonably healthy consumer expansion.
Posted by New Deal democrat at 7:54:00 AM

Aside from sitting around twiddling our thumbs waiting for partial motor vehicle sales from February to be reported later, there’s no economic news of note today.

But Tuesday mornings each week we do get chain store sales from the previous week. And if you’ve been paying attention, you know that I have been paying particular attention to these for signs that the producer downturn is spreading to consumers. That has taken on more urgency as we wait to see if coronavirus fears cause people to self-quarantine.

Both of these numbers are right in line with each survey’s typical YoY growth for the past few months.

On the producer side, we might see some impact in YoY rail and steel numbers later this week.

But on the consumer side, people continue to look on the bright side of life.
Posted by New Deal democrat at 8:53:00 AM

First of all, let’s all acknowledge that all of this data is likely to be big-footed by the effects of coronavirus. But it is still good to know the underlying state of the economy.

And in that regard, we got two decent numbers this morning.

These are the two least volatile number in the very forward-looking housing sector. Note that construction spending does lag permits, but it nevertheless leads the economy overall. This is a positive for the second half of this year.

Second, the ISM manufacturing report for February was the second (ever so slightly) positive month in a row, at 50.1 (over 50 means expansion). The new orders component  did contract, also very slightly, at 49.8: 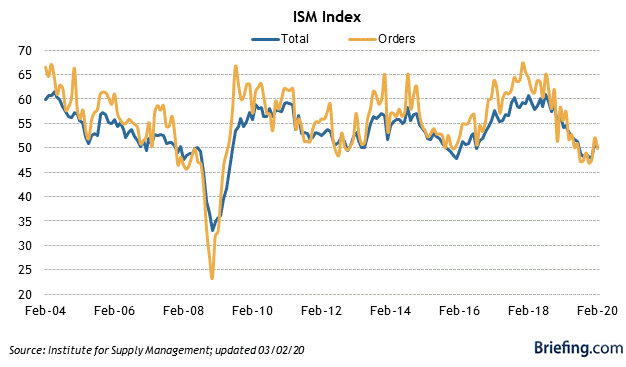 This is a short leading indicator, suggesting the producer side of the economy treading water in the next few months.

If we didn’t have one of the four horsemen of the apocalypse galloping into the picture, these would both be signs of no worse than a slowdown in the economy as we go later into 2020.