Weekly Indicators for January 26 - 30 at XE.com

The US housing market is enjoying a rebound, courtesy of the flight to safety to US Treasuries created by the latest Euro-crisis.  Thank you, Syriza!
Posted by New Deal democrat at 9:07:00 AM

Us Equity Market Review For the Week of January 26-30; We're Getting Defensive, Edition

So, what’s the conclusion to draw from all this information?  First, global headwinds caused by the higher dollar, cheaper oil and slower global growth are clearly having a negative impact.  In fact, the effect is so strong that it’s preventing a meaningful upward move to new highs.  This also means that we’re moving from a “you can throw a dart at a dartboard and pick a winner” market to very much a stock-pickers market.  And, as upward growth has more or less stalled for the time being, adding an income component to any purchase is a good idea.

International Economic Week in Review: Just How Strong is the US Economy?

The general conclusion regarding the US economy is everything is moving in the right direction.  Consumers are spending and businesses are investing.  This is helping to keep the job market on an improving path.  However, we're still waiting for wage growth to catch-up.  But so long as this overall trend continues, that should occur.  The conclusion is the US economy is pretty darn healthy right now.
Posted by Unknown at 10:13:00 AM

Real median weekly earnings rose slightly in Q4, and in 2014

Every quarter the BLS reports usual weekly earnings, a median measure of wages (the monthly jobs report includes average wages rather than median).

Here's what happened on a quarterly basis, beginning one year ago:

Nominally, the YoY increase was +1.7%.  Since YoY inflation was +1.2%, that means real median weekly earnings increased +0.5% in 2014. The second quarter of 2014 was the post-recession quarterly low, although I suspect that was simply a bad sample.

An improvement definitely, but certainly not good enough.
Posted by New Deal democrat at 12:21:00 PM

A timely quote about measles; an ironic one about national health insurance

I am currently reading John M. Barry's 2004 book, "The Great Influenza," about the Spanish Flu pandemic of 1918, which is said to have killed more people worldwide than any other plague (including a great- aunt and/or uncle of mine).

[S]ome diseases depend upon civilization for their own existence.  Measles is one example.  Since a single exposure to measles usually gives lifetime immunity, the measles virus cannot find enough susceptible individuals in small towns to survive; without a new human generation to infect, the virus dies out.  Epidemiologists have computed that measles requires an unvaccinated population of at least half a million people living in fairly close contact to continue to exist.

In other words, a thorough enough worldwide campaign of vaccination could wipe out measles, like smallpox, forever.

"There are unmistakable signs that [national] health insurance will constitute the next great step in social legislation."

- Rupert Blue, address as President of the American Medical Association, 1916.

Berkeley Professor Emmanuel Saez has updated his comprehensive tax return data through 2013, showing real average incomes of the bottom 90% vs. the top 10%, 5%, and 1%.  From Justin Wolfers in the New York Times:

[With regard to t]he income share of the richest 1 percent of American families[,]  Emmanuel Saez, the economics professor who crunches these numbers based on data provided by the Internal Revenue Service, has just released preliminary estimates for 2013. The share of total income (excluding capital gains) going to the top 1 percent remains above one-sixth, at 17.5 percent.
....
[Because of income shifting from 2013 to 2012 due to the "fiscal cliff," it is f]ar better instead to focus on the average of the past two years. That average supports the narrative that the economic recovery so far has only boosted the incomes of the rich, and it has yielded no improvement for the bottom 99 percent of the distribution. After adjusting for inflation, the average income for the richest 1 percent (excluding capital gains) has risen from $871,100 in 2009 to $968,000 over 2012 and 2013. By contrast, for the remaining 99 percent, average incomes fell by a few dollars from $44,000 to $43,900.

Remember this is real, inflation-adjusted data.  It is the average rather than the median.

The bottom line here is the same as for just about every other study since 2009.  Wages have stagnated, and due to the increase in gas prices from $1.60/gallon in 2009 to nearly $4/gallon in 2011-13, real incomes declined slightly during that time, while due to a soaring stock market, the wealthy, who disproportionately own stocks, saw their income soar as well.

Saez' research is exhaustive, compiling tax return data.  A drawback, however, is that now in January 2015, we are only able to see the data for calendar year 2013. Here's Saez's graph of annual real average income from 1913 through 2013 of the bottom 99%: 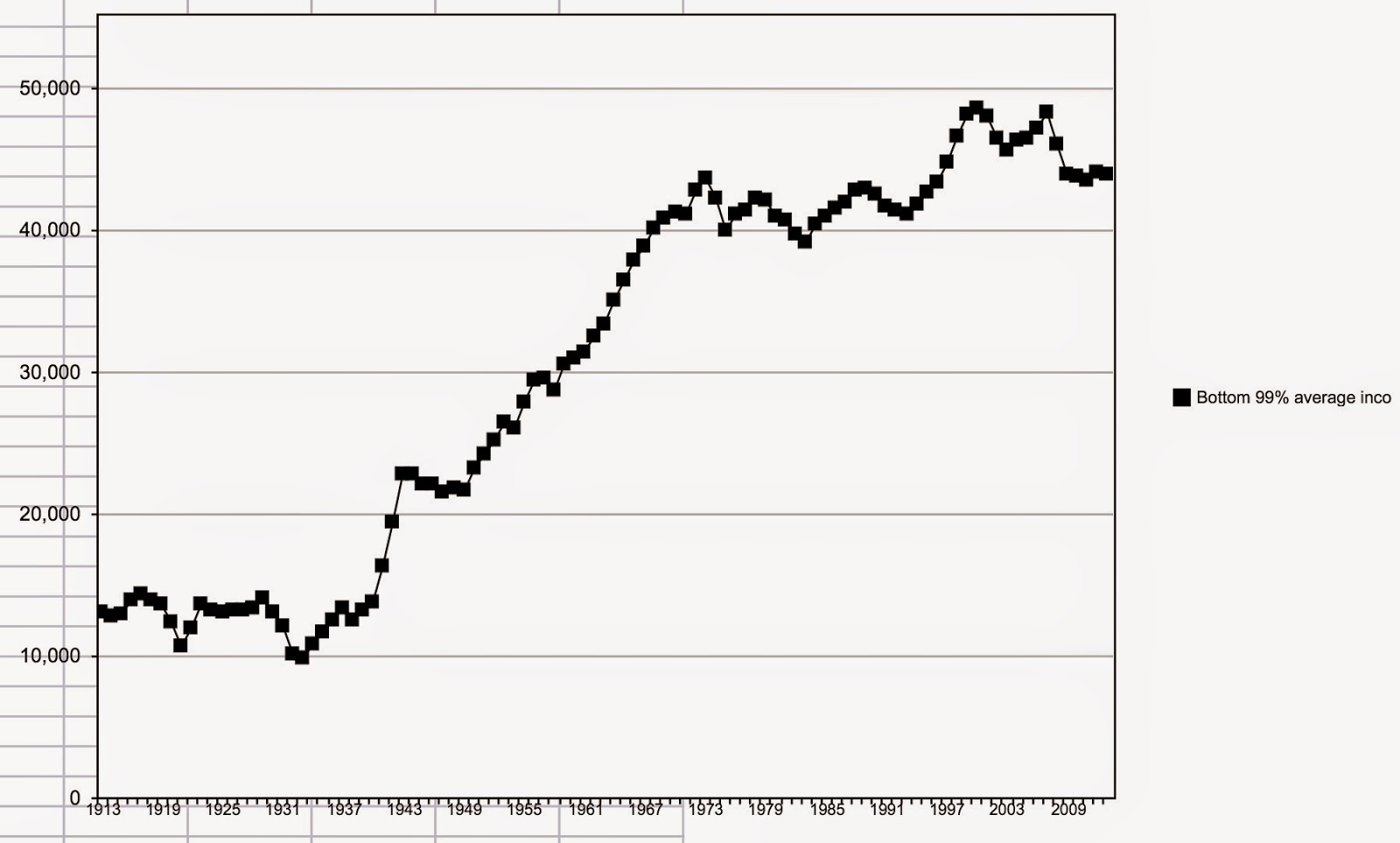 Thus it is noteworthy that Saez' data is very similar to that in the monthly updates starting from the late 1990s through last month by Sentier Research, and eloquently graphed by Doug Short.  Here's Sentier's graph: 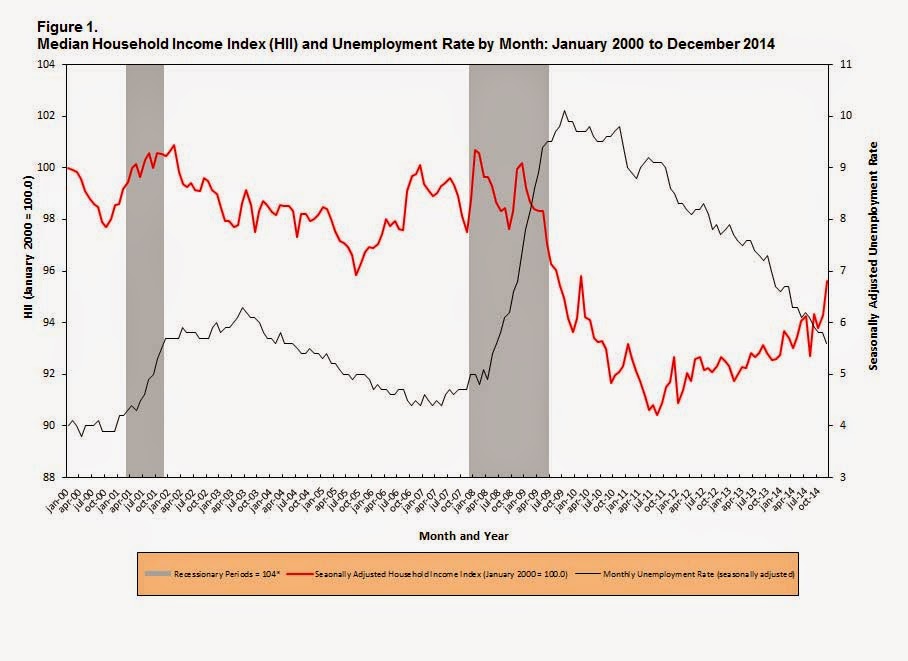 So it is a fair supposition that a year from now, Saez's more comprehensive update for 2014 will show a similar increase to that we have seen in the Sentier Research.  That's good news.  The bad news, of course, is that even so, income inequality is the worst in nearly a century.

This is what $2/gallon gasoline does:

via Doug Short.  This is a 7 year high in consumer confidence, and well in line with economic expansions prior to the Great Recession.

Gallup's daily economic confidence index also continues to be positive, after 7 years of being negative.

Of a piece, there used to be a site called "Professor Pollkatz" which chronicled the high correlation between George W. Bush's approval ratings and the price of gasoline.  Obama's ratings show a similar pattern.

(Btw, for you young whippersnappers, the tag line comes from an ancient Rolling Stones tune).

It seems that a poll of investment analysts showed that a majority believe that a further drop in Oil prices will signal the onset of a global recession.  To the contrary, history shows that, if there is a recession, then a steep drop in Oil prices signals that the bottom is near.
Posted by New Deal democrat at 9:22:00 AM

A credit downgrade to junk, a falling currency and depleting central bank reserves, oh my!
Posted by Unknown at 7:38:00 AM

A comment about the Syriza election victory in Greece

As he indicates in the last post, Bonddad has an article up at XE.com describing the economic situation in Greece.  His conclusion is straightforward:

Looking at these simple numbers, the real question that should be asked is why did this take so long to happen?


[I]n a democracy, austerity will eventually fail at the ballot box. The people will not tolerate 25% unemployment forever - with no hope in sight.

While I disagree with many of her Doomish posts,  Yves Smith at Naked Capitalism has a very good article this morning gaming out the possibilities.  Like her, I see no reason for Syriza not to take a Maximalist approach (for examples, see GW Bush, Scott Walker in Wisconsin).  Syriza has nothing to gain by starting out with a milquetoast, let's-meet-halfway approach.  On the contrary, they have everything to gain by starting out by saying to every agent of their creditors:  "We're leaving the Euro, and we're unilaterally writing down our debts in Drachma.  If you don't like it, screw you.  If you don't want us to do that, make us an offer."

The simple fact is, the Euro states, and the European Union itself, have as much at stake as Greece.  Everybody on both sides knows that Italy and Spain, and maybe several other countries as well, are waiting in the wings.  If similar parties come to power in those countries, the sustainability of the Eurozone, and the Euro itself, are very much called into question.  No further significant European integration has happened in the 15+ years since the Euro was adopted.  Reversing EMU strikes at the heart of the European project itself:  the binding together of mortal enemies to put an end to centuries of war.  Thus every reason for both sides to put on their poker faces and play and extremely high-risk game of chicken.

A more fundamental point is about human nature.  In any economic downturn, the powerful elites are going to try to deflect all of the suffering on the powerless masses.  In a representative democracy, eventually the majority will rebel at the ballot box and elect a party which promises to end their suffering.  That's what happened in Greece, and what may happen shortly in other European countries.

In an authoritarian state, however, no such safety valve exists.  That's why, per my studies long long ago in a galaxy far far away of European history, revolutions don't happen in an era of rising expectations.  They happen when rising expectations are dashed.  So long as China's economy continues to expand stoutly, expect no meaningful turbulence.  But someday China will have a recession, and then, dear reader, is when world history will get interesting.

The Failure of Austerity, Greek Edition

International Economic Preview For the Week of January 26-30