Weekly Indicators for October 12 - 16 at XE.com

The employment picture is really coming into focus, in the context of the shallow industrial recession and inventory correction.
Posted by New Deal democrat at 9:16:00 AM

By now I'm sure you know that industrial production not only declined again in September, but has also failed to make a new high in almost a year.

But what happens when we remove mining and utilities, and focus on manufacturing?  Here's what happens: 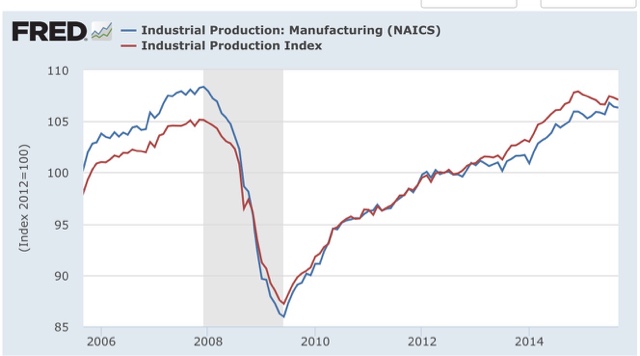 Manufacturing (blue) continues to be in an uptrend, although it is slightly off (-0.3) of its high two months ago, which is actually pretty darned good considering the strong dollar.

Yes the US is in a shallow industrial recession. But it is focused and limited, and hasn't translated into any downdraft in the consumer economy (see: real retail sales) which is 70% of the total.
Posted by New Deal democrat at 12:15:00 PM 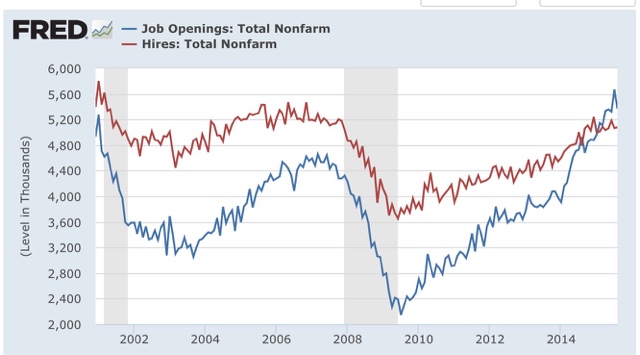 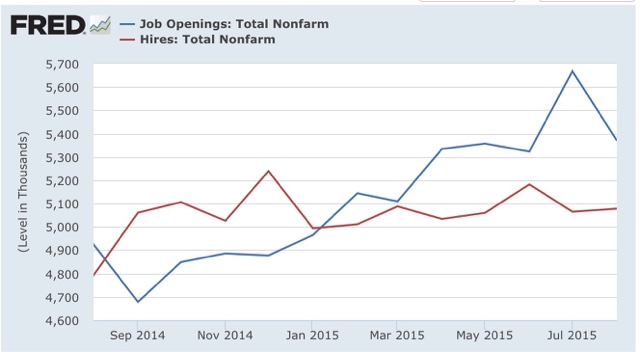 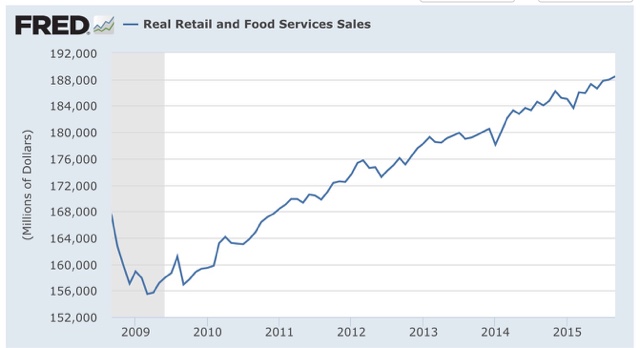 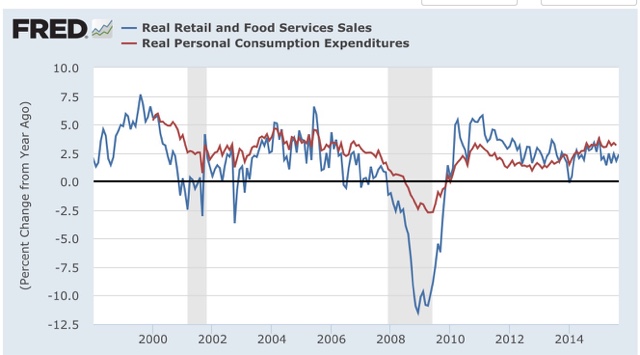 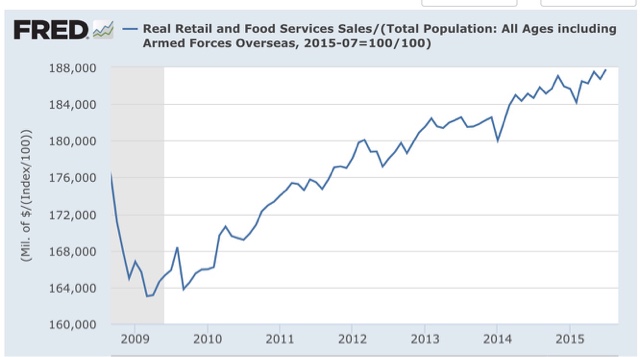 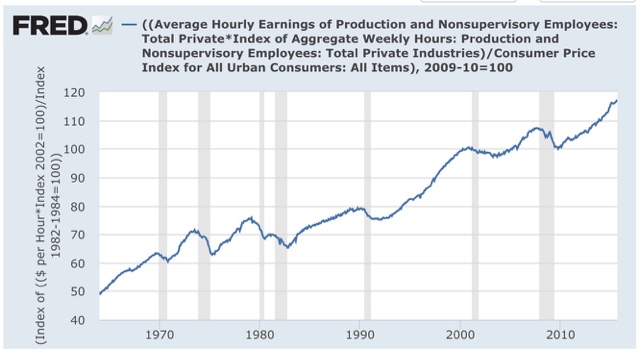 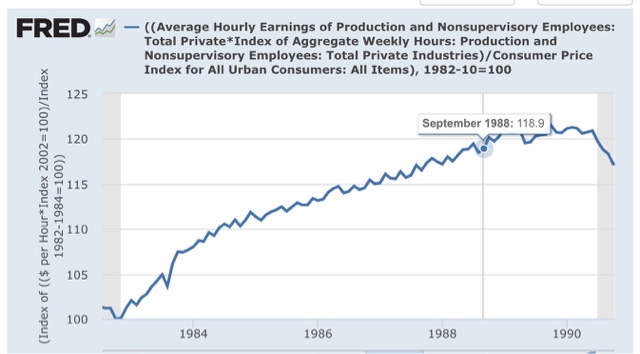 With Q3 in the books for stock prices, where does this relationship stand?
Posted by New Deal democrat at 9:32:00 AM

My Three Weekly Reviews Are At XE.com

Bond Market Week in Review
Posted by Unknown at 9:58:00 AM

A thought for Sunday: in which I despair


Over the last couple of years, more and  more blogs have closed down.  Sometimes, it is because the person has too many other obligations.  Sometimes, the person has just a few readers, but other great qualities. For example, the best political blogroll I ever encountered was at Frank Chow's now-closed blog.  Recently he made access to the blog private, so even that is gone.

According to one of the best political books I have ever read, "Whistling Past Dixie," showed, based on reams of polling data, that white working class voters in that region -- unlike such voters in any other region -- treat candidates' positions on "social issues" as a filter.  If a candidate does not make it through that screen, their economic positions don't matter.  Significantly, the reactionary views in that region coincide with the first major immigration into the region -- of Latinos and relocated Yankees -- in 400 years.  The old social order of the descendants of largely Scotch-Irish whites at the top, and the descendants of African slaves beneath them, is being profoundly shaken.

Just this morning, I read an article where struggling South Carolinians are interviewed about stagnant wages.  They all acknowledge the problem, and are angry about it.

Economic despair is a potent political force. . . .
[When]  you listen to indignant voters[, d]espite the still nascent recovery, a huge number of people in the middle and lower classes say their wages have not budged in years.

And what was their mindset?  What did they see as the solution.  Here's a sample:

[T]o prosper, the economy has to prosper,” Mr. Lewie said, “and it’s the rich people that produce jobs.”
When asked to assign blame for stagnating wages, he and his wife pointed to the federal government. Regulations and high taxes, he said, not lower wages abroad....

The operative definition of insanity.

Never mind that since at least 1981 we have gone down this road of increasing wealth at the very top, increases in corporate profits, and Federal *DE*regulation.  The results are pretty damn evident if you are not self-blinded.

Similarly, automatic tax breaks, weighted towards consumers, should be in place, taking effect quarterly or at very least annually as unemployment increased, and then automatically and gradually reversed as unemployment decreased again, with an eye towards running a surplus once an economic expansion were well-established.

All of which would hardly have been a pipe dream in my youth.  One can easily imagine a Lyndon Johnson or a Robert F. Kennedy or one of many other New Deal democrats proposing such a system.  But no more, and certainly not with one party dominated by an adamantly opposed Dixie, and the other dominated by an elite of neoliberal milquetoasts.

I used to say that politically the US has shifted 1 standard deviation to the right since then.  I no longer believe that.  The US is now *2* standard deviations to right of where it was 50 years ago. We have a Supreme Court one vote shy of dismantling the 20th Century, and they don't have much respect for the post-Civil War Amendments either.  We have a strident minority in the House of Representatives that thinks it would be cool  not to pay the bills that they have already incurred on behalf of the US.  We had a GOP President who endorsed torture, saturated surveillance that police can access without a search warrant, and tax rates that could not possibly fund the fiscal obligations of the country. We now have a Democratic President who has made all of these positions permanent.  These are now bipartisan positions.  Johnson and Kennedy would be treated as beyond the pale now.

In 2008, a majority of the country was ready for significant change.  It got Obamacare and not much else.  Instead, Obama co-opted and then defenestrated the netroots Progressive movement. So, 2008 was a "failed turning point," after which, as in 1989 Tiananmen Square, or 1848 Europe, the reactionary elites double down.

As bad as things are now for the middle class, the next recession is out there.  I am terrified that when it comes, wages, which have only been up 2.5% YoY at their very best during this expansion, will go into outright deflation, opening the door to a wage-price deflationary spiral.  In other words, unless policies are changed, the next recession is likely to be even worse than the last one.

In the meantime, especially if Hillary Clinton is the democratic nominee, the best available choice is going to be more reformist neoliberal nibbling around the edges.  That means there is no real chance for economic progress until 2020, and maybe even 2024.  And I am not immortal.  I think I will die in a US which has turned into a Latin American-style plutocracy, a land of profoundly unequal and stultified opportunity, with no prospect of a turnaround in sight.
Posted by New Deal democrat at 9:39:00 AM

My Three Weekly Review Are Up At XE

Bond Market Week in Review
Posted by Unknown at 7:54:00 AM